As Isabel Silva-Romero collects data for her research, the only sound she hears is her own breathing. Today, her lab is located six meters underwater, in a cove off the coast of San Cristóbal in the Galápagos Archipelago. She uses a metal tool to loosen algae patches from the rocky reef as another member of her team, Katelyn Gould, holds a device called CISME (pronounced “kiss-me”), which seals the algae into a chamber where it measures metabolic rates like respiration and photosynthesis. While they work, a raft of juvenile sea lions surrounds them and tries to engage them in play.

Silva-Romero, a UNC-Chapel Hill graduate student, lives for moments like these.

“I feel like one of the luckiest marine biologists of all because I am able to work in this paradise doing something that I love,” she says. 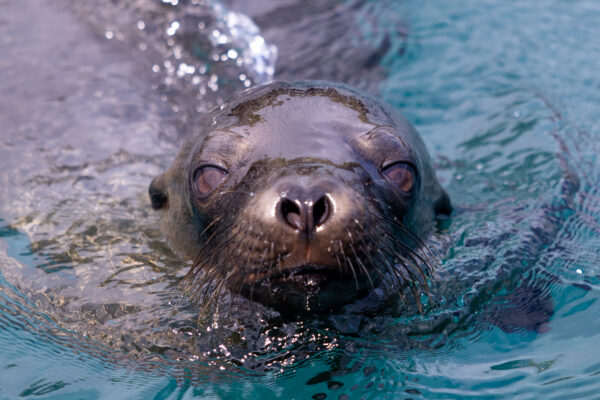 A juvenile sea lion investigates the boat used by the Bruno Lab to study macroalgal availability in the rocky reefs of the Galápagos. (photo by Andrew Russell)

Nearly two hours after they entered the water, Silva-Romero and Gould surface alongside John Bruno, the lab’s principal investigator at Carolina, and Margarita Brandt, a marine biologist at the Universidad San Francisco de Quito (USFQ). After loading the CISME instrument into the boat, Silva-Romero and Gould both let out a cheer and high-five in the water.

“Working underwater can be very challenging,” Silva-Romero says. “You have many restrictions, so you need to make sure that all the equipment is working, that you have a safety plan, and that you can finish all the work that you want to get done on the one tank of air you have. On that dive, everything went so smoothly, and we were excited about all the data that we had collected.”

When anyone asks Silva-Romero what she studies, her short answer is animals and plants that live at the bottom of the ocean in the Galápagos Islands. Silva-Romero’s field site is located at the Galapagos Science Center (GSC)  — a collaboration between the UNC Center for Galapagos Studies and USFQ that facilitates research, teaching, and outreach initiatives linked to the Galápagos.

She hopes to unravel how algae availability changes with temperature, the presence or absence of certain species, and upwelling — when nutrient-rich, cold seawater rises from below and replaces the diverging surface water. This will help predict how the macroalgae will behave in the face of a warming ocean.

The Bruno Lab has collected data since late 2019, but the project was suspended during the pandemic. Since restarting in the fall of 2021, they have discovered that herbivore species like razor surgeonfish and pencil urchins significantly impact algal biomass — the total organic matter of algae present in the reef at a given time.

They are still running trials to understand the interaction between temperature and nutrient availability to capture the effect of the warm season on the algal communities. They intended to do that this fall, but the Galápagos experienced a La Niña episode, so the water was abnormally cold.

Temperature is a driver of metabolic demand, especially in ectothermic or cold-blooded species like the Galápagos pencil urchin. As metabolic rates increase with the temperature, the urchins compensate by feeding more, resulting in an explosion in the urchin population — so much that they empty the reef of algae.

At some point, after depleting their primary food source, the population dynamics of pencil urchins would change. This can lead to a cascading effect across the food web. As the pencil urchin population declines, its primary consumer, the Mexican hogfish, will also decline, and so on. The goal of the Bruno lab is to understand these interactions.

“By knowing how this behavior might shift in the years ahead, it’s possible to speculate how the community structure and dynamics are going to change,” Silva-Romero says. “In the context of climate change, there are winners, and there are losers — and it’s crucial that we understand these changes.”

Silva-Romero grew up in Salinas, a coastal town in Ecuador. After high school, she earned a scholarship to attend college at USFQ in the Andean Foothills. After entering college as a math major, Silva-Romero realized on day one that it was not for her.

“My life has always been a series of last-minute decisions,” she admits with a laugh. “I had to decide which major to switch to, and since my closest friend in college was a biology major, I switched to that — and I eventually fell in love with it.”

Early on, Silva-Romero says she felt affirmed in her decision to pursue biology. USFQ provides an opportunity to engage in fieldwork across the country.

“It made me realize that I was very good at being in the field, collecting data, and then all the processes that happen after,” Silva-Romero says.  “I loved processing everything we collected, reading, writing, and getting to know what we were studying.”

In her third year, one of those field trips took Silva-Romero to the GSC to study marine biology, coral reef ecology, and coastal management. There she met Brandt and Bruno, who were recruiting undergraduates to join their team.

On her first day, Bruno asked about her interest in attending graduate school and the potential to have her on the team long-term. That was in 2018. What was supposed to be one semester has since stretched to years of studies. Bruno credits Silva-Romero’s success, in part, to her tenacity. 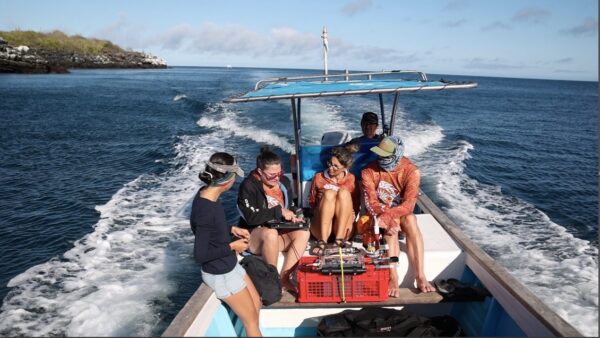 “Isabel has iterated her way around dozens of challenges, always with a positive mindset,” Bruno says. “Resilience and adaptability are key attributes of successful field biologists, and that can be very hard to instill in students. Isabel was already like this when I met her as an undergraduate student in Quito, Ecuador. So really, it’s her parents that deserve the credit!”

Despite this, Silva-Romero’s father initially opposed her choosing a profession in biology due to the lack of work opportunities in Ecuador. But she was able to ease his worries thanks to her work at the GSC.

“It’s turned out well for me because I found a career in Ecuador,” Silva-Romero says. “I’m conducting research that will eventually benefit my home country. They are extremely supportive now that they see what I’m doing.”

Silva-Romero also credits her father for introducing her to her other great passion. In 2014, during her first semester of college, she had to choose a sport as part of the first-year curriculum. They were looking at the list of options, and her dad saw SCUBA diving.

In February 2022, Silva-Romero earned the Laurel Clark Sea to Space Fellowship from the Woman Divers Hall of Fame. She’s using that money to upgrade her SCUBA gear for her research.

Silva-Romero’s dedication to her research is a result of support from her team. The lab is focused on conservation and marine ecology, and those goals undergird the research they do.

“Our aim is to produce high-quality scientific data that can be used by institutions to help come up with important strategies and conservation policies for the archipelago,” she says.

Silva-Romero believes her research is vital to moving forward in a world where a healthy ocean is critical.

“The ocean equals life. Having healthy oceans is crucial for human survival on the planet. Even the most remote communities are sustained by a healthy ocean.”

Isabel Silva-Romero is a graduate student in the Department of Biology within the UNC College of Arts and Sciences.

John Bruno is a professor in the Department of Biology within the UNC College of Arts and Sciences.