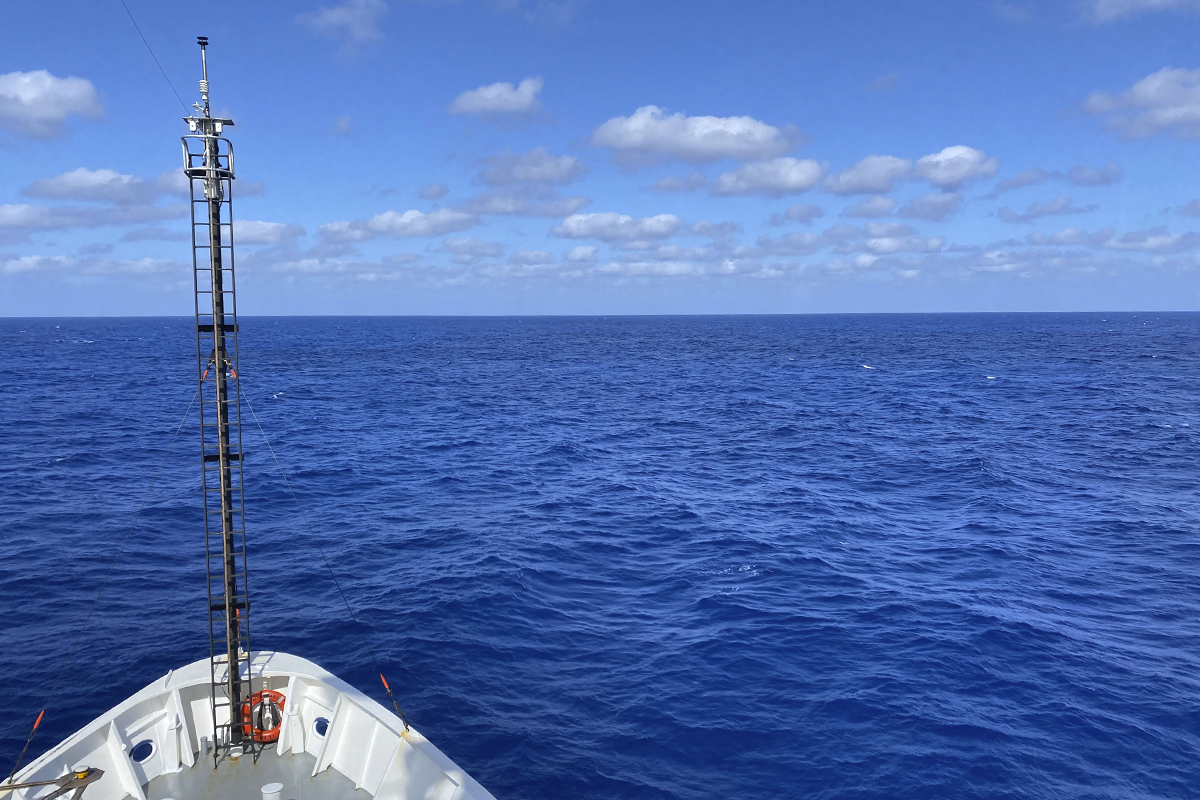 Laughter and cheers rang out over the side of the deck. The scientific crew of the RV Endeavor enthusiastically leaned out over the ocean clutching nets on the end of a nine-foot pole — a marine microbiologist’s version of “fishing.” We had finally found what we were looking for. 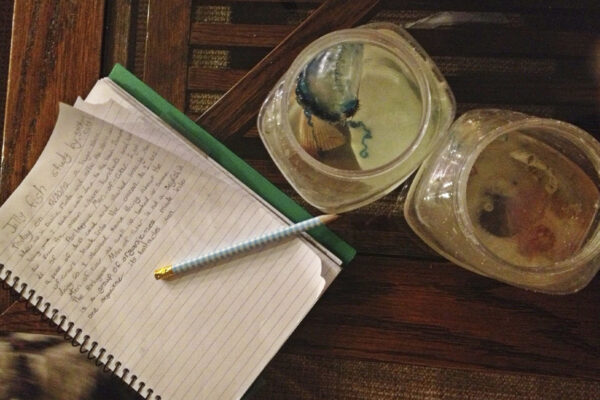 Our research group from the Arnosti Lab at UNC-Chapel Hill traveled with collaborators from the Max Planck Institute in Germany and the University of Southern Denmark on a 21-day adventure across the North Atlantic Ocean. Our goal was to study microbial activity in the deep ocean, which is important to the cycling of carbon. I had never been this far from shore for this long, but I was thrilled to be at sea.

As a kid, I could hardly wait for annual trips to visit my grandparents, who live in the panhandle of Florida. I was eager to journey down to the white sand beach because of my intense urge to explore the ocean. Sometimes we visited the Georgia Aquarium in Atlanta on the way. I still have the little journal where I kept “observational notes” and photos of the jellyfish I would discover along the shore.

I continue to pursue my unending love for the ocean through my environmental science major and minors in marine sciences and environmental justice at Carolina. It is a dream to have the opportunity to spend nearly a month at sea, funded by a UNC Summer Undergraduate Research Fellowship, learning how the ocean works and the secrets of the smallest organisms within it.

Our trip was broken up into four stations picked prior to the cruise based on water and microbial characteristics from the same or similar locations as previous cruises. The goal was to revisit these locations and collect samples to analyze trends seen from these bodies of water in the past.

One of our first missions was to find sargassum, a leafy green seaweed found in this region of the North Atlantic. We hoped to find bits of the algae enroute to our first station — the sargassum station. We started by traveling south, leaving port from Morehead City, and then headed north through international waters near Canada. Several of our experiments relied on catching this seaweed, and it was a joyous moment when we finally saw it drift into the net as the boat sped along. Shouts, cheers, and laughter drifted along the starboard side and into the wind. 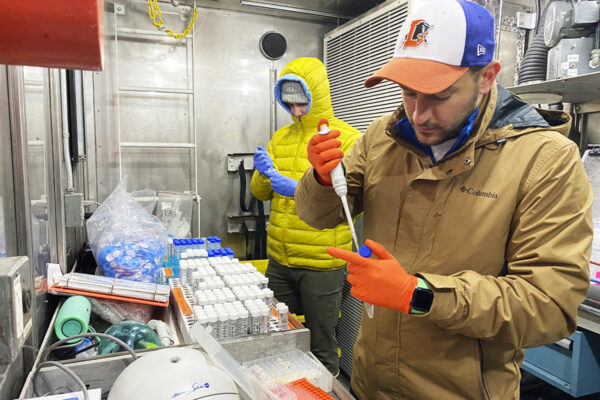 During my 21 days at sea, I spent much of my time in the main lab completing preparatory tasks. The rest of my time was spent in the cold lab, a metal box the size of a small moving van maintained at 4ºC to mimic deep-sea temperatures. I worked primarily with JP Balmonte, a former PhD student under our principal investigator, Carol Arnosti, and a current postdoctoral researcher at University of Southern Denmark. We were focused on understanding how the pressure of the ocean at various depths may inhibit or stimulate the activities of microbes and enzymes in the deep ocean.

To examine this, we used heavy metal tubes that we’d pressurize with vials of seawater spiked with various substrates and then depressurized them to measure activity. Using a large, yellow hand pump filled with water to create a vacuum, we pumped these vessels until they mimicked various pressure levels in the ocean up to the equivalent of almost 10,000 meters.

During our daily experimental setups, early 2000s pop music could always be heard coming from the cold lab on deck. We bopped our heads along to the music while spiking each vial with precision and loading them into their respective pressure vessels.

Each station required the use of a conductivity, temperature, and depth instrument (CDT), a round device surrounded by containers called Niskin bottles that could be triggered remotely to capture water at various depths. Toward the beginning of the cruise, Professor Arnosti asked me if I would like to learn how to use the CTD, and I eagerly said “yes.” The deployment lasted about four hours, during which I sat by the computer system and communicated with the “doghouse” — where the operator controls the wire attached to the CTD as it descends. Then, based on the graphs of the temperature, salinity, oxygen, and fluorescence that we could see on the computer system, I discussed with Professor Arnosti where we should capture water. 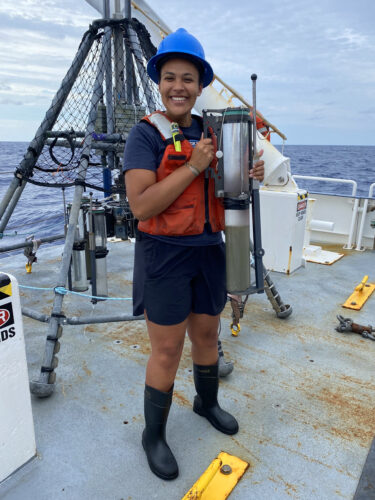 Our goal was to capture water in three locations — where chlorophyll was at the maximum, oxygen was at the minimum, and at the bottom of the water column. At each depth, Professor Arnosti jotted down notes about the data that the sensors in the CTD were broadcasting to our screen, and I clicked the “capture” button that sequentially popped each bottle.

After another two hours, we finally had our water — that’s when things got busy. Each research group, clad in hard hats and fluorescent orange vests, flocked to the deck with tubes and big plastic containers to collect the water they needed for their experiments. For fun, on several of the CTD casts, we attached a laundry bag brimming with decorated Styrofoam cups that would shrink with the pressure of the ocean and resurface as miniature versions. We were extra careful to ensure that we recovered every cup to bring back to family and friends at home.

We were also keen to know how these microbial communities behave under pressure in sediments at each station. At the first station, we succeeded in collecting mud in a multi-corer. Our initial success in collecting sediments was just as busy as the collection of water with the CTD. Scientists littered the deck towing cores to and from the cold lab.

The sediment deployment at the second station, though, took much longer, as the ocean floor was over 3,000 meters below us. After a quick nap in my cabin, I eagerly searched for JP to find out how much mud we captured. He jokingly traced the path of a tear down his face with his finger. Thus began a series of unfortunate events with our fruitless attempts to collect sediment.

We tried twice at each of the subsequent stations to deploy our multi-corer in increasingly angry seas with less and less success. On the last day of the cruise, we decided to try once more. In the late morning, we sent the coring device down to the deep, all fingers crossed and hearts hopeful. It felt like an eternity, but when the array finally arrived at the top, a single sediment core emerged with it. Mud at last!

Although each day started around 7 a.m. and might not end until after midnight, every moment was captivating. In between the intense hours of setting up experiments in the cold lab, I spent lots of time scrounging around in the unlimited ice cream freezer before climbing to the top of the boat, where the world was silent except for the occasional slap of a wave on the hull and the gently blowing wind.

The crew had set up a pair of hammocks on the top deck, overlooking the water. I used them often and felt like I was on top of the world, rocking gently with the vast ocean. There is something incredibly rooting and calming about being at sea that makes you feel in touch with the earth.

Although we were lucky to have gorgeous weather for much of the cruise, the farther north we ventured toward Nova Scotia, the colder and more threatening the weather became — until one day its threat became a raging storm. For about three days, we sat with the bow facing the waves. Unable to go out on deck to the cold lab, we had to halt progress on our experiments. It was sort of thrilling being tossed about, but it was also daunting that we were entirely at the will of the ocean.

One day, we came across an unmarked sailboat hundreds of miles from shore. The captain blew the R/V Endeavor’s horn to alert any potential stranded people on the boat, but we did not receive any response. After a conversation with the coast guard, we learned that the S/V Critical Window had been abandoned in Florida after its sailors ran into troubling weather. The Gulf Stream had carried the vessel north as though to remind us that we were only visitors within this uncontrollable terrain.

When the weather finally cleared, we began to head south again, spending each day getting to know the unique quirks of the microbes we had brought up on deck with us. During our transit from international waters near Canada to the Massachusetts coast, pods of whales came to visit us at sunrise and dolphins at sunset. One afternoon, we were even visited by an ocean sunfish.

During my trip, I realized how small we all are. We are at the will of Mother Nature, whether we like it or not. Because of this, it is so important to understand how our planet and our oceans work to keep us alive and provide for us every day. There is so much we don’t know and so much that we are still discovering. As humans, we must learn how our planet functions and takes care of us so that we can ensure that it continues to do so. We often forget that the health of our oceans isn’t just important to the survival of the species within it, but the health of humanity.

This project was funded by the National Science Foundation on grant number OCE-2022952 and the cruise was on board the RV Endeavor Cruise 683.