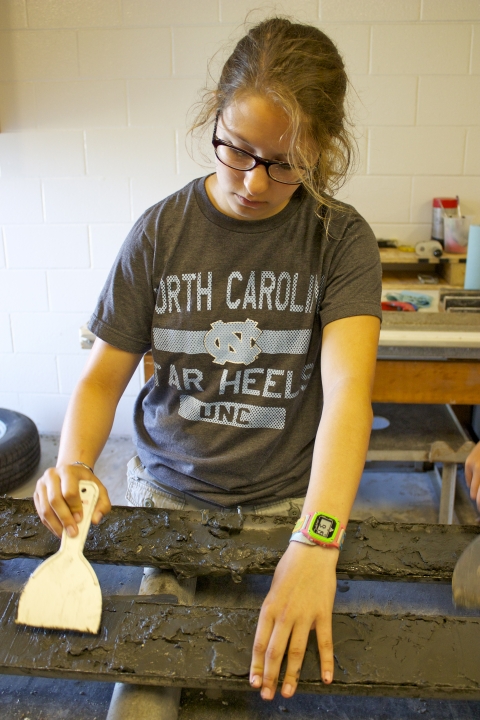 Photo by Emily Woodward
As part of the Chancellor’s Science Scholars program, Anna Atencio spent her summer at the UNC Institute of Marince Sciences. Here, she smooths out a sediment core sample in the Rodriguez lab.
By Mary Lide Parker
Earth

When she was in second grade, Anna Atencio’s parents gave her a microscope. “I don’t think I ever put it down,” she says. “I always wanted to be a scientist—right from the start. I had no idea that you could grow up to be something that didn’t involve science.”

Atencio is now a sophomore at UNC, majoring in geochemistry with a minor in marine science. She is also a member of the first class of Chancellor’s Science Scholars, a new scholarship program that awards $10,000 per academic year to undergraduate scientists planning to pursue a masters or PhD in their chosen field. But Atencio almost didn’t come to Carolina at all.

While attending the North Carolina School of Science and Mathematics, Atencio was certain she wanted to go to NC State and major in engineering. The daughter of an aerospace engineer, she was eager to follow in her father’s footsteps. “I was really influenced by him and his job, so I didn’t really consider other options at that time,” Atencio says. But she still applied to multiple schools, and a few months later a letter came from UNC, offering her a spot in the Chancellor’s Science Scholars Program.

Atencio started thinking about possibilities outside of engineering. She talked to her parents about her options, and they encouraged her to accept the scholarship from UNC. If she didn’t like the program or UNC, they said she could always transfer the following year.

“Well, I tried it and found out exactly how much I love geology and marine science. I’m sticking with it,” Atencio says. “I’m so glad I came to UNC.”

The summer before they officially start at UNC, scholars in the program take classes on campus together—it’s an opportunity for them to transition into college life and bond with each other. “I made a lot of friends,” Atencio says. “And now, whenever we see each other on campus we stop and talk about science. I love being a part of the Chancellor’s Science Scholars because with them, I can nerd out and tell them about the coolest parts of my research.”

In addition to making friends, Atencio and the other scholars worked together to get into the swing of research on campus. Atencio quickly found a home in Brent McKee’s lab in the Department of Marine Sciences, where she’s currently studying how oyster reefs and marshes are reacting to sea-level rise. She’s collecting data on how fast marsh grasses are growing and how much carbon they sequester.

“If the marsh doesn’t grow fast enough to keep up with sea-level rise, then the grasses drown and all that carbon goes back into the ocean,” Atencio says. That influx of carbon leads to warmer surface temperatures in the ocean and contributes to the greenhouse effect. When McKee asked Atencio if she’d like to spend the summer studying at the Institute of Marine Sciences in Morehead City, Atencio said yes immediately.

“I really enjoyed the fieldwork—taking the boats out and collecting the cores,” she says. “I had been working with these cores for about a year prior to this summer, but I had never seen them collected, so I was excited to see how the process works.” The cores Atencio refers to are long columns of mud that researchers extract from marshes to gain information about the health and age of the marshes.

Back in the lab at IMS, Atencio and others in the Tony Rodriguez lab divide the cores in half and photograph them. Half of the core is archived for future use, while the other half is cut into five-centimeter increments so the researchers can examine its history. The core samples are dried in an oven, and then the sediment is ready for grain-size analysis. “I was already pretty comfortable with standard lab procedure,” Atencio says. “But what I really gained this summer was figuring out what it’s like to work an eight-to-five job. I had coworkers and had to be at specific places at specific times, versus the flexibility you have when you’re a student in a lab.”

The hands-on lab work and fieldwork (and spending the summer near the beach) were obvious perks of conducting research at IMS, but Atencio’s favorite part was the community. “I immediately felt very comfortable there. Everyone wanted to talk to me and know who I was,” she says. “I went out in the field on my second day, and I had no idea what I was doing. Someone handed me a cluster of shells, and I had to identify the oyster and I didn’t know which one it was. I know what big oysters look like, but these were tiny. But the grad students pointed it out to me—I had no idea that this tiny shell was an oyster too!”

While Atencio is still two and a half years away from graduating, she is certain she wants to stay in research. “I just want to continue to find new information,” she says. “I like researching things that will make a difference.”

Find out more about the Chancellor’s Science Scholars program at http://chancellorssciencescholars.web.unc.edu/