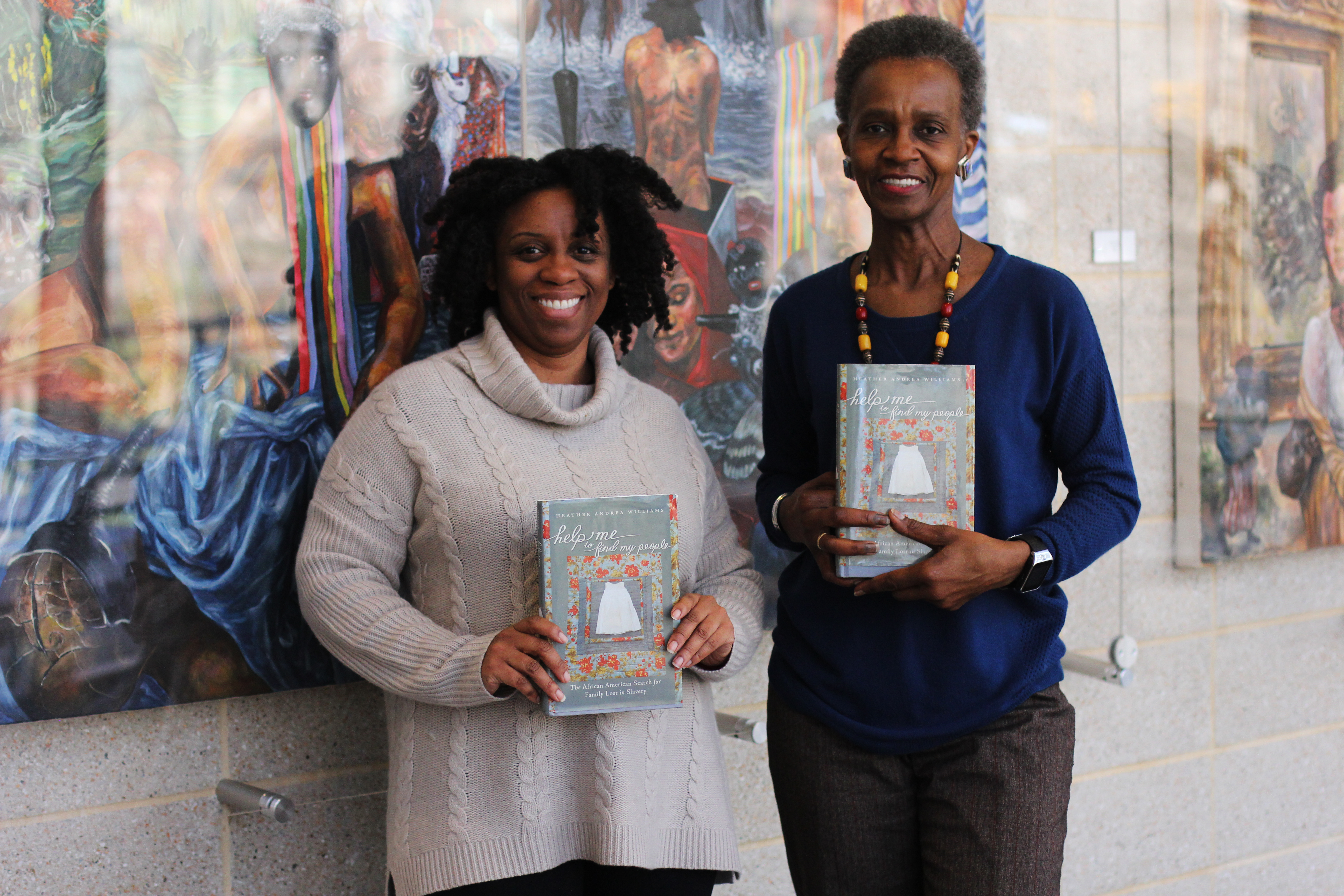 Photo by Alyssa LaFaro
The book “Help Me to Find My People” by former UNC-Chapel Hill history professor Heather Williams inspired professors Tanya Shields and Kathy Perkins to develop an event to engage with feminist discourses of home. “Telling Our Stories of Home” will take place March 31-April 8 at the Sonja Haynes Stone Center.
By Jessica Porter
Creativity

As Kathy A. Perkins turned the last page of “Help Me to Find My People,” she opened a new chapter of her life. The text, written by former UNC-Chapel Hill History Department Professor Heather Williams, is a history of newly emancipated African Americans trying to reunite with their families after the U.S. Civil War.

“It was just fascinating,” Perkins, a dramatic art professor, says. “I read it and thought, This is amazing. This has to be on stage.” Perkins focuses on women from Africa and African diaspora communities — or communities built from descendants of West and Central Africans enslaved and sent to the Americas, the United Kingdom, and other countries. She aims to expose playwrights with similar interests to a wider audience, which is one of the reasons why she and colleague Tanya Shields constantly discussed this book.

A professor of women’s and gender studies, Shields studies the gendered and historical process of plantation systems. Her current work looks at women plantation owners in the Caribbean and the American South. She often integrates art and activism into her research.

From the inception of the project, Perkins and Shields garnered the support of leaders at UNC and from the surrounding community — but they had no idea how much this project would grow.

Nearly two years later, the duo will host a six-day long conference-festival called “Telling Our Stories of Home.” The project will bring together faculty, activists, and performers to workshop, present, and engage with feminist discourses of home.

Perkins emphasizes that the African experience expands across more than just the continent itself — which is why she and Shields are flying in guest scholars native to places like Haiti, India, Puerto Rico, and Brazil for the event.

The topics of discussion for the panels are equally wide-ranging. Throughout the program, participating scholars will talk about things like living in a war zone in Rwanda and gentrification in our backyard of Durham. To cap the project, there will be a reading of “Torn Asunder” — a stage-adaptation of “Help Me to Find My People” created by Perkins and OBIE award-winning playwright Nikkole Salter.

Having a varied background and unique passions is important in forming the narrative of home from the female perspective, Shields says. Historically, this narrative has been shaped from the male point of view as men have made the decisions around home. With this project, Shields wants to share the experiences of women who have had to bear the brunt of these decisions — something she believes will open up a different understanding of the world.

Perkins echoes the need for change in the perception of women in diaspora communities. At the beginning of every semester, Perkins gives each of her students a slip of paper. She prompts them to write down the first three things they think of when they hear the word “Africa.”

“Even in 2016, some students think primarily of poverty, flies around their mouth, lions,” Perkins says, chuckling. “They never think of a woman being educated or running a business or anything like that, so we are trying to help them and others expand their knowledge of what women in the diaspora are like.”

Show me the money

In December 2015, the project was awarded a Humanities in the Public Square Grant from the National Endowment for the Humanities. This grant aims to connect scholars and the public in discussion about today’s pressing issues. Shields’ application for the conference-festival received $113,939 for support. The grant gives the project an edge, she says, allowing for long-term impact that reaches beyond the university.

Rather than just putting on a conference-festival for the campus, the event will engage the county, region, and state. “It is important because we are sharing these funds with local community groups who will have these conversations outside of the conference,” Shields says.

A portion of the grant will be awarded to the North Carolina African Diaspora Fellows Program. An alliance between UNC and Duke, the program helps teachers in the public school systems integrate lessons on the African diaspora into their classroom.

Perkins believes the continuation of programs like this through the NEH grant can have long-term impact in the community. “It is one of those areas where you have to work as a group,” Perkins says. “Theatre can foster communication.”

“We really hope that the conference will have a ripple effect,” Shields agrees.

Kathy Perkins is a dramatic arts professor and has written and co-edited six anthologies of plays focusing on women from African. She has received numerous awards, including the Ford Foundation, Fulbright, and United States Information Agency. Perkins has designed lighting for productions throughout the U.S. and abroad.

Tanya Shields is the Director of Undergraduate Studies in the Department of Women’s and Gender Studies and a recipient of the Carolina Women’s Center Faculty Fellowship. Her book, Bodies and Bones: Feminist Rehearsal and Imagining Caribbean Belonging examines the ways rehearsing historical events shapes belonging to the region.

“Telling Our Stories of Home” will take place March 31-April 8. Some of the main events include a day of panels and performances on Thursday, March 31; a family festival with performances, crafts, and more on Saturday, April 2; and the inaugural reading of “Torn Asunder” on Thursday, April 7.