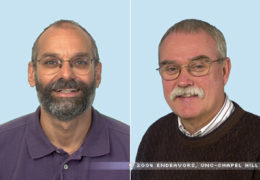 Photo by UNC Medical Illustration and Photography.
An estimated thirty million people in Africa carry HIV. In the battle against the virus, Carolina researchers have launched two new efforts — the first treatment study funded by the National Institutes of Health (NIH) in Africa and the first trial in South Africa of a vaccine that contains genetic material from the HIV strain most prevalent in that country.

There are two stories in this series: