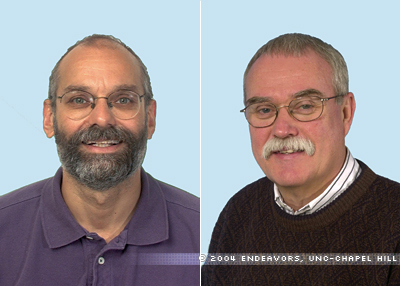 An estimated thirty million people in Africa carry HIV. In the battle against the virus, Carolina researchers have launched two new efforts — the first treatment study funded by the National Institutes of Health (NIH) in Africa and the first trial in South Africa of a vaccine that contains genetic material from the HIV strain most prevalent in that country.

In the treatment study, Charles van der Horst, professor of medicine at UNC-Chapel Hill, has been collaborating with Ian Sanne, director of the University of the Witwatersrand’s AIDS Clinical Trials Unit. The forty-eight-week study will compare the effectiveness of an antiretroviral drug cocktail given once a day in the presence of a health care worker with treatment taken twice daily by the patient without observation, van der Horst says. Lack of compliance with the medication regimen can result in viral mutation and ultimately in the failure of treatments.

The study will also help determine whether monitoring patients’ treatments in this way is cost effective. Patients will be monitored for their blood virus levels during the treatment and treated free of charge for four years after the trial.

The vaccine study, which began in July 2003, is also being conducted in the United States. The initial human trials are designed to test the safety of the vaccine and will last about two years. The vaccine contains a weakened version of the Venezuelan equine encephalitis virus (VEE) as a vehicle to carry a harmless gene from a South African HIV strain. Because of the absence of the infectious genetic material required to reconstitute live HIV or the VEE virus, the risk of infection is negligible.

The vaccine works by training killer T-cells to identify and remove infected cells. Killer T-cells are induced by expressing a major protein normally found in the HIV particle “Gag.” The vaccine itself was developed by Robert Johnston, professor of microbiology and immunology and director of the newly established Carolina Vaccine Institute; Nancy Davis, research professor of microbiology and immunology; and other U.S. and South African scientists. AlphaVax, a Carolina biotechnology spin-off, holds the commercial license for the VEE technology and has contributed to the development and manufacture of the trial vaccine.

Historically, treatment studies have helped shape government health policy. Officials in the NIH say that treatment studies show their commitment to fostering HIV prevention and treatment research throughout sub-Saharan Africa. Says Edmund Tramont, director of the AIDS division at the National Institute of Allergy and Infectious Diseases (NIAID), “One mechanism to accomplish this is through productive collaborations between U.S. academic medical centers and partners in Africa. The collaboration between the University of North Carolina faculty and the faculty at the University of the Witwatersrand has been very productive, leading to multiple projects funded by the NIH.”

Van der Horst is also a visiting professor at University of the Witwatersrand in Johannesburg, South Africa. Among the developers of the vaccine are Ronald Swanstrom, professor in the Department of Biochemistry and Biophysics and director of the UNC Center for AIDS Research; Jeffrey Frelinger, professor and chair of the Department of Microbiology and Immunology; David Montefiore of Duke University; Phil Johnson of the Children’s Hospital Research Foundation in Columbus, Ohio; and South African scientists Carolyn Williamson, Lynn Morris, and Salim Karim. The early development of the vaccine is supported by the U.S. Army Research and Development Command, the NIAID, and the International AIDS Vaccine Initiative. The trial itself is being conducted by the HIV Vaccine Trials Network, which is funded and supported by the NIAID.

There are two stories in this series: