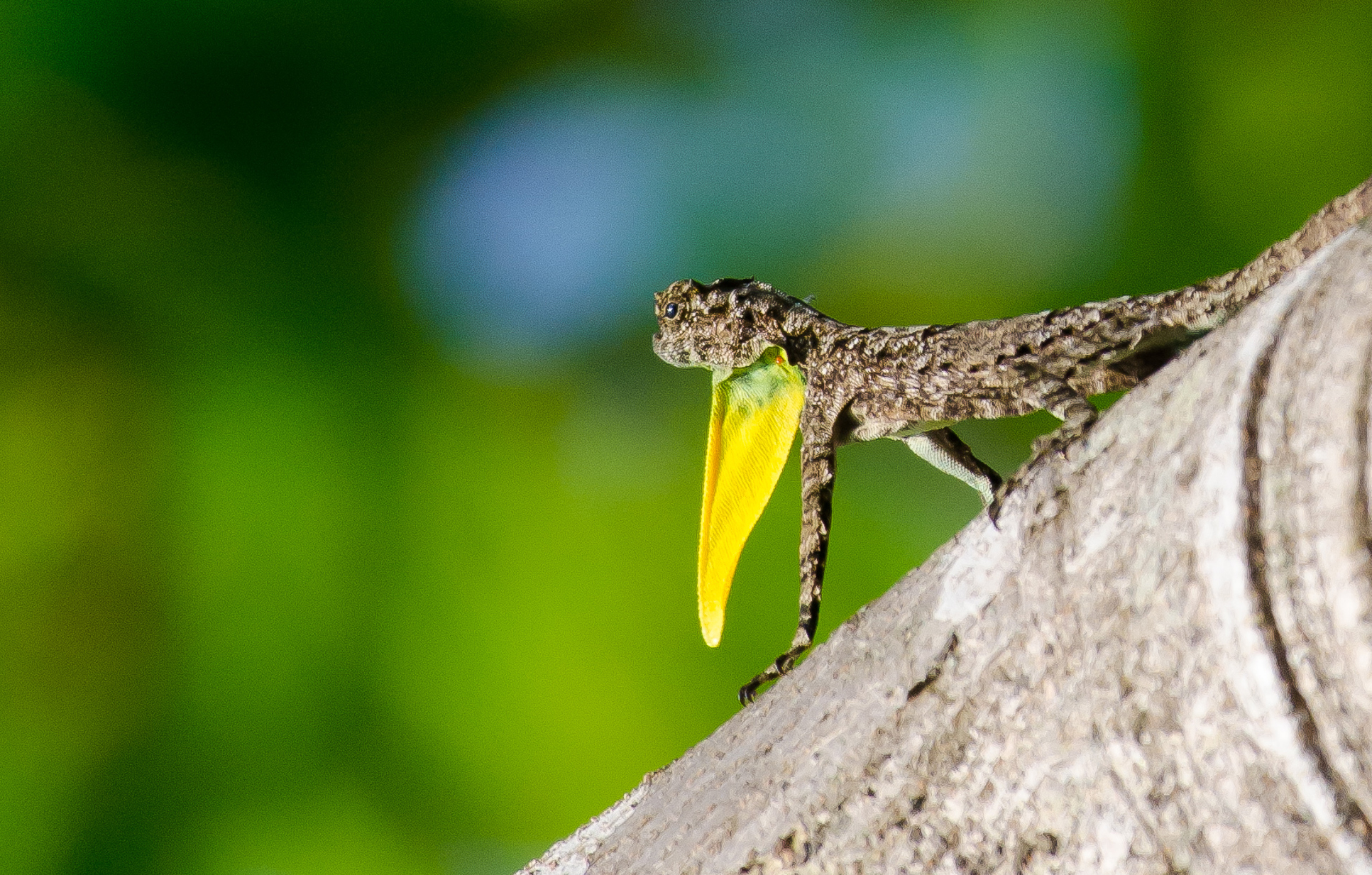 When biology graduate student Pranav Khandelwal set out to understand how gliding lizards manage collision-free flight in the cluttered Indian rainforest, he was taking a huge leap of faith.

During the university’s spring break in 2015, his lab director, Tyson Hedrick, gave him 10 days to travel to India, arrive at a remote field site, find gliding lizards, record their flights, and get back to campus in time to teach his Biology 101 lab. Overall, he had just five days to collect data.

“It was definitely a big risk that we were taking, going all the way there for just a few days and hoping that we would find lizards,” Khandelwal says. “The minimum standard was just finding them. We had no idea whether we’d be able to collect enough data to actually publish a paper.”

Hedrick, a UNC biology professor, was aware of the project’s risks when he sent Khandelwal on the 22-plus-hour journey from Chapel Hill to the Agumbe Rainforest Research Station in Karnataka, India.

Analysis of gliding flight is crucial to helping scientists like Khandelwal and Hedrick better understand the evolution of powered, flapping flight and practical aerodynamics. Understanding how animals produce and control movement is a central goal of the Hedrick Lab. Studying bioflight and animal locomotion, like that of the gliding lizards, goes beyond the animal kingdom, offering potential applications to human technology and engineering.

While traditional laboratory studies pose numerous roadblocks for animal behavior studies, field research has its own challenges. The lizards could be absent, the cameras could fail, or customs could confiscate crucial equipment.

“It was quite a bit of good luck in a row to be able to get those recordings in the first place,” Hedrick says. “And then it was a lot of hard work on Pranav’s part.”

What resulted from that hard work, fortunately, was a first-of-its-kind study that revealed how gliders maneuver collision-free through the natural environment. The data Khandelwal collected revealed previously unknown abilities of the lizards to strategically maneuver and plan their flights even before take-off.

“This is something that, maybe if you asked somebody, they would guess that all those capabilities would be there, but this is the only solid evidence that those abilities exist,” Hedrick says.

Gliding lizards, also known by their genus, Draco, have a unique wing structure compared to other gliders. While species like flying squirrels and sugar gliders have anatomies similar to Red Bull parachute outfits, with membranes that connect from wrist to ankle, the lizard’s wings are an extension of the ribs, tucked in at rest and flared out like a wingsuit during flight. Khandelwal compares the Draco’s wings to a Batman suit.

“The gliding lizards are sort of well-known in this community,” Hedrick says. “They’re cool and not quite as scary as the gliding snakes.”

Gliding flight is not like the flapping flight of birds or bats, whose wings give them the power to generate thrust, gain altitude, and easily shift around obstacles without losing lift. In absence of the ability to generate power, a gliding flight is all a matter of controlling descent. Gliders launch into the air with a fixed amount of energy to get from point A to point B, and any obstacles in their way will reduce that fixed energy and lose altitude.

The fact that gliding lizards, perfectly at home in the dense Indian rainforest, are able to glide 10 to 15 meters without falling to the predator-ridden forest floor, indicated to Khandelwal and Hedrick a level of planning and biomechanics that could only be understood by studying the animals in their natural habitat.

Luckily, Khandelwal arrived at the site during the reptiles’ mating season, and the males were extremely active. Additionally, the Agumbe Rainforest Research Station is the site of a former areca nut tree plantation. The tall, thin trees — similar to coconut trees — provided the perfect habitat for the lizards. The trees are slightly more spaced out than the surrounding forests, but still cluttered enough to provide obstacles.

“I saw them doing amazing maneuvers around trees to basically negotiate and navigate the environment,” Khandelwal says.

He recalls watching two lizards jump and chase one another from tree to tree, until one caught the other and brought them both crashing down to Earth. Other times, he watched as a male doggedly pursued a female lizard, only to be whacked by her powerful tail.

The Hedrick Lab’s work documenting animal flight has taken place in both the laboratory and the field, but the lab has produced a particularly large series of papers and projects on flight in the natural world using the kind of camera-based measurements Khandelwal applied.

Ten years ago, Hedrick developed this camera-based toolset that could record animals with a laboratory standard of accuracy while leaving them undisturbed in their natural world.

“If you catch a flying squirrel and bring it into the lab and start feeding it, it quickly becomes a really chubby, unmotivated squirrel, and it’s gliding performance, well, sort of drops off a cliff,” he says.

For Hedrick, Khandelwal’s research trip was, in part, a test of whether the setup could accurately record highly-quality video recordings, flight trajectories, and animals behaving in the natural world, in the middle of the Indian jungle. 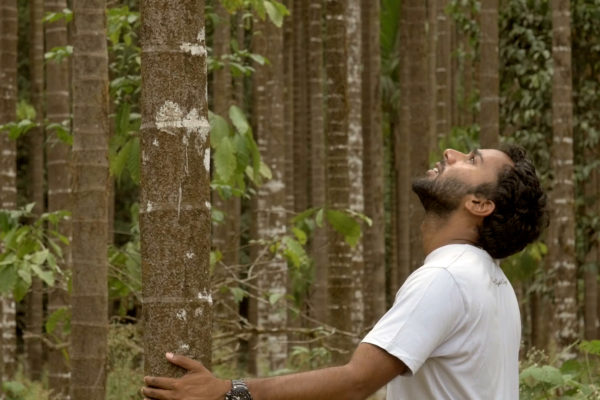 For five days, Khandelwal stood among the areca trees with his binoculars pointed upward, waiting for a yellow flash. Draco dussumieri has yellow flaps under their chins called dewlaps. These stand out on their otherwise brown and grey skin, and the males flex them to signal dominance and territoriality. When Khandelwal spotted a male dewlapping vigorously and climbing upward, he set up the GoPros.

“The biggest moment of success was looking at the first video and saying, ‘Wow we did actually get this to work,’” Hedrick says.

The cameras captured high-speed video of the lizard’s gliding trajectory in its natural environment.

“Right then, I knew we had something that nobody else had any sort of comparable data to, and that we were going to be able to make quite a bit of progress in understanding how gliding works, not just the mechanics, but how it actually works for the organism in the environment.”

At first, the project only sought to quantify the lizard’s glides: distance, height lost, angle, and velocity acceleration. Using the portable camera set-up of three specialized GoPros, Khandelwal and his field assistant spent their days moving around the areca nut plantation, catching the full volume of flights.

“The mindset was you’ve got five days, get whatever you can,” Khandelwal says.

But when Khandelwal returned to Chapel Hill and began to sift through the data, he and Hedrick realized they had much more than they thought. The videos captured the lizard’s surrounding environment to a degree that the scientists could map and analyze all possible glide paths, and subsequent areca nut obstacles, for every jump.

So, their goal changed. They hypothesized that, given that the lizards were working with a fixed energy budget, they would need to visually plan their path. With the available metrics, they observed the use of multiple visual planning strategies that demonstrated an impressive level of mental processing and maneuvering capabilities by the lizards.

For example, the lizards chose glide paths with the fewest obstacles and the most direct route to their target tree to lose the least amount of speed and altitude as they maneuvered through the air. They also jumped at steeper angles when their target tree was at a further distance.

Additionally, the lizards landed using controlled collision approaches, where they angled their bodies to slow down before landing, similar to the way that high-speed jets use parachutes. Their ability to gauge the size and speed of an approaching target is like a driver’s ability to intuitively know how much they need to press the brakes to avoid hitting a stopped car.

The results were so pleasing that a research team led by Khandelwal returned to the research station in 2017. This time, though, the plan wasn’t nearly as risky. The team, including Khandelwal, dedicated two-and-a-half months to studying the lizard’s overall flight mechanics. This trip will hopefully yield a second paper on the subject.

Khandelwal plans to graduate soon, but won’t forget his time with the acrobatic reptiles. He recalls how the researchers there were isolated from the outside world. They contended with poor mobile reception, limited internet connectivity, pit vipers and cobras, and no electricity besides a few solar panels. Khandelwal loved every minute of it.

“It was probably the best few months of my life there,” he says. “You can absorb what’s happening around you. You can literally hear every insect, every bird. At the research station, you interact with people you are working with on a level at which you would not normally. It was an experience which I think, for me, will be hard to find again.”

Pranav Khandelwal is a graduate student in the UNC Department of Biology within the UNC College of Arts & Sciences.

Tyson Hedrick is a professor in the UNC Department of Biology within the UNC College of Arts & Sciences.