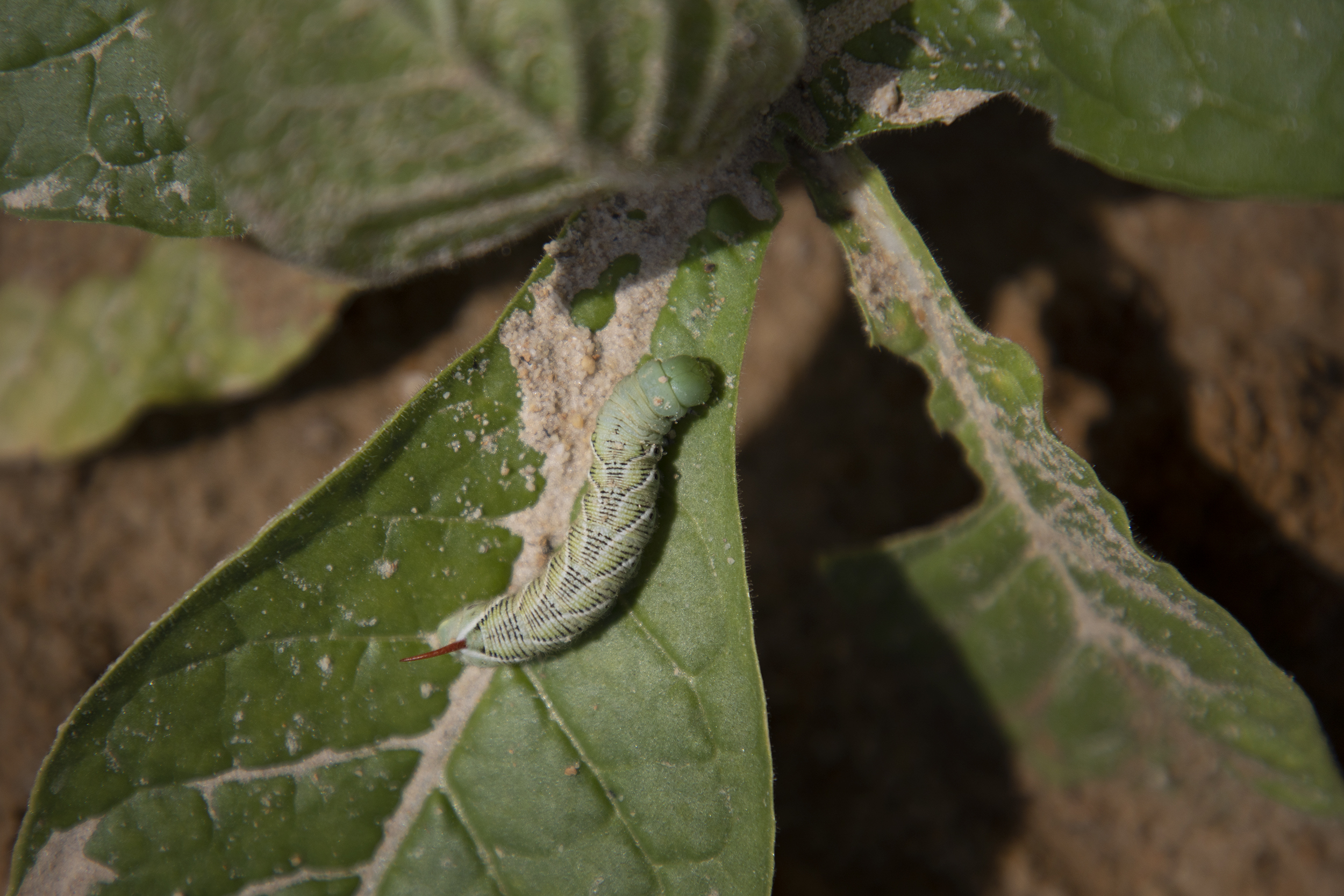 A tobacco hornworm caterpillar sits on a tobacco leaf at the North Carolina Department of Agriculture and Consumer Services’ research station in Clayton, NC.
By Megan May
Earth

Katherine Malinski is a caterpillar detective. As she walks between rows of tobacco plants, she looks for clues of hornworm caterpillar activity. Tobacco is a host plant for hornworms — the moths lay their eggs on the leaves, which provide food for the caterpillars and serve as a refuge as they develop.

Seeing the remnants of a caterpillar feast, Malinski carefully turns over each leaf. Soon she finds what she is looking for: a tiny hornworm caterpillar. “Found another one!” she exclaims as she pulls a large petri dish from her waist pack, gently picks up the insect, and places it in its temporary home.

Malinski is a PhD student in Joel Kingsolver’s evolutionary biology lab. Kingsolver and his students study how insects and plants respond and adapt to conflicts in the natural environment. They focus on climate change, but also topics like invasive species and managed ecosystems. Much of their work is centered on butterflies and moths.

Currently, most of their research explores how increasing temperatures affect the relationship between a hornworm species (Manduca sexta), a parasitoid wasp (Cotesia congregata), and two hornworm host plants, tobacco and devil’s claw.

“All the work in our lab integrates field studies, laboratory experiments, and mathematical models to investigate insect responses to complex environments,” Kingsolver says. “Insects and temperature are great for that because we can do field studies to explore what we think are important factors and then bring them into the lab and mimic those conditions to better determine what those key factors are.” 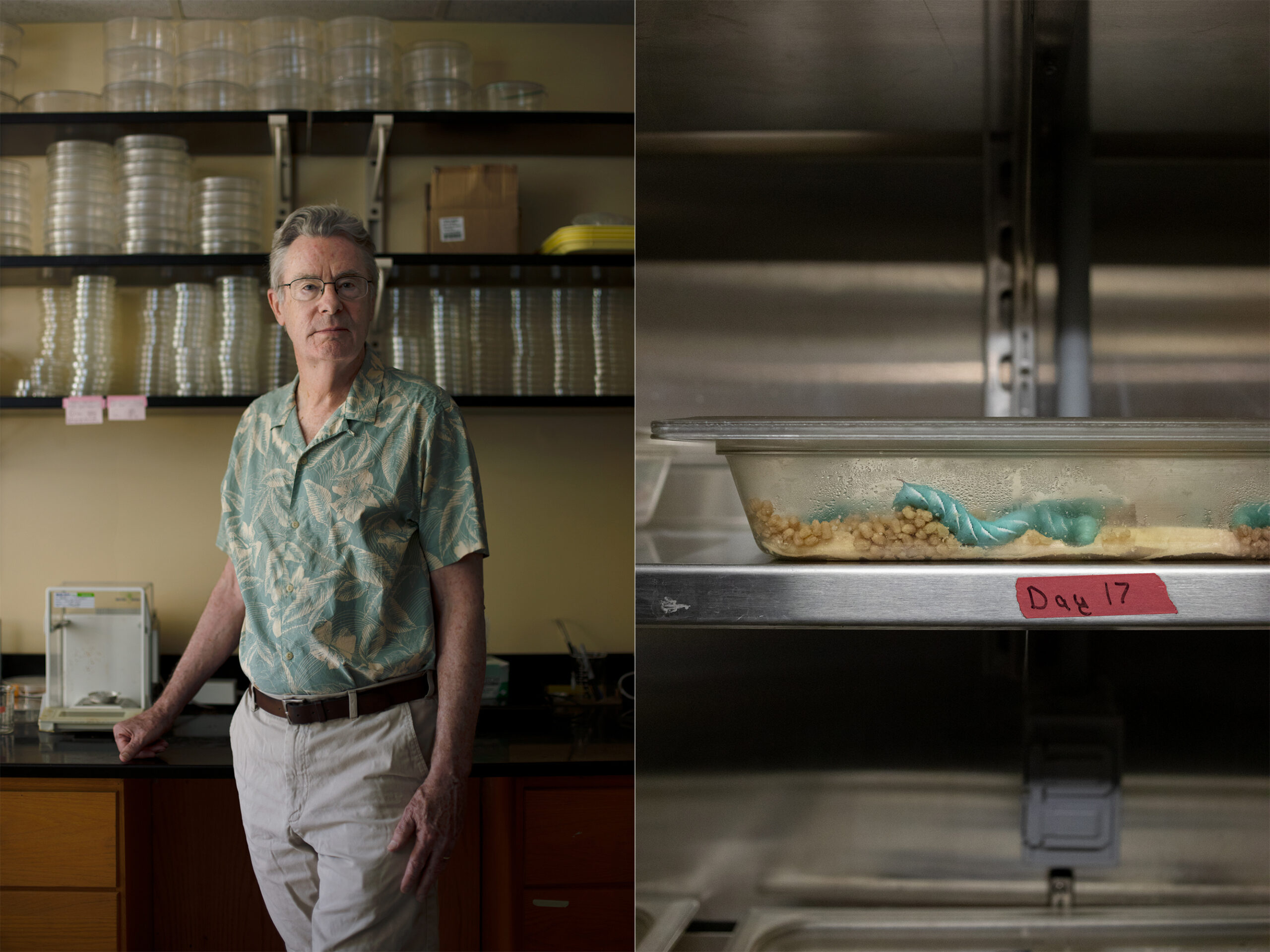 About 15 years ago, the lab began studying devil’s claw — an introduced plant that is now a host for some species of hornworms. “It’s really surprising that some hornworms use this as a host plant because it’s a completely unrelated plant than their typical hosts, like tobacco,” Kingsolver says. “Initially, we were interested in why this agricultural pest shifted from one plant to another.” Over time, the lab began building upon this relationship layering in other complexities like the role of the parasitoid wasp and climate change. 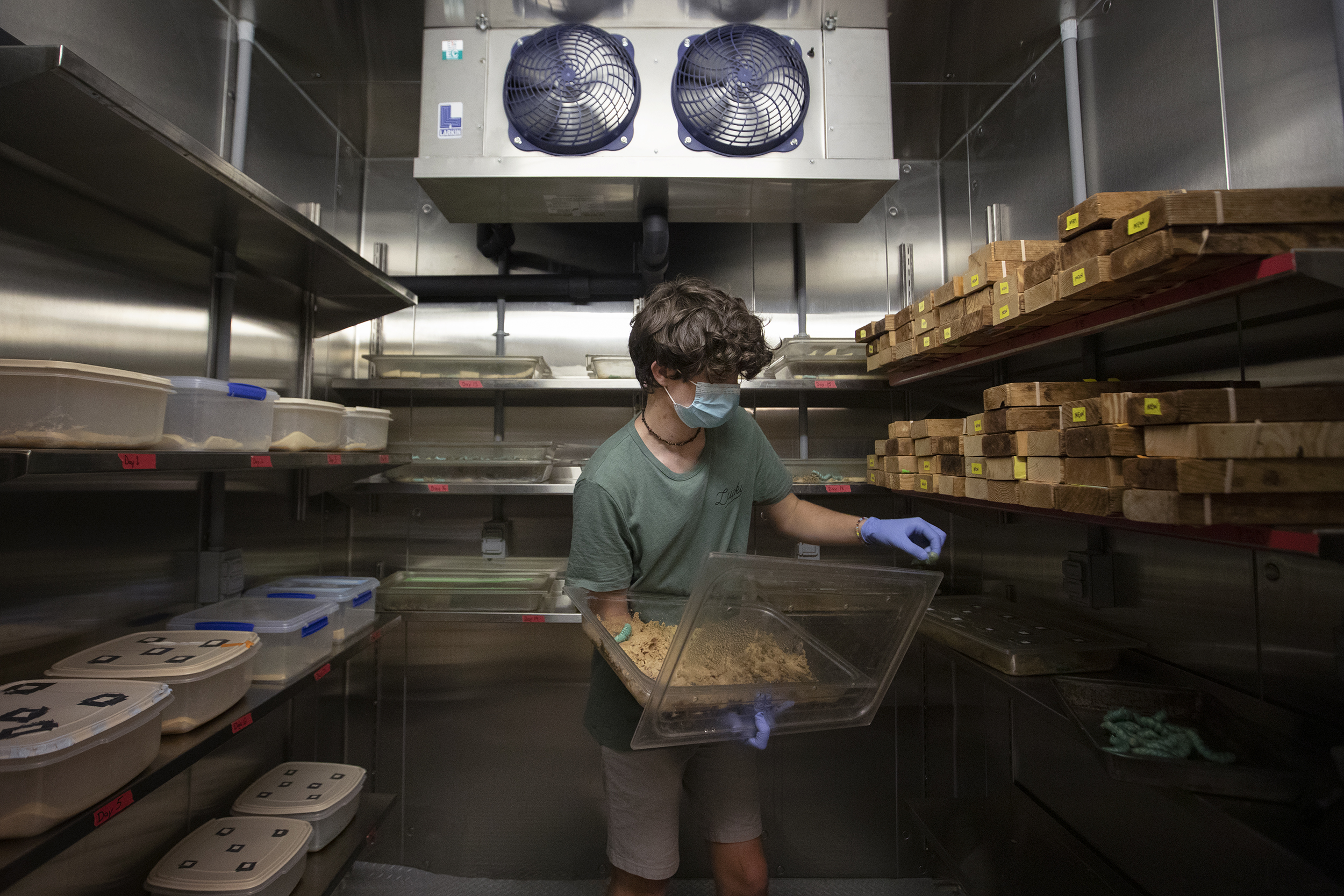 Research technician Tyler Pereira cares for caterpillars and pupae in the lab. Hornworms have long been a model system for researchers. They are easy to care for, grow quickly, and are large — making them ideal for physiological studies. “There’s a lot of things you can do with a hornworm that you can’t do with a fruit fly just because of their size,” Kingsolver says. 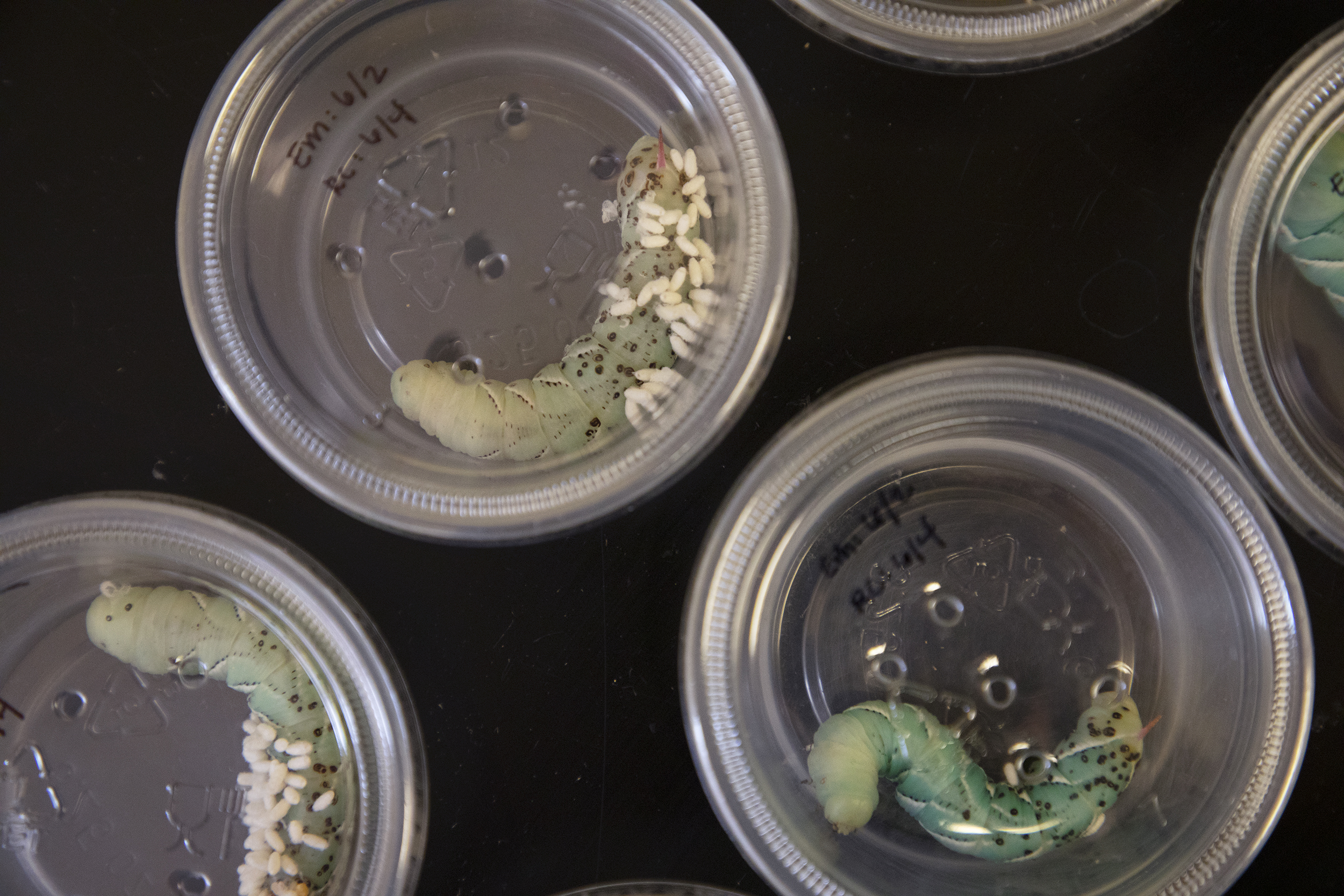 Parasitoid wasp cocoons are seen on caterpillars raised in the Kingsolver Lab. Most moth and butterfly species have at least one species of parasitoid that can infect them at different stages of life. This particular wasp injects its eggs into the caterpillar. Once hatched, the wasp larvae make their way through the wall of the caterpillar’s body, form cocoons, and develop into adults. 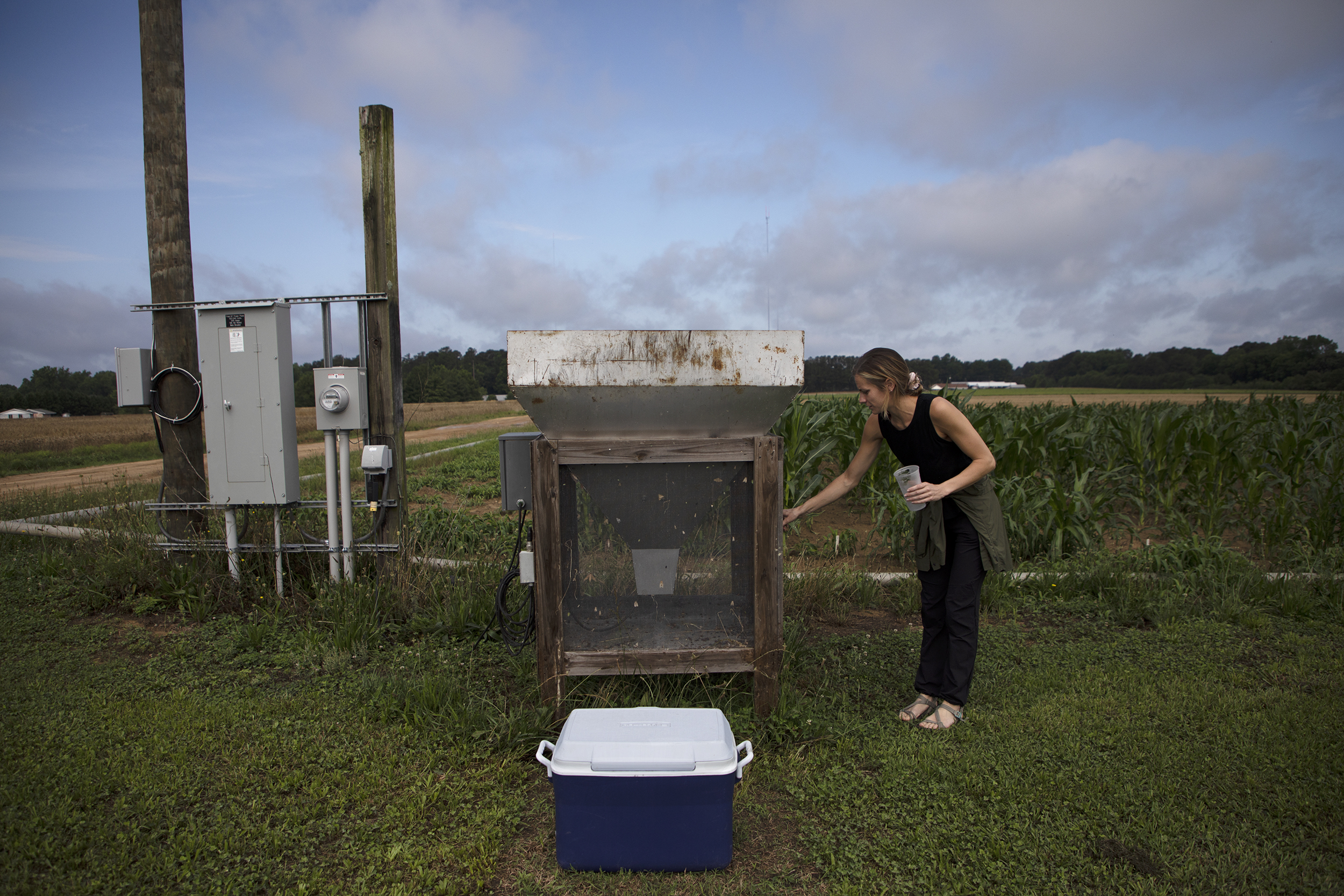 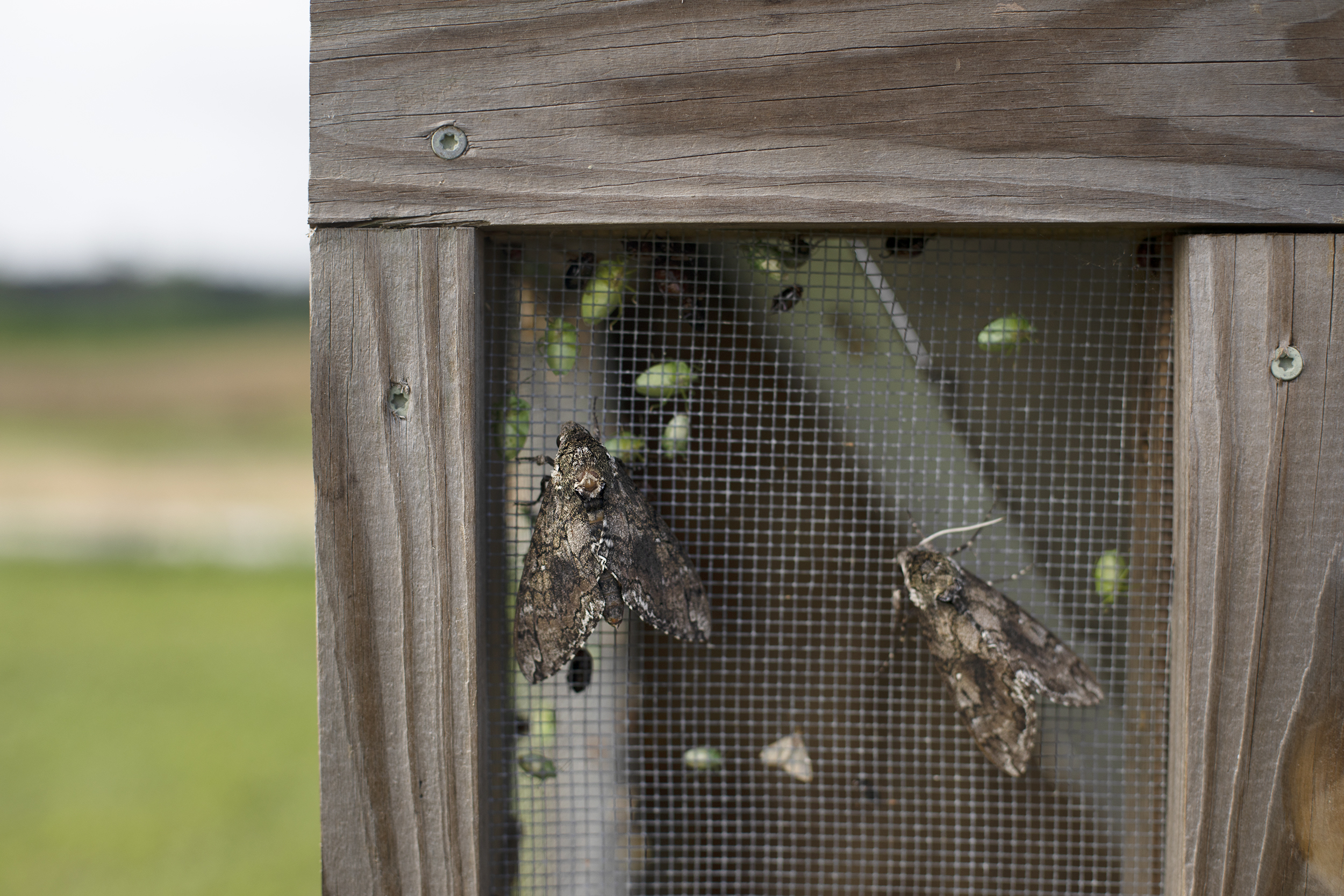 When the female parasitoid wasp lays her eggs in a caterpillar, she also injects a virus that suppresses the caterpillar’s immune system and protects those eggs. At varying degrees, the wasp, her eggs, and larvae are more sensitive to increasing temperatures than the caterpillar. Increased heat can also suppress the virus. Malinski wants to better understand why this breakdown occurs. 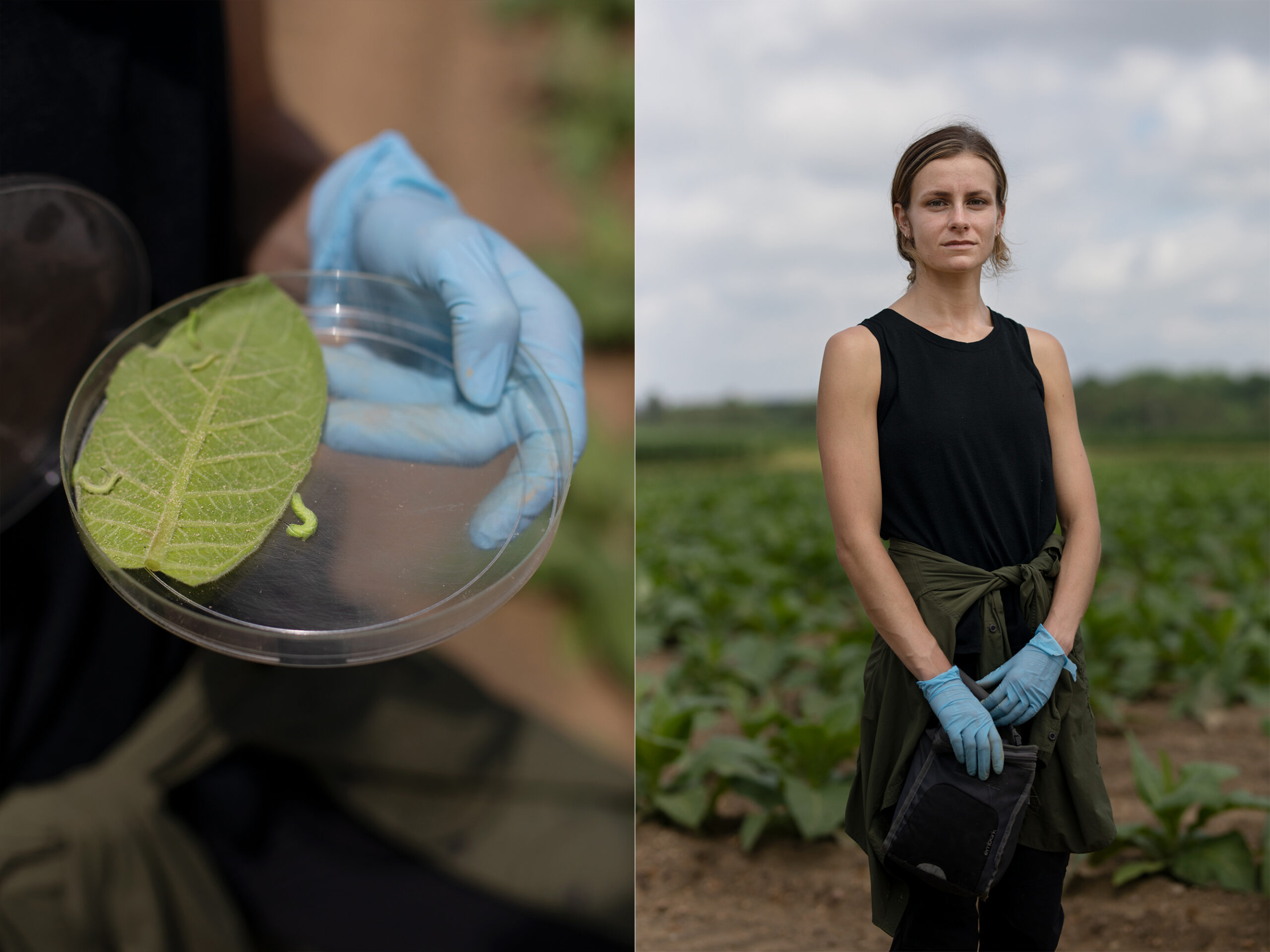 In a pilot study, Malinksi found that about 50 percent of parasitized quinqs that were heat shocked lived and completed development. In comparison, only about 5 to 10 percent of parasitized, heat shocked Manduca sexta survived. She is continuing that work to better understand why the outcome differs between species and what role the parasitoid wasp plays in that scenario. 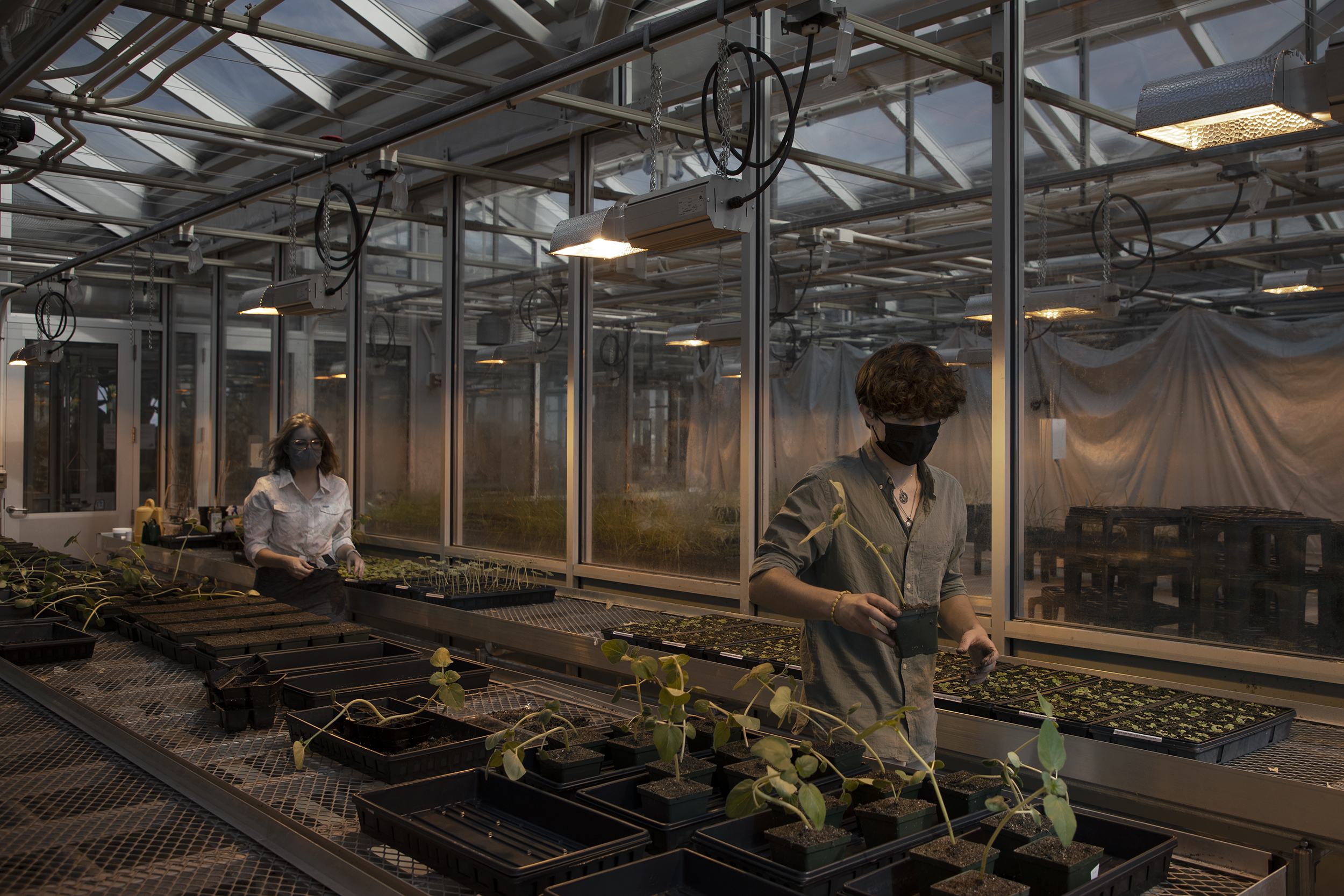 Anna Parker, a PhD student, and Pereira repot plants in the UNC Biology Greenhouse. Parker’s research is focused on the role devil’s claw and tobacco play in the relationship between the hornworms, parasitoid wasp, and climate change. 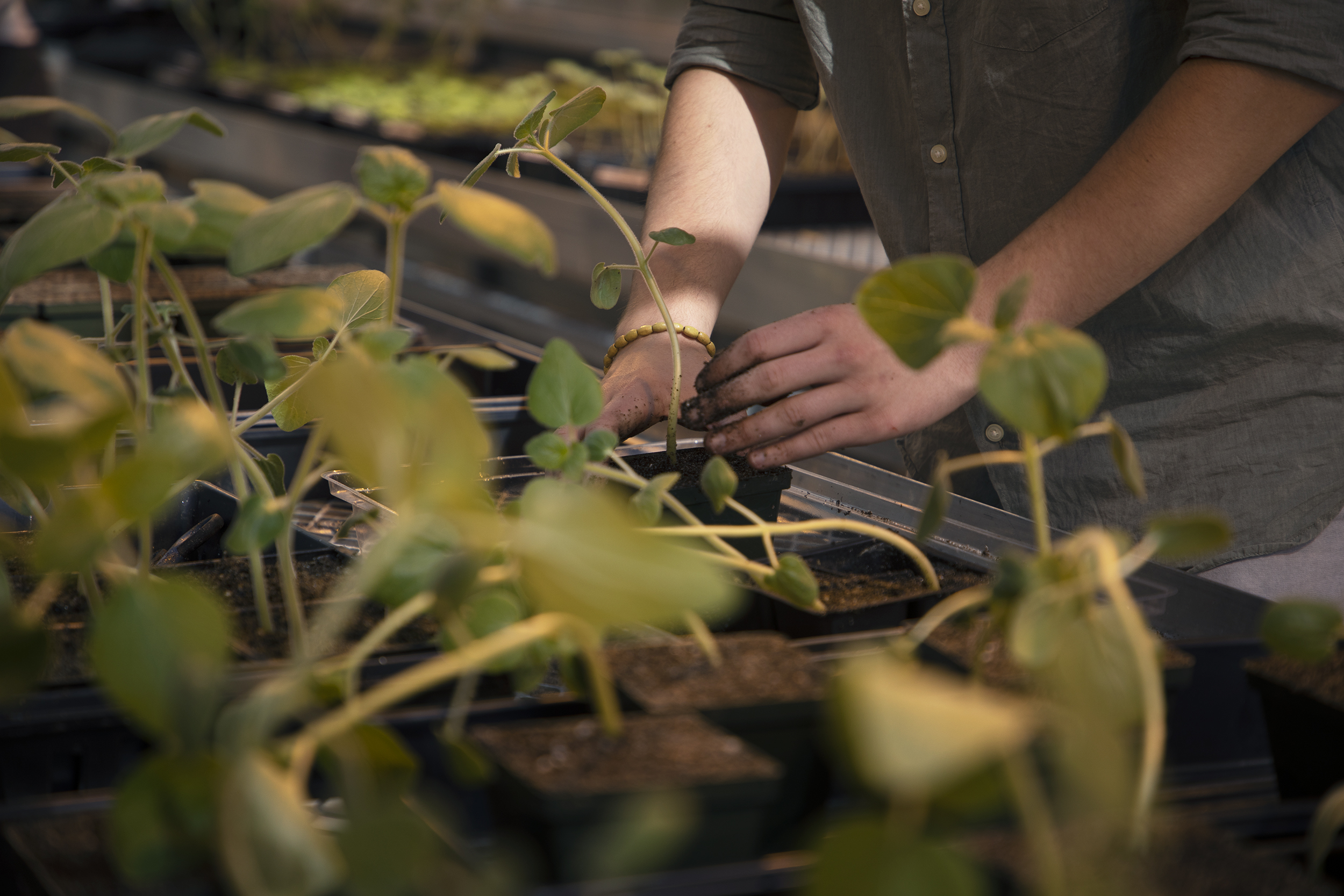 Pereira repots a devil’s claw plant in the greenhouse. As a host plant, devil’s claw is inferior to tobacco plants — the caterpillars have higher mortality, reduced immune function, and slower growth. But caterpillars are far less likely to be parasitized on devil’s claw. “There’s this tradeoff for an adult female moth laying her eggs,” Parker says. “Does she lay them on tobacco which is a better plant but they have a good chance of getting parasitized and die? Or does she lay them on devil’s claw, where they might die since it’s not a great host but they won’t get parasitized?” 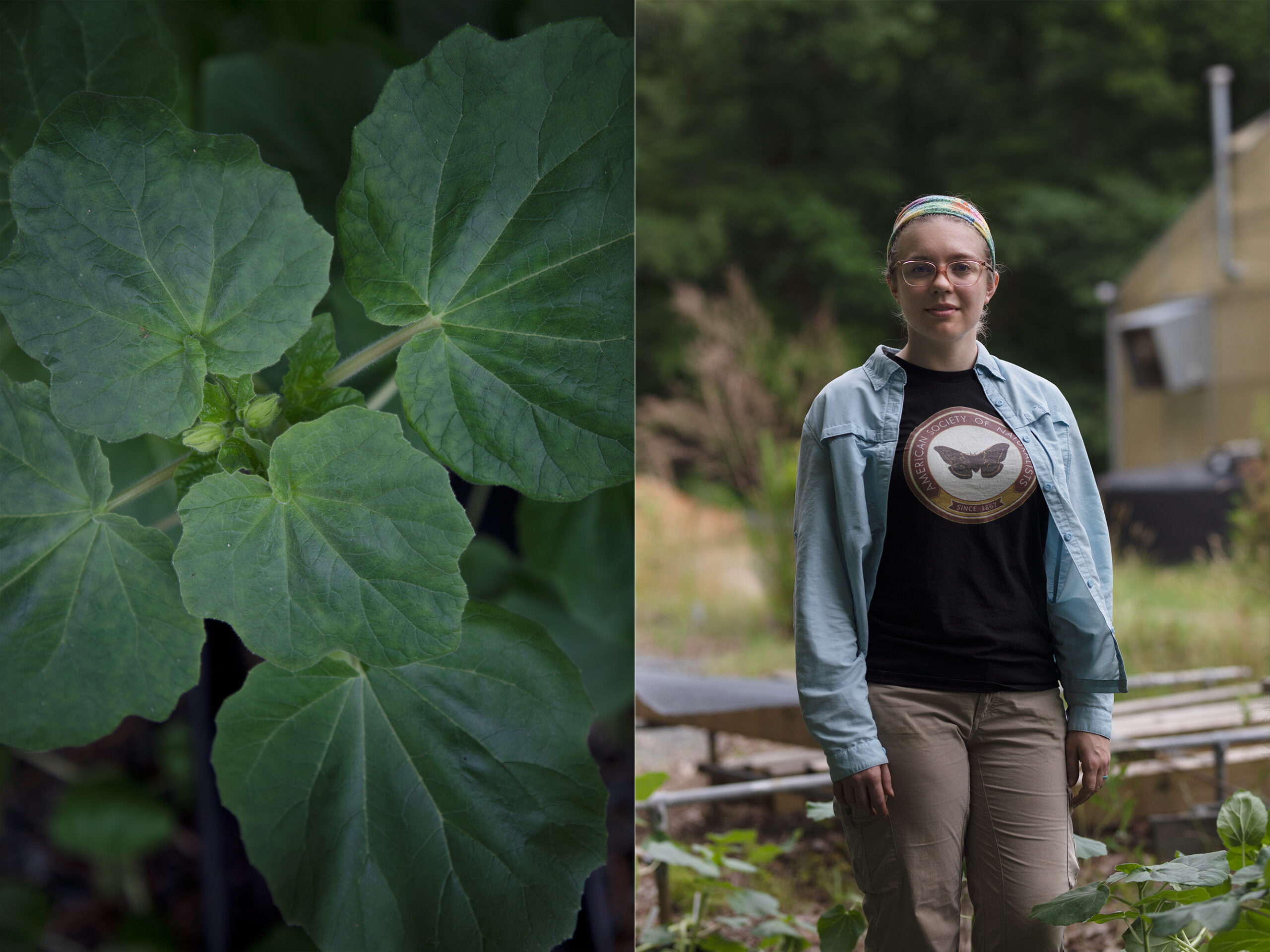 This summer, Parker’s field work involves putting parasitized hornworms on devil’s claw and tobacco plants in an experimental garden at Mason Farm Biological Reserve and observing how they affect the plants’ lifecycles. In high heat, the parasitoid wasp larvae are killed, but the virus persists. The result is called a WOWE (With Out Wasp Emergence) — a caterpillar that will continue to grow and eat, but will never molt and turn into a pupa. A healthy caterpillar is about 12 to 15 grams. A WOWE can be double that size. Parker is specifically using WOWEs in her experiment, seeing how they affect the development and reproductive success of the plants. 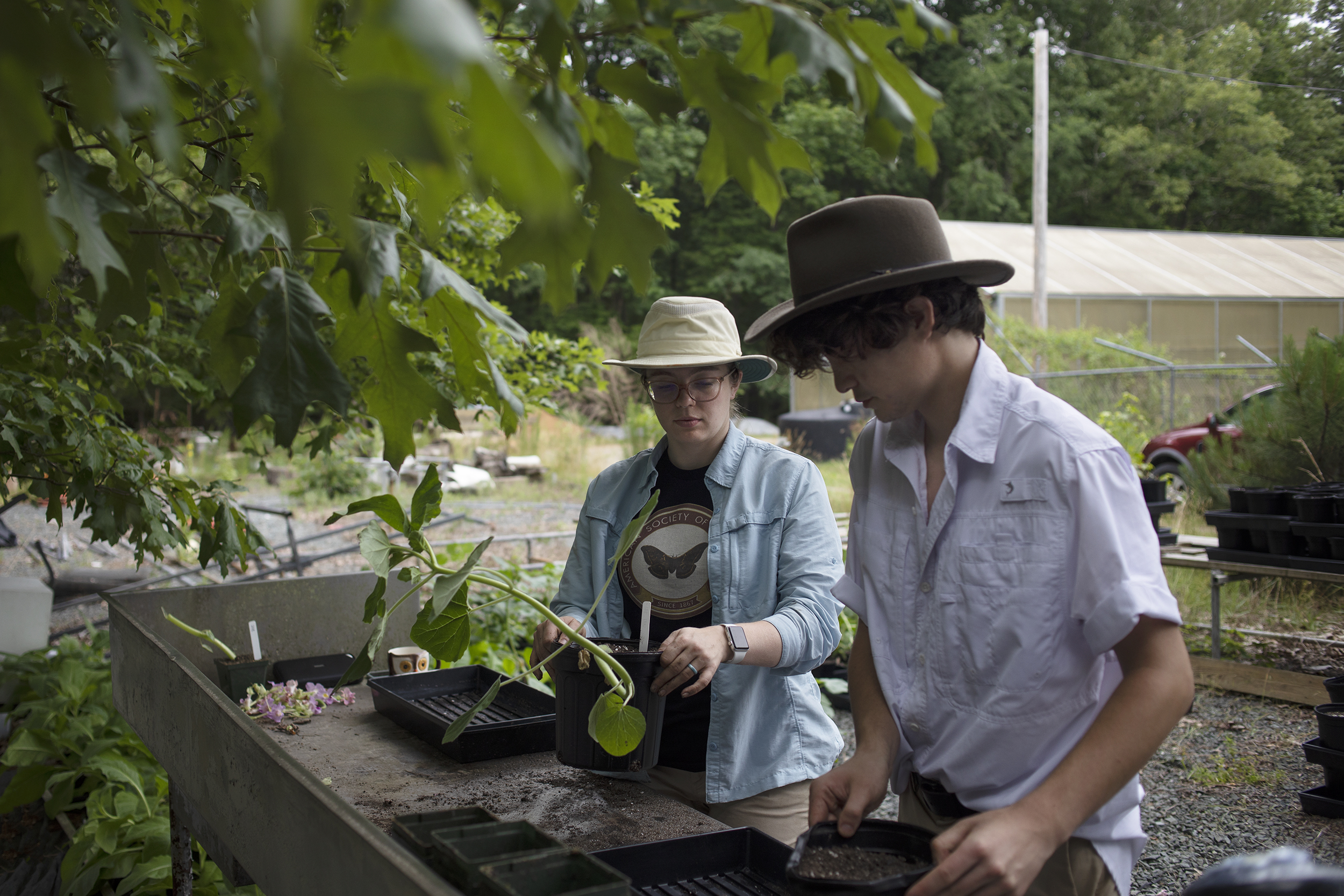 While the term “parasite” tends to have negative connotations, parasitoid wasps play an important biocontrol role in the hornworm population.  “As temperatures warm, we expect WOWEs might show up more in nature,” Parker says. “So this has important ecological implications because they’re going to be consuming a ton more leaf material.” 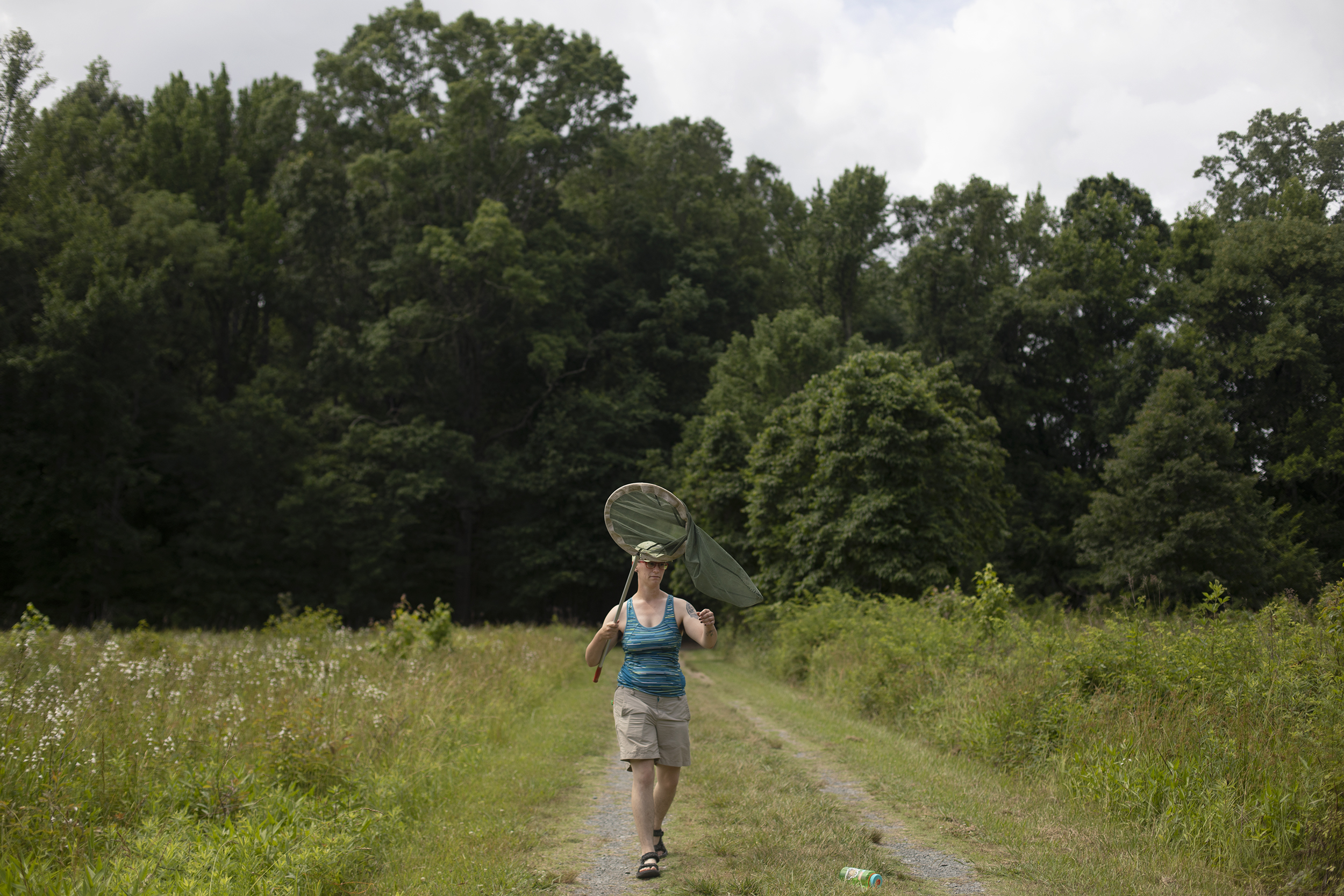 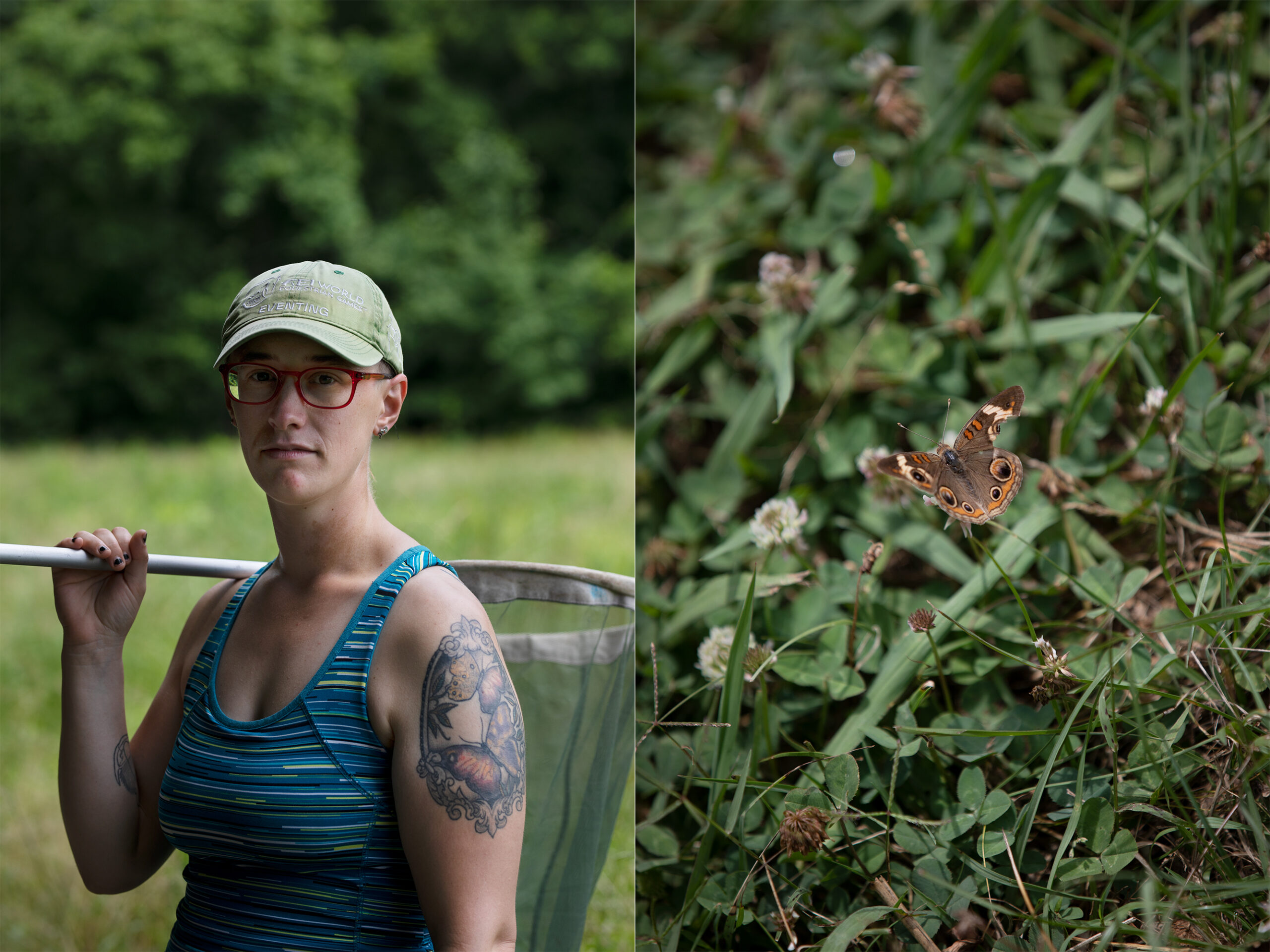 After six years in the Kingsolver Lab, Moore has received a postdoctoral fellowship at NC State University. While Moore’s place of work has changed, her infatuation with insects remains. “I just think they’re so fascinating,” she says. “They’re vital to basically every single ecosystem on the planet. So understanding how these ecological interactions will be affected by humans is important to be able to preserve and enrich our ecosystems.” 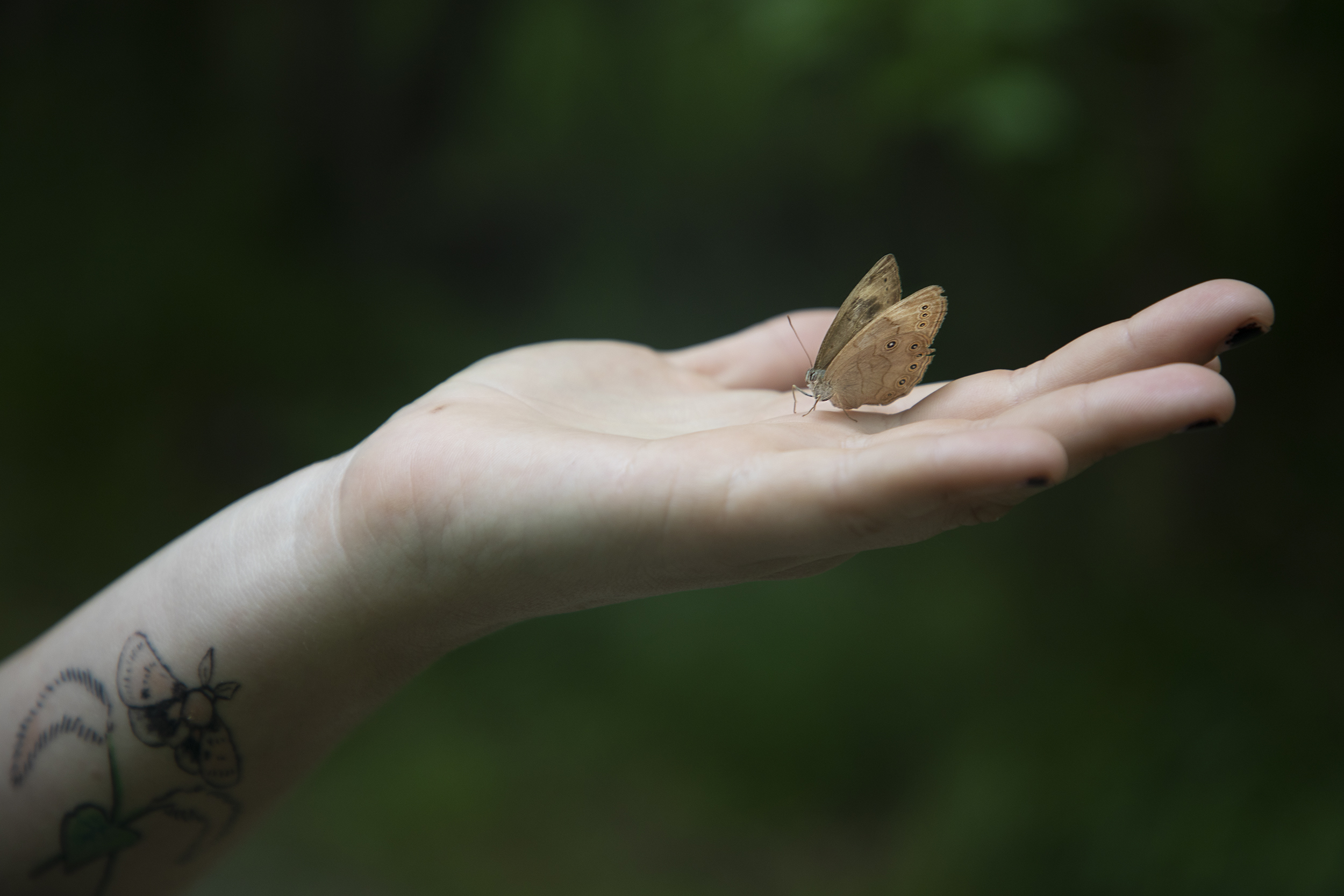 Moore holds an Appalachian brown butterfly, one of about 175 species of butterfly found in North Carolina and 75 found at Mason Farm. Butterflies and moths are indicator species — animals whose abundance and health provides information on the overall condition of their ecosystem. “Because they’re so tightly tied to their host plants and only occur in certain habitats, they’re wonderful canaries in the coal mine,” Kingsolver says. “They’re really useful study systems because we can detect ecological changes with butterflies and moths often before we can detect them through other beings.”

Joel Kingsolver is a Kenan Distinguished Professor in the Department of Biology within the UNC College of Arts & Sciences.

Katherine Malinski is a PhD student in the Department of Biology within the UNC College of Arts & Sciences.

Elizabeth Moore is a former PhD student in the Department of Biology within the UNC College of Arts & Sciences. She is now a postdoctoral fellow at NC State University.

Anna Parker is a PhD student in the Department of Biology within the UNC College of Arts & Sciences.