By Megan May
Earth | Video

Ask people about their favorite animal and most will probably say a dog or a cat, maybe even something more exotic like a dolphin. Ask Jared Richards and he will tell you he loves the cuttlefish — an animal related to the octopus, with eight arms and two tentacles lined with suckers. These relatively small and quick creatures can change their color and pattern in a fraction of a second and are thought to be among the most intelligent invertebrate species.

“Cephalopods have always been my favorite group of animals,” he says. “I remember when I first made the connection that they’re in the same phylum as the common garden snail. It’s kind of crazy.” 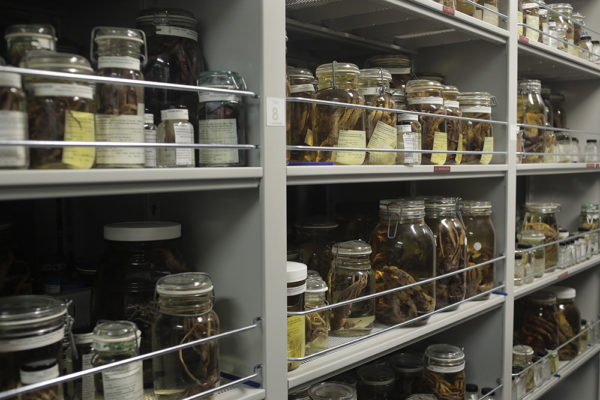 Richards, a UNC junior, spent the past summer working as a natural history research experiences intern with the Smithsonian Institution. His research involved cataloguing over 400 cephalopods — like cuttlefish, squid, and octopods — caught more than two miles below the sea surface during a 2009 research expedition at the Atlantic Ocean’s Charlie-Gibbs Fracture Zone. He also employed computer science techniques to calculate the abundance of species in the region based on what researchers brought back.

At the Smithsonian Institution Museum Support Center in Maryland, Richards pulls a cart through the mollusk room. The large storage area bursts with floor-to-ceiling shelves, lined with over 100,000 clear jars containing marine life. Richards loads up his cart with vessels of all sizes, from small bottles to five-gallon buckets.

Back in the lab, he carefully places the containers on a table and gets to work. With a textbook open beside him, he examines each specimen to confirm it is correctly identified. 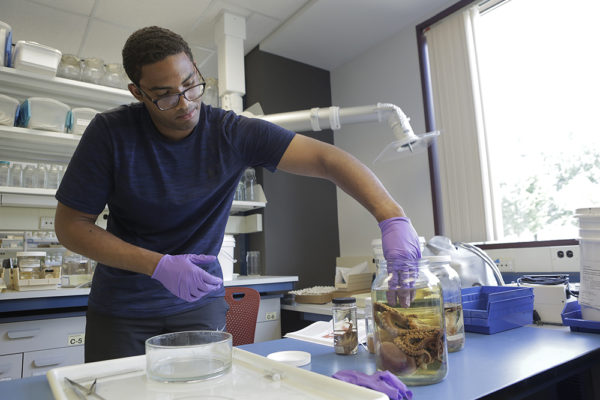 Jared Richards removes an octopus from a jar for examination.

Spending hours in a cloud of alcohol fumes, poking and prodding a squishy octopus may not be everyone’s idea of a great time, but Richards loves it. He even got the chance to inspect what his mentor believes may be an undiscovered species.

“It’s something that I never expected in my life — that I’d ever have the opportunity to see, besides in photos, what these deep-sea organisms look like,” he says. “It’s astounding.”

His biggest unexpected opportunity, though, was acceptance into the Smithsonian Institutions’ internship program. Growing up just an hour away, family trips to D.C. centered around visiting the museums, which helped cultivate his fascination with zoology.

As Richards walked through the ocean hall of the National Museum of Natural History as a child, he never imagined years later he would be making that same walk on his way to work.

“To grow up around the museum and to know that it’s the United States’ hub for zoology and natural history, and then have the ability to work there is just truly amazing,” he says.

Jared Richards is a UNC junior majoring in quantitative biology within the UNC College of Arts & Sciences.  The Natural History Research Experiences is a summer internship program with the Smithsonian Institution’s National Museum of Natural History. Students work with mentors during the 10-week program to complete independent research projects in earth science, biology, and anthropology.