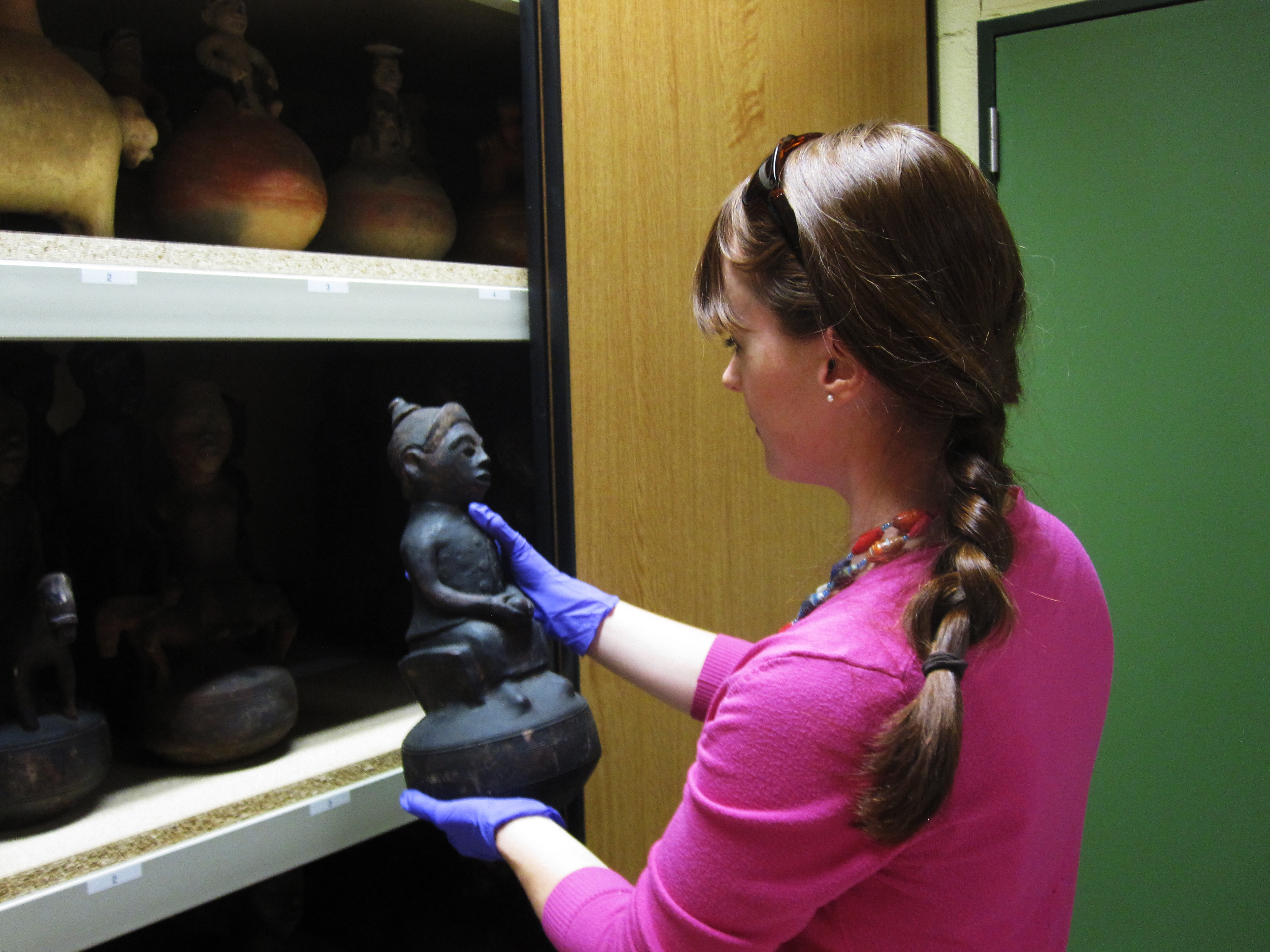 “They were conquerors, and for that you want only brute force — nothing to boast of, when you have it, since your strength is just an accident arising from the weakness of others.” – Joseph Conrad, “Heart of Darkness”

When he was granted the Congo Free State through the 1885 Berlin Conference, King Leopold II made history as the first individual to control a new colony. His reign resulted in two decades of bloody violence before public pressure forced Leopold to step aside, and the Congo was annexed as a colony of Belgium.

History books and popular literature often depict this era as one of the great travesties of humanity — yet another time when Europeans seized control of an indigenous population and seemingly destroyed their way of life. Books like “Heart of Darkness” by Joseph Conrad or “King Leopold’s Ghost: A Story of Greed, Terror and Heroism in Colonial Africa” by Adam Hochschild reflect the themes of abuse and hopelessness.

But Carlee Forbes, a PhD candidate in the Department of Art History, says this narrative is too simple. By examining art produced during this period, she argues the Congolese people weren’t as passive and weak as popular literature portrays — it was more complicated. “There were artists living at the time, taking commissions and making their art,” Forbes says. “Some of them resisted Colonial rule, others collaborated with it, and many were just trying to get by. But they were all there, and they were all experiencing it and reacting to it in some way.”

Through case studies of Congolese art in various mediums, she hopes to add more complete information to the narrative of this turbulent time in the Congo’s history.

As Belgium sought to assert its control, it was not unheard of for government officials to appoint new chiefs in Congolese villages. This new chief was typically someone who became familiar to the Belgians either through trade or as a guide and offered a convenient way for them to have control, according to Forbes.

“Someone who was once a nobody, like a trader, just happens to rise to power because he has a connection to the Belgian imperialists … how do you demonstrate that?” Forbes asks. She points to images on a raffia mat. “Something like this comes out of that interaction.”

“There’s a long history, going back to at least the 15th century, of using raffia mats as a status marker,” Forbes says. “When a new leader came to power, one thing that he could do to try to legitimize his authority was to draw upon this long-standing practice of displaying raffia. Because the Belgians were appointing people who may not have come from a long lineage of chiefs, these individuals had to do things to assert their authority. Raffia was one way of doing this. 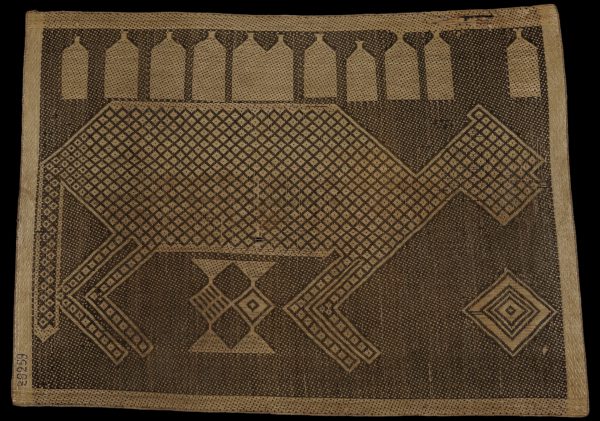 Photo courtesy of RMCA, Tervuren
Since the 15th Century, the Congolese have created and displayed raffia mats as symbols of status. The leopard on this mat represents the ability to move between both the human and spiritual realms — a sign of power, according to the people of the Congo.
Photo by J.-M. Vandyck. Raffia Mat. Kongo artist. Early 20th century. Collection RMCA Tervuren, EO.0.0.29259.

Whereas the display of raffia has a long history, the use of figurative motifs (rather than geometric abstract patterns) on the mats is an innovation of from the late 19th and early 20th century. This mat shows a leopard and some bottles.

Regalia with leopard claws or skin represented status. “There was a long-standing believe that the leopard could move between spiritual realms and realms of the living,” Forbes says. Adorning himself in leopard regalia allowed the chief to show he had the affirmations of the spirits. “Having an animal that encompasses all of that on a raffia mat was just another way to show status, and show that this leader knows how to connect to this culture.” Images of bottles are prevalent from this time period as well. Forbes talks about “wonderful” photographs of chiefs surrounded by trade bottles, like gin, which was a sign of contact with Europeans. It was their way of saying I am wealthy, I am powerful, and I’m a leader, according to Forbes.

Summer at the museum

The Royal Museum for Central Africa in Tervuren, Belgium, has the largest collection of Congolese art in the world. Forbes spent six weeks this past summer working and conducting research there. Since the museum is undergoing a major renovation, Forbes assisted with the redesign of exhibits, which included editing text and citations.

The museum focuses on aspects of historical Congo, including many examples of classical art forms, but it also shows connections and similarities that Congo has with the rest of the world. For example, there are state schools in the Congo that are similar to European state schools. “They have uniforms and books, but there are problems, too,” Forbes says. “I think they show that dichotomy quite nicely.”

Direct access to one of the best museums in the world certainly has its perks. “There were a few days I was able to go into cabinets and look at objects for my dissertation,” Forbes says. “One cabinet of artifacts was directly related to my dissertation so I just spent all day taking them out, examining them, and photographing them.”

The extent of European influence

“You thought yourself bewitched and cut off forever from everything you had known once — somewhere — far away in another existence perhaps.”

Despite being roughly 4,000 miles from Europe, to say that colonial Congo was completely cut off from the rest of the world is not accurate. In contrast to the imagery presented by Joseph Conrad, a Congolese artist by the name of Paul Mapinda produced watercolor paintings that replicate images from European fashion magazines.

“From the hats down to the shoes, he clearly knows the style of the day,” Forbes says. “What does it mean that he’s living in the Congo but fully informed about European culture?  What was he doing? I want to figure that out.” 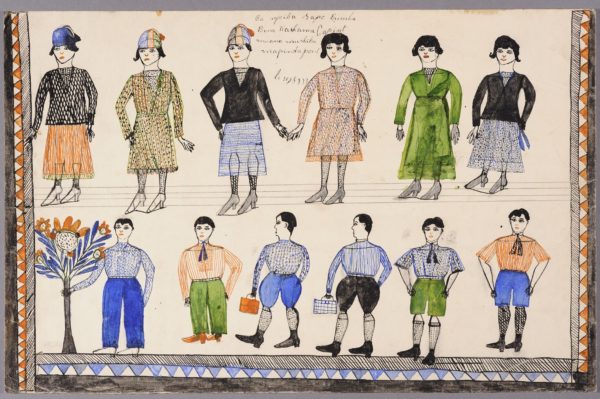 Photo courtesy of RMCA, Tervuren
The influence of European culture is evident in some of the artwork from the Congo. This watercolor painting produced by Paul Mapinda replicates images from European fashion magazines.
Mapinda, Paul (Congolese). Untitled watercolor. 1931. Collection RMCA Tervuren, HO.0.1.3418.

For another set of watercolors, Forbes tells the story of a Belgium administrator who discovered two artists in the Congo — one was an ivory carver and the other a muralist. But the administrator was not interested in ivory pieces or a mural — he wanted watercolor paintings to send back to Belgium. The artists accepted his commission, willing to adapt what they already knew to fit a new medium. “It’s an interesting morphing of mediums and technique,” Forbes says. “But I think that it’s also an interesting expression of them creating things they thought he would want to see.”

There is still a lot of work to be done to confirm who these artists were, who commissioned these pieces, and how these objects might have come into museum collections, but they offer valuable insight into the lives of these artists, according to Forbes.

In the case of Mapinda illustrating the European fashions of the day, Forbes asks: “How was he interacting with these Belgians who were coming in and prescribing a new style for him? This is such a poignant example of showing he was aware of what was happening around him.”

Forbes is applying for research grants to go to Congo for an extended period of time — nine months to a year. While much of colonial Congolese art resides in museum collections in Belgium, Forbes says there may still be pieces to explore in Africa. “It’s rather disorganized in terms of where things are and how well they’re preserved and whether or not there is anything left there.” But, she knows of several collections that have some colonial-era objects, and she wants to go there, examine these examples, and try to find artifacts that haven’t been discussed in past scholarship.

One large part of the narrative that Forbes has not yet explored in her research is art from several Catholic and Protestant missions that hosted initiatives to interact with local people through creative projects. “They would weave textiles, or stitch embroidery, or make ceramic pots to be sold,” Forbes says. Were these art projects designed to economically support the mission?  Or were they an easy way to connect and provide useful work for the people who were being evangelized? Forbes doesn’t have answers to those questions yet, but she says many old mission stations still have small collections of pieces that were made there. “I think that’s a really rich story that has very little scholarship,” she says. “How were the missions involved in the arts?”

Forbes has been in contact with several former missionaries who worked in Congo during the 1960s. Some of these missions have archives, and one in particular has a very well preserved archive that the local community is determined to keep in Africa — not send to Belgium, according to Forbes.

Collective memory and a new narrative

When Forbes discusses her research, she talks a lot about collective memory. In the 1980s, some art history scholars argued that because these pieces of Congolese artwork were sent directly to Belgium, the Congolese forgot about them. “After decades in storage, these works were ‘rediscovered’ in the 1980s,” Forbes says. “So there’s an argument that they don’t have a legacy in Congo because no one remembers them.” But some contemporary Congolese artists look back at these pieces and consider them part of their heritage, according to Forbes.

“A big question that the Congo — and Belgium, too — is trying to work through is how does colonial memory persist today?” Forbes says. “What are its effects? How do we work with that memory?

“What does it mean to put these objects on display in a museum? What story is displayed with them? What context is given?” Forbes asks. “How does the general public react to them?”

“I’m not saying that colonialism in the Congo wasn’t as bad as everyone says it was,” she says. “But Congolese people weren’t just passive sufferers. I’m trying to show that it wasn’t that simple.”

Carlee Forbes is a PhD candidate in the Art History Program in the Department of Art in the UNC College of Arts & Sciences.