About an hour after the sun sets over the ridgeline of the Blue Ridge Mountains, Kristina Hefferle and Leah Morrissey hike to a nearby creek in total darkness under a tangle of rhododendron, dog hobble, and towering pine trees. The elusive needle they’re seeking in this botanical haystack is the male Blue Ridge two-lined salamander — a bright orange 6- to 10-centimeter-long amphibian about the thickness of a pencil, known to hang out around the streams and lakes of the southern Appalachian Mountains.

Stumbling through mountainous terrain in the dark for hours on end, turning over rocks and leaves in muddy creek beds, and looking for an animal the size and color of a baby carrot makes having a reliable research partner crucial.

“There’s honestly nothing better than having a partner that can do everything that you can’t, and vice versa, especially if you have to go out in the middle of the woods in the dark,” Hefferle, a UNC-Chapel Hill junior, says. “I cannot, for the life of me, spot a salamander — but Leah can. And she might miss it when she tries to catch it, but I’m there to back her up if she needs it.”

UNC Institute for the Environment offers a program for undergraduates at the Highlands Biological Station that allows them to live and work on projects centered around the diverse wildlife of the Appalachian Mountains.

It’s the kind of teamwork that develops after a semester of close collaboration at the UNC Institute for the Environment’s Highlands Field Site — a program for a small cohort of UNC-Chapel Hill undergraduates to live and conduct research at the Highlands Biological Station in western North Carolina. Each student takes on a research project and learns to tackle field and lab work, analyze data, use statistical research software, conduct a literature search, and create a research report. 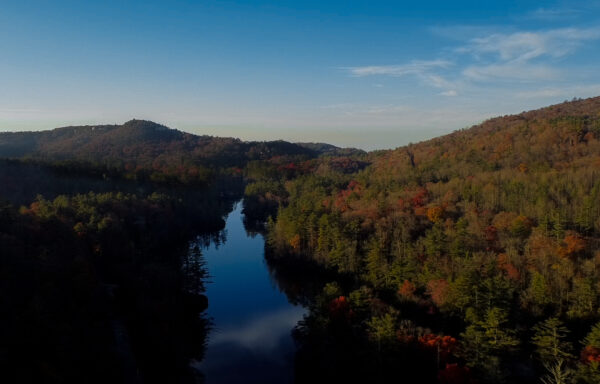 UNC Institute for the Environment offers a program for undergraduates at the Highlands Biological Station that allows them to live and work on projects centered around the diverse wildlife of the Appalachian Mountains.

At first, Hefferle felt anxious about the program’s semester-long commitment.

“I think when I first signed up for this program, I was really nervous about leaving Chapel Hill,” she says. “I was afraid that all my friends would be there, and I would just be out here in the wilderness. But it was effortless to adjust. We have a lot of fun here outside of our classwork, but even in class, it’s tough not to become friends with the 15 people you live, work, and eat with.” 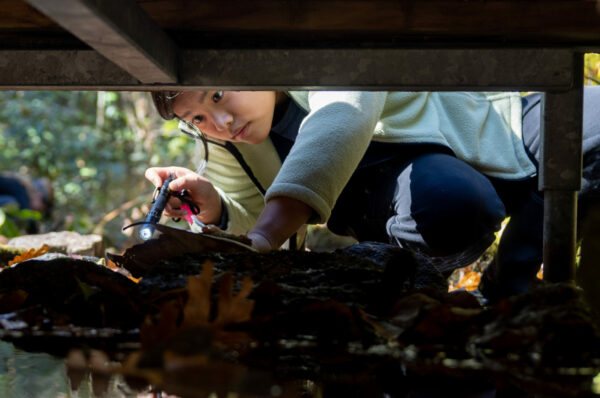 Leah Morrissey looks for the elusive male Blue Ridge two-lined salamander under a footbridge in the botanical garden of the Highlands Biological Station.

“I barely had any college experience, let alone fieldwork experience,” she admits. “I did a creek week in eighth grade. We splashed around in the creek, not like anything really scientific.”

During the application process, Morrissey voiced her misgivings to Rada Petric, director of the Highlands Field Site.

“She said, ‘It’s okay, we’ll meet you where you are.’ And I think it’s definitely lived up to that,” Morrissey says.

On Morrissey and Hefferle’s first night in the field, they got lost in the botanical garden, emerging from the forest at a neighboring nature center. They were joined by Yatin Kalki, a master’s student also working on the project. He pointed out salamanders, helping the two undergrads get accustomed to looking for them.

“At some point, he just said, ‘Okay, now you guys point them out,'” Morrissey recounts. “And it was a good several minutes of us just walking in silence because we couldn’t find any. So that first night was stressful, but we eventually got a lot better.”

Aside from the initial steep learning curve of the first night, both have grown to love fieldwork — and they’ve gotten good at it. This semester, they gathered data on 105 salamanders, three times the number of last year’s survey. Both credit their success to their partnership.

“I don’t know if it was just pure luck or because we have similar interests, but I think it really came together well,” Hefferle acknowledges. “Having someone who could really fulfill all the skills that you need, and you fulfill theirs, it’s really just so harmonious. I’m surprised that it worked out so well.” 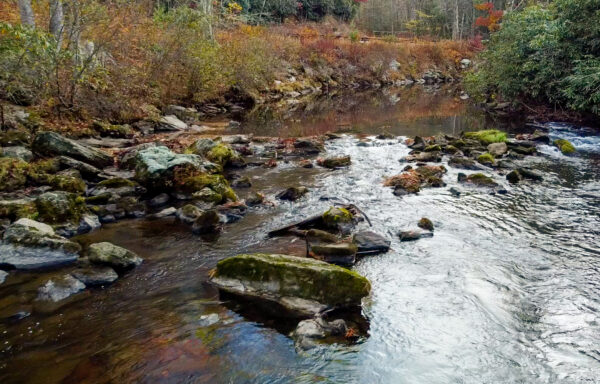 The male Blue Ridge two-lined salamander makes its home in and around the streams and lakes of the southern Appalachian Mountains.

Three days a week, Morrissey and Hefferle would head into the botanical gardens, focusing their search on the undergrowth near creek beds. When they’d eventually spot a male two-lined salamander, they’d guide it into a wet plastic bag. Salamanders breathe through their skin, and the moisture in a bag ensures their safety, as Morrissey and Hefferle gathered data.

“It’s been really cool seeing our progress from not even being able to see a single salamander to going into the creek and finding them in challenging places — and wrangling them and wrestling around in the water but still getting them,” Morrissey says.

First, they’d measure the length and photograph the spots on their backs. Later, they’d upload these into a database that uses AI to compare photos of the spots, allowing other researchers to identify and track individuals over time. They’d also take a small sample of the specimen’s tail for a polymerase chain reaction (PCR) test to establish a genetic snapshot of the animal. Finally, they’d determine the reproductive tactic used.

Male Blue Ridge two-lined salamanders pursue reproduction in two ways: Searching males are more terrestrial and spend rainy nights on the forest floor among vegetation while guarding males are more physically dominant and mainly found in the streams. Searching males are typically leaner. They have fleshy protrusions from their nostrils called cirri and maxillary teeth and glands that aid in the release of pheromones. Guarding males don’t have any of that, but they do have a prominent jaw they use to fight off other salamanders when searching for a nesting spot.

The project compares the genetic makeup of males, their reproductive behavior, and how they may change over a lifetime. 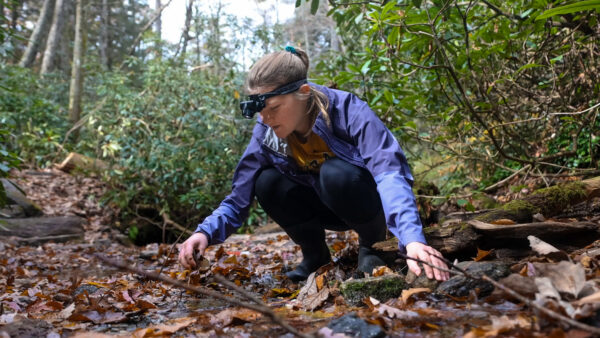 Kristina Hefferle looks for the male Blue Ridge two-lined salamander under a footbridge in the botanical garden of the Highlands Biological Station.

“The genetic component of this project and getting an opportunity to do PCR has been so alluring to me. It’s been so exciting to do,” Hefferle says. “When I first started taking biology in middle school, that thing that really drew me in was the genetic component.”

Morrissey, on the other hand, responded to the fieldwork. Growing up in Asheville, she would play outdoors in the forest near her house as a child, even spotting salamanders regularly in a nearby creek. But over the years, she spent less and less time in nature. Then, during the first week at the Highlands Field Site, her cohort took a hiking trip to the Great Smoky Mountains — and she realized what she’d been missing.

“And then later, getting out on the trail, looking for salamanders, just really sparked that childlike curiosity about nature,” Morrissey says. “This program has convinced me to switch my major to science in the hopes of more fieldwork either during school or in a future career.”

Kristina Hefferle is a junior majoring in biology and anthropology within the UNC College of Arts and Sciences.

Leah Morrissey is a sophomore majoring in environmental science within the UNC College of Arts and Sciences.