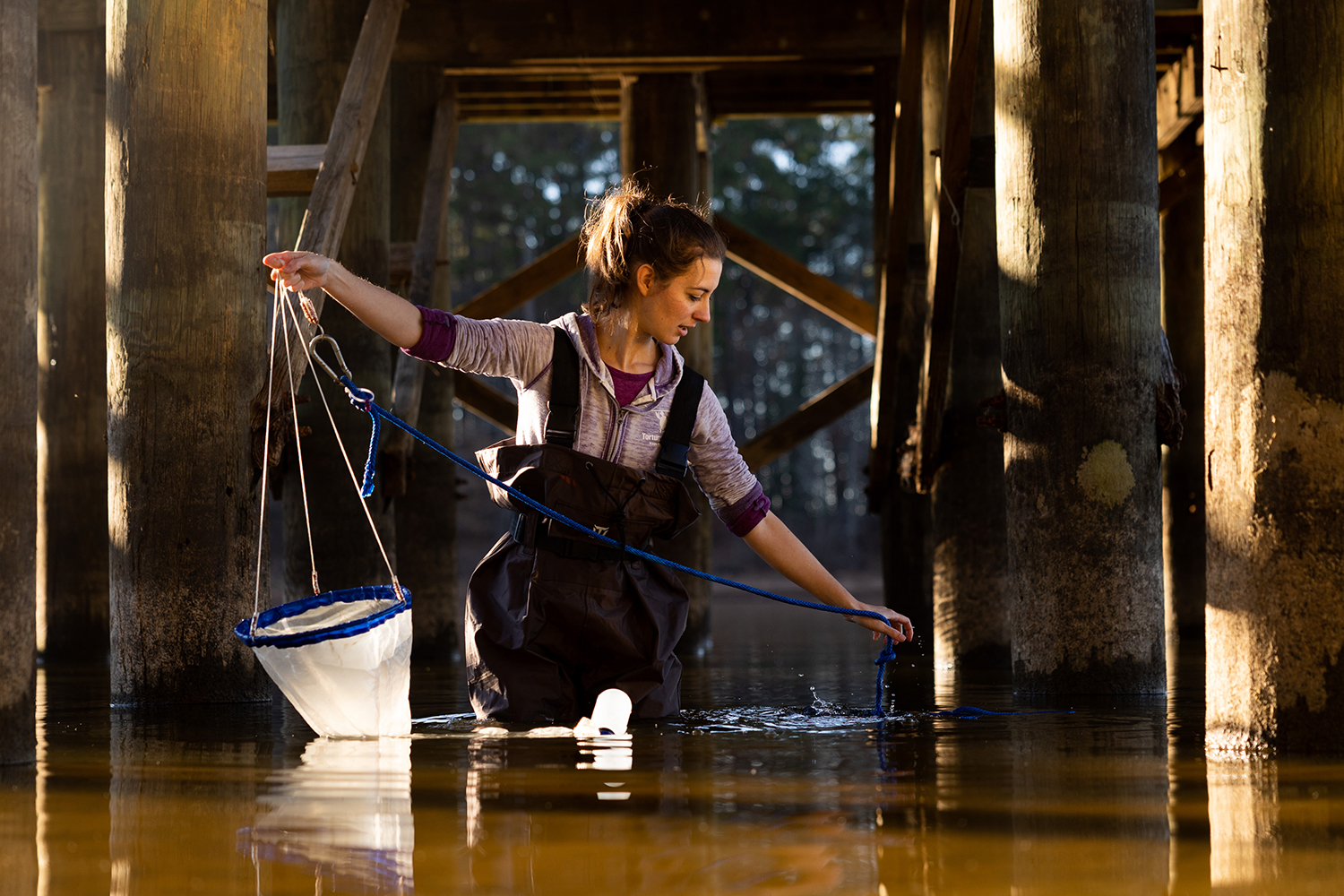 Emily Harmon, a PhD student in the Department of Biology, draws a plankton net from the water while collecting microscopic organisms called rotifers under the fishing dock at Jordan Lake in Chapel Hill. (photo by Andrew Russell)
By Megan Suggs
Earth | Foundations

When we think of evolution, we imagine Charles Darwin’s Galápagos finches, their beaks lengthening or becoming more powerful over thousands of generations to decrease competition by specializing in one food source. Variation, improved survival, and heredity drive the slow process.

Today, animals from corals to birds don’t have centuries to adapt to quickly shifting environments. One of the keys to surviving climate change may be an influence most evolutionary biologists have written off until recently.

Animals changing form or behavior in response to environmental changes within their lifetime is called plasticity — a process Emily Harmon personally experienced while conducting research during the COVID-19 pandemic.

As a UNC-Chapel Hill biology PhD student, Harmon studies how the environment and form of a parent impacts the behavior and appearance of its offspring. For example, an aphid on a crowded plant has offspring with wings so they can fly to a new plant.

“These parental effects were once treated as a nuisance or something you needed to control in your experiment,” Harmon says. “In the 1990s, we realized this also plays a role in important things in biology, like how novel traits are formed, how phenotypes come to be, and what that means for evolution.”

In 2019, Harmon began her research at the American Museum of Natural History’s Southwestern Research Station in the Chiricahua Mountains near the Mexican border. She collected spadefoot toads, which live where desert and mountains meet in southwestern United States. The landscape is a mix of orange, arid rocks and green oak, juniper, and pine forests.

About 40 years ago, biologists discovered as spadefoot tadpoles grow, their diet determines their appearance. Those that eat detritus and plants grow into what are considered average omnivorous tadpoles. Those that eat small aquatic creatures, like shrimp, look different.

“They become these big beefy carnivores,” Harmon says. “They have big jaw muscles. They have pointy mouth parts, and they’re much more likely to eat each other.” 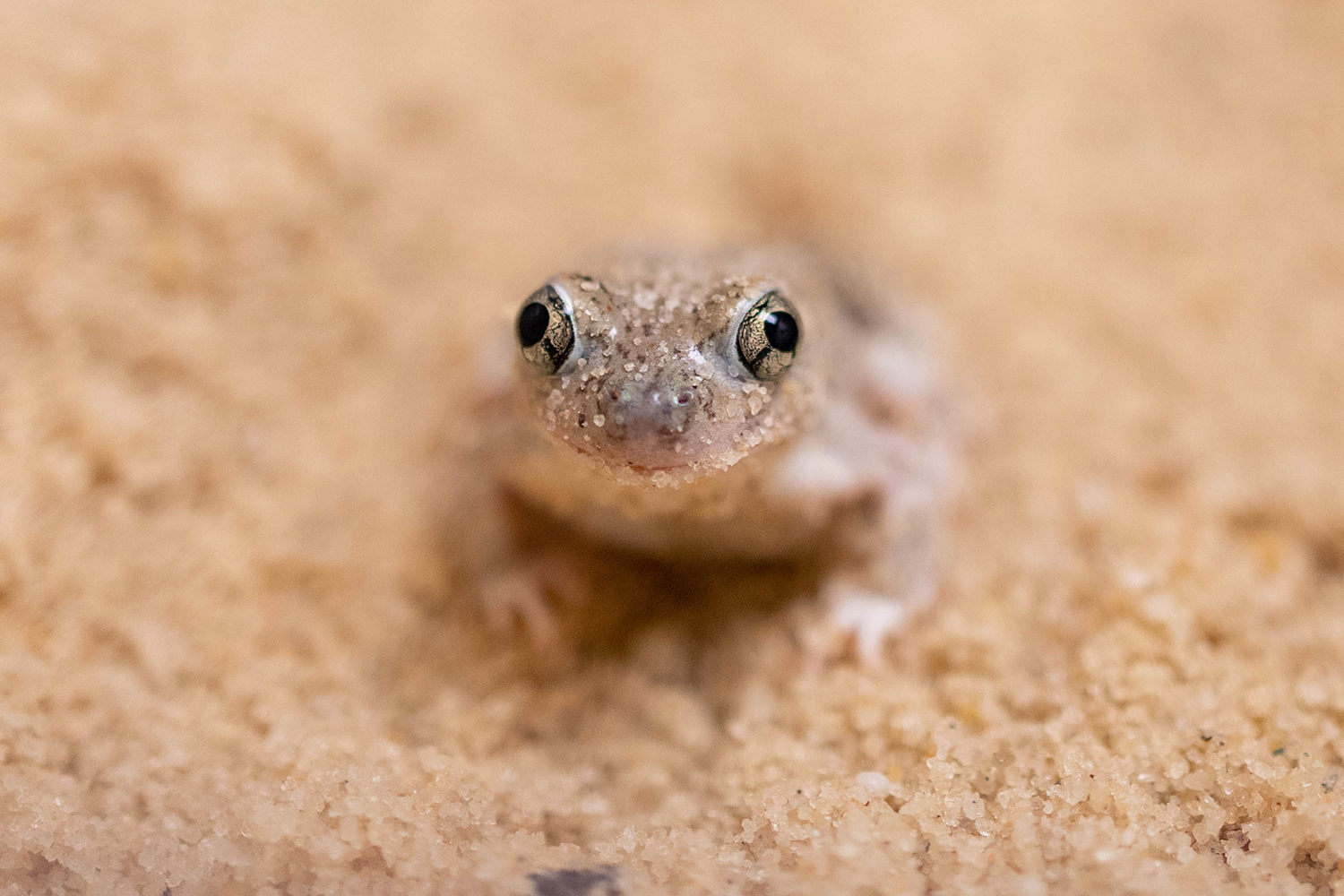 North American spadefoot toads occur from southern Mexico to Canada. Most live in arid and semi-arid habitats, such as deserts, grasslands, and deciduous woodlands. (photo by Andrew Russell)

Ten years ago, biologists observed the mother’s traits also impacted whether tadpoles were destined for the large mouths, often used to eat its siblings. The bigger the mother, the more likely she was to have cannibalistic offspring. When Harmon started her PhD, she wanted to learn where the environment’s influence stopped and where the parent’s influence began. She also wanted to find out how a tadpole became “beefy” if it wasn’t determined by its genes and diet alone.

“We were essentially focusing in on the egg as the factor through which some sort of information other than just genetic information was being passed down to the offspring,” Harmon says.

Hypotheses ranged from protein variation to symbiotic bacteria entering the egg and shaping the offspring.

Spadefoot toads are an ideal organism for studying parental effects because they do not raise their young. Otherwise, quality parenting would be one more variable to consider during the experiment. Harmon planned to travel to spadefoot toad populations in Arizona and New Mexico in 2020 to see what the mothers, eggs, and tadpoles looked like in nature.

Then COVID-19 hit, and the research station closed. While Harmon could have collected toads, she couldn’t have conducted any experiments, so she turned her eye to a different species.

Harmon has since travelled to several lakes and ponds near Chapel Hill to collect microscopic creatures called rotifers. Like tadpoles, they’re omnivores — eating detritus, algae, and smaller aquatic animals. A certain type of rotifer called the Asplanchna, though, generationally changes form depending on what the parent eats. 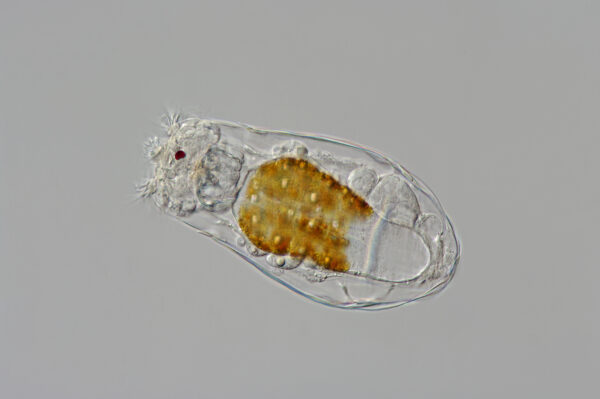 Considered one of the smallest organisms on Earth, rotifers can only be seen with a microscope. (photo courtesy of Wikimedia Commons)

In the world of microscopic aquatic creatures, the key to survival is being too big to fit in the mouth of the next largest animal. If a rotifer consumes a lot of vitamin E from green algae, its offspring will be bigger, and appendages grow from their body, making them wider. If this second generation consumes enough vitamin E, its offspring will be five to 10 times the size of the original female. Like the spadefoot toad tadpoles, the third generation is carnivorous and often cannibalistic.

Harmon is collecting Asplanchna from various sites to compare how responsive different lineages are to vitamin E. With this comparison, she hopes to demonstrate how transgenerational plasticity impacts species’ survival in the face of environmental change. This concept is the buying time hypothesis. If animals in a population can quickly adjust to an environmental shift to survive for more generations, it buys the species time to adapt and evolve into a form that better suits its new environment.

Researchers have observed this in birds. Species that have more plasticity have persisted despite stressful conditions.

Harmon is creating the first empirical test for the buying time hypothesis. Rotifers are a great subject because they have a fast generation time, it’s easy to maintain multiple lineages, and researchers can create the new environment for them to react to in a small jar.

Right now, in collaboration with a rotifer researcher in Texas, Harmon is working to create Asplanchna colonies with ancestors from different ponds. Each colony will have plenty of vitamin E. She will document how much carnivorous offspring each colony produces to determine its plasticity. She’ll then introduce the colonies to an environmental change to see if those with more plasticity are better at survival. 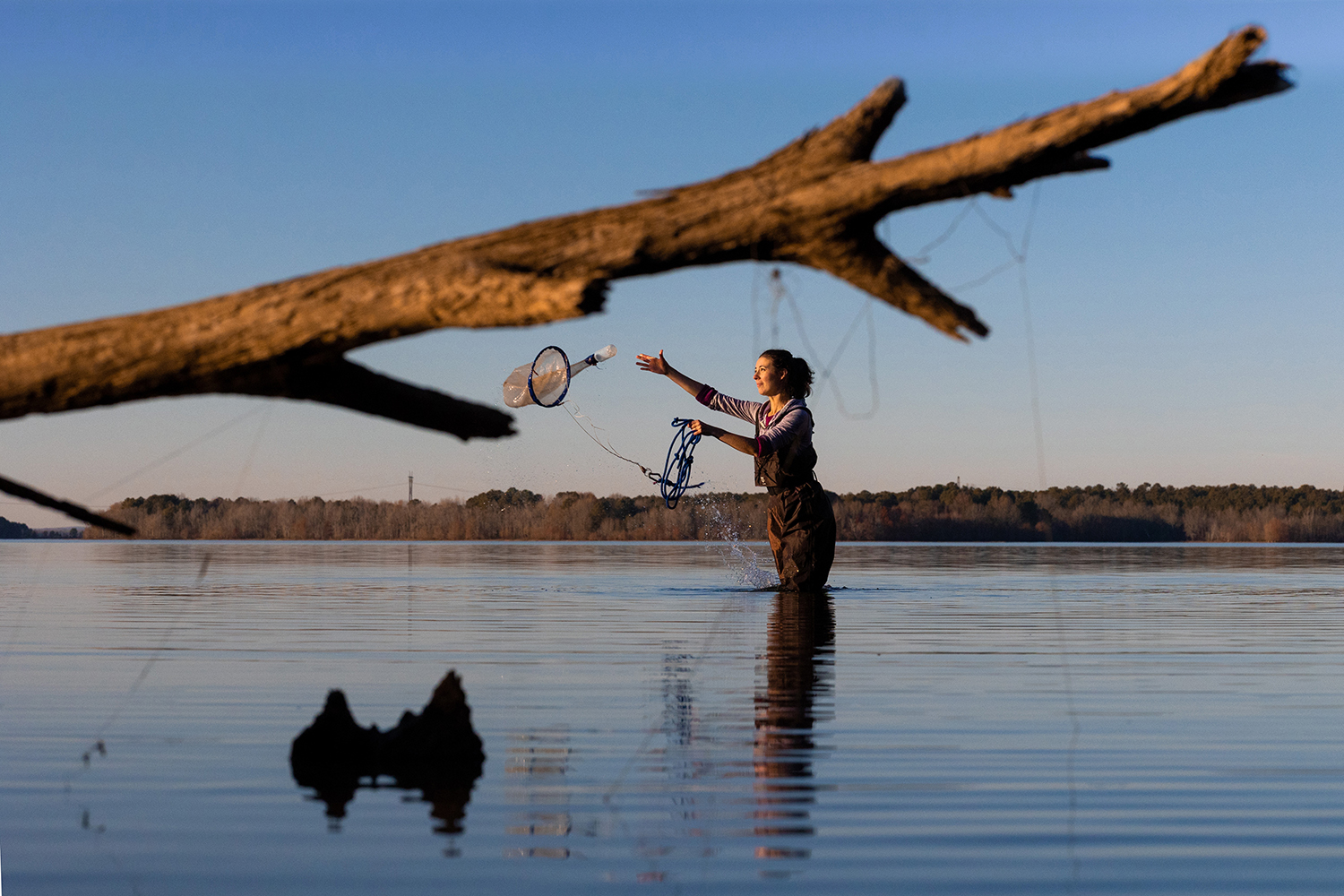 Rotifers can be found all over the world, which makes them easy for Harmon to find and collect across Chapel Hill’s numerous lakes and ponds. (photo by Andrew Russell)

Harmon’s research could help determine if transgenerational plasticity can help a species persist for multiple generations and eventually evolve. If that’s the case, conservation strategies could shift. Often, conservationists try to introduce new genetic material to a species to increase variation to drive adaptation. For some species, it might be in their best interest to try to trigger plasticity instead.

“It might even be possible to pre-expose species to stressful environments so that they can develop a plastic response that could be passed down across generations,” Harmon says.

So far, that’s worked for Harmon, who – like most of us – has found the pandemic frustrating but good for adaptation. She enjoys her new project on rotifers and sees a lot of potential.

“When it was clear the work with spadefoot toads would be infeasible, I was able to step back, figure out what questions I was really interested in, and pick a study system best suited for that work,” she says. “If this works out, I’ll have not just contributed to the spadefoot system, but started to carve out my own area in the field.”

Emily Harmon is a PhD student in the Department of Biology within the UNC College of Arts & Sciences and fellow in the Royster Society of Fellows.