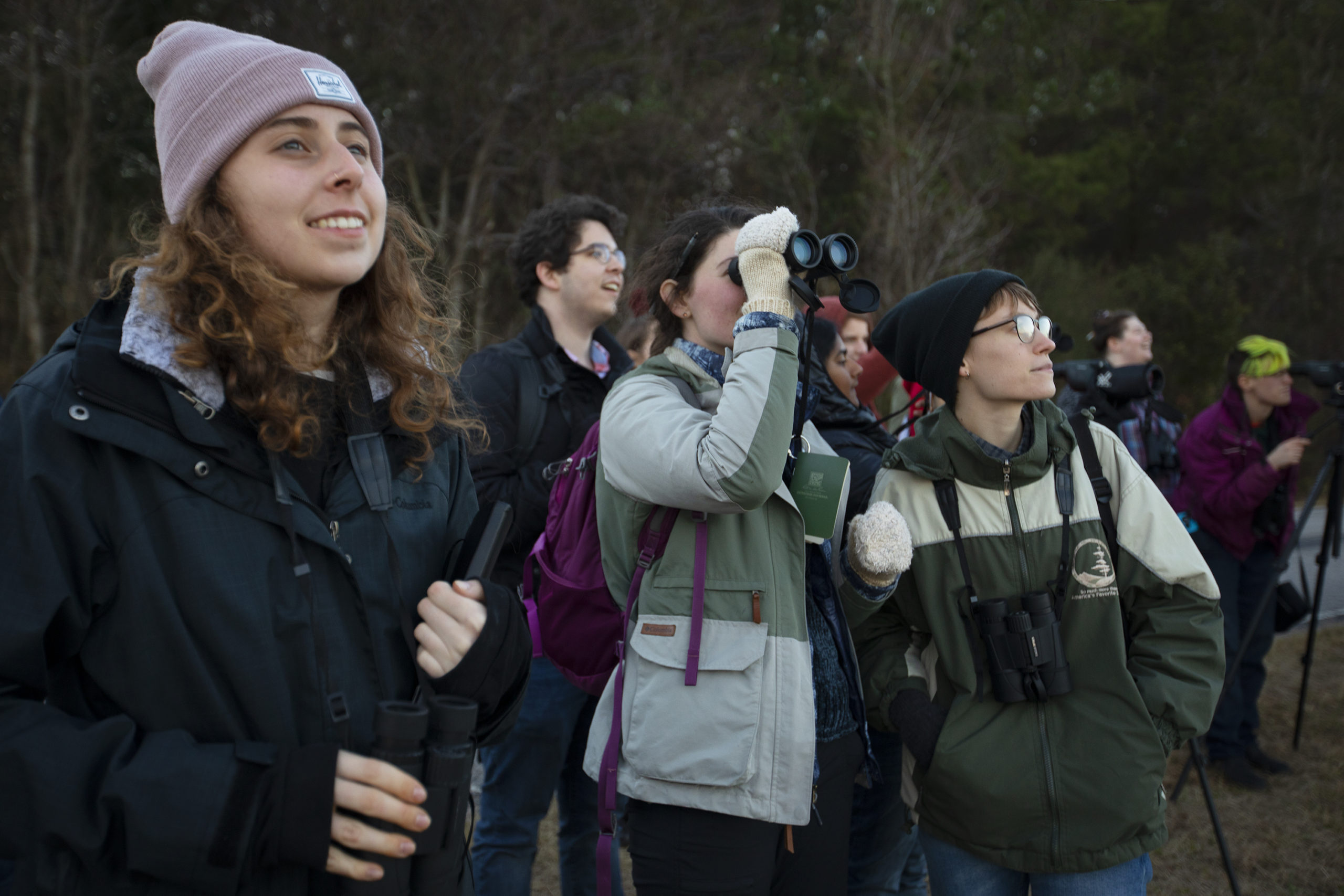 By Megan May
Earth

After hours of driving through the countryside, a caravan of UNC undergraduate students turns down a nondescript gravel road, entering the Pocosin Lakes National Wildlife Refuge in eastern North Carolina. Rounding the corner, the wooded corridor opens and students spot what they’ve traveled 170 miles for — tens of thousands of tundra swans and snow geese.

The students jump out of the cars, eyes on the sky and mouths agape, and are greeted by the thunderous chorus of up to 40,000 geese and 6,000 swans. Skyward, they can see a seemingly endless stream of birds descending upon the field in front of them.

UNC biologist Allen Hurlbert stands in front of his class. Suddenly, a few thousand birds swoop into the air, the flock twisting and turning. Like a conductor leading a great symphony, Hurlbert throws up his arms and revels in the sight.

Besides fine-tuning his identification skills, for senior Curtis McGhehee, this was the highlight of the three-day trip.  “When we arrived to the first refuge and saw the thousands of swans and geese, that was awesome. It was almost magical,” he says.

The stop at the refuge is just one of many throughout the weekend. The students are part of the course “Avian Biology,” led by Hurlbert and fellow UNC biologist Keith Sockman. Their in-class lectures about bird biology, physiology, anatomy, and evolution are reinforced by bird watching trips to places like Mason Farm Biological Reserve in Chapel Hill, Croatan National Forest near Morehead City, the Rachel Carson Reserve in Beaufort, and the Outer Banks.

Getting students in the field is a priority within the course — seeing their lectures in action.

“Biology is the study of life, that’s the definition,” Sockman says. “To study life, to some extent you have to expose yourself to the natural elements to really understand it and appreciate it. Just reading about it or seeing pictures can never replace that aspect of the education.” 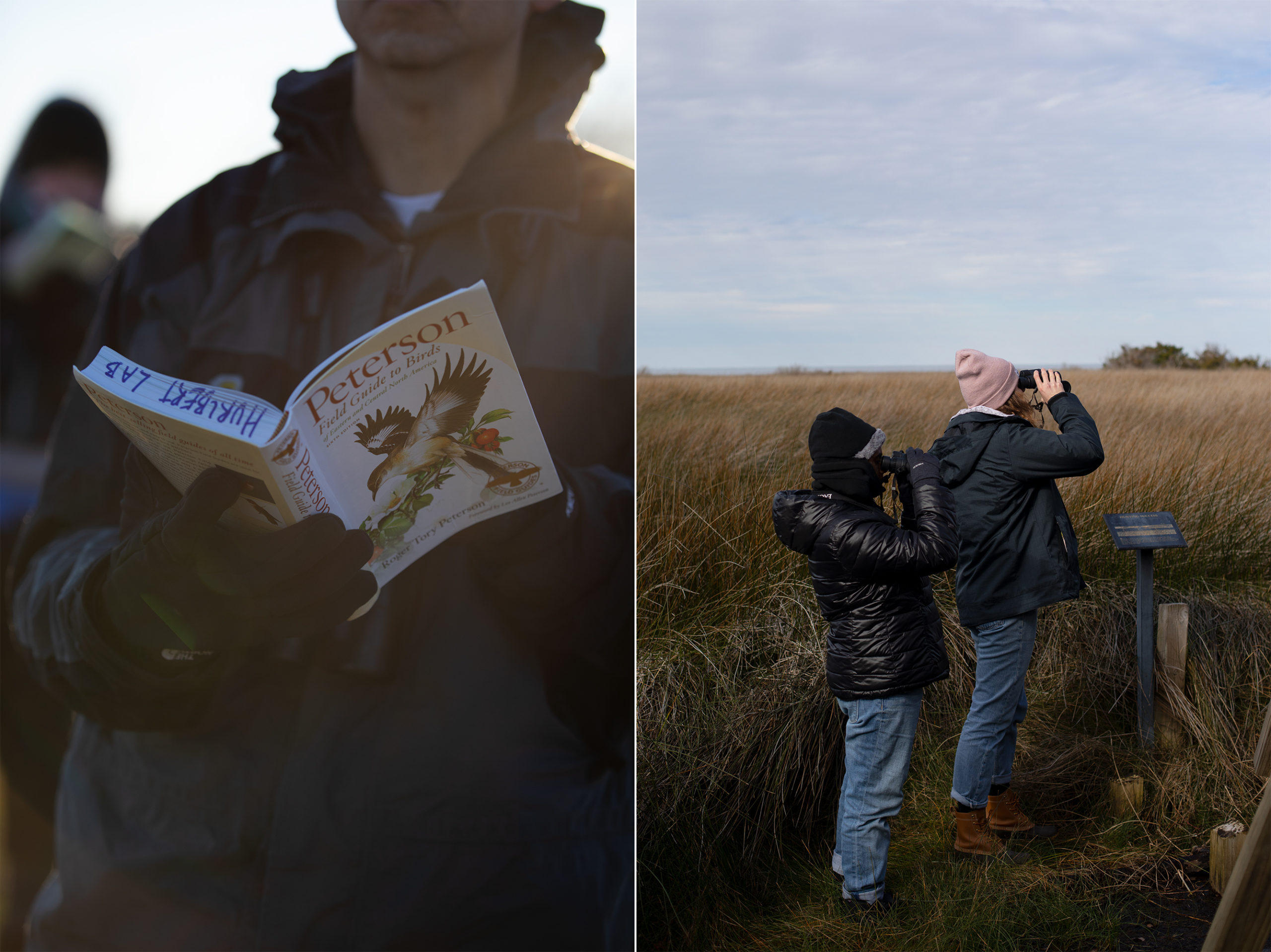 Waterfowl, seabirds, shorebirds, and terrestrial birds flock to the coastal plain due to the high density of national wildlife refuges found there — supporting a diverse combination rarely found together elsewhere in the state. 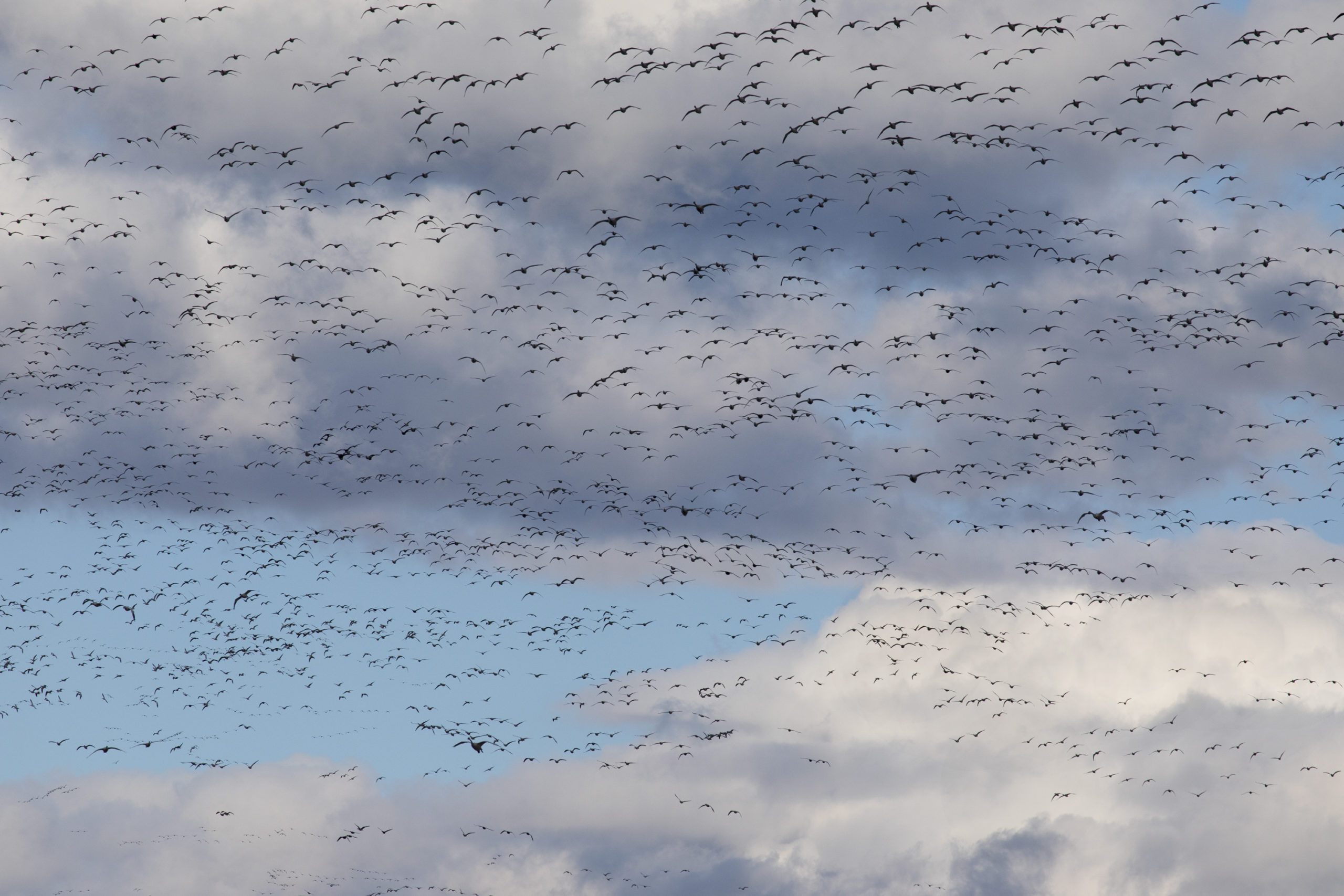 Tundra swans and snow geese fill the sky of the Pocosin Lakes National Wildlife Refuge. The birds, which breed in the arctic but migrate south for the winter, spend their days searching for food in nearby fields. Come sunset, they return to Pungo Lake to roost for the night. 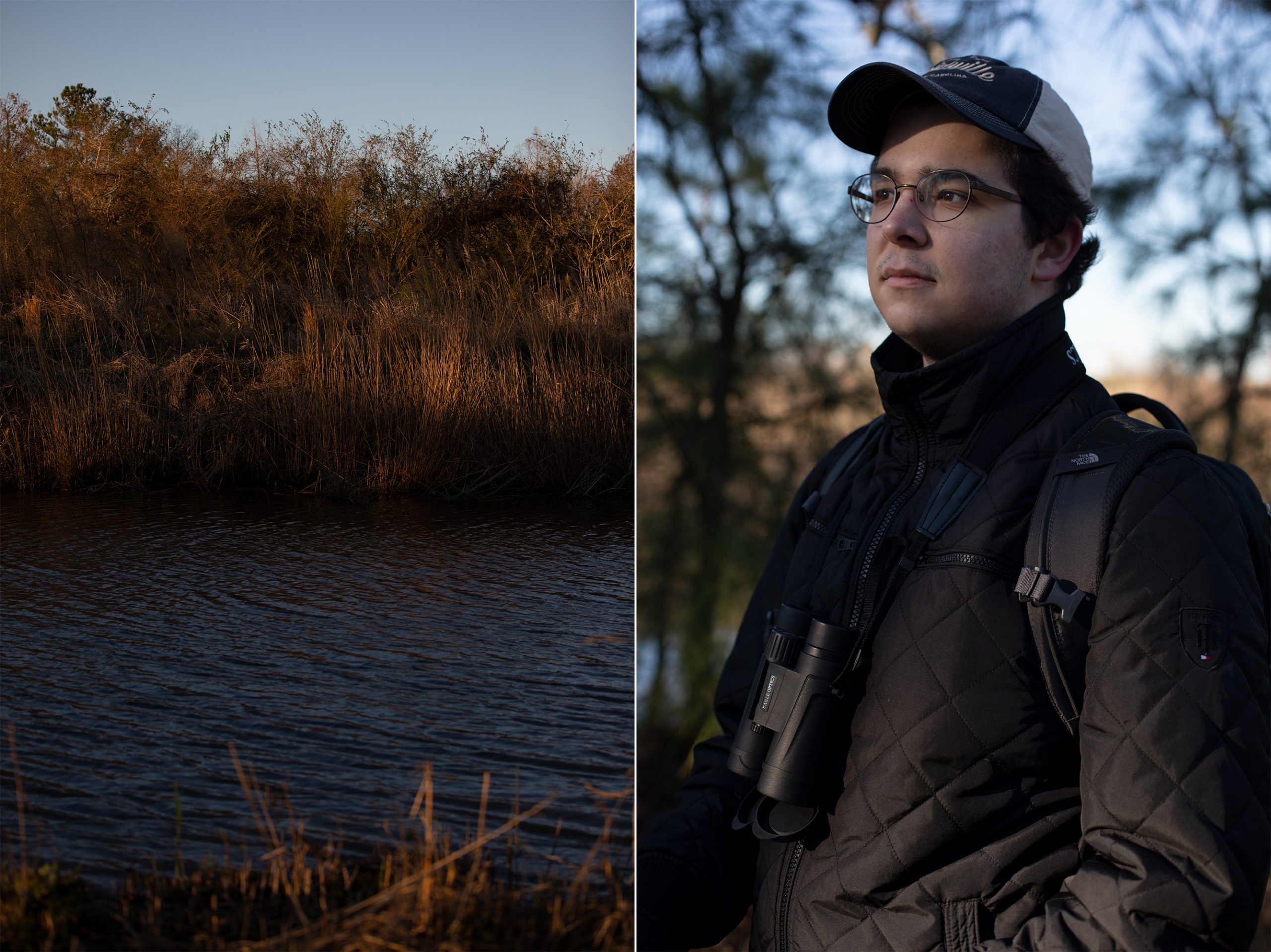 Before Curtis McGehee took this class, a duck was a duck. His mindset has since changed. Another class, “Local Flora,” instilled in him a similar skillset with plant life. “Instead of just seeing a blanket of green, now I see all sorts of different plants. It’s the same with the birds,” he says. 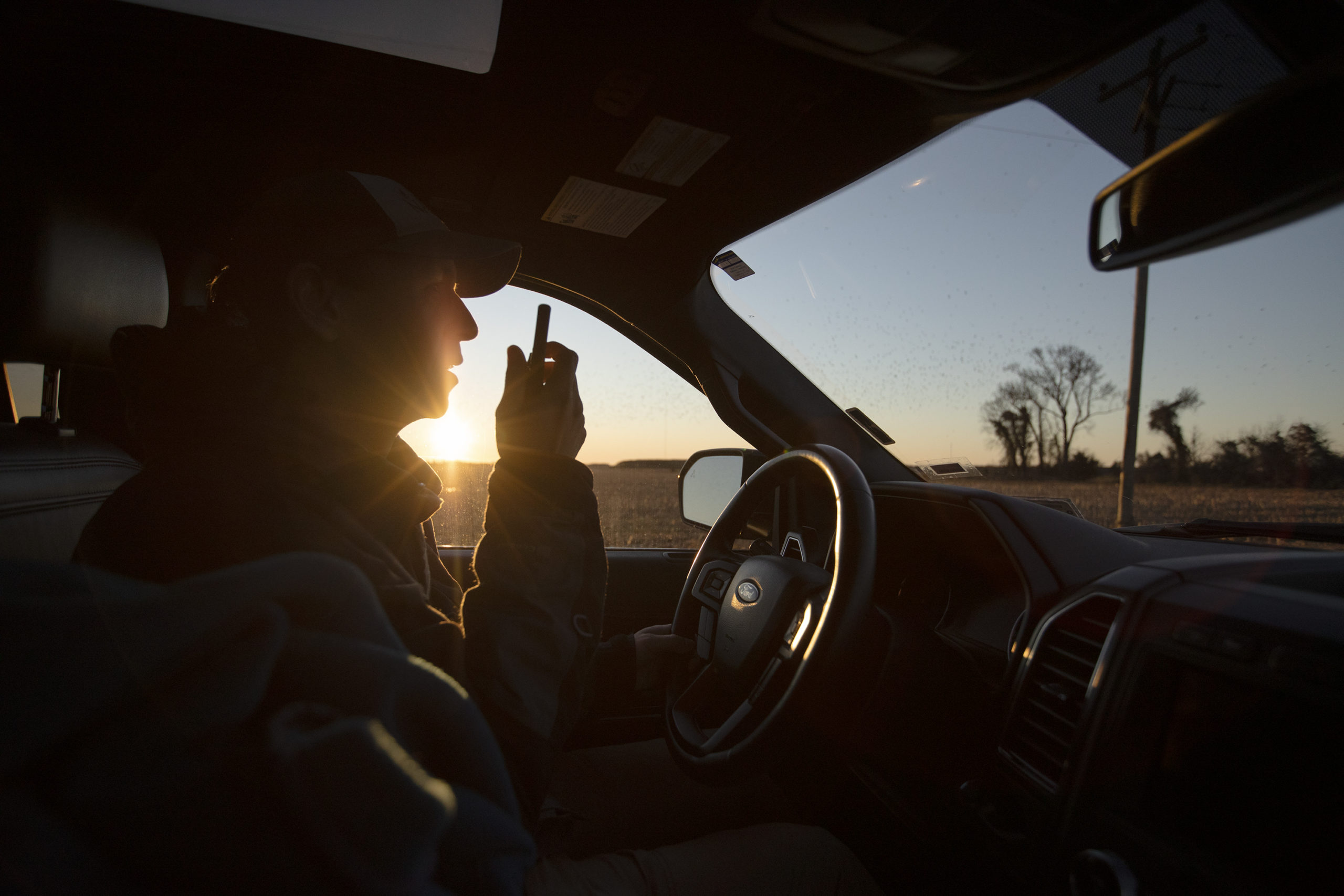 Hurlbert uses a walkie-talkie to point out a flock of birds while driving. The trip is an opportunity to not only identify birds, but to teach students about local ecology and conservation efforts — including the reliance of many species on protected areas and how humans play a role in their future. 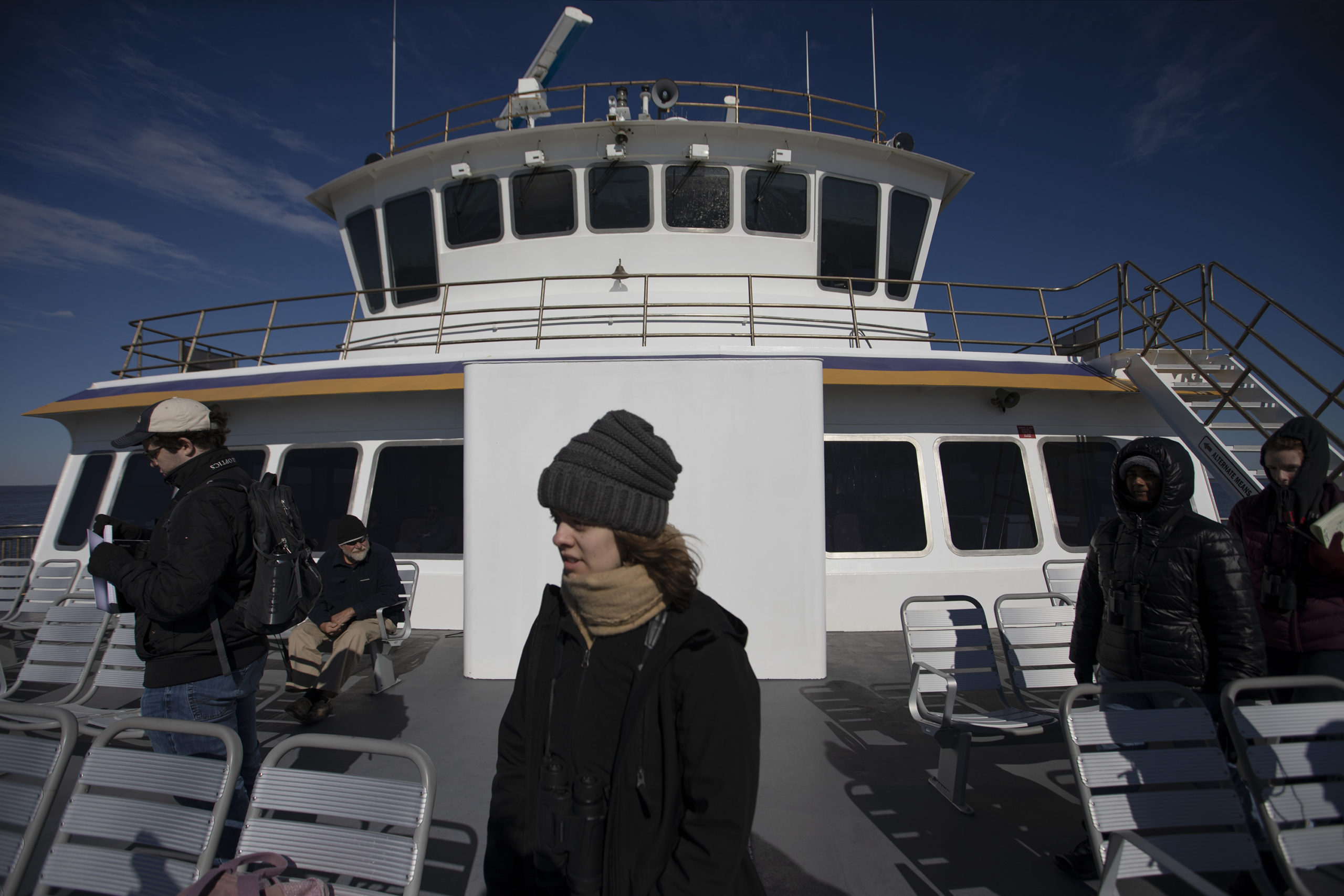 The class traveled over 600 miles during their field trip. The first day’s stop at the Pocosin Lakes National Wildlife Refuge was followed by a trip to Lake Mattamuskeet, then down to Swanquarter for the three-hour ferry ride to Ocracoke Island. Another ferry landed them at Hattaeras Island, where they drove up the Outer Banks before cutting back to the mainland to see Alligator River National Wildlife Refuge — a 152,000-acre conservation area. 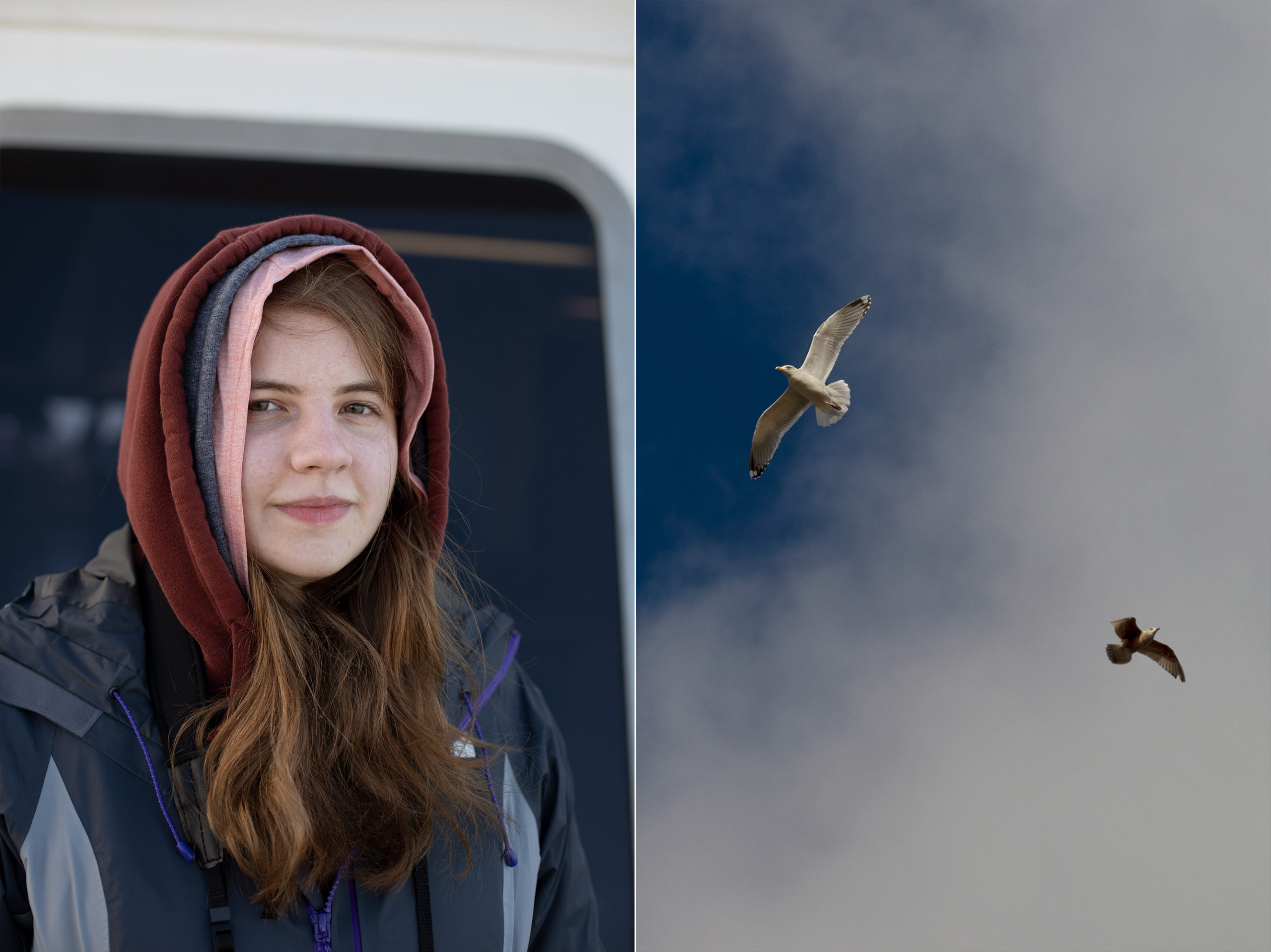 Sarah Pollack was working on starting an Audubon Society at UNC last year when she heard about the avian biology class. The course is taught every other year, so the junior had to wait a few semesters. It was well worth it. “I really like birds, a lot,” she says. “I feel connected to the natural world around me and it’s a hobby that I can do anywhere.” 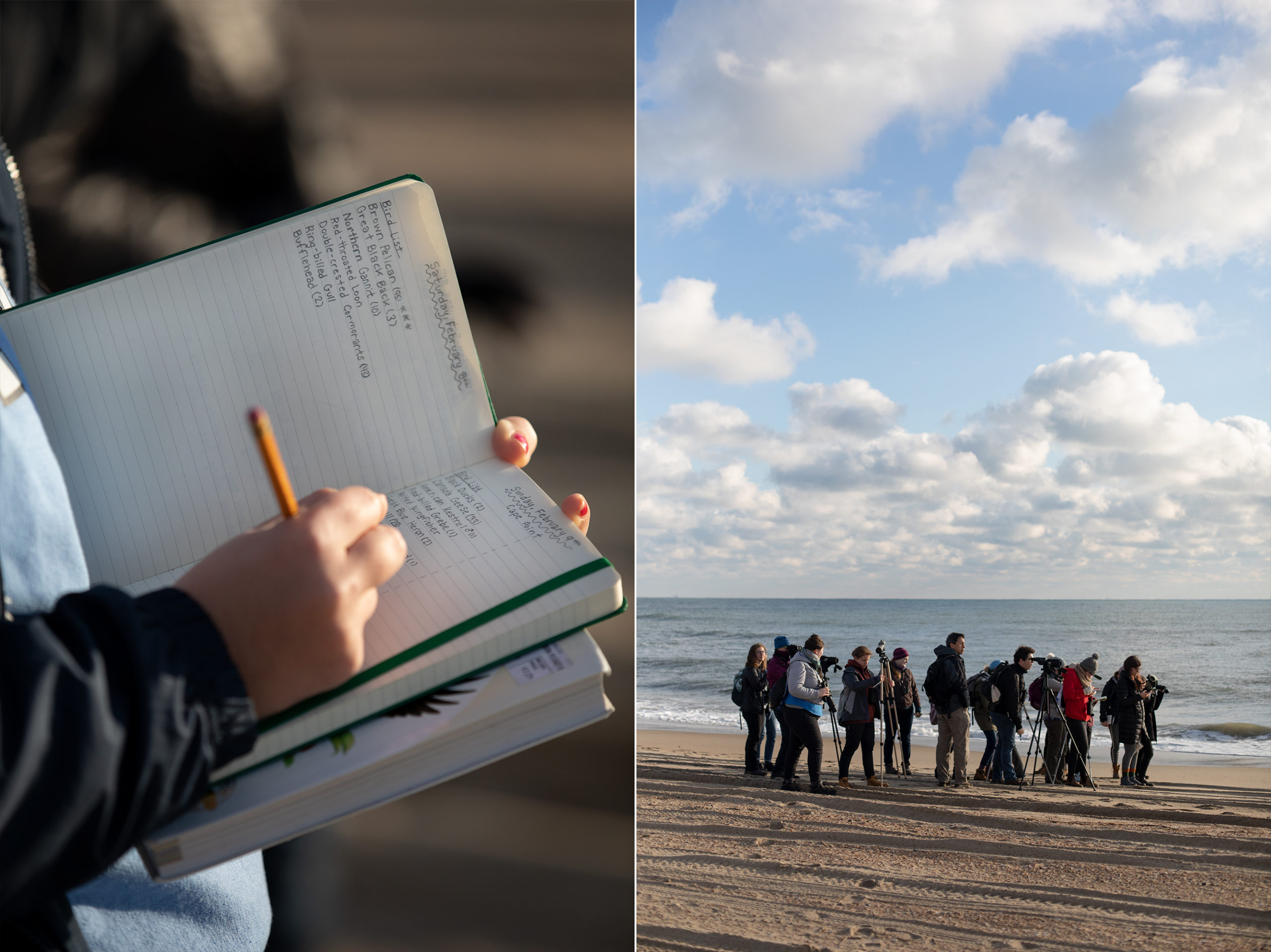 Throughout the semester, students learn to identify 150 birds by sight and sound, reinforced by weekly quizzes. During the Outer Banks trip alone, students successfully identified 79 species. 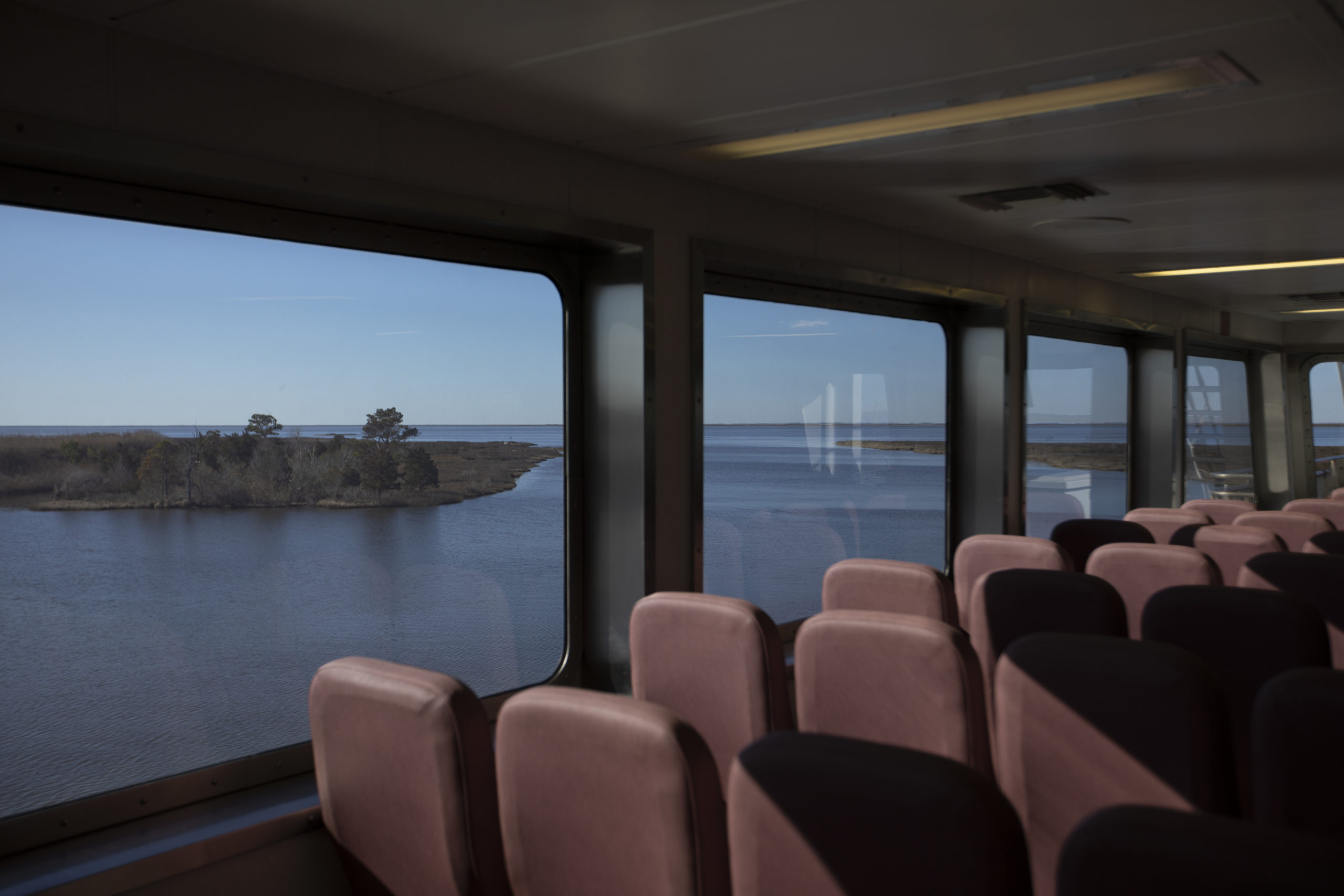 The Outer Banks is a 200-mile-long string of barrier islands off the coast of North Carolina, separated from the mainland by the Pamlico Sound. Its location makes it vulnerable to hurricanes and erosion, altering the geography of the islands over the centuries. In 2019, Hurricane Dorian made landfall here with 100-mile-per-hour winds, seven-foot storm surges, and 14 inches of rain. Development and rising sea level due to climate change makes the islands even more defenseless to these environmental hazards. 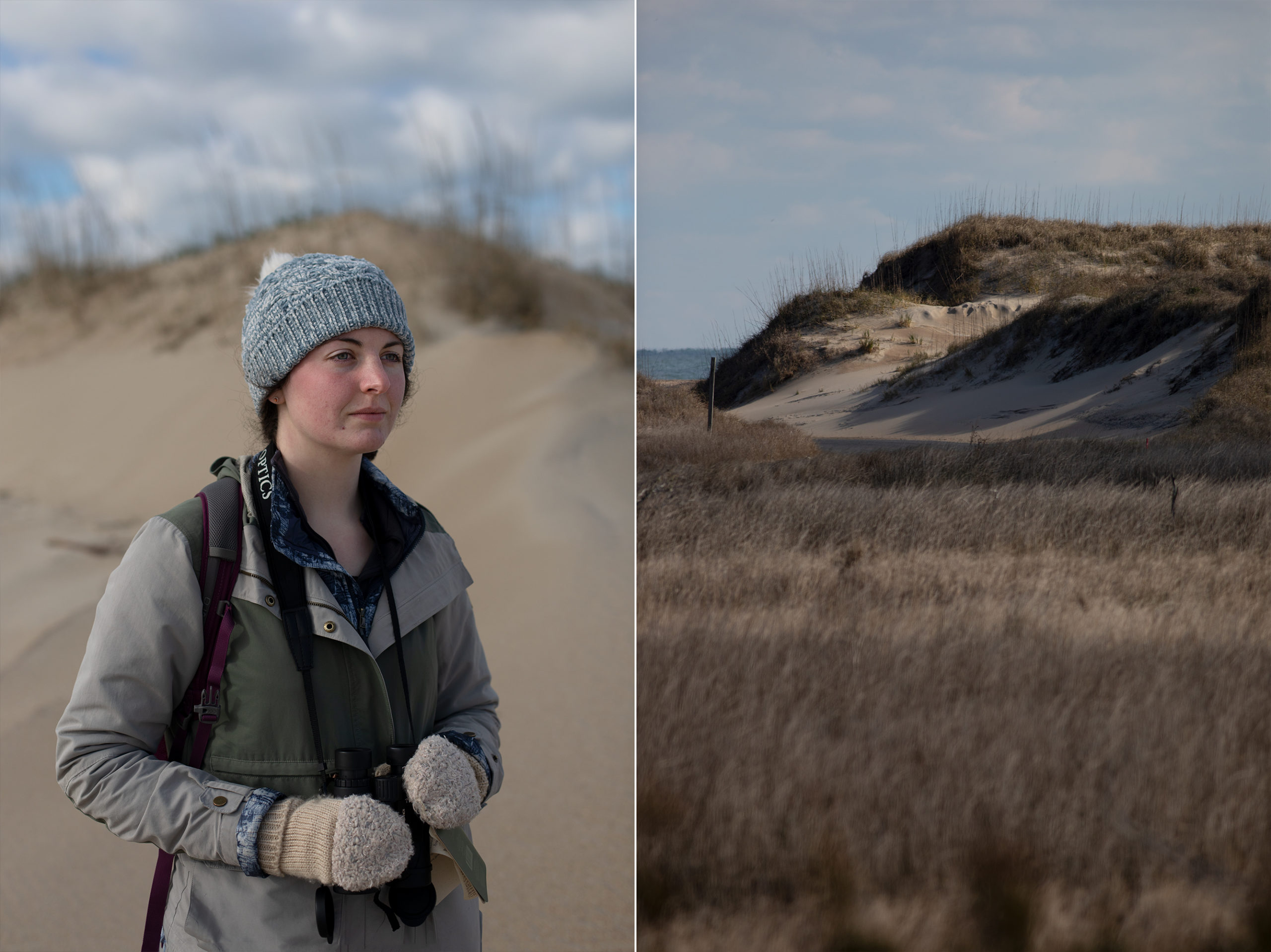 UNC junior Anna Scotton pays close attention to Hurlbert’s teaching methods in the field as she pursues a career in environmental education. “Something I’m really passionate about is just getting people excited about nature, and I feel like Dr. Hurlbert has done a really great job with that. It takes a lot of skill to lead nature tours and share information, especially scientific information, without it just kind of washing over people,” she says. “When he gets excited about what we’re seeing we get excited, too.” 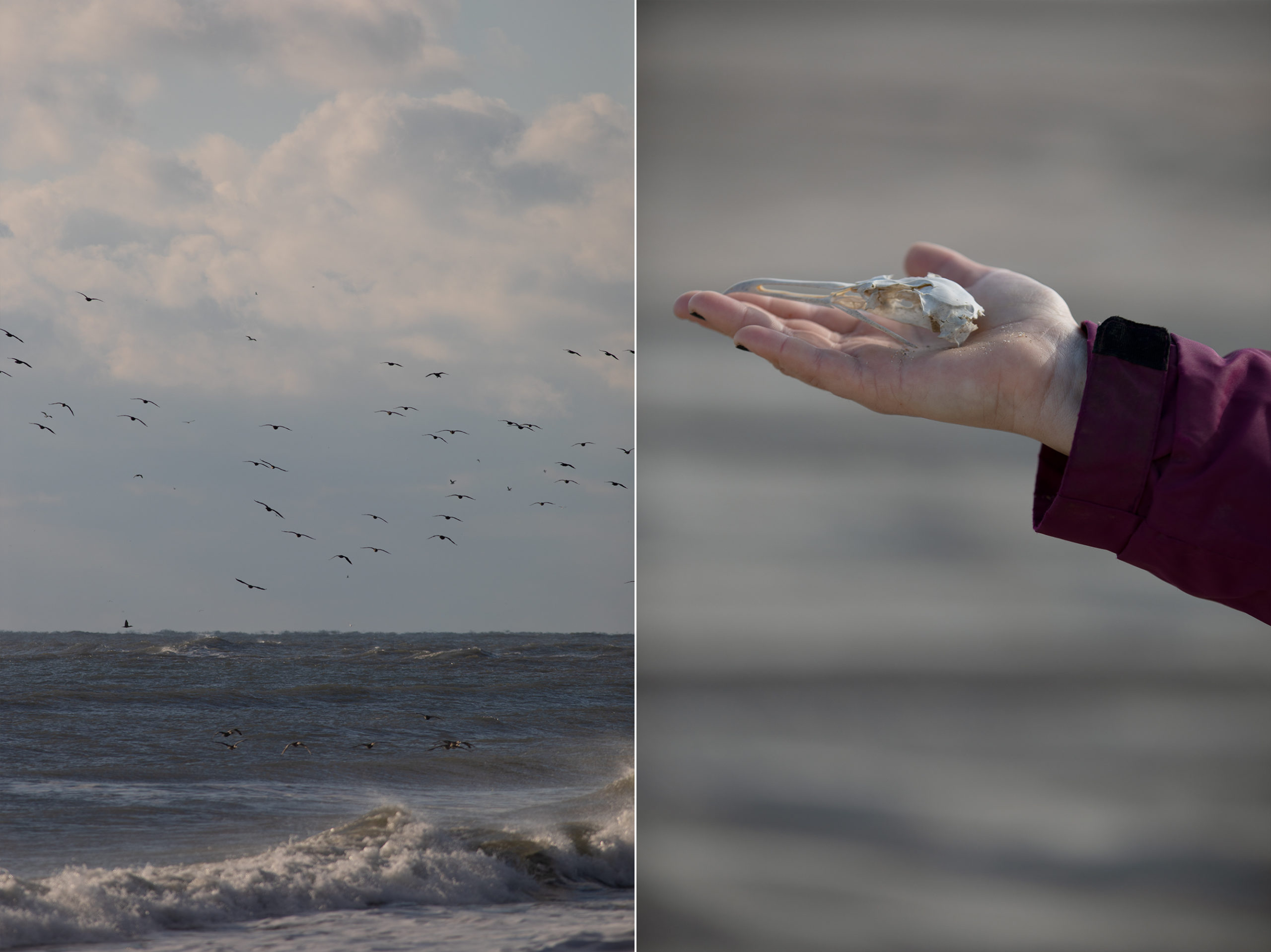 The students make their way up the Cape Hattaras National Seashore on a morning hike, rounding the corner to discover hundreds of gulls gathered on the beach. They spot a female peregrine falcon just beyond the crowd, feeding on a fresh kill. She’s hard at work plucking the gull’s feathers before digging into the meat, but her breakfast is soon interrupted. A hiker with dogs spooks the birds, sending them flocking and creating the perfect opportunity for turkey vultures to swoop in and steal the meal.

“We get to witness predation events, mating behavior, courtship behavior, and foraging behavior,” Hurlbert says. “I think the trip brings all of those concepts to life in a much more exciting way than you can get from a textbook or just talking about it.” 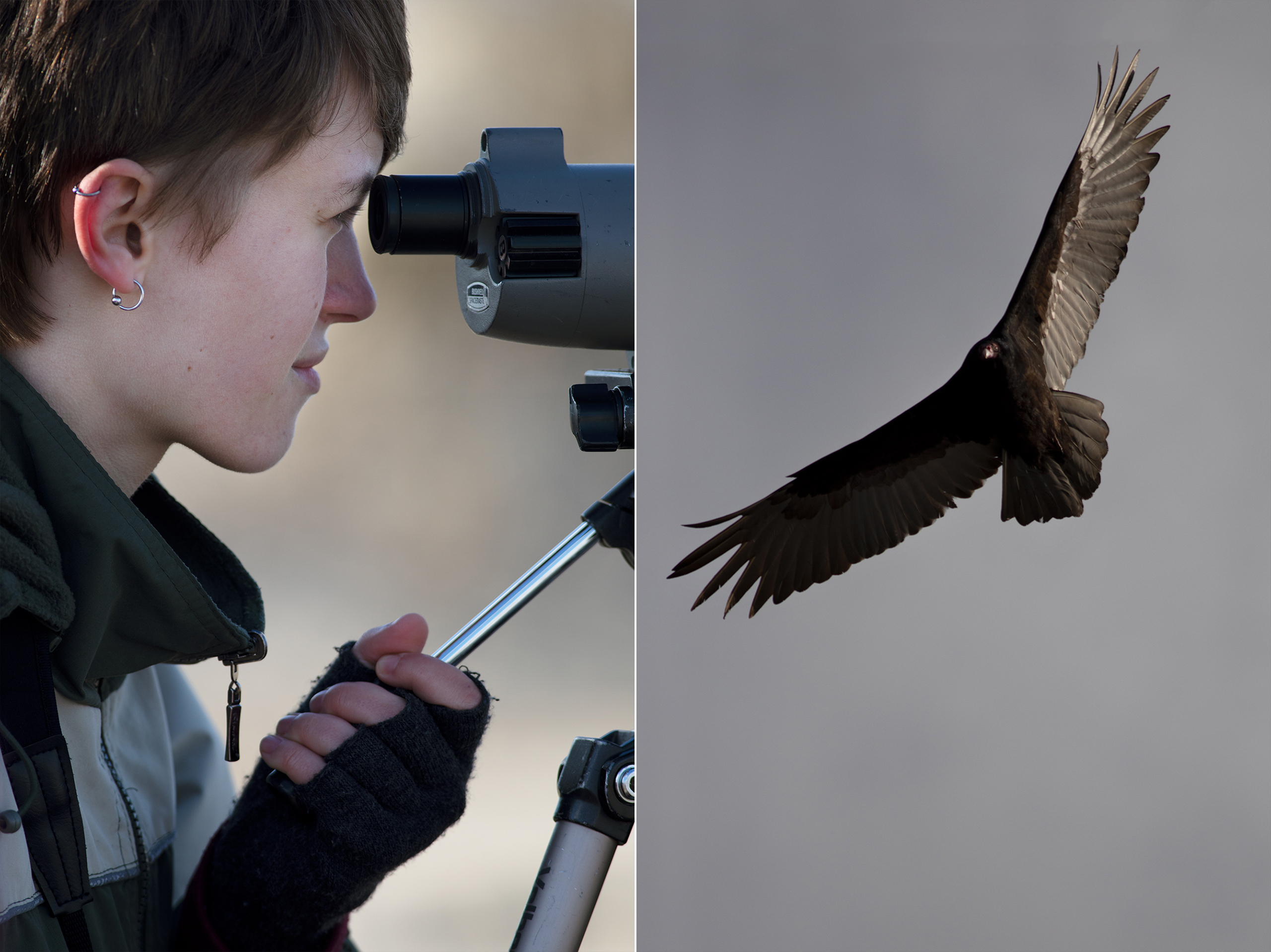 Researching the physics of bird flight spurred a broader avian interest in Sophia Chizhikova. Hurlbert and Sockman’s class feeds that curiosity. “It’s been a good experience,” the UNC senior says. “Even if birding is just a hobby in the future, it’s taught me a lot about how to approach wildlife.” 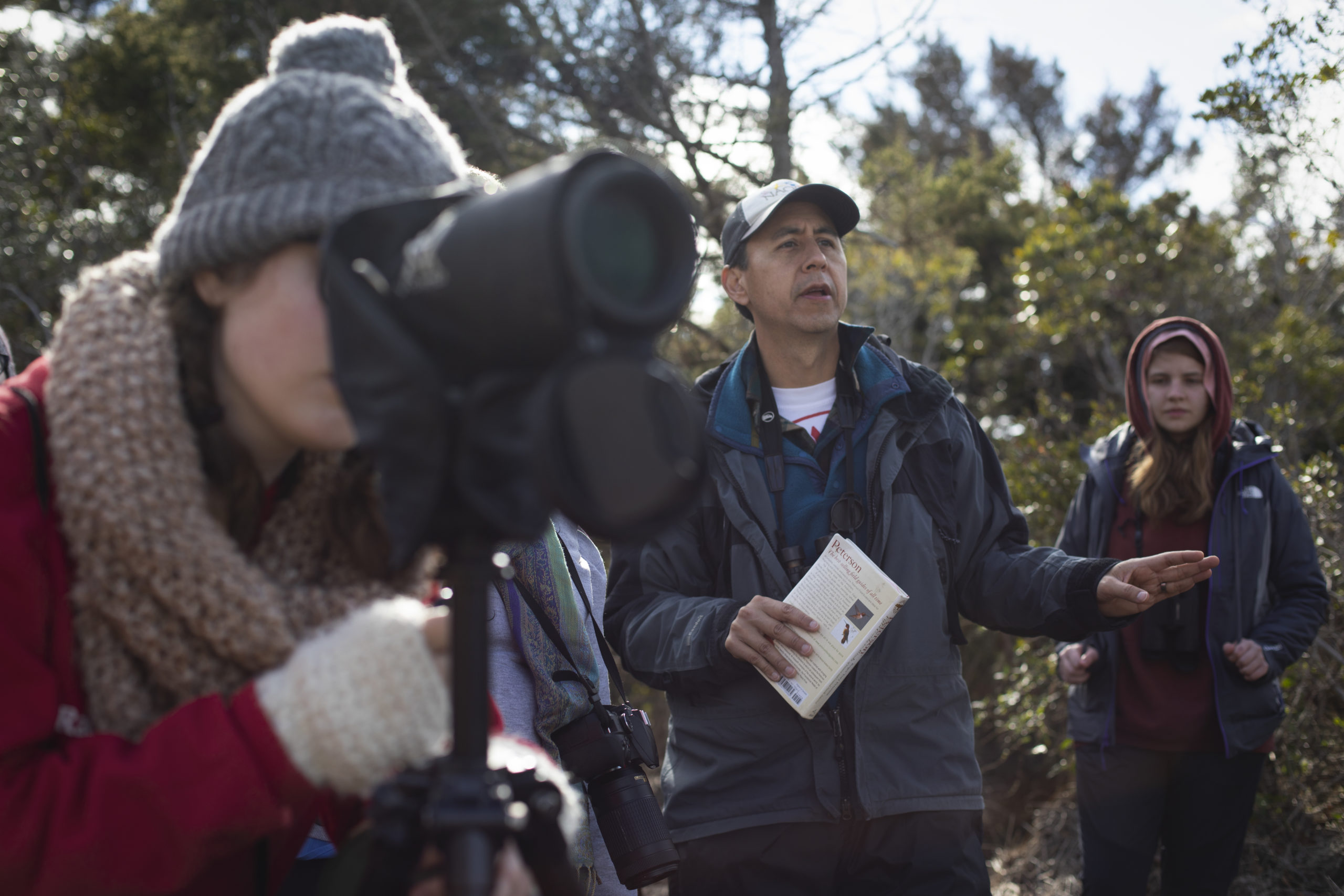 “I just love the idea of helping these students notice what I notice when I’m outside,” Hurlbert says. “It really is a unique weekend. Most people have not been to the places we’re going, and you can’t see what we saw anywhere else in the state. I’m just trying to make sure they’re appreciating that as we’re going around.” 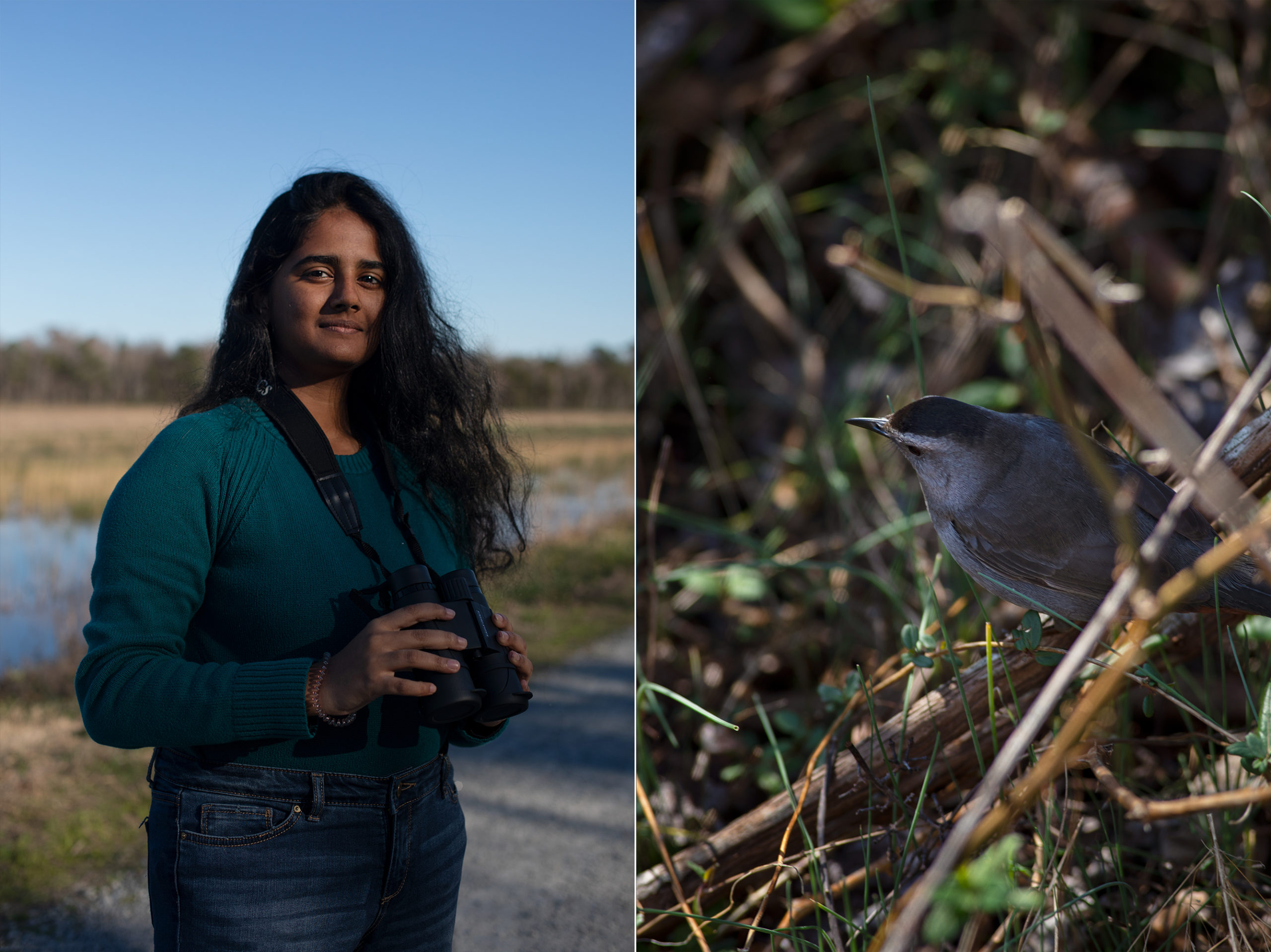 Vaishnavi Siripurapu fondly recalls visiting the local public library with her mother to rent bird documentaries after her family immigrated to the United States when she was five years old. “It reminded my mom of the birds we had in India,” the UNC sophomore says. “We’d go home and watch them, and slowly we started learning some English through that. I remember she’d always say, ‘I just love the birds.’” 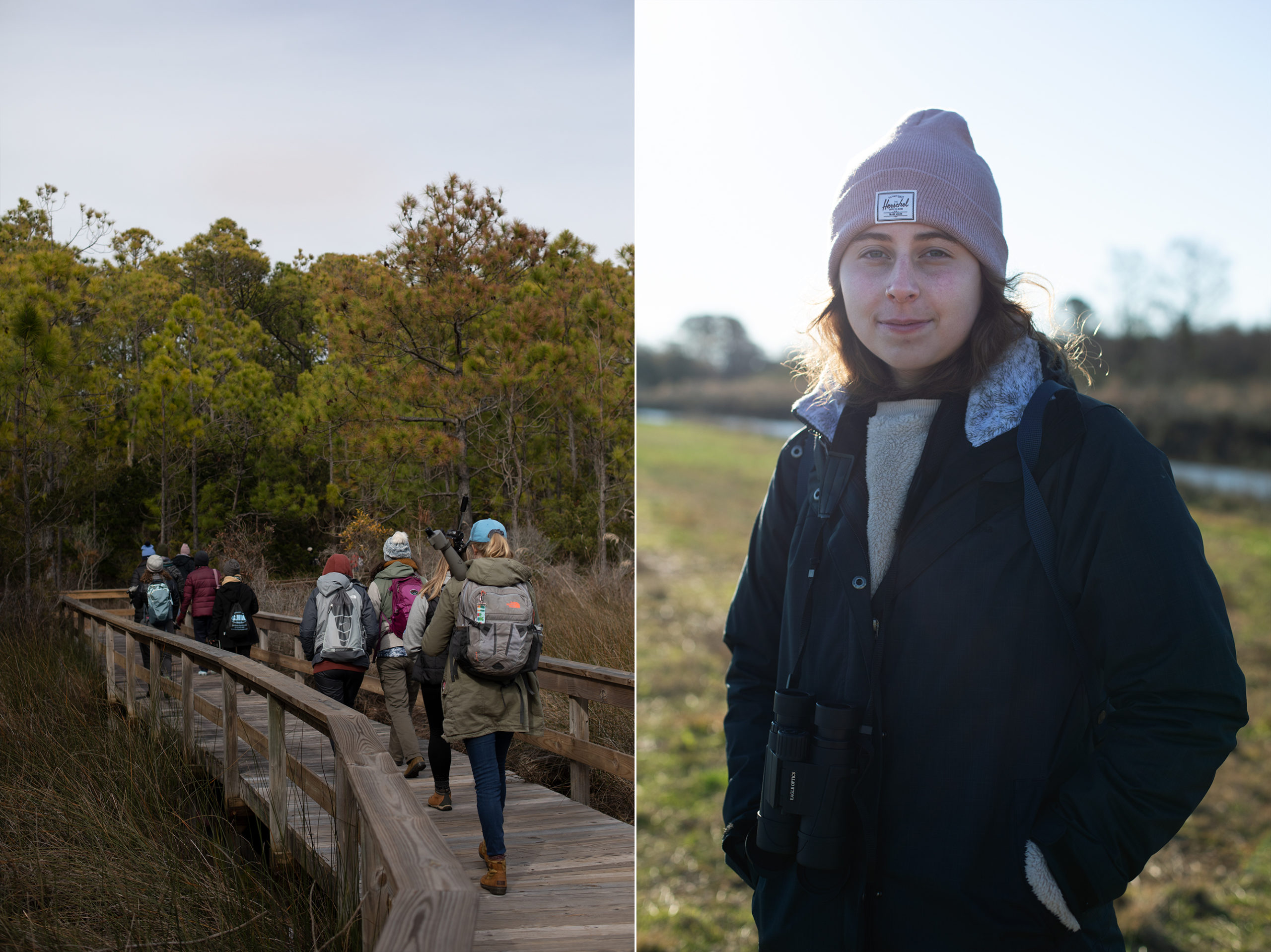 UNC senior Maddie Peloff wanted to cap off her undergraduate experience with something unique and fun. After she graduates this spring, Peloff plans on taking a break before returning to school in pursuit of a medical degree. “It’s a good last class to have at Carolina,” she says. “It’s different than anything I’ve ever taken before.” 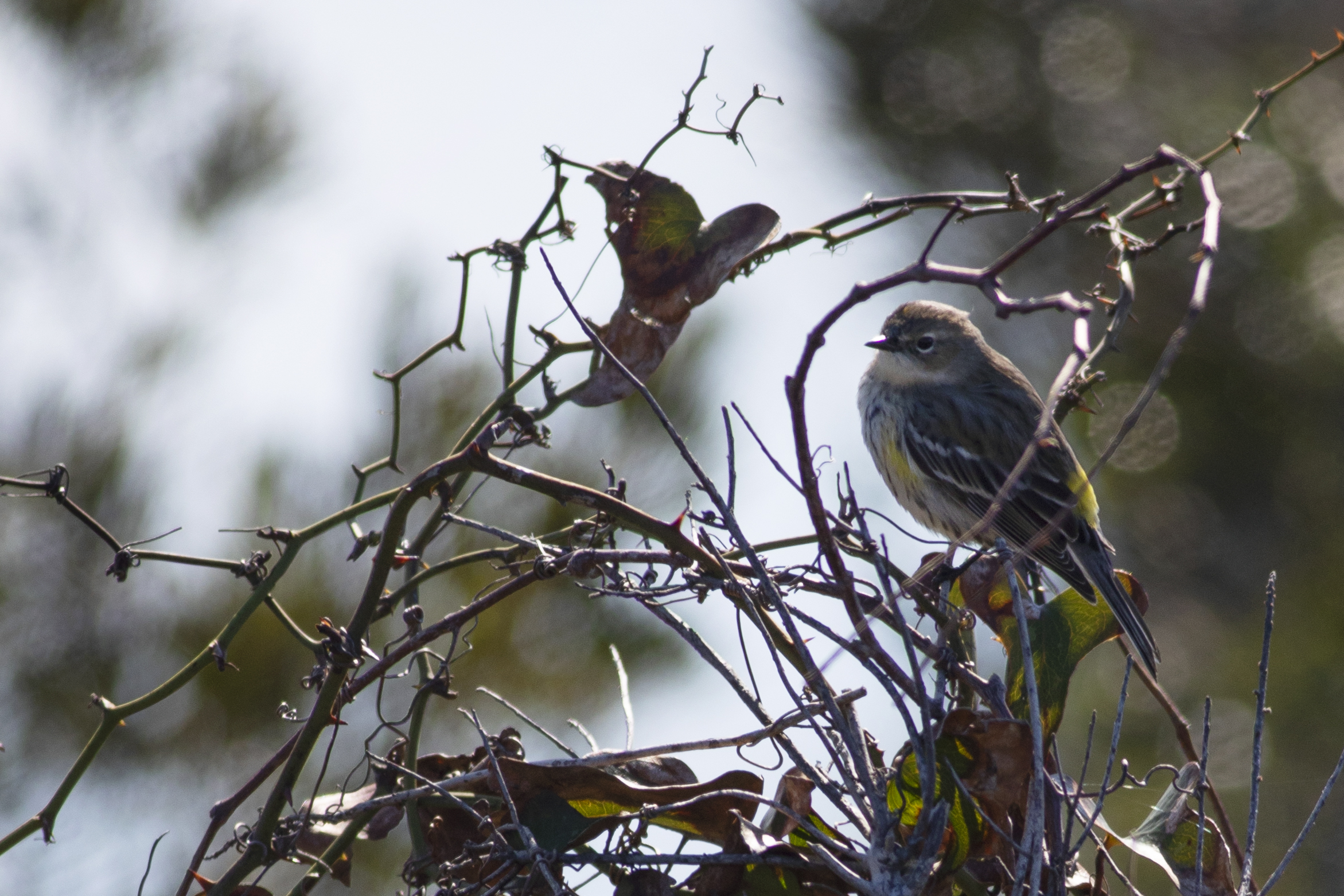 Hurlbert and Sockman hope their class field trips leave an impact on students’ undergraduate education long after the weekend is over. “Sure, I could just show students pictures and play audio, but in terms of practical knowledge, it’s when you’re walking around outside that you can really apply these lessons,” Sockman says. “My longstanding memories as an undergraduate are almost exclusively from field trips — they’re not from reading a textbook or listening to lectures.”

Allen Hurlbert is an associate professor in the Department of Biology within the UNC College of Arts & Sciences.

Keith Sockman is an associate professor in the Department of Biology within the UNC College of Arts & Sciences.

Curtis McGehee is a senior majoring in biology within the UNC College of Arts & Sciences.

Sarah Pollack is a junior double-majoring in statistics and analytics and art history within the UNC College of Arts & Sciences.

Anna Scotton is a junior majoring in biology within the UNC College of Arts & Sciences.

Sophia Chizhikova is a senior majoring in biology within the UNC College of Arts & Sciences.

Vaishnavi Siripurapu is a sophomore double-majoring in biology and women’s and gender studies with a minor in medical anthropology within the UNC College of Arts & Sciences.

Maddie Peloff is a UNC senior majoring in biology within the UNC College of Arts & Sciences.