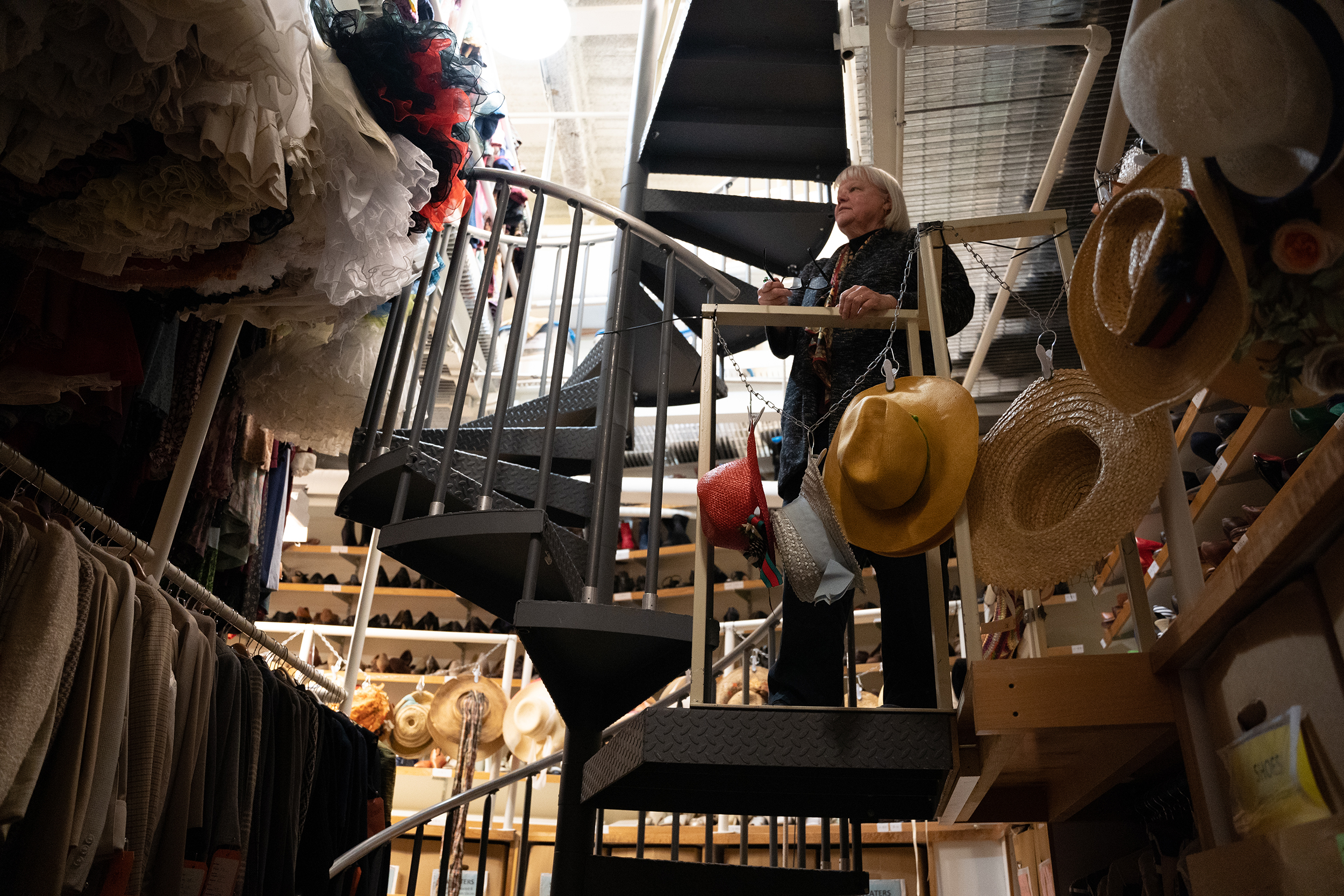 Stacks of Vogue from the 1960s and ’70s and boxes full of 19th-century fashion periodicals fill the bookshelves of Bobbi Owen’s office. Her hand glides over the spines, lifts a few fading copies of newspapers, and pulls the June edition of Harper’s Bazaar from 1903. The pages are filled with photos of women in modest but highly structured dresses, held in shape by corsets hidden under layers of richly colored silk. 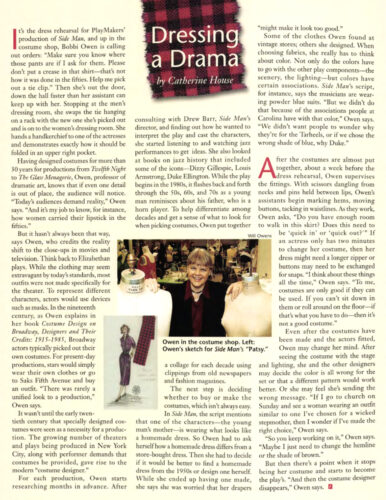 Endeavors featured Owen in the Spring 2001 issue. At that time, she had already been working as a costume designer at UNC for 30 years.

Endeavors featured Owen in its Spring 2001 issue. At the time, she’d already been working as a costume designer for 30 years. Now, with 50 years of experience and over 150 productions under her belt, Owen has consulted countless magazines, newspapers, and records of historical fashion — but Harper’s Bazaar remains her favorite.

“I am a historian by nature,” Owen says. “My preferred way to work is to really throw myself into whatever the production’s time period is.”

Immersing herself in the past helps Owen understand what fashion was like for different socioeconomic classes. But it’s more than just understanding the fashion trends of the times. Owen stresses the importance of knowing all the other aspects of life that inevitably influence the way people dress: What did the time period sound like? What kinds of chairs and couches did people sit on? What technology was available? How long does it take them to get ready in the morning?

The text of the productions themselves are also critical resources for Owen.

“Costume designers know the plays as well as dramaturgs and directors,” she says. “I look hard for things that tell us a little about the clothing forms, but also about the people wearing them.”

Sometimes, the stage directions and dialogue of a play will explicitly describe what someone is wearing, but it’s the hints in the text that define who a character is and inform what they might wear that Owen finds exciting.

“You can tell a lot about a person based on how they’re dressed,” Owen says. “But what needs to be on a character? What will tell enough about a person but not too much?”

If an audience saw someone wearing glasses and a wedding band, they would assume the character has bad eyesight and is married, but they wouldn’t be able to tell that the character also loves to play racquetball.

Stacks of Vogue and fashion periodicals line Owen’s bookshelves. The photos and trends within them inspire the collages and sketches she uses to create her designs. (photo by Elise Mahon)

“The usual length of a production is about two hours — and so you’ve got to bring the audience into the play relatively quickly,” she says. “It’s important that costumes express that character, but then allow for growth as well, so the audience can be surprised.”

After amassing research from magazines, periodicals, advertisements, and the play itself, Owen creates a collage with fabric samples and some of her own sketches to present a visual representation to the director and creative team.

“That’s often a way to find out what directors don’t like as much as it is to find out what resonates with them,” she says, adding that the wonderful thing about collage is if a director doesn’t like something, she can just peel it off right then and there. 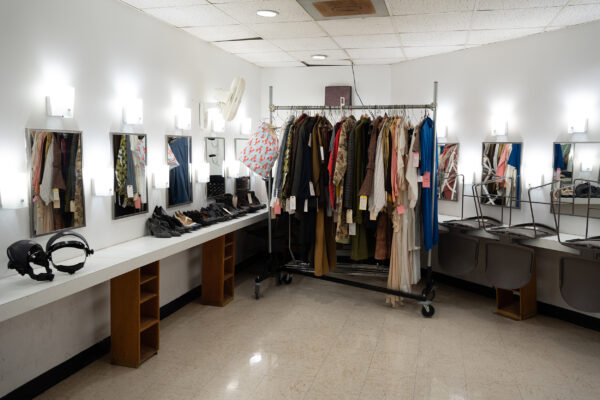 Potential costumes for upcoming PlayMakers productions hang on a rack in the men’s dressing room, which is currently being used for more spacious, COVID-19-friendly fittings. (photo by Elise Mahon)

Once the designs have been completed and approved by the director, the next step is to pass them along to the skilled seamstresses in the costume workshop who pattern, cut, stitch, and sew the fabric — which is carefully selected by Owen — to bring it to life.

Collaboration doesn’t just happen with the creative team and seamstresses, but with the actors wearing her costumes. Ray Dooley is a professor of acting and has been a member of PlayMakers since 1989, starring in countless productions like “She Loves Me,” “A Christmas Carol,” and “Ragtime.” His years with PlayMakers and in the Department of Dramatic Art have led him to frequently work with Owen, something he says is always a joy that he looks forward to.

“The first time you encounter the costume is informative and inspiring,” Dooley says. “There’s a real dialogue back and forth among the designer and the actor about alterations that maybe need to be made to keep true to the silhouettes and details of the time.”

These are when the magical moments happen for Owen, weeks before the audience even sees her costume for the first time on opening night.

“It’s a treat when you get into a fitting room and something goes on a person. They look at themselves in the mirror and see the character, and they really see who that is,” she says.

As much as a costume should look the part, it has to feel the part as well. Working through what feels right, what’s comfortable, and what maybe doesn’t make sense for an actor’s character in action is a huge part of finalizing the costume. Sometimes that means hiding a zipper under ornate, historically-accurate buttons or recreating a stiff-fabricked coat from the early 1900s with a more forgiving material. 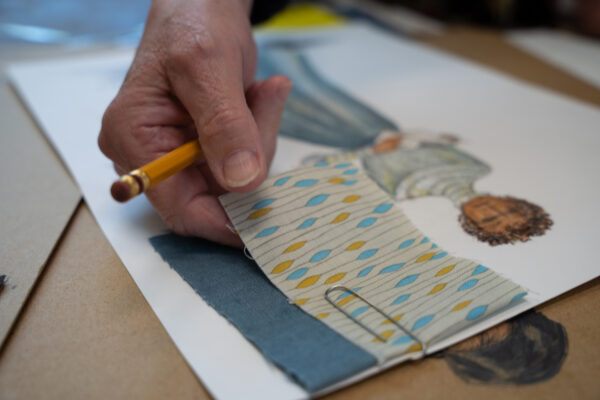 Picking out fabric is one of Owen’s favorite parts of the design. The texture is just as important as the pattern, she says. (photo by Elise Mahon)

“The costumes have to enhance their bodies but sometimes constrain them, too — but not so much that it inhibits a performer from doing what they need to do,” Owen says. “They help inform how a character stands, sits, and walks; how they wear their hair; and what kind of mannerisms they have.”

Owen makes her complex designs look effortless. Whether designing over 30 costumes for “She Loves Me,” or a single suit for “A Christmas Carol,” he says Owen enhances the ideas from the creative team and actors to create costumes that help both the actor and audience understand the character and tone of the production.

“From an actor’s point of view, effective costuming does much of the work of bringing a character to life,” Dooley says. “If there is a sense that the costuming side of the production is being well taken care of by a talented and expert designer, that helps the actors pay attention to their own work. And in all of these cases, Bobbi is among the best of the best.”

A self-professed lover of fabric, Owen takes a tactile approach when choosing the materials and patterns of cloth to use in her designs. Throughout the years, the fabrics and materials used to construct costumes have changed as innovation creates new alternatives.

“Before using thermal plastics, you would use metal to create the armor for characters, and it would be so heavy,” she says. “But now you can make them in foam and lightweight plastics.”

And there are now high-quality polyester alternatives to silk that allow costumes to still look historically accurate while also being sturdier and requiring less maintenance. Besides technical innovations in costume design, Owen says she has also experienced firsthand the growing trend of inclusion in costume design, theater, and at UNC.

“My generation was a time when women were pretty seriously undervalued in the workplace and having a somewhat androgynous name got me into places where people were expecting a man,” she says.

She recalls common recruitment practices that incentivized the hiring of women in the mid-1970s, which is when she first joined the university. Unfortunately, many places would hire a woman and subsequently run them off so they could then hire a man. Nearly 50 years later, Owen is not only an accomplished costume designer at the university, but a chaired professor. She also served as the senior associate dean for undergraduate education in the College of Arts & Sciences from 2004 to 2014.

“I’m really proud of having been part of that wave here,” she says, stressing the importance of having faculty that look like and are representative of the student body they serve.

Most recently, Owen has partnered with Adam Versényi, professor and chair of the dramatic art department, to produce a book, “PlayMakers Repetory Company: A History,” which celebrates the theater’s nearly 50-year history. PlayMakers was founded in 1975, just one year after Owen joined the faculty. Who better to help tell its story?

When it comes to the history of costume creation, Owen teaches her students about various forms of traditional dress across cultures and asks them to consider how clothing contributes to identity.

“I hope that I instilled in some people the sense of wanting to not just settle for the first thing that they find visually interesting, but to keep looking deeper.”

Bobbi Owen is the Michael R. McVaugh Distinguished Professor of Dramatic Art in the Department of Dramatic Art within the UNC College of Arts & Sciences and a resident costume designer at PlayMakers Repertory Company.

Ray Dooley is a professor of acting in the Department of Dramatic Art within the UNC College of Arts & Sciences and a resident actor with PlayMakers Repertory Company.