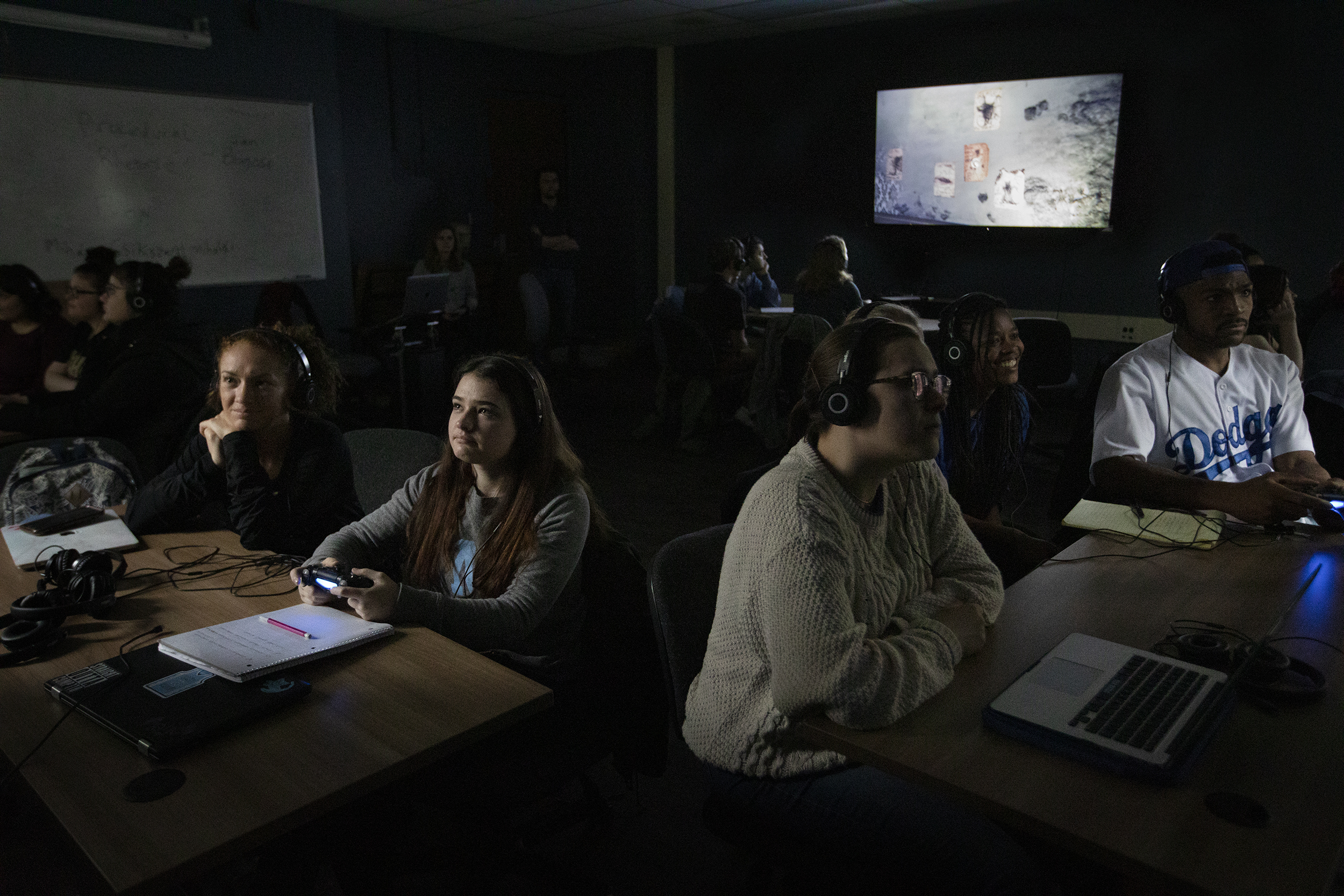 Students play "Layers of Fear" during their "Horror and the Global Gothic: Film, Literature, Theory" class. Photo by Megan May.
By Emily Davis
Creativity

It’s the 19th century. An artist navigates the network of narrow hallways and claustrophobic rooms throughout his manor. Each room contains clues to his horrific past and the tools needed to complete his final painting. His journey through the manor is a descent into madness — light becomes scarce, and the world begins to distort in terrifying ways. The space around him begins to shift. Writing on the wall says “don’t turn back,” but something not quite human is lurking around the corner. What will he do?

If he doesn’t decide, he will remain trapped there. And Guillermo Rodríguez-Romaguera’s students might lose participation points. Rodríguez-Romaguera’s class, “Horror and the Global Gothic: Film, Literature, Theory,” explores the horror genre across literature, film, and video games. Every Friday, his students group together around five screens to take on the role of the mad artists in the first-person horror game, “Layers of Fear.” Rodríguez-Romaguera calls it “very Shining-esque.”

As a teaching assistant professor in the Department of English and Comparative Literature, Rodríguez-Romaguera’s research focuses on the horror genre and the issues of politics, gender, and race that surround it. Horror, he believes, is the most participatory genre of cinema and intentionally engages with audiences to draw out reactions, similar to video games. Likewise, modern video games are increasingly cinematic. Some recent, big-budget games even feature famous actors as characters.

“When people think of video games, sometimes they only think of violent, first-person shooter games,” Rodríguez-Romaguera says. “There are so many games that are not violent, that have nothing to do with what we think video games are.” Many games, he continues, feature engaging, immersive narratives that encourage players to think critically.

A 2017 University of Glasgow study found that commercial video games can, in a relatively short period of time, develop undergraduate skills involving resourcefulness and adaptability. Besides students’ positive perceptions of learning through games, the study found the collaborative environment improves student communication skills and teamwork.

While his previous courses focused on literature and cinema, video games allow Rodríguez-Romaguera to incorporate new lessons on audience experiences and decision-making into his syllabus. It’s why he was so excited for a chance to design this new course in the Greenlaw Gameroom.

The first game-centered classroom at UNC, the gameroom began hosting classes in Fall 2019 and is outfitted with five PlayStation 4s, a Nintendo Switch, and five large LCD television screens. It also has an ever-increasing library of games, both digital and board games, based on instructor need.

The space is the brainchild of second-year PhD student David Hall and teaching associate professor Courtney Rivard. Rivard’s work focuses on using digital platforms in higher education, and Hall has been a game enthusiast since he was old enough to steal his brother’s Nintendo 64 controller. Hall’s interest took an academic turn as an English and computer science undergraduate at the University of Virginia. Hall wanted to challenge traditional academic thinking by analyzing games as literary texts.

When Hall arrived as a first-year graduate student in the English and comparative literature department in 2018, he joined the Digital Literacy and Communications (DLC) Lab. Directed by Rivard, the lab promotes hands-on learning and teaching through digital technology.

Hall and Rivard, with help from Department of English and Comparative Literature Chair Mary Floyd-Wilson and students within the DLC, concepted a special initiative to promote playful learning through games. The result? A gameroom.

The newly renovated room 316 in Greenlaw Hall is hard to miss. Surrounded by whitewashed classrooms with faded tiles, the gameroom offers a more comfortable, modern space to engage with technology. The students in the DLC set out to design a room equipped for gaming-centered experiences. It has newly installed wood tile floors and dark blue walls.

“There are a lot of video game labs around, but this room isn’t necessarily modeled on those,” Hall says. “I wanted this to be more of a teaching space. Classes are supposed to be taught in there around games.”

But the lack of a model for the lab proved a challenge.

“There’s been a lot of really amazing game labs that we toured. People at Duke and at N.C. State were very generous with their time and showed us how they set things up,” Rivard says. “But we were trying to envision a small class where games could be played in many different ways, and there was really no other place that we saw doing something like it.”

The room, which can fit about 25 students, features multiple gaming areas and surfaces for board games which, Rivard admits, are her favorite.

While Greenlaw 316 was undergoing its transformation, Hall began consulting with instructors to create courses for the space. One of these meetings was with Rodríguez-Romaguera.

The new curriculum Rodríguez-Romaguera and Hall mapped out helps students to explore themes of horror more in-depth than was previously possible. The interactivity in a first-person game like “Layers of Fear,” for example, allows students to analyze the impact of point-of-view on audience experiences. The game’s unique storytelling and placement of the player as the role of both author and character leads to class discussions on empathy, violence, representation, and morality within the horror genre. 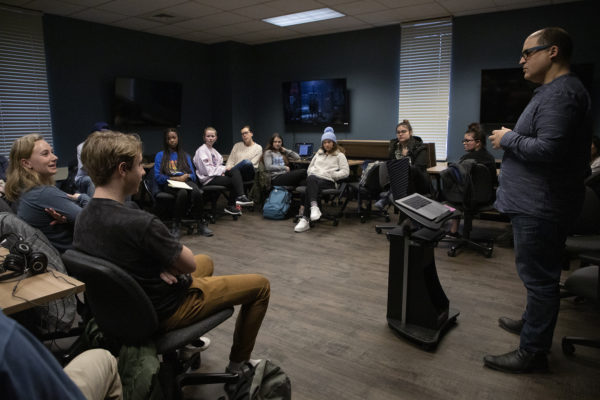 Students participate in a group discussion after playing “Layers of Fear” in Guillermo Rodríguez-Romaguera’s class. Photo by Megan May.

The game also scares the living daylights out of Rodríguez-Romaguera’s students and makes for a very engaged class.

“Some people get too scared and don’t want to investigate the game’s environment as much. They get an entirely different experience from students who open every door,” Rodríguez-Romaguera says.

His students start class in groups with a period of gameplay. Each group plays with a different thematic idea or prompts in mind, like elements of suspense. While one member plays, their classmates take notes on their topic for class discussion. When the class regroups, students compare and analyze their experiences and findings. Their perspectives vary widely based on how their group played.

“It’s interesting how the collective fear of the group plays into what their experience of the game becomes,” Rodríguez-Romaguera says.

This enhanced interactivity and communication among students was the most surprising aspect of the new course, Rodríguez-Romaguera says. He was struck by how video games allowed students to have active discussions and engage in analysis as they collaboratively worked with the course material — something impossible during a movie screening or out-of-class reading. He witnessed his students become more active learners and saw improvement in their understanding of theory and their ability to identify theory in mediums beyond video games.

Hall is teaching his own gaming course as well. Last fall, he piloted an English 105 class called “Gaming Across the Disciplines.” It follows the same curriculum all 105 classes do — teaching first-year students how to read, write, and analyze papers in the areas of science, business, and the humanities — but incorporates video games to teach those skills.

For the natural science unit, his students chose different video game software and brought in participants to survey its usability. With the data they collected, his students submitted a user experience report. For the business writing unit, they developed a pitch from the perspective of a game developer.

“It went really well,” Hall says. “My students were engaged and excited to come to class.”

A 2012 essay on game-based learning in the journal Frontiers in Psychology argued that games sustain student attention throughout class, and their design is full of effective teaching structures and transferable skills.

“Even though the students didn’t have any experience with games, I had people come to me in office hours and thank me for introducing them to things that they wouldn’t have otherwise experienced,” Hall says.

Hall intentionally did not advertise his session as a video game-focused version of the course in order to attract students with different levels of gaming experience. From its inception, he wanted the gameroom to combat the stigmas and roadblocks that bar many people from enjoying video games. While this is primarily an economic barrier due to high equipment costs, Hall says, a lot of people simply lack the foundational experience needed to engage with complicated, popular games.

The impact of the gameroom goes beyond the walls of Greenlaw. Suzanne Lye’s first-year classics seminar, “Ancient Magic and Religion,” will make use of the room in their exploration of ancient worlds through “Assassin’s Creed” games, which include an educational mode where players can explore highly researched and realistic landscapes of ancient cities.

Moving forward, Rodríguez-Romaguera wants the game room to become even more immersive and would like to see the space equipped with VR technology.

In addition to getting a steady source of funding and acquiring more consoles, Hall aims to expand the gaming initiative beyond Greenlaw 316 — both to other universities and to Triangle-based game development groups like Epic Games, the producers of the popular game “Fortnite.”

“I think, too often, gaming culture creates exclusive spaces where a lot of people feel like they can’t belong, even though they enjoy games,” Rivard says. “We want to create a place of inclusion and equity, a space where everybody belongs.”

Guillermo Rodríguez-Romaguera is a teaching assistant professor in the Department of English and Comparative Literature within the UNC College of Arts & Sciences.

David Hall is a second-year PhD student in the Department of English and Comparative Literature within the UNC College of Arts & Sciences.

Courtney Rivard is a teaching assistant professor in the in the Department of English and Comparative Literature and director of the Digital Literacy and Communications Lab within the UNC College of Arts & Sciences.

The Greenlaw Gameroom was made possible by a $30,000 Lenovo and Center for Faculty Excellence Grant, with support from Department of English and Comparative Literature Chair Mary Floyd-Wilson.