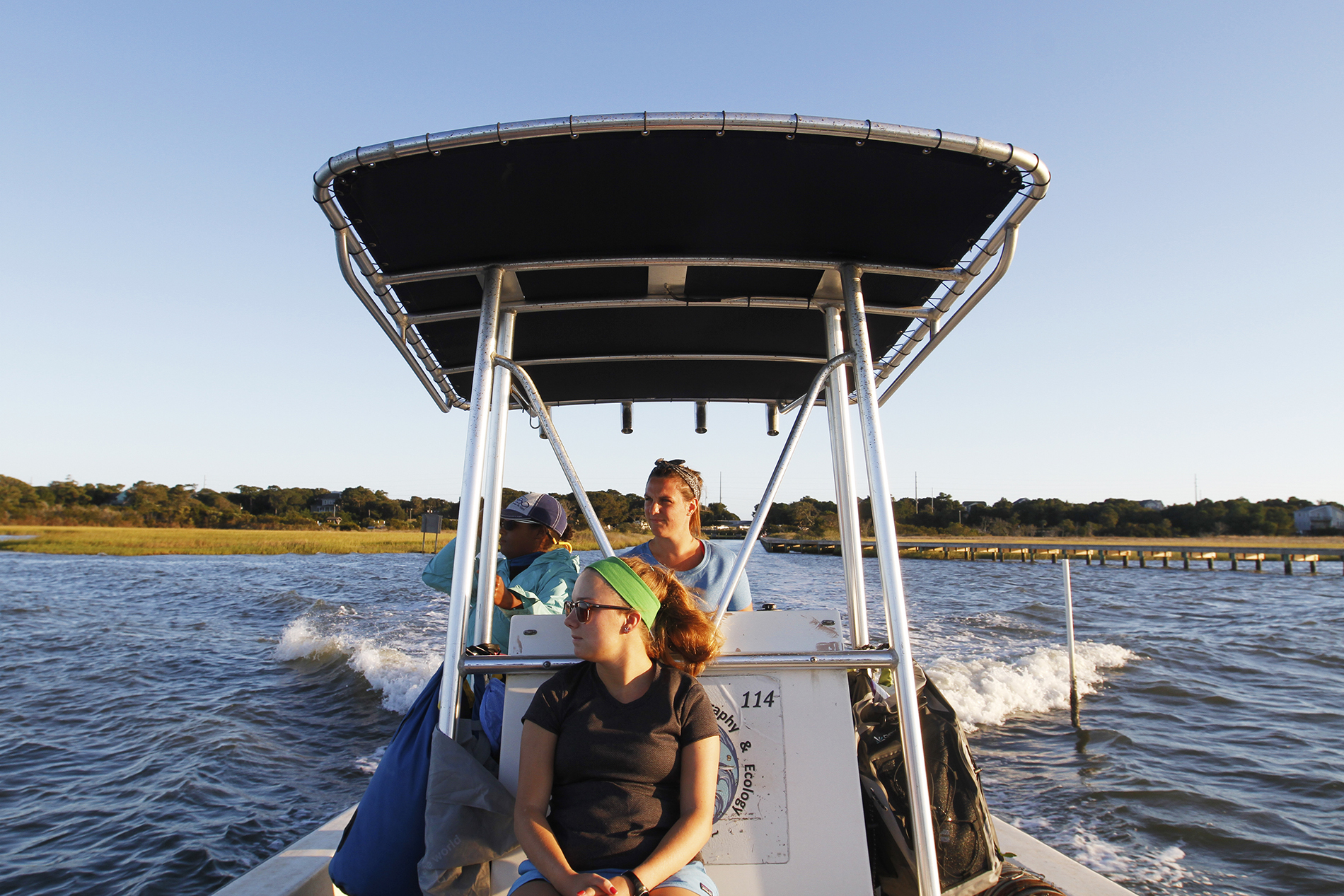 “As marshes become more eroded away, we want to preserve the ones that are providing the best habitat for juvenile fish,” Shelby Ziegler says.

On a brisk evening in early October, the UNC PhD student and her team set out for a long night of field work in the marshes around Emerald Isle. Over the course of several hours, they’ll visit four different sites to set nets and traps to catch fish. Ziegler will then take those fish back to her lab to gather data on how each marsh ecosystem influences local fish populations. As an undergraduate, Ziegler conducted field work that allowed her to establish a connection between the environment and the local community. She chose to pursue her PhD at UNC because she knew she’d be able to do similar projects here.

“The fish ecology lab at UNC Institute of Marine Sciences has amazing study sites right outside its back door and has a history of conducting interesting landscape-scale experiments,” Ziegler says. “At UNC, I’ve had the opportunity to do exciting large-scale fieldwork that could be applied to protect both the environment and economy in my own community.” 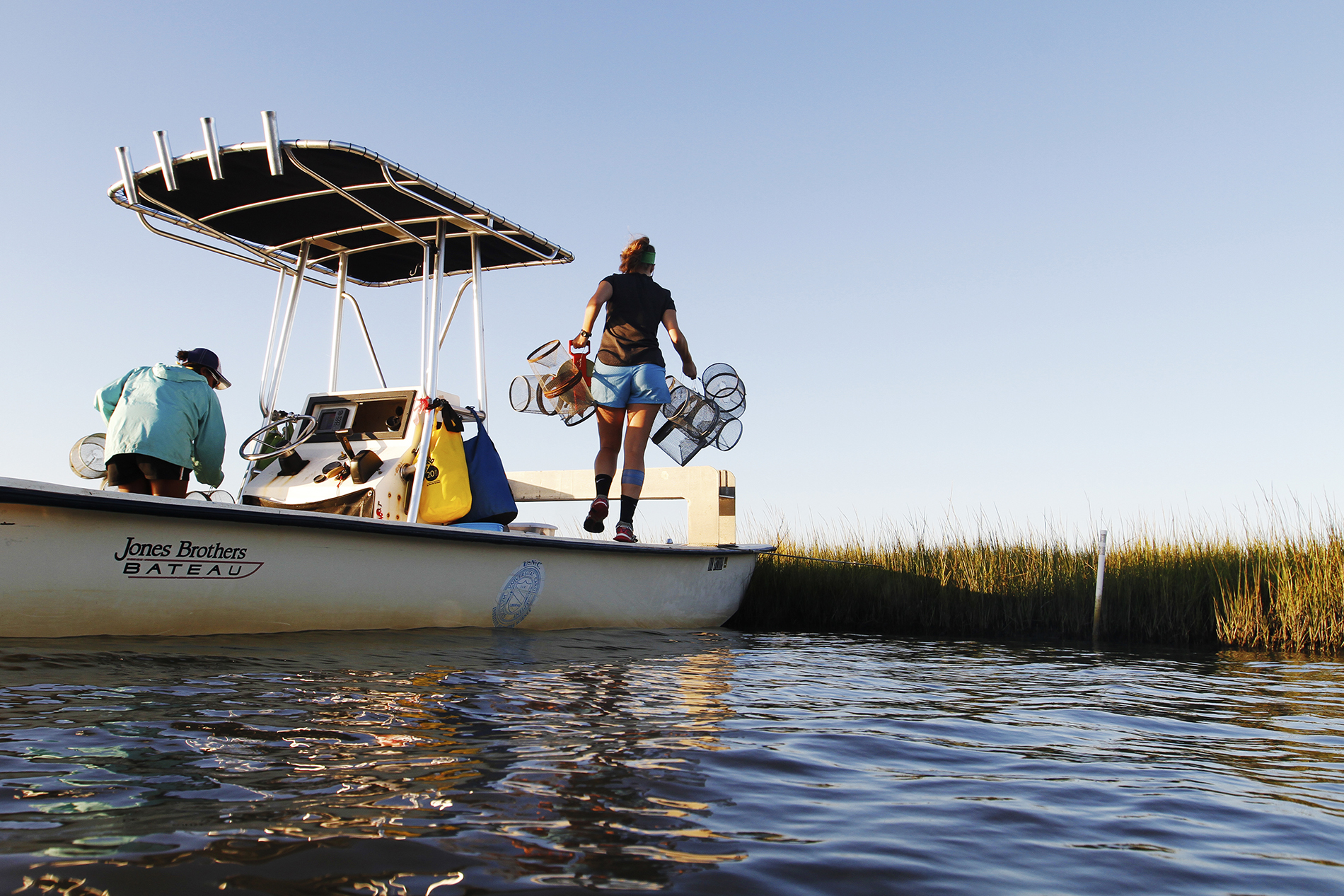 “Marshes are known to be important habitats for recreationally important crustaceans and fishes, but not all marshes are created equal,” Ziegler says. “Everyone groups them together as one habitat.” She wants to find out how different marshes serve the animals residing there. To do this, she has established 18 research sites including three large mainland marshes, as well as small marsh islands.

Here, Lauren Clance prepares to set out the minnow traps at the first site. 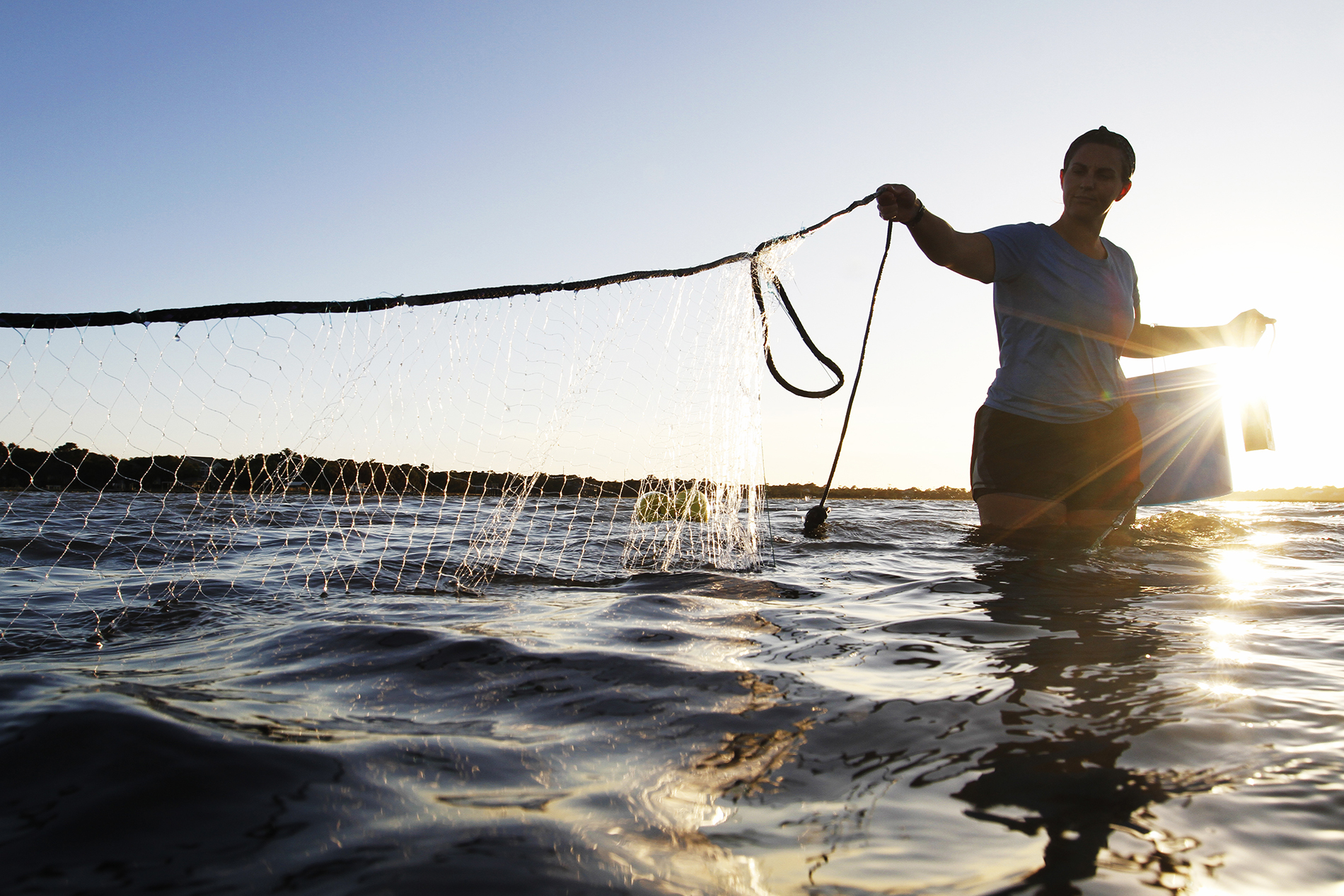 Ziegler utilizes a variety of equipment to catch fish. Here, she sets an experiment gill net as the tide comes in and the sun starts to lower. 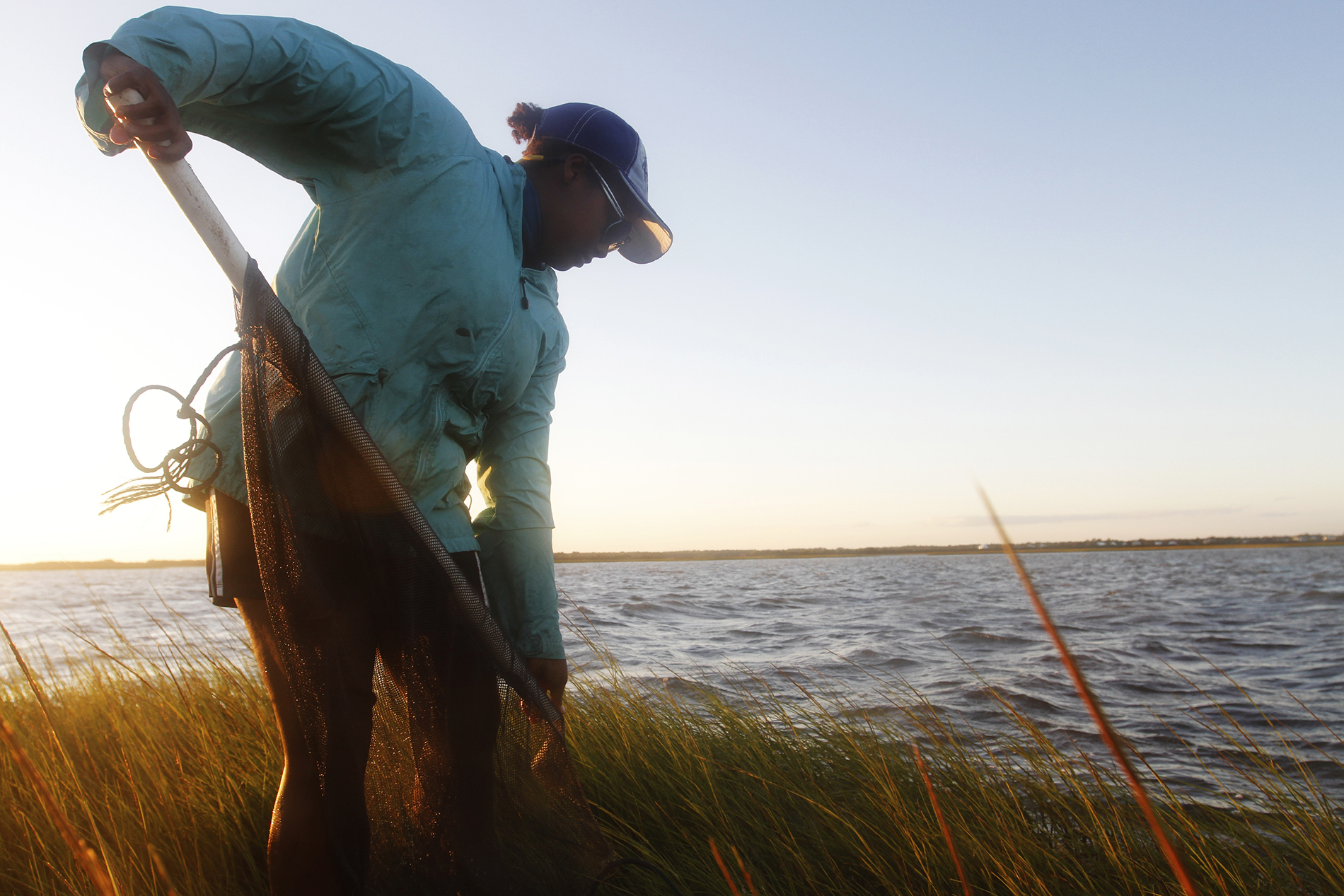 Francesca Peay, one of Ziegler’s field assistants, untangles a net at the first site. 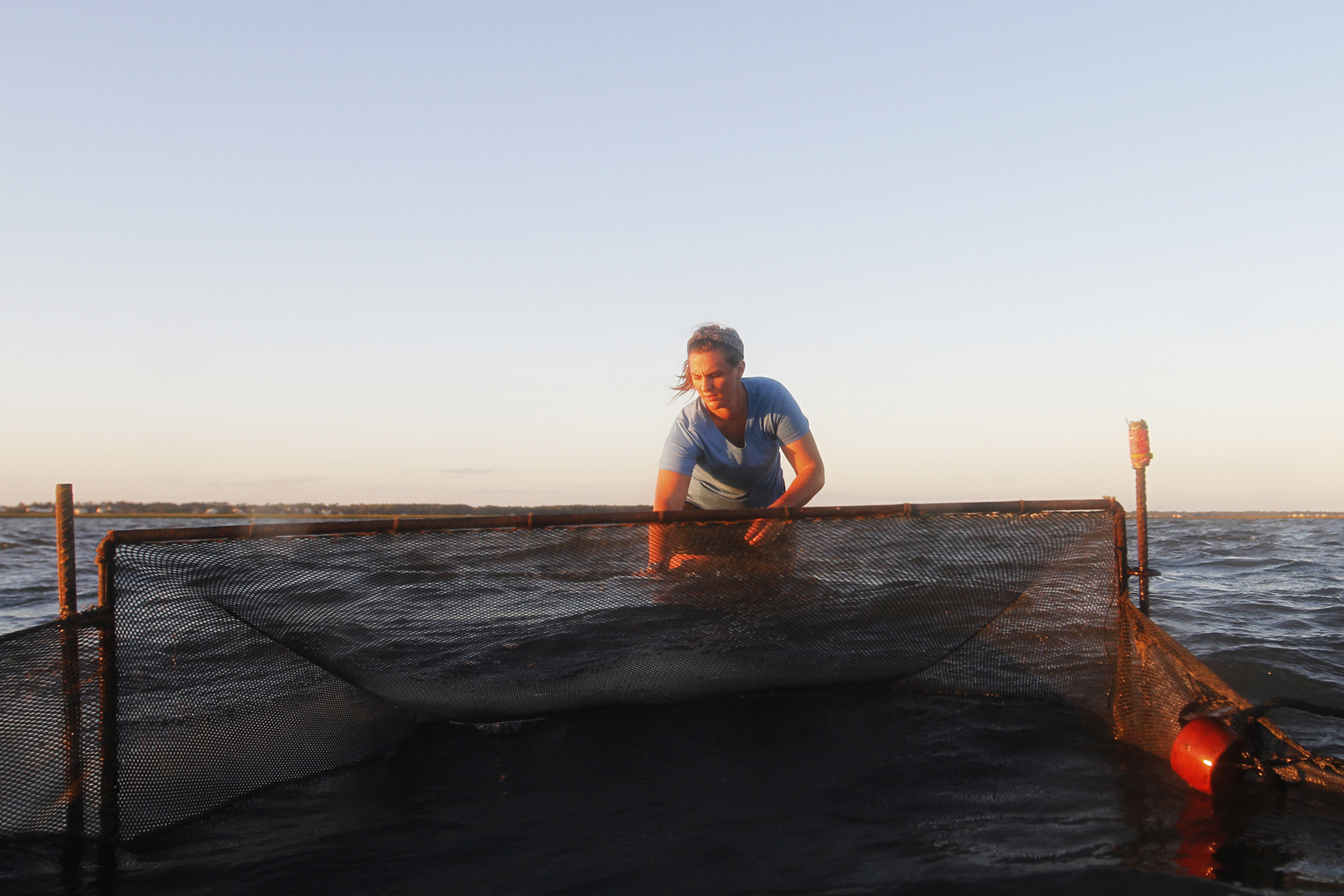 Ziegler sets a fyke net, which includes two large wings that funnel everything coming off the marsh in a given area. Ziegler and her team drive rebar stakes into the mud to ensure the fish stay underwater. “That way, everything we capture is still alive.” 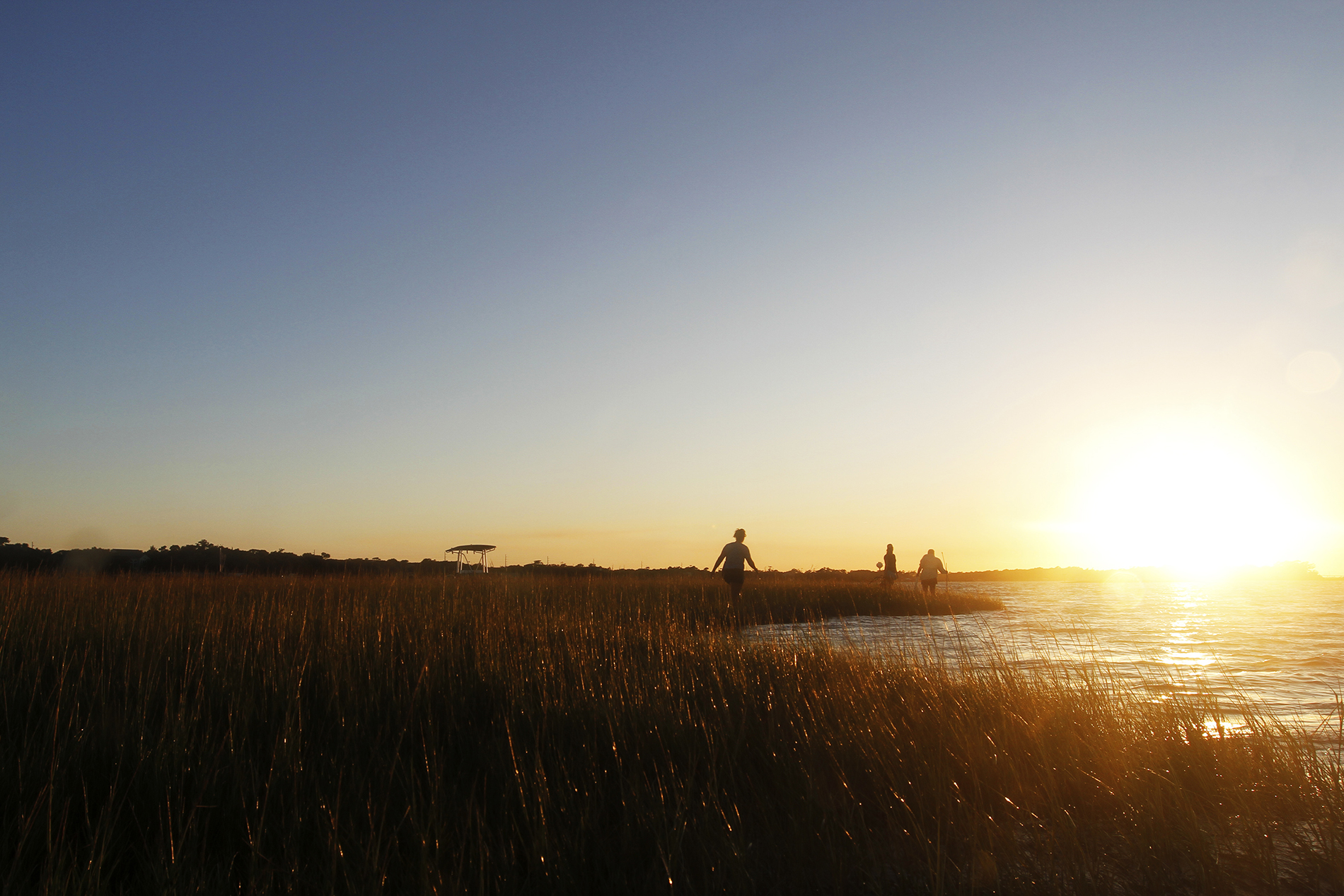 The sun sets as Ziegler and her team head to their next site.

In the chaos of the underwater world, marshes create structure — grasses and oyster reefs provide places where small fish can hide and feed on the detritus and tiny crustaceans.

“We do find big fish swimming in marshes as well,” Ziegler says. “It’s a vital habitat for all kinds of fish really.” 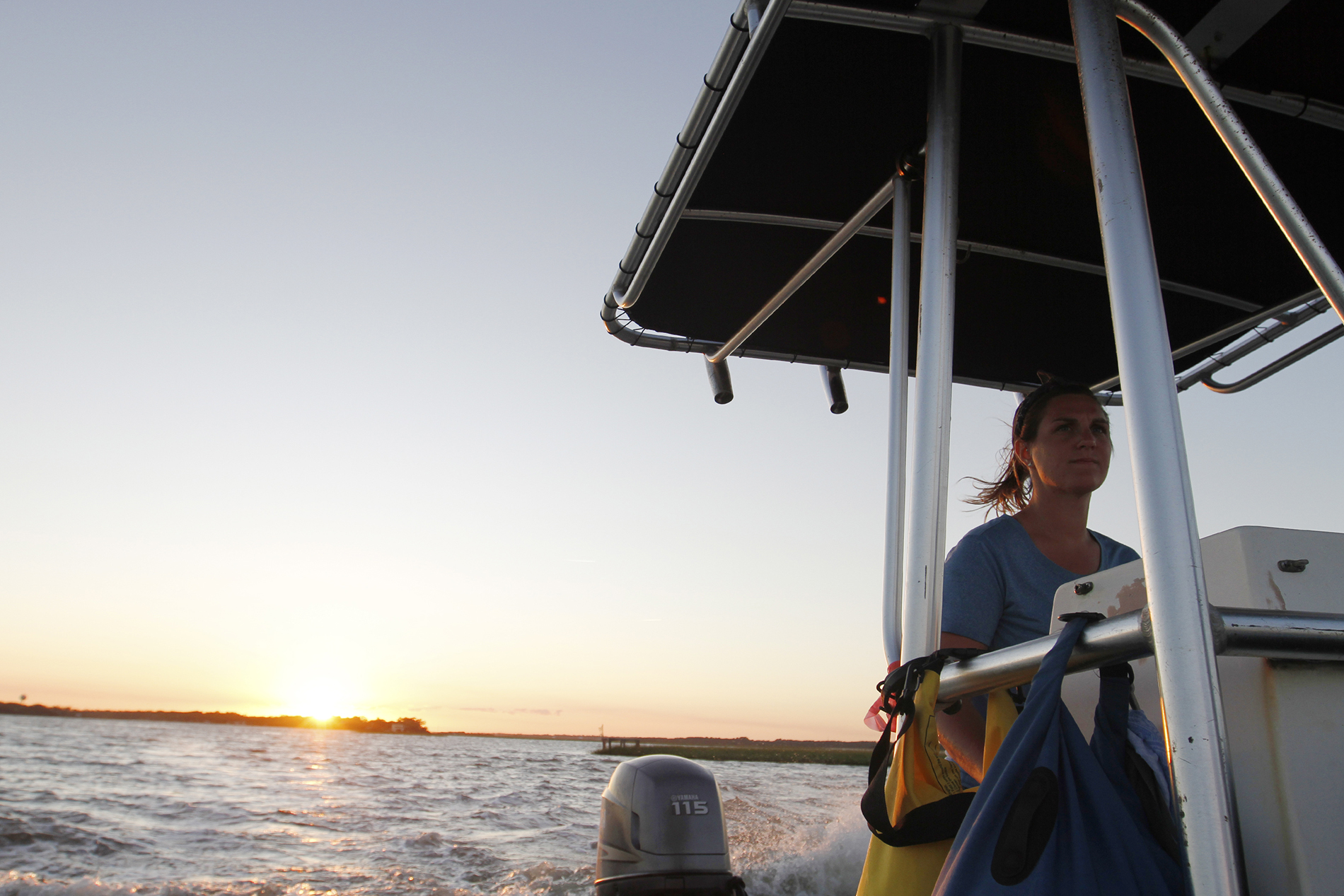 “Fish feed a lot more at night,” Ziegler says. “If we were doing this during the day, we would catch some fish, but we wouldn’t get the fish that are feeding or foraging.”

In the summer of 2017, Ziegler and her research technicians completed 24 nights of field work and collected 1,152 samples. Each night of work included setting up all the equipment, waiting for the tide to recede, and then collecting all the gear and fish afterwards — a process that typically took 10 to 12 hours. 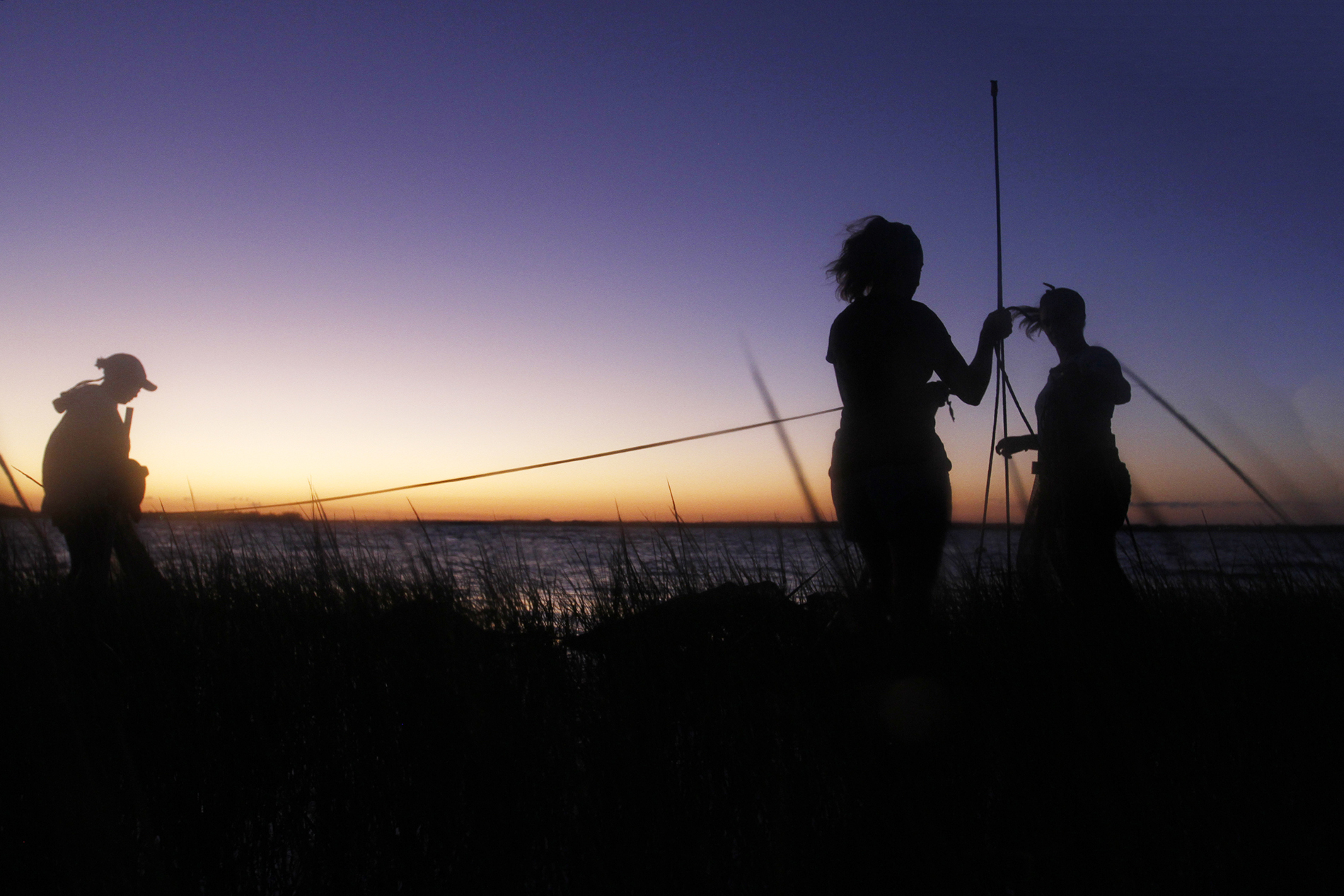 “When it gets cold overnight, and you’re wet, and you’re waiting for the nets to soak for hours — you have to keep a good attitude and be positive,” Ziegler says. She and Clance would often pass the time and keep their spirits up by singing songs, eating snacks, and reading books by head lamp.

“It’s definitely tough and by the end of the summer we were ready for it to be done,” Ziegler says. “But it’s worth it — we get much better information about what types of fish are out there by doing the work at night.” 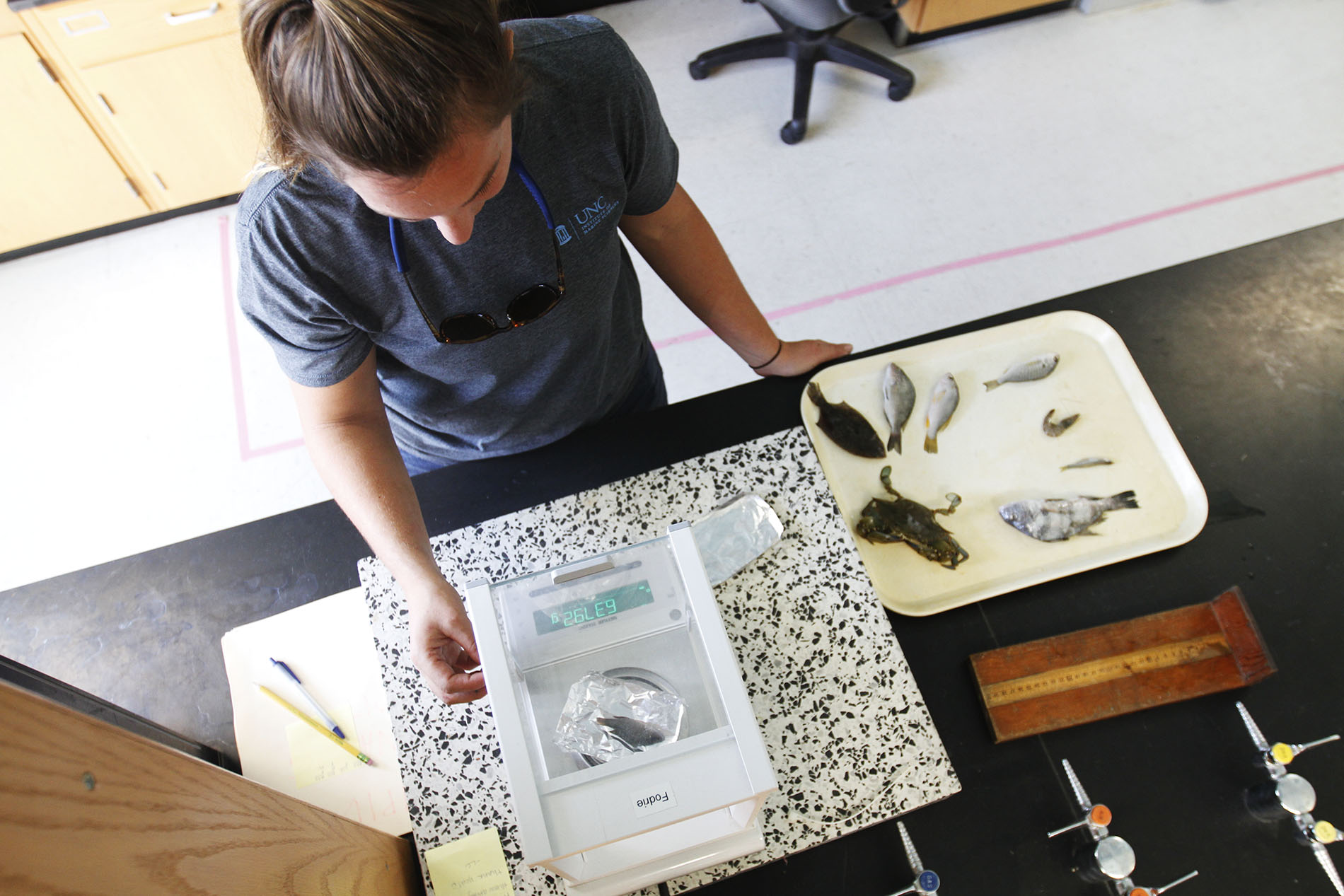 When she returns from the marsh, Ziegler processes all the fish in her lab — counting them and separating them by species. She measures each one for size, and then weighs all the fish within one species to calculate biomass.

Ziegler is interested in every aspect of the fish from her research sites. “We’re looking at the function of the fish — not just the types of fish but what trophic guild they’re in, what predators are there to eat the little fish, and the amount of energy they’re gaining from the marsh.”

After successfully collecting 7,200 fish and crustaceans across 76 species last year, Ziegler and her team will continue this research this coming summer to compare differences across years.

Shelby Ziegler is a PhD student in the Curriculum for the Environment and Ecology within the UNC College of Arts & Sciences.

Lauren Clance is a research technician at the UNC Institute of Marine Sciences and a UNC alumna.

Francesca Peay is a research technician at the UNC Institute of Marine Sciences and a UNC alumna.