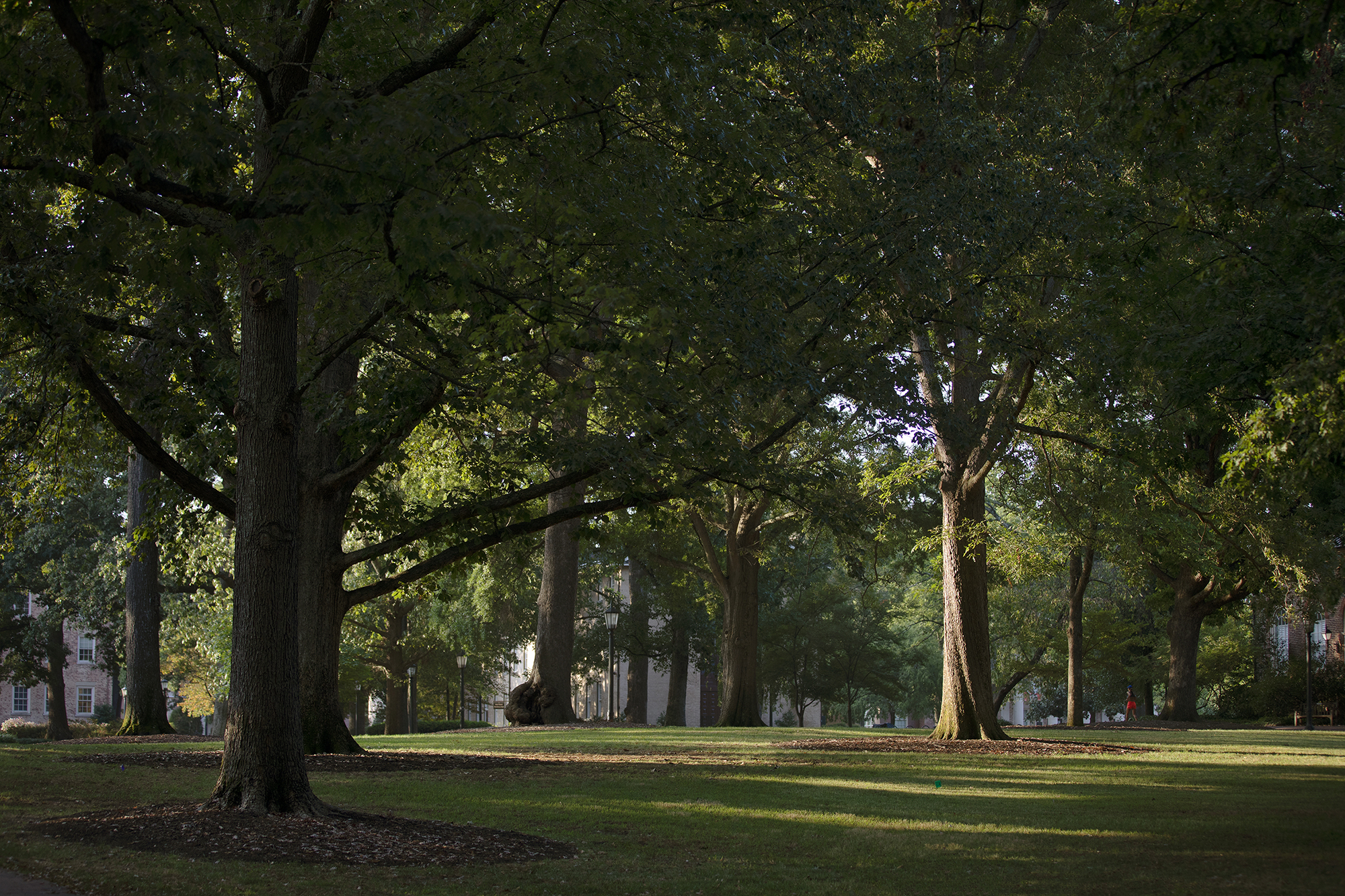 photo by Megan May
McCorkle Place is packed with centuries-old trees, which welcome the public as they enter UNC's campus from Franklin Street.
By Kasha Ely
Earth

Taking root around 1780, perhaps thanks to a colonial ancestor of today’s campus squirrels, a mighty tree predated UNC by a decade or more. For approximately 240 years it stood sentinel, its branches climbing slowly upward as the world around it transformed.

The tree grew steadily, digging in roots as buildings rose up all around and brick pathways spread out in every direction. Each student in Carolina’s history had the chance to seek shade beneath its foliage as they made their way across McCorkle Place. It grew to be the largest tree by volume on campus and eventually gained national recognition as the largest post oak in the state.

But in October 2018, after some particularly wet weather, it died.

Fungus attacked its roots — a common ailment of oak trees. In a matter of days, university arborist Thomas Bythell knew it had to come down.

“When you have a bad year, like a wet year, the fungus in the soil builds up. And when the conditions are just right, all of a sudden two or three oaks that seem perfectly healthy drop dead,” Bythell says. “And there’s really no way to stop it.

“I love all my children equally, but I was really enamored with that post oak,” he adds. 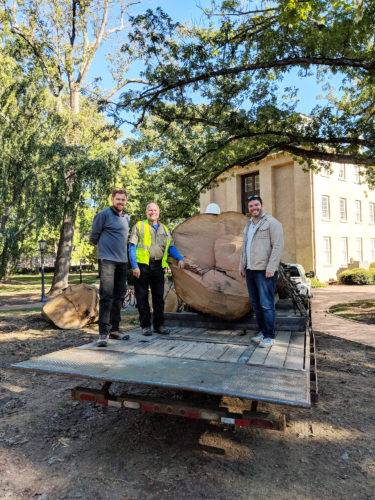 In these situations, safety is always the university’s first priority. A dead tree coming down in an unsafe way could have disastrous consequences. Due to the urgency of the situation, felling and disposal is typically done as quickly as possible. At UNC, a fast tree-felling is often followed by a short ride to Carolina North for mulching.

Knowing the history and value of the post oak, though, a small team comprised of Bythell, graduate student Michael Everhart, and Odum Institute Director Todd Bendor worked quickly to claim it as the very first in the Carolina TreeCycle program. While the legacy of the tree might be priceless, the lumber they saved is worth tens of thousands of dollars due to the size of the slabs, which doesn’t account for the provenance associated with it.

But according to the treecyclers, that’s not nearly the most valuable part of the project.

Treecycling is a burgeoning movement focused on reusing wood from urban, significant, and historic trees in sustainable ways. Large trees in urban areas across the country are often removed and discarded, creating an excess of what members of the movement call “waste wood.” In Charlotte alone, Treecycle America estimates 9 million pounds of usable lumber is burned, mulched, or left to rot in landfills every single year.

As the university arborist of more than 20 years, Bythell was interested in the concept of treecycling for a long time. The university grounds department recycles and reuses nearly 100 percent of yard waste on campus including fallen leaves, branches, and small trees. But trees larger than 35 inches in diameter can’t be processed on-site.

Treecycling would fix that while providing the university with useable, sustainable resources for on-campus projects and fundraising.

“Every time we lose a big tree, I get tons of calls — What are you gonna do with the wood? And there’s an interest in it. Only problem is it’s not as easy as it sounds. You can’t just throw the wood in a corner and wait until it dries and then do something with it,” Bythell says.

Harvesting usable lumber from a felled tree takes time, space, and money. Ideally, the tree is first felled correctly in order to preserve as much wood as possible, then dried in appropriate conditions for months or even years, depending on its size, before it can be milled into workable lumber.

Bythell has not had the time or resources necessary to make a sustainable formalized plan, and while many others mentioned the need for it, no one stepped up to the plate until Michael Everhart came to campus.

For the last year, Everhart, a graduate student in the city and regional planning department, has been discussing the possibility of a plan for campus trees with BenDor, his advisor, and Bythell.

As a former woodworker, Everhart recognizes the losses UNC suffers every time one of those trees goes through the grinder, so he devotes his time to connect the many moving parts needed to honor the leftover wood.

“Specimen” trees are identified by size, age, and overall rarity. But they must be dead or dying before they’re considered for treecycling, so gauging timelines is tricky. Although there was no finalized plan in place yet, the post oak forced the team to take the plunge with treecycling slightly earlier than expected. 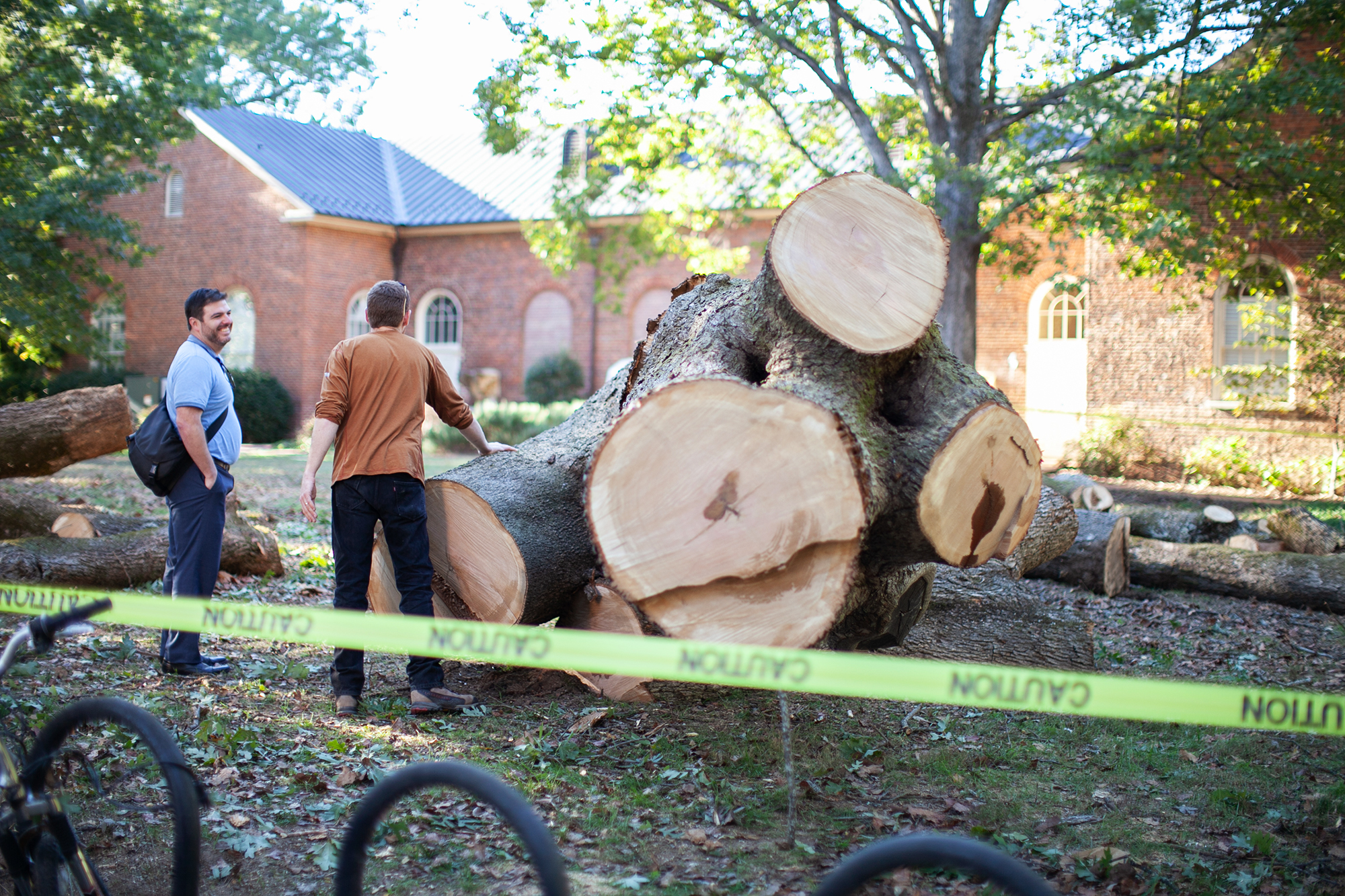 BenDor and Everhart inspect the post oak after its removal from McCorckle Place. “Post oaks are small, and they’re made into posts, and they usually don’t live 250 years,” BenDor says. “So you’ve got a 250-year-old post oak that’s almost 60 inches in diameter and actually was the largest by volume, pound volume, on campus — yeah that’s a really special tree.” (photo by Kasha Ely)

What makes Carolina TreeCycle unique from other similar programs is its ability to provide lifecycle care to the trees it targets. In Everhart’s plans, which he produced as part of his thesis, notable UNC trees are monitored as normal by the arborist, removed to local mills once their times come and returned after they have been milled and dried. The lumber produced will be as unique as the trees it came from and will be used in a variety of ways, but much of it will go to BeAM@Carolina makerspaces.

BeAM began as the brainchild of a small group of faculty and staff who believed there was a need for spaces on campus where students and the rest of the campus community could learn important skills they considered to be lost arts — metalworking, sewing, cooking, and woodworking. As a machinist by trade, BeAM technical supervisor DJ Fedor recognizes other benefits as well.

“Generally speaking, the trades are misunderstood or there is a lack of knowledge about them — and I think BeAM helps shed light on that,” he says. “The trades are skills, and tradespeople are very skilled and intuitive in different areas than typical college curriculum. Those skills, combined with students’ own knowledge and willingness to learn, is creating an amazing thing here.”

The chance to provide students with not only the materials they need but the opportunity to be a part of the process from start to finish is exponentially more valuable than any tangible items that will emerge from their efforts. Everhart, Bythell, and Fedor have already started training an elite group of BeAM student employees who will make products out of the harvested lumber.

“I wish I videotaped the students when they turned their first pen,” Fedor says. “It was that aha moment on steroids. They couldn’t believe they just made that and, you know, it’s just a piece of wood — and then you put a little polish on it, and their eyes just start shining. I really just made that! It was really cool.”

The Carolina TreeCycle team is currently working with campus administrators to craft an official policy for this process. While the details are still being fine-tuned, the plan is to use the saved wood for items to be sold in student stores, in larger pieces for fundraising by departments and other groups on campus, and for various installations around the campus.

“Imagine having a table that’s made out of a tree that out-dates your university, or that was in a special location,” BenDor says.  “That tree is going to be cut into firewood, made into mulch, or made into beautiful pieces of furniture that will be in your home or office for the rest of your life, and maybe your kids’ lives. If we can use that to raise funds to create scholarships or other really useful purposes on campus, that seems like a win-win for everyone.”

In his time at UNC, Bythell helped one man trick his girlfriend into helping the grounds crew plant a tree to propose underneath it. He provided another with shards of a recently removed maple after the man called him sobbing, because the tree was where he met his wife, proposed to her, and visited with her every year until her death. These stories and thousands more make him sure people will want to take a piece of campus with them.

“People’s connection to the place, and to the trees, and all this — it’s humbling for me. And I say this all the time, there’s still probably 15 to 20 trees out there that predate the campus,” Bythell says. “That means every single student who ever went to UNC somehow experienced some of those trees. The Davie Poplar is a good example of that.”

There is a palpable excitement among this team. They see the formalization of this process as a way to protect the university’s resources long after they’re gone, through education of future generations.

While he knows many people will want to take pieces for themselves, Everhart dreams of reusing all the wood for campus installments. He feels that intrinsic connection to the trees and believes the highest use for those so deeply ingrained in Carolina history is to allow them to remain a part of it.

“I would be happiest if every splinter of this wood somehow stayed on campus in a way that the community can continue to benefit from,” he says. “I think part of what makes them monumental is that, simply by recognizing their stature and their age, it gives people the opportunity to reflect on what it means to be part of a community that has been here for such a long time, and will continue to be here.”

Tom Bythell is the university arborist for UNC.

Michael Everhart is a master’s candidate in the Department of City and Regional Planning within the UNC College of Arts & Sciences and a graduate teaching assistant in the UNC Environment, Ecology, and Energy Program.

Todd BenDor is the director of the Odum Institute for Research in Social Science and a professor in the Department of City and Regional Planning within the UNC College of Arts & Sciences, where he is also the head of the land use and environmental planning specialization in the master’s program.

D.J. Fedor is the technical supervisor for BeAM (Be A Maker).

Kasha Ely is the public communications specialist for the Odum Institute for Research in Social Science.