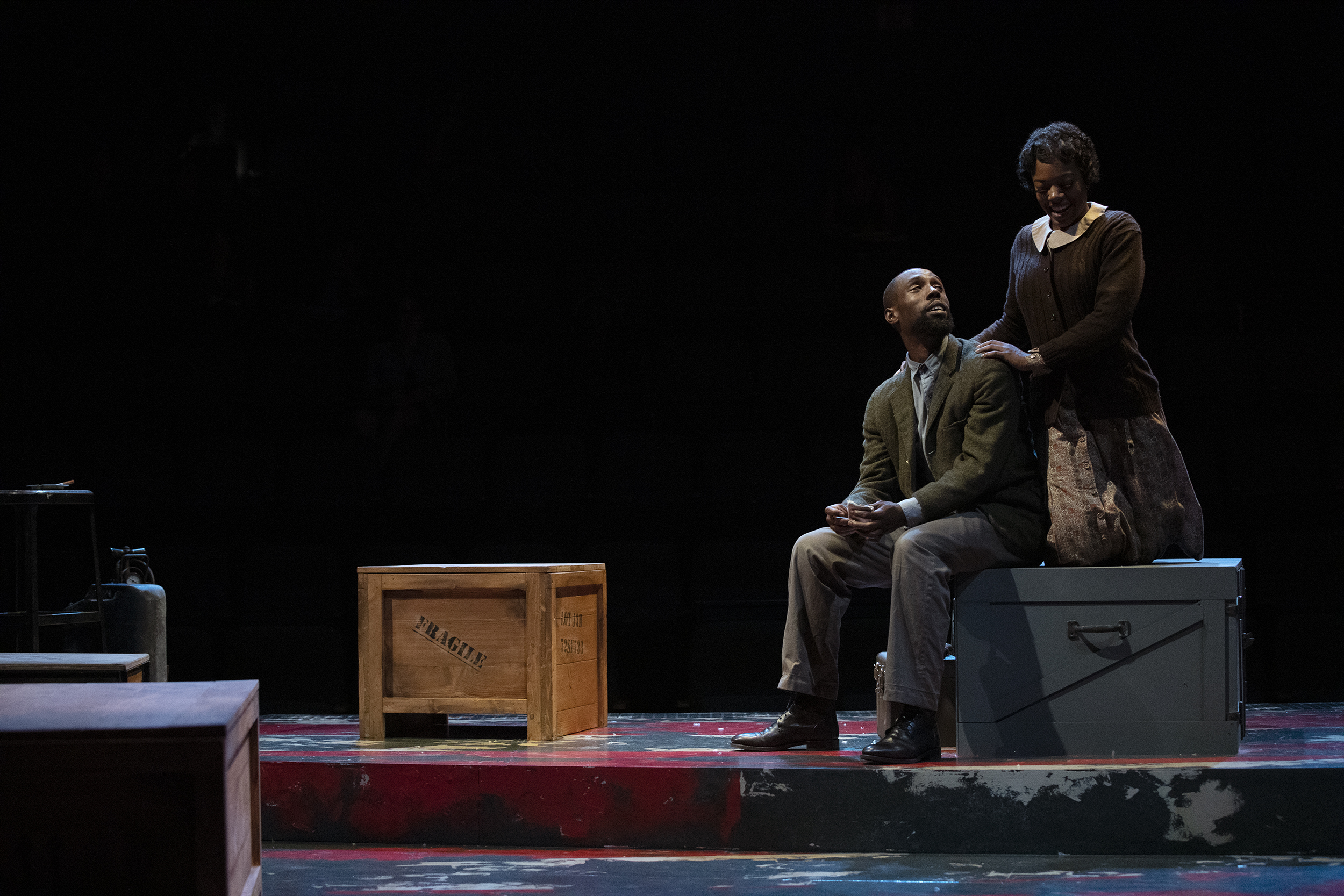 “Native Son,” which premiered at PlayMakers in September, tells the story of Bigger Thomas, a young Black man living in Chicago in the 1930s – amid systemic racism and poverty. (Photo by Megan May)
By Emily Davis
Creativity

“Are you sure this is your room?” Bigger asks. “I suppose it’s Mr. and Mrs. Dalton’s room.”

He opens an imaginary door and struggles to guide Mary through it. He rubs his hip nervously. She laughs at his discomfort.

“Ms. Dalton, I’m going to have to tighten my arms around you,” Bigger says.

As he picks Mary up, she tries to kiss him. Bigger moves his face away from hers as quickly as he can.

“No,” he demands. Mary laughs and falls to the ground. “Stand up,” Bigger asks. He walks behind her and hesitates to touch her. Eventually, he awkwardly grabs Mary’s elbows, helping lift her to her feet.

In September, PlayMakers Repertory Company premiered the first play of its 2019-20 mainstage season, “Native Son,” which follows the story of Bigger Thomas, a Black man trying to survive in 1930s Chicago. After taking on a job as a chauffeur for a wealthy white family, he finds himself trying to help their 20-something daughter, Mary, after she stumbles home drunk one night. While he gets her in bed, Mary’s blind mother, Mrs. Dalton, comes into her room. To stifle Mary’s mumbling, Bigger places a pillow over her face — and when Mrs. Dalton finally leaves, he discovers he’s suffocated her daughter.

How does a modern actor channel this type of persona, one removed by nearly 90 years of time and a slew of cultural stigmas? They must try to understand that character’s world, life, thoughts, and motivations. It’s a feat that requires research, truth, and imagination, according to Julia Gibson, head of UNC’s Professional Actor Training Program.

“The definition of the word acting is the process of doing,” Gibson says. “It’s active. You do it with your body, with yourself. You are the instrument, tool, canvas, whatever you want to call it. It’s the marrying of the self with the character.”

But every role demands a different approach, Gibson says, such as consulting a dialect coach or conducting independent research. In the Professional Actor Training Program, students and instructors work both professionally, as members of PlayMakers, and academically, in classes like Gibson’s to delve deeper into their craft.

How do actors know how to contextualize their characters? Enter the dramaturg — a theater company’s literary editor, tasked with consulting the writers, research, and archives for productions. They tend to wear a lot of hats: analyst, librarian, and community outreach coordinator, to name a few. Adam Versényi, PlayMakers’ resident dramaturg, wears them all.

“A dramaturg, for me, is somebody who has a great deal of knowledge about the history, theory, and practice of the theatre, who is part of a creative team,” Versényi says.

For the play “Native Son,” Versényi studied the history around the original 1940 Richard Wright novel of the same name. The book was adapted for the stage by Wright and Paul Green in the summer of 1941, right here on UNC’s campus.

“They spent the summer working in Bynum Hall writing their adaptation,” Versényi says. “Although the only place that they could find for Wright to live was in Carrboro, in a rooming house in the African American section of town.”

PlayMakers decided to use a new adaptation of the play by author Nambi E. Kelley, which is quite different, Versényi says, but honors the original work. Versényi also studied the Chicago Renaissance, which was in full swing during the play’s 1930s setting.

As dramaturg, Versenyi gives a presentation on the world of the play when rehearsals begin and provides the cast with packets of compiled articles and visual material. For “Native Son,” he included three documentaries the cast could stream through University Libraries.

Versényi has already begun collaborating with the PlayMakers production team on the upcoming production of “Julius Caesar,” for which rehearsals begin in mid-February. From day one, he asks questions like, what’s the rhythm of this play? How is it structured? Are there scenes we want to cut or rearrange? He also brings the history of the play into the current production and digs into critiques of past adaptations — observing what worked, what to avoid, and what to reuse. “Because all good artists steal,” he says.

A dramaturg is always looking for the most effective way to deliver a play to an audience. Versényi wants to find the material that makes the show “as theatrically rich an experience as possible.”

When it comes to researching a character, this kind of analysis by Versényi can aid the actors in accomplishing specificity — an essential part of character adaptation, according to Gibson.

“Why these particular words? What do they mean?” Gibson asks her students. “Why did you do that? Is this the first time you’ve ever said ‘I love you’ to this person, or is it the 80th time? Those are two very different I love yous.”

To practice this, Gibson’s class will review slightly different translations of the same play, showing them how minor deviations have big implications for how the actors approach their characters.

Another goal is authenticity. “We want to be able to expand our truth,” Gibson says. “You want to have a real person who’s fully there, a three-dimensional person who talks in a different accent, has a different ethical belief, or a whole different set of experiences than you do.”

Recently, a student asked how to bring honesty to a character he didn’t relate to. Gibson’s answer? Honest belief. The audience should feel as though they are seeing something happen for the first time ever, she says.

“When little kids play make believe, they’re great actors,” Gibson says. “They start to believe it a little bit, so they can go to these places. And that’s what we have to do. We have to believe in these circumstances — and yet allow ourselves to be present.”

This ties into Gibson’s third tenant: playfulness. While it may sound simple, it can be the hardest for actors to achieve.

For every production, Versényi tirelessly searches for music and visual material that will inspire this playfulness in the cast and crew, to “feed creative juices.” The materials he collects draw both the players and the audience into the world of the play.

“It’s all about figuring out what’s going to be the most effective way of sparking the imagination,” Versényi says.

But how does a dramaturg keep productions feeling fresh? Versényi, who has worked on plays like “Twelfth Night” and “As You Like It” twice as dramaturg, has a positive perspective. “Every single play that you work on, even if it’s one that you’ve done before, is always a totally new experience. You’re constantly learning,” he says.

Versényi finds this one of the most rewarding aspects of his job.

“I’m absolutely dreadful at math and science, and yet I’ve worked on plays, like ‘Proof’ and ‘Copenhagen,’ where you’re learning about math and the history of the nuclear bomb.”

Every project needs solutions, and the dramaturg facilitates those processes. This comes in handy when helping out directors, who have a lot to worry about, Versényi says, from “Is that ashtray the right period?” to “What am I going to do with that actor having a nervous breakdown in the corner?”

“I function as a kind of third eye for the director,” Versényi says. “In the process, it’s very easy to lose sight of what it was that you want to do with the play.”

Dramaturgy is threaded throughout the production process. For Versenyi, it’s hard to point to any particular thing and say, “I did that as dramaturg.” He says the most visible aspect of his work is in what the audience sees. The dramaturg includes program notes in the playbill and hosts the pre-show and post-show discussions. He also is responsible for community engagement, so he often visits book clubs and retirement homes to talk about the current play.

“I am blessed to have a job where I’m constantly learning, because every production is different,” Versényi says. “There’s always something that I haven’t considered or dug deeply into before. And dramaturgs are people who love to do research and go down multiple rabbit holes in the course of preparing a production. So you become kind of a walking encyclopedia of often trivial, and sometimes consequential, information.”

Julia Gibson is the head of the Professional Actor Training Program, a professor in the Department of Dramatic Art, and an actor with PlayMakers Repertory Company.

Adam Versenyi is chair of and professor within the Department of Dramatic Art and dramaturg for PlayMakers Repertory Company.