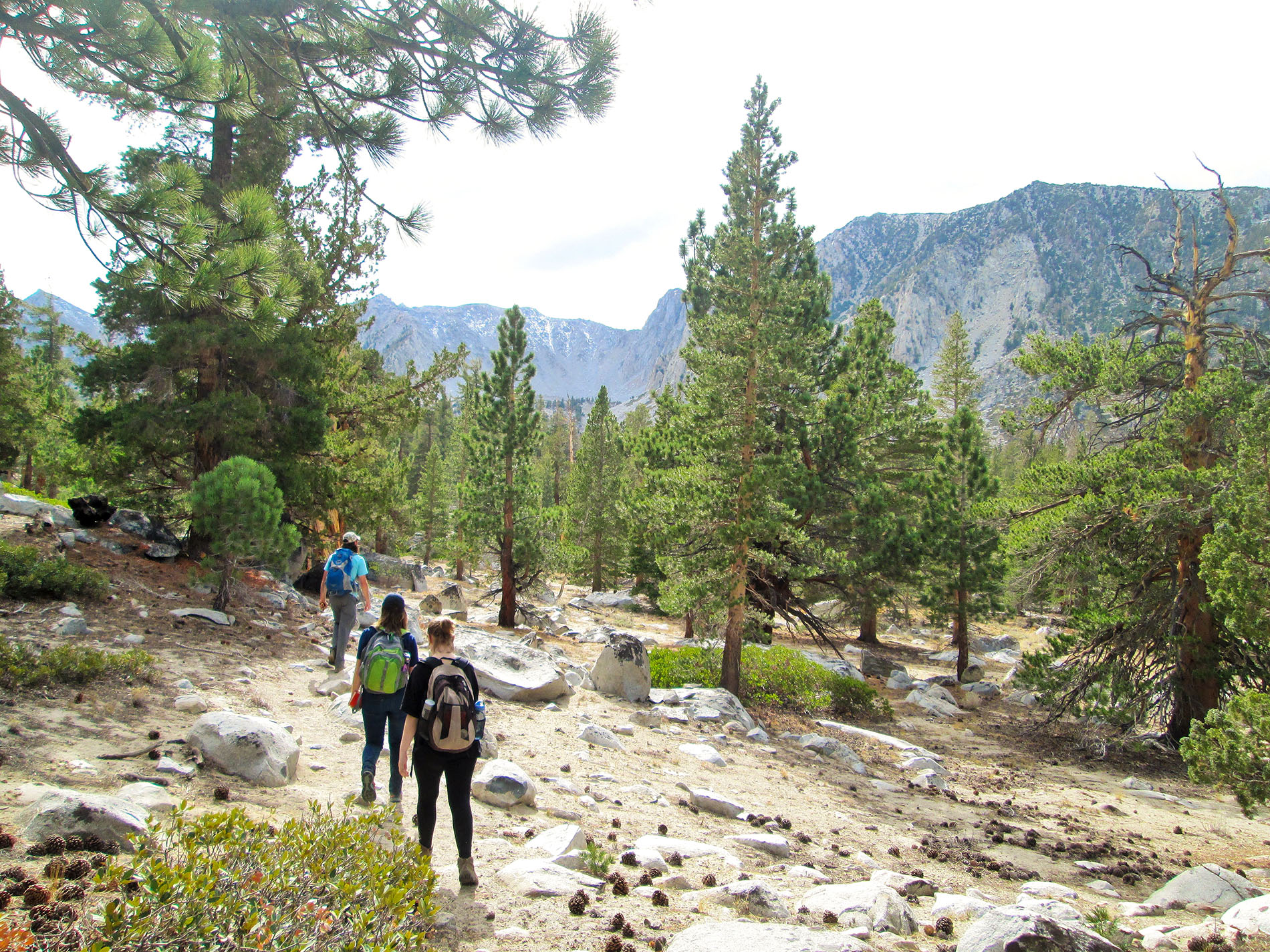 Each October, eastern California shifts gears. Leaves change color, waterfalls diminish to trickles, and the wildlife inhabiting this stunning landscape prepare for winter. UNC geologist Drew Coleman stands near a cliff face in Yosemite National Park, excitedly describing the surrounding topography to a small group of Carolina students. It turns out that the mountains, valleys, and glacier-carved rock features of this region are changing, too, but much, much slower.

Elena Watts listens to Coleman’s talk in awe, taking in the beauty of the Sierra Nevada.

At the time, Watts was a first-year interested in neuroscience, but after spending her 2015 fall break with Coleman’s “Field Geology of Eastern California” class, she decided to become a geologist.

“I’d like to think there’s a little bit of geologist in everybody, and you can’t go to a national park without engaging in geology,” Coleman says. “Everybody’s got this curiosity, and I think what the California trip does is turns it to eleven.”

“Field Geology of Eastern California” is a first-year seminar course taught by Coleman and Allen Glazner, another geology professor at UNC. It engages students in original research projects of their own design, which was the aspect of the trip that hooked Watts — she loved the challenge and process of doing research and gathering data in the field.

“When I came to Carolina, I was a biology and psychology double-major,” she says. “I took the geology first-year seminar on a whim. I just thought it would be fun to go to California, but I really enjoyed it, and realized that there was all this fascinating stuff happening in the geology department.”

When she returned to campus, Watts switched her major to geological sciences and began working in Coleman’s lab the following spring. She has spent the past three years at Carolina studying strontium in the Neuse and Cape Fear rivers. This fall, she is a teaching assistant for that same California field course that inspired her to pursue geology three years ago.

All rivers lead to the ocean

Throughout Earth’s history, major geologic events have transformed the chemistry of the ocean — a phenomenon that geologists study to understand the evolution of the planet’s geological landscape.  They do this by measuring the elements present within seawater, specifically forms of the same element that have different masses, which are called isotopes of the element. The ratios of some isotopes depend on the age and nature of rock, so by measuring them, geologists can construct ideas of how the continents evolved and predict what they might look like in the future.

“For instance, right now, many researchers believe that the isotopic ratio of the oceans is generally rising due to erosion of the Himalayan Mountains,” Watts explains. “The reasoning behind this interpretation comes from understanding what the sources of elements are to the ocean. That’s where riverine inputs come in.”

Riverine input comprises of concentrations of elements in the ocean that depend on contributions from rivers. Those concentrations are largely dependent on the rock through which the river flows. One element called strontium — Sr on the periodic table of elements — is easy to measure, and its isotopic ratios vary greatly in different regions of North Carolina.

“Isotopic ratios are something like a fingerprint for the rocks and soil with which water interacts,” Coleman says. “Strontium ratios vary dramatically with the geology in this part of the world, so it was an easy test to try and see if the strontium tracked the geology as the Cape Fear and Neuse rivers crossed geologic boundaries.” By collecting rocks and river water from different areas of North Carolina and examining their strontium isotopic ratios, Watts could determine if the bedrock and river water ratios matched.

In the geology community, it’s generally accepted that a river’s water reflects the geology of its river basin — that is, the isotopic ratios of elements in the water are similar to those of the dominant bedrock. While Watts found that this was true for the Coastal Plains region of North Carolina, it turns out that the isotopic ratio of the water in the western region of the state was being influenced by much less abundant rock.

Watts thinks that groundwater might be traveling over and dissolving minerals from mafic dikes — ancient veins of magma that cut through the bedrock — before becoming river water. “I hypothesize that the dikes are creating a path through the rock that the water can flow along more easily,” she says. 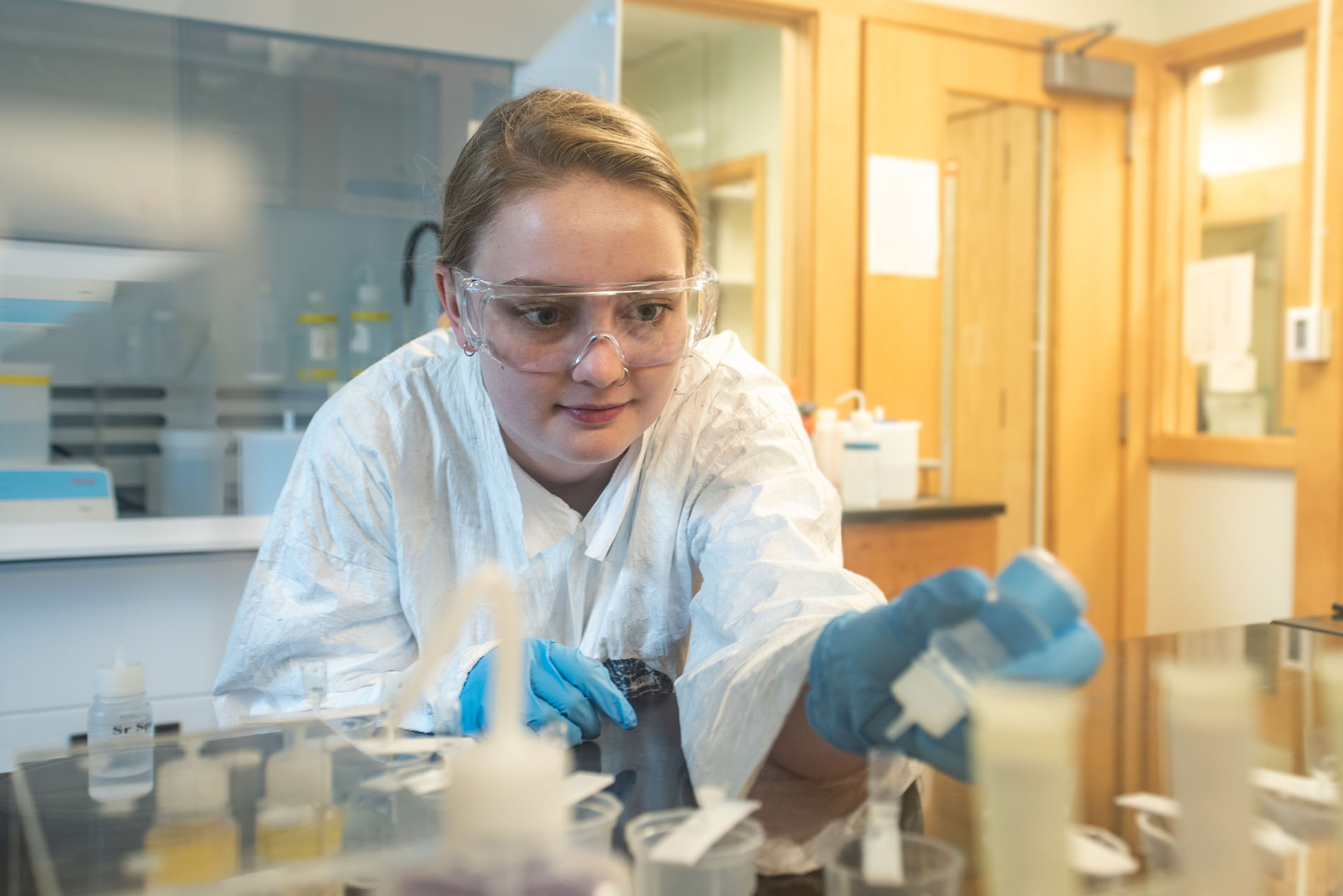 Watts is hoping to publish her results in The Journal of Geophysical Research: Earth Surface, where the scientific paper she wrote is in review. Her work has already served as the basis for a grant proposal that funded both graduate and undergraduate research in Coleman’s lab. As for herself, Watts is busy writing a senior honors thesis and applying for graduate school — all while completing her senior year at Carolina.

Watts has presented her work at the Geological Sciences Student Research Symposium and UNC’s Increasing Diversity and Enhancing Academia (IDEA) program conference. This November, she will present at the Geologic Society of America Conference in Indianapolis, Indiana, to share her work with the geology community, network, and learn about different graduate programs.

Looking forward, she’s discovering new areas of geology that pique her interest. For her senior honors thesis, Watts is examining isotopes in ancient magma from Greenland, as part of a larger project headed by Alan Boudreau at Duke University. With this project, and perhaps for graduate school, she is shifting her focus from rivers to magmatic rocks.

“I’m fascinated by hotspot volcanism,” Watts admits. “Geologists are still trying to understand how or if it’s related to plate tectonics, and I am really interested in that question.” Volcanic hotspots are thought to occur when tectonic plates travel over magma plumes in Earth’s mantle, creating a chain of volcanos over time. The Hawaiian Islands are perhaps the most famous example of this.

“Maybe I’ll even branch into geochronology, which is all about dating rocks,” she continues, adding that in such a diverse field, the possibilities are endless.

Conducting research in UNC’s geology department has transformed Watts’s undergraduate career. “Doing something from start to finish — from developing a hypothesis to trying to get it published — is a really good experience,” she says. “It’s given me the confidence that research is something that I’m both capable of and enjoy.”

For those planning on attending graduate school, getting involved with undergraduate research is incredibly valuable. Most graduate degree programs in the natural sciences are centered around conducting original research. But even for those who aren’t planning on continuing to grad school, the skills learned while participating in research are important. “Those skills are going to be valuable in any profession that you go into after Carolina,” Coleman points out. “So why not immerse yourself in it while you’ve got people invested in teaching you?”

And in the geology department, both Coleman and Watts agree that the people are invested. For students, research opportunities are there for the taking.

“I think the faculty in this department are really motivated,” Watts says. “Everyone is interested in engaging with undergraduates and helping them conduct original research.”

Coleman agrees: “If you’re an undergraduate in this major, you’re missing a great opportunity if you don’t engage in research — because it’s there!”

Elena Watts is a senior majoring in geological sciences within the UNC College of Arts & Sciences, and a student assistant in UNC’s Geochronology and Isotope Geochemistry Lab. She received funding for her research through the Increasing Diversity and Enhancing Academia (IDEA) program and the Walter Wheeler Fund.

Drew Coleman is professor and chair of the Department of Geological Sciences within the UNC College of Arts & Sciences.