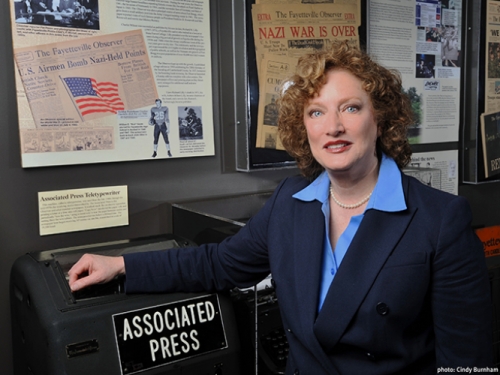 Wayne Horne was 14 years old when he started reading his local newspaper, the Whiteville News Reporter. “My parents got it, so it was always around the house,” he says. “The older I got, the more I read it.”

That was 68 years ago. Horne still lives in Whiteville, North Carolina, with his wife, and they still read each edition of the paper—in print. “I don’t mess with the computer any,” Horne says. “We get the paper delivered. When the paper man comes by, I go to the door and pick it up, and sit down with a cup of coffee to read it.”

Franklin Davis, a teacher in Whiteville, reads the print edition of the News Reporter regularly as well. He gets the paper delivered and reads it cover-to-cover, and between the twice-weekly editions, he reads updates online. “It’s saved in my favorites on my web browser,” he says. “I go online for the sports stories, and I check the Twitter feed for the score updates.”

Both Horne and Davis appreciate the paper’s focus on their community. “Some people in this area get the Wilmington paper or the Fayetteville paper, but we’re just far enough away from both of those places that there’s not a lot of information that pertains to us on a routine basis,” Davis says. “The News Reporter fills that void really well.”

“Throughout the history of the newspaper, we’ve been a voice for this rural area,” says Les High, managing editor at the News Reporter. But in many towns like Whiteville, that voice is in danger of going silent. As high-speed internet and mobile devices become more and more commonplace, small-town print newspapers are struggling. To survive, they must reinvent their print-based businesses, and they have to do so with very limited resources.

Faculty and students at the UNC School of Journalism and Mass Communication wanted to help. In 2009, Penny Abernathy, a distinguished professor at the school, started applying for grants and outlining a bold initiative to help community newspapers find the best ways to reconfigure their product for the digital age. Over the past five years, Abernathy, along with her colleagues and students, has brought the expertise and resources of UNC’s journalism school into the offices of small-town newspapers.

“Having grown up in the rural South, and having gotten my start at my hometown paper, I realize it’s really important for our community newspapers to survive,” Abernathy says. “In many rural areas, a newspaper is the prime—if not the only—credible and comprehensive source of local news and information.”

So she started the project in rural North Carolina. One of the first editors she called was Les High at the Whiteville News Reporter.

Right around the time Abernathy called Les, he was asking himself some hard questions about his newspaper. The recession of 2008, coupled with the arrival of high-speed internet in a rural part of the state, had created a perfect financial storm for the Whiteville News Reporter.

Local mom-and-pop shops stopped running regular ads in the paper—not because they were low on funds, but because they went out of business completely. In addition to the loss of advertising dollars, many readers cancelled their subscriptions. “Unemployment got up to 15 percent at one point—the highest in the state,” Les says. “So people had to cut their budgets, and newspaper subscriptions were one of the things they cut.”

He knew he had no choice—he would have to make some major changes to keep the newspaper alive. But how? What should he change, and what should he try to maintain?

Abernathy, a former executive with the Wall Street Journal and the New York Times, had a plan —bring UNC journalism students to Whiteville, where they would conduct surveys of readers and advertisers, and create a roadmap to increase the paper’s revenue and readership. Les agreed to Abernathy’s proposal.

For the first class of students, the project was a daunting assignment. “It was easy to look at this and think, ‘Where do we even start?’” says Jed Williams, one of Abernathy’s former students, who now works in newspaper consulting. “We had to look down the road to the pot of gold at the end of the rainbow, which was showing the newspapers new ways forward, both with content for their readers, and advertising products for their ad-revenue base. But how do you get there? That’s a daunting task when you’re starting at zero.”

Williams said the students also had to be aware of the differences they would encounter in a small town like Whiteville. “The way media has been transforming in major markets, like Raleigh or DC or New York, over the last 10 or 15 years—that disruption is going to touch every city, big or small,” Williams says. “But the disruption occurs at a different pace in different markets. So taking our understanding of changing media habits in a metro market and just plugging that into a place like Whiteville—that would be a faulty notion. We had to be really open-minded about the unique challenges in each of the communities we went into.”

In the first two semesters, students conducted market research. The next group of students recommended strategies based on the research, and finally students worked side-by-side with the paper to help make changes. Each semester a new group of students picked up where the previous semester’s class left off.

During that first year, Abernathy and her students conducted surveys with readers of the News Reporter—and the results were surprising. “Penny said our print readers were as loyal as those of the Wall Street Journal. A term she used was, ‘off the charts,’” Les says. That reassured Les that people would continue to read the print edition even if the newspaper’s website, Whiteville.com, published the same content. And building up the website would allow the paper to extend its digital base, especially to younger readers.

“We realized how fast habits were changing, and we also realized there was a lot more flexibility with the print readers,” Abernathy says. “Everybody was so worried about antagonizing the loyal print readers with the online presence, but they really weren’t bothered by it. It was the routine of reading the print newspaper they were loyal to. This was good news, because the newspaper could go about reinventing itself as a digital and mobile medium while preserving its print customers.”

Knowing how much readers valued the paper’s focus on their community, Abernathy and her students worked with the News Reporter to create digital community pages and special-interest sections. They also developed new advertising approaches to boost digital sales. The students conducted training sessions with the paper’s staff. They came up with target lists of advertisers and individually tailored sales kits for each one.

Les and the other editors at the paper were impressed. “The students were so enthusiastic,” says Stuart High, the special projects manager. “All of the technology we were trying to embrace was just so innate and secondhand to them. The fact that they’re all so digitally inclined showed us that if we didn’t embrace it, we were going to get left behind.”

In 2010, with additional funding, the project expanded from Whiteville and two other small North Carolina towns to the rest of the country. In the five years since the project began, Abernathy and her students have worked with 12 community newspapers, large and small, located in urban and rural communities. Their research findings are documented in Abernathy’s book, Saving Community Journalism: The Path to Profitability, and in the accompanying free instructional website, which includes content produced by students. 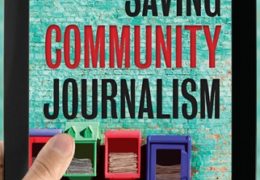 The project has benefitted both the newspapers and the students involved—the students get real-world consulting and marketing experience, while the small-town newspapers receive guidance and resources they wouldn’t be able to get otherwise. Stuart High says they feel grateful that Abernathy selected the Whiteville News Reporter to be a part of this project. “The research that the journalism school did for us, we never would have been able to afford or even conceptualize,” Stuart says. “And not just conducting the market research, but implementing all the necessary changes—we never could have done all that on our own.”

“This is what applied research can look like when the journalism industry and educators collaborate to tackle questions, not in an attempt to save an industry, but to foster democracy away from big city lights,” says Ryan Thornburg, who collaborated with Abernathy on the project.

At a time when technology and the way we consume media is changing so rapidly—almost daily—the intergenerational connections are particularly important. “Community newspaper publishers and editors, regardless of whether they’re in North Carolina or California, worry that they’re out of touch with this next generation,” Abernathy says. “What has been fascinating is to see them begin to understand how they can do things that they had never thought of doing that could be really simple.”

Many of the students are grateful for the hands-on experience. “Delivering ideas, solutions and paths forward that are grounded in research—I think we’ll see a lot more of that out of this journalism school and at schools across the country,” Williams says. “It’s practical training for the students that they absolutely have to have to be successful.”

Penelope Muse Abernathy is the Knight Chair in Journalism and Digital Media Economics at the UNC School of Journalism and Mass Communication, and the author of Saving Community Journalism: The Path to Profitability. Ryan Thornburg is an associate professor at the school. Les High is the managing editor at the Whiteville News Reporter, and Stuart High is the special projects manager. Jed Williams is vice president of strategic consulting at BIA Kelsey, a marketing firm in Virginia. Financial support for research and test strategies came from the McCormick Foundation, with additional contributions from the Knight Foundation and the Hussman Foundation.