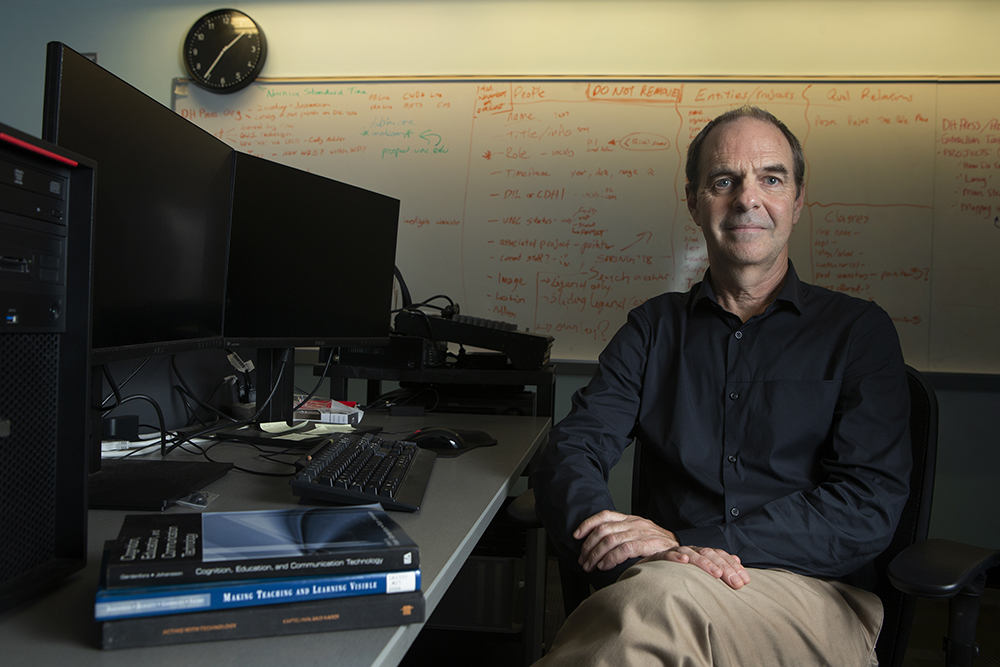 photo by Megan May
English and comparative literature professor Daniel Anderson sees a number of opportunities for humanities scholars in emerging media technologies. He has been working on many fronts to bring digital into the discourse at Carolina.
By Darren Abrecht
Creativity

If you know Emily Dickinsonʼs “They shut me up in Prose,” former undergraduate student Emily Shepherdʼs analysis of the poem for her Introduction to Literary Studies course might take you by surprise. Her video opens on clouds at dusk as the Avett Brothersʼ “Head Full of Doubt” begins to play. Lines from the poem appear over footage of a single bird flying in slow-motion, then a sky full of thousands of starlings — evocations of Dickinsonʼs birds that “…easy as a Star / Look down opon Captivity.”

The takeaways from Shepherdʼs assignment response are not bullet points of information to be memorized, but moments of affect to be intuited.

To coax such reactions from his first-year writing students, English and comparative literature professor Daniel Anderson often has them respond to a literary work in a medium other than the all-too-familiar academic paper. Some students construct a playlist of songs they imagine a short story character would listen to, or, as in this case, recreate a poem as a video.

“I will add technology as a kind of challenge ingredient to an assignment that helps students get shaken out of complacency,” Anderson says. The goal is to find the sweet spot of engagement by combining a familiar classroom task with a brain-jogging twist.

Instead of merely acting as consumers of a text, students are pushed to a new level by taking on a media production role.

“Iʼve got tons of reports from students who say, by the time I sliced up all these words and figured out what image to put with them, and why this sound works and that doesnʼt, I actually had a much deeper understanding and engagement with that poem than when I went into it.”

Itʼs often eye-opening for the professor, too. Anderson learns a lot about his studentsʼ intellectual processes through their projects, and is often surprised by personal touches that they might otherwise be uncomfortable sharing. Shepherdʼs “e-poem,” for instance, includes a photo of a bird taken by her mother.

Anderson is interested in the way that scholars get locked, unwittingly, into certain patterns of thinking by traditional academic tools. He works to break that spell by introducing unconventional, technology-based approaches in the classroom and through his leadership of campus digital initiatives such as the Digital Innovation Lab (DIL) and the minor in Composition, Rhetoric, and Digital Literacy.

Both ancient and modern theory play a role in what he is trying to accomplish. On the one hand, he believes that by breaking with a strictly print-based way of working, scholars can revive modes of persuasion featured in pre-print communication and rhetoric, where speakers tried to convince their listeners using appeals to the whole person — not just to their faculties of logic, but also to their emotions, ethics, and sense of beauty.

On the other hand, he sees in digital media an opportunity to bring to life the deconstructive literary theory of the last several decades. That school of thought shunned the idea of a single, authoritative meaning of a text in favor of seeing literary works as multi-layered “spaces” open to diverse, often intensely personal, interpretations.

Through his own published videos, such as the series “Video Scholarship and Screen Composing,” Anderson makes heavy use of screen capture to draw attention to the desktop computing environment and the role it plays in shaping the writing process.

“We compose on the computer all the time. And we donʼt even think about how that device is shaping what we do,” he says. “So if you actually see the screen, the menus, and that becomes part of the piece, it shatters that transparency that this is just unmediated composing.”

But he wasnʼt always so comfortable with menus and screens. His first encounter with technology as a teacher in the early 90s could only be described as a disaster.

“This was only the second time I had ever taught a class in my life — and I went into the computer lab to print the syllabus out beforehand. I had never used computers before and everyone wanted to make me feel really comfortable. So they said, ‘Donʼt worry about the machines, you canʼt break them. And if a message comes up just click Ok, everything will be fine.’

“I popped my little PC diskette into these new Macintosh computers that they had, and a message came up that said, ‘Unable to recognize this diskette, would you like to reformat?’ So I clicked Ok and erased my syllabus right before I was about to go in and teach.”

With no backup plan, he asked the computer lab techs for help a second time — and they suggested having the students explore IRC, an early internet chat room protocol. What followed was better than anything he had planned for that day. The class struck up a conversation with students in East Germany who had just lived through the fall of the Berlin Wall and were looking forward to reunification with their counterparts in the West.

“Itʼs really colored my teaching over the years,” Anderson says. “You can make mistakes and recover from them. Thatʼs the philosophy that I want to have as a teacher but also that I want my students to have when they make their projects.”

Many projects, one goal

Anderson has published several articles, book chapters, and digital projects documenting his teaching approaches, often with undergraduate collaborators. He and Shepherd worked together to create a portfolio of student e-poems called “I Lit” for The Journal of Interactive Technology and Pedagogy.

All students in first-year writing courses are now required to complete at least one media production project as a result of the Carolina Digital Literacy Initiative, housed in the Digital Innovation Lab. The effort has pioneered a special relationship with Adobe to ensure that students have access to media editing tools free of charge.

The lab has also developed Prospect, a web-based software tool for incorporating data-driven methods into arts and humanities scholarship. Anderson provides help to student and faculty researchers who believe data analysis techniques are a good fit for their work.

“If you wanted every humanist to be deeply involved in data, you would have to do some serious evangelizing and pushing. But I think itʼs better to say when your project warrants it, or if thatʼs a direction that seems necessary or interesting, there are resources available, and people can help you figure out how to do it in a way that is complementary to the intellectual questions you want to ask.”

While Anderson sees much value in traditional approaches to humanities scholarship, he hopes that digital media can help make room for a new conversation — one which thrives by building on earlier scholarly work, rather than tearing it down through critique.

“Iʼm not opposed to that move, but I think that because weʼre so used to the format in which we write, we just do that naturally without thinking,” he says. “The nice part about digital modes is they provide this sort of shake-up, whereby you can start fresh in so many ways.”

Daniel Anderson is a professor in the department of English and Comparative Literature. Emily Shepherd graduated from UNC in 2017.