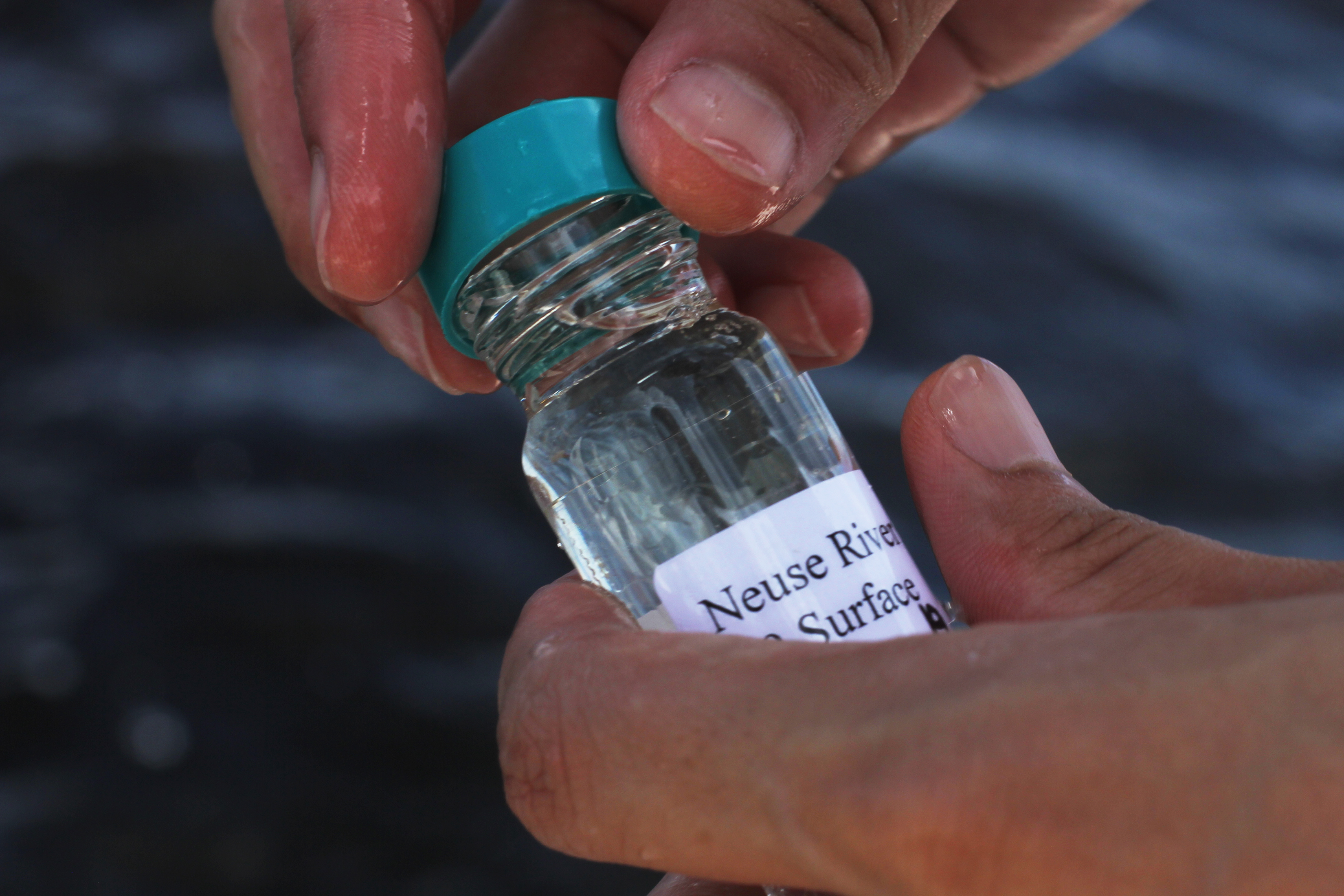 Weida Gong collects a water sample for sequencing from the Neuse River on September 19, 2016.
By Mary Lide Parker
Earth

An offensive stench fills the salty air above the lower part of the Neuse River Estuary near downtown New Bern. It’s the type of smell that hits you slowly – and then all at once, stinging the inside of your nose.

While the smell invades your olfactory senses, the cackles of birds rings through your ears. Hundreds of seagulls zoom in circles just above the surface of the water.

“Sure sign of a fish kill,” says Jeremy Braddy, a researcher from the UNC Institute of Marine Sciences, staring at the mass of birds swarming like vultures.

“How often does this happen?” asks Weida Gong, another UNC researcher, who just moved here from China.

We’re zooming down the Neuse on a small fishing boat—fortunately we’re not here to fish—the boat is packed full of water quality testing equipment. “First you see the seagulls, and then the smell hits you.  Just wait for it.”

Fish kills are one repercussion of a phenomenon called eutrophication. When too much nitrogen enters a water body, algae blooms form, producing a suffocating effect on the water and the fish in it. A textbook example is the Neuse River—part of the Albemarle-Pamlico estuary system which serves as a nursery for 90 percent of commercial seafood caught in North Carolina, according to the NC Division of Tourism.

Neuse River. Pollution. Fish kills. You’ve heard this before. For the past several decades, environmentalists have voiced concerns about it, journalists have reported on it, and marine scientists have looked for answers to why and how this happens.

But now some scientists are taking a new, cutting-edge approach to understanding exactly what’s going on in the water.

Weida Gong, a PhD student from the department of marine sciences, is also on board the boat today. Both Gong and Braddy will collect dozens of water samples from 11 different stations along the estuary, but they will employ different methods to study them—and ultimately produce two very different data sets. Braddy, a member of the Paerl lab at the UNC Institute of Marine Sciences, will measure parameters like temperature, salinity, nutrients, chlorophyll concentrations and pH — the same measurements get taken every two weeks throughout the spring, summer, and fall. “Estuaries are so dynamic and they change from year to year,” Braddy says. “This routine monitoring allows us to determine trends.”

Gong, on the other hand, will use his samples to determine what’s happening inside the tiny microscopic organisms known as plankton that inhabit this water—on a molecular level.

“We are combining traditional methods with molecular level approaches,” Gong explains. “To do this, we’re using lab work and computers together.”

Gong isn’t talking about measurements that can be performed in most science labs or on your average laptop. To sequence genetic information from the environment, he will take his samples from the lab to the UNC High-Throughput Sequencing Facility (HTSF) on the main campus of UNC-Chapel Hill to be sequenced using new, cutting-edge technologies. He will then require the use of one of the largest computer clusters in the US made for UNC researchers by UNC Research Computing to analyze these sequences.

While the measurements collected by researchers in the Paerl lab illustrate the overall quality of the water, they don’t provide as much information about specific types of plankton that are present in a given area — and those specific groups may have important ecological consequences, according to Adrian Marchetti, a UNC expert on the genomics of marine phytoplankton.

“Before these new molecular approaches, it was just sort of this big black box,” he says. “So the nutrients go in to the microbes but we have no idea what happens from there. Now, with molecular sequencing, we’re shedding light on that box and we’re seeing the insides of the different plankton cells and what they’re doing in response to taking up nutrients.”

Say a scientist wants to find out if the phytoplankton in the water column are growth-limited by nitrogen. To test that, he or she would add nitrogen, and then wait for a growth response. “For example, if you think your plants don’t have enough water, you add water and see if they grow,” Marchetti says. “It’s the same with nutrients or other parameters with phytoplankton. The nice thing about sequencing is if we learn what the microorganisms are telling us through the genes they express, we can get that information just from the sequences without having to alter their environment.”

From Taihu to the Neuse

Gong, originally from China, became interested in water quality during his undergraduate studies at Xiamen University — where he studied zebra fish in the estuaries of China’s Fujian province. While there, he became fascinated by the harmful algae blooms within the estuaries, as well as Lake Taihu, the country’s third-largest freshwater lake. “These blooms affect the drinking water for millions of people and really hurts the economy,” Gong says.

Lake Taihu is another location where Hans Paerl conducts research.  His foundational research paired with the lake’s environmental conditions make it an ideal place for Marchetti and his team to do a study. If they can obtain funding, learning about this lake could be very useful, Marchetti points out.

For Gong, studying Lake Taihu on a molecular level would bring his research full-circle. “I want to understand phytoplankton’s behavior under a bloom condition so that we can pinpoint what triggers the bloom and figure out how to end it or even prevent it,” he says.  “Because, whether it’s in China or in North Carolina, it affects the world.”

“From phytoplankton cells to human cells, the universal language of all life is the genetic code,” Marchetti says. “It’s all made up of DNA and expressed as genes made up of RNA.”

Sequencing enables researchers like Gong and Marchetti to look at these organisms from a new perspective. “The patterns in taxonomy we obtain through genetic sequencing are very consistent with what people see when they look down a microscope,” Marchetti says. While molecular sequencing provides a sort of universal alphabet, interpreting the sequences of a dinoflagellate (a particular group of plankton well known for their ability to form harmful algal blooms) is similar to interpreting a foreign language.

“It’s not clear cut,” Marchetti says.” You have to really understand the organisms to be able to interpret what the genes are telling you.”

Dinoflagellates are somewhat unique in that their genomes are large and can be much greater than that of the human genome. “They have massive genomes with what is believed to be a lot of junk DNA,” Marchetti explains. “So in order to filter through that, we work at the level of RNA—it’s only when they decide to express a gene, they transcribe it into RNA, which means it’s probably important.”

Humans are diploid, meaning we have two copies of our genome, which contains 23 chromosomes. But most dinoflagellates are thought to be polyploid—they have many copies of their genome—that’s one reason they’re so large.

Scientists aren’t sure exactly why that is, but they think it may be a “quantity over quality” evolutionary approach to survival. “They’re probably creating a lot of genes that don’t function, but they just keep copying and copying in hopes that every once in a while they’ll produce a beneficial mutation. And then, all of a sudden, that could become the gene that they actually use for some sort of function in their genome.”

This is what these microorganisms have to do in order to constantly keep evolving. “Because they live in this very complex environment that is always changing, but also because of the interactions they have with all kinds of different organisms in this environment,” Marchetti says. “They constantly try to modify newly produced genes and if they screw up, it doesn’t matter—they have back-up copies.”

Monitoring on the molecular level

Approximately 4,000 miles from the Neuse River Estuary, off the coast of Oregon and Washington, 500 miles of cable runs along the ocean floor, powering a robust array of scientific instrumentation.  A massive project of the Ocean Observatories Initiative, the Cabled Array is the first U.S. ocean observatory to span a tectonic plate (the Juan de Fuca plate) and in many ways, it represents the future of oceanographic research.

A group of researchers from the Monterey Bay Research Institute are developing environmental sample processors that can plug into the Cabled Array and work in real time. They are able to take in cells from the water column, extract DNA, and see whether certain microorganisms, like harmful algae species, are present using molecular probes. “Then that information is transmitted from the mooring to a satellite to a computer where the researcher can see it in real time—straight from the water,” Marchetti explains.

Engineering instrumentation that can withstand prolonged periods of time in the open ocean is a challenge that researchers are still dealing with. And while Marchetti’s lab is not working on that particular problem, he hopes that when that data is delivered in real-time, straight from the ocean, he and his team will be ready to translate it.

As time goes on, sequencing genes of organisms in their environment will become more and more common, allowing researchers to have information in real time, meaning they will be able to see when particular harmful algae species are present and whether they are growing. “We can have all different kinds of sensors looking at the ocean,” Marchetti says. “This will finally give scientists the ability to predict when blooms are going to happen before they do.”

Adrian Marchetti is an assistant professor in the Department of Marine Sciences.

Weida Gong is a PhD candidate in the Marchetti lab.