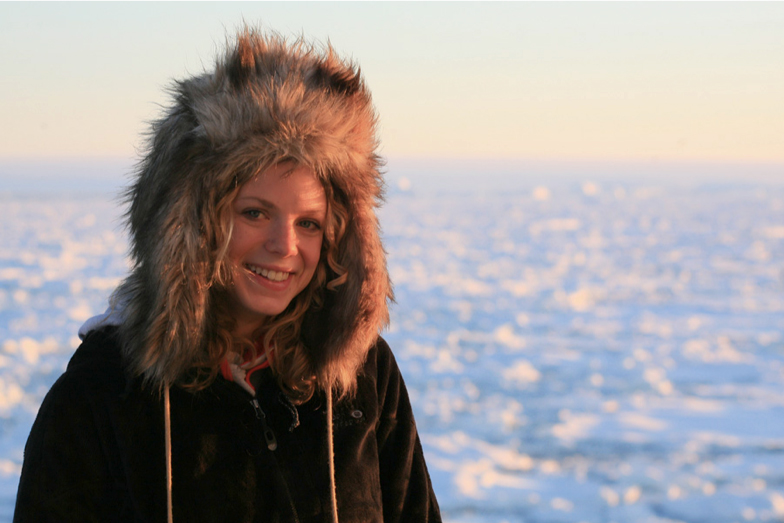 Zena Cardman conducted research with the Palmer LTER group in the West Antarctic Peninsula in January of 2009.
By Mary Lide Parker
Earth

Life-changing moments can come when you least expect them. On a hot August afternoon, Zena Cardman works on her laptop from the comfort of her couch when she feels her phone buzz. The screen displays a number she doesn’t recognize — an area code from Houston, Texas. She hesitates to answer, thinking it might be a marketing call.

She picks it up. A woman’s voice says: “Hello, this is the Astronaut Selection Office.” Cardman stands up and starts pacing around the living room. It’s not a marketing call, and it’s not a joke. “We’d like to have you come down to Houston for an interview.”

“I didn’t know what to say — I was just smiling.” After a few seconds of stunned silence, Cardman says she would be honored.

Back in January, she submitted her resume to the NASA Astronaut Candidate Program. “That’s all the application is — there’s no essay to wax poetic about why you want to travel to space,” Cardman says. “You send your resume to a government website and then you just wait.”

So she waited — and heard nothing for the next nine months. Then, all of a sudden, less than two weeks after she received the phone call from Houston, Cardman found herself at Johnson Space Center.

On her first morning there, she walked down a hallway lined with photos from every era of the space program, from Apollo 1 astronauts practicing egress training in a swimming pool to Scott Kelly floating in the cupola of the ISS.

“I get shivers every time I walk down that hallway,” Cardman says. “The fact that they even want to consider me for this kind of position is amazing.”

A decade before she walked down that hallway at Johnson Space Center, Cardman walked into Venable Hall, home to the marine sciences department on UNC’s campus. She fell in love with biology in high school under the tutelage of Emil Davis, one of her most influential teachers, but it wasn’t until she came to Carolina that Cardman discovered the wonders — and possibilities — of microbiology.

As a first-year student, Cardman fully immersed herself in UNC’s rich culture of science and discovery. She found particular inspiration in an Endeavors article written by another undergraduate student, Kate Harris. “She was four years ahead of me, and had also worked in marine sciences and done research in Antarctica,” Cardman says. “I just thought that was so cool.”

When Cardman thinks something is cool, she goes after it full throttle. “I was dead-set on going south,” she says.

Two years later, she did.

After picking up her cold weather survival gear from a warehouse in Punta Arenas, Chile, Cardman and her colleagues boarded the Laurence M. Gould, a small icebreaker bound for Antarctica, where they spent five weeks collecting data for the Palmer Long Term Ecological Research Network.

The voyage from the southern tip of Chile to the Antarctic Peninsula takes about four days, covering 600 miles of turbulent water — where the Antarctic Circumpolar Current gets pinched between two continents. Widely considered one of the roughest sea crossings on the planet, the Drake Passage can be treacherous. It is also strikingly bleak, as Cardman points out.

“Crossing the Drake Passage felt more remote than anywhere we went in Antarctica,” she says. “It made me think of all of the early explorers who took weeks to make that journey and had no idea what to expect.”

Standing at the edge of the world. Stepping into unexplored territory. These are the types of experiences astronauts specialize in, and Cardman believes her research experience (she’s now participated in three expeditions to Antarctica) has a strong correlation to space travel.

“You’re in a remote place with a limited number of people and you’re relying on this ship as your home and your life support,” she says.

Being a team player is a big part of that dynamic. “You are there to do science. But you have to be just as willing to fix the toilet, clean up, cook, and be part of the daily life to keep your lifeboat running.”

Seven years later and over 7,000 miles from Antarctica, Cardman displays leadership skills characteristic of the best field scientists. She’s in Hawaii, but she’s pretending to be on Mars.

As part of the BASALT (Biologic Analog Science Associated with Lava Terrains) research project, Cardman and her colleagues carry out a simulation for a mission to Mars in Hawaii Volcanoes National Park. Two people play the role of astronauts while Cardman and a group of volunteers run support.

The astronaut pauses to set a marker down next to a jagged black rock, radios to a team member back inside the “Mars habitat,” who in turn hails the remote team on Earth to ask if this should be a priority sample, and then waits. Fifteen minutes later, the team receives the message — it takes a little while for a sound bite to travel from Mars to the scientists “on Earth” (in a building a few miles away).

When humans actually travel to Mars, the reduced gravity will ease the heavy load of tools — they’ll be able to carry more gear, and some of their instruments might be run by robotic rovers.

But to run this drill on Earth, they need some help from volunteers. Cardman, the field support team lead, is in charge of organizing them.

“When I’m talking to people back ‘on Earth’, it means something isn’t working or the weather’s going south,” she says.

Going to Mars appeals to Cardman because she is a scientist. “Doing geology on another planet would be amazing,” she says. “But I never really thought about the requirements for how to direct those scientific investigations. There are logistical roles people have to play – how do you make sure you’re getting good data and good samples when the scientific experts are remote?”

An instrument needs recalibration. An antenna needs to be adjusted. Something simple but essential — like the meter stick used for scale — was left behind and needs to be jury-rigged. Cardman helps rectify those issues — and she does it with positive attitude. “That’s one of the best things about field work. It’s a reminder that we’re all human and we’re bound to make some mistakes,” she says. “It’s a good atmosphere for learning, and it keeps you humble. You just have to learn from those mistakes and improvise solutions.”

Unexpected problems always pop up in the field. “Anyone who has done field work will tell you the same thing,” she says. “And when you’re going to another planet, it’s that much more important to have all of those things figured out ahead of time.”

Cardman studies microorganisms to better understand life on early Earth. Billions of years ago, before plants or animals, before the rise of oxygen, single-celled bacteria and archaea were the only Earthlings. “When we find really ancient metabolisms, they can tell us a lot about what might have been going on in early Earth.” In 2008, with support from a Burch Fellowship, Cardman spent her summer with the Pavilion Lake Research Project in British Columbia. While there she explored modern stromatolites, living versions of our earliest fossil evidence for life on Earth. 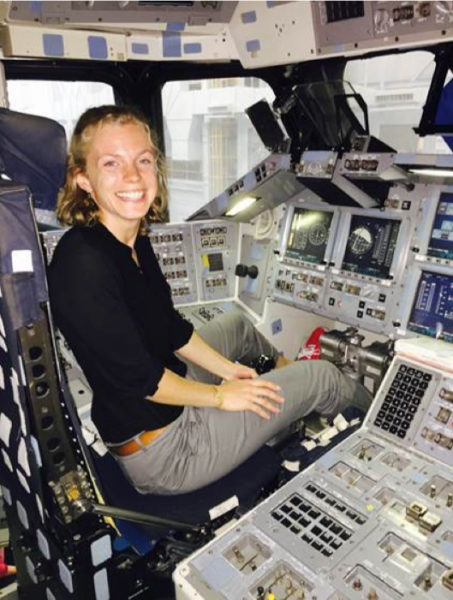 NASA and the Canadian Space Agency also used Pavilion Lake as an “analog” site: Cardman’s first exposure to the logistics of scientific sampling under the constraints of a space mission. But these space exploration analogs extend beyond formal projects like Pavilion Lake and BASALT. “Anytime you’re in a remote place or harsh environment with a small group, you can learn something about what science on Mars might be like.”

Antarctica. The Arctic. Canada. Italy. The Gulf of Mexico. Virginia. Cardman has hunted down microbes all over the world. It makes sense that she would be adept at doing the same thing on other planets.

Unraveling the unique geochemistry of microbes in extreme environments comes in handy as scientists search for life elsewhere in the universe — it’s all about knowing what to look for. “And how to know whether there was once life in that environment or not.”

After the semifinalist round of interviews and evaluations at Johnson Space Center in September 2016, Cardman received another call in December — this time with an invitation to go back to Houston for the final round in late April. Over 18,000 people applied to be in this class of astronauts, and Cardman is one of 50 finalists. Not only is she qualified to be an astronaut — she’s in the top 0.3 percent.

Potential astronauts are an impressive group from all kinds of backgrounds. A test pilot from the Air Force. An emergency room doctor. A former NFL player.

“I’m just a grad student!” Cardman says. “In my microbiology world, I would never find myself talking to someone who flies F22s for a living, but here we are with the same goal.” 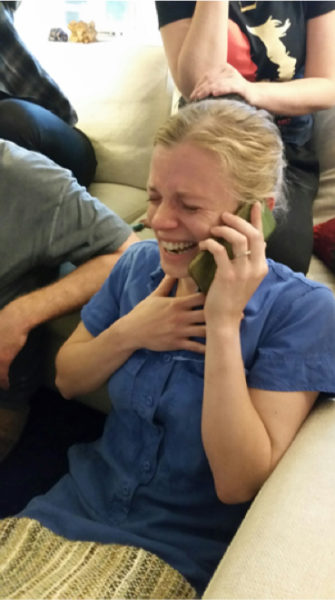 A close friend snaps a picture of Cardman receiving the call of a lifetime.

Socializing is an important part of the process, according to Cardman. “They want to see what kind of person you are, and what your personality is like. And there’s no exact recipe for doing that right.”

After a battery of medical exams, skills-based simulations, and aptitude tests, Cardman is absolutely certain about two things.

“I don’t need to see a doctor any time soon,” she says with a laugh.

And she really, really wants to be an astronaut.

On a Thursday afternoon at the end of May, Cardman receives another phone call—the number with the Houston area code is familiar now. She knew in advance that the Astronaut Selection Office would call on the 25th, whether the final answer was yes or no.

“I was really, really glad to have a few close friends spend that morning with me, otherwise I would’ve been a mess!” Cardman says. “They made breakfast tacos for me, and we started watching Apollo 13. About halfway through the movie the call came. It was one of the most surreal moments of my life! Honored and overjoyed doesn’t even begin to explain it.”

At just 29-years-old, Cardman has accomplished something only the smallest fraction of humans do — becoming a NASA astronaut.

Zena Cardman graduated from UNC in 2010 with a B.S. in biology, Honors in poetry, and minors in marine science, creative writing, and chemistry. She completed her master’s degree in marine science at UNC in 2014. She is currently pursuing her PhD in geoscience at Penn State. 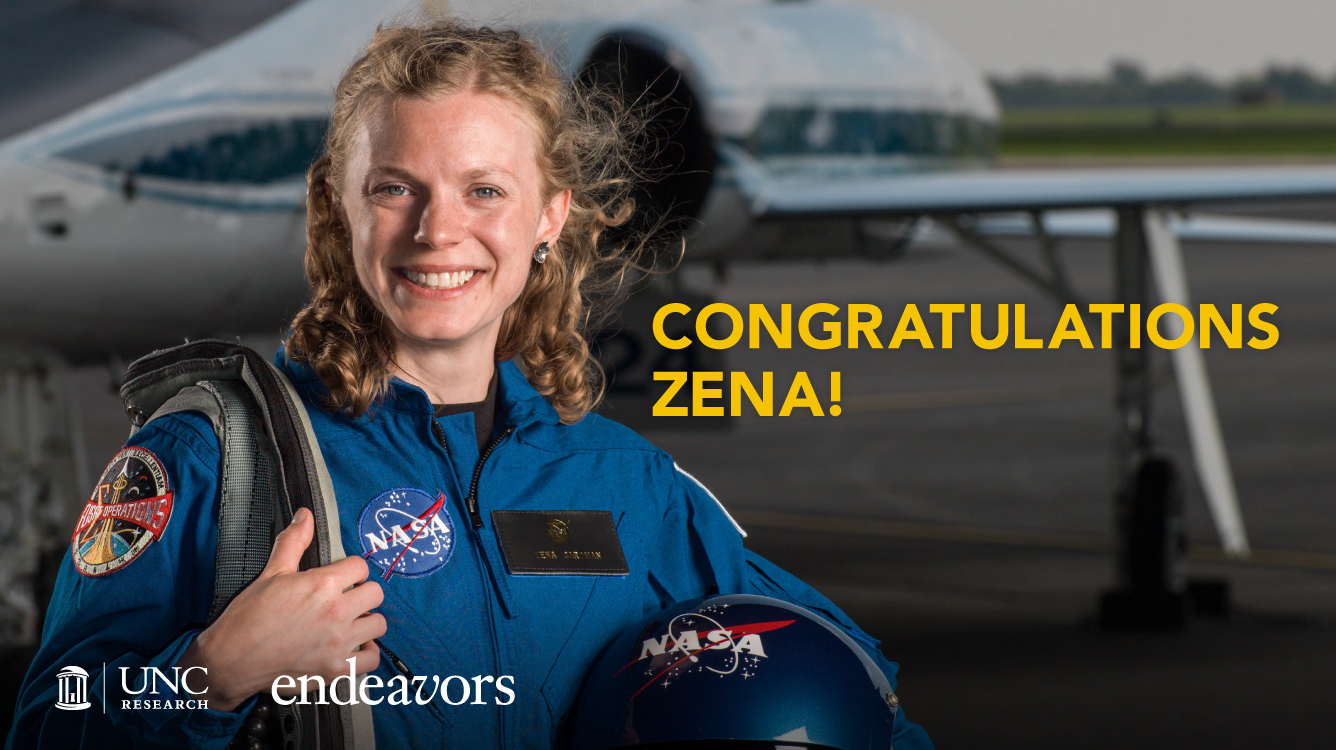