When Jana Haddad describes the small waves and boat wakes that roll into shore from Bogue Sound in Morehead City, she speaks with the kind of enthusiasm that makes her fascination with ocean waves obvious despite her technical language. Standing on the dock outside the UNC Institute of Marine Science (IMS), she can’t help but break into a smile when she talks about the “tidal range,” “dissipation of wave energy,” and “cross-shore transect” when describing the mechanics of waves.

Haddad is a PhD candidate in physical oceanography, and her research informs her unique perspective on waves and fuels her fascination.

“As I started to learn about the physics of waves, I really started to see things very differently at the beach,” Haddad says. “And now I can’t help but feel a sense of wonder and glee when I’m out just looking at waves. I can sit out there forever.”

Persistent shoreline erosion along coastal North Carolina is nothing new. Communities along the Outer Banks have been working to mitigate the loss of shorelines for decades. This past May, the problem garnered the national spotlight when two houses in Rodanthe collapsed into the sea on the same day. 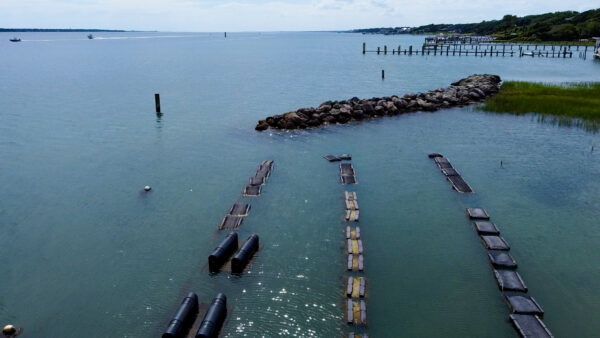 Oyster beds and rock formations can be seen in Bogue Sound near Morehead City. (photo by Andrew Russell)

The idea could potentially prevent millions of dollars of damage to coastal communities across the eastern United States. But to do that, it’s necessary to create models representing how waves interact with specific shoreline elements like soil and vegetation canopy. For that, Haddad must have data.

“It’s very important that we be able to predict how waves are transformed across living shorelines and natural marshes for coastal communities that are interested in putting into place these kinds of shoreline strategies,” Haddad says. “How do we use that data set of waves and vegetation and elevation to inform and improve how we predict how waves are going to be dissipated? That’s what we’re aiming toward with collecting the data.”

For Haddad, IMS and all its unique resources provide the ideal laboratory to better understand how living shorelines could reduce waves to mitigate coastal erosion. Aside from the tight-knit group of scientists, the institute’s physical location on the shores of Bogue Sound and the diversity of shorelines nearby allow access to the rich data set Haddad needs for her research. 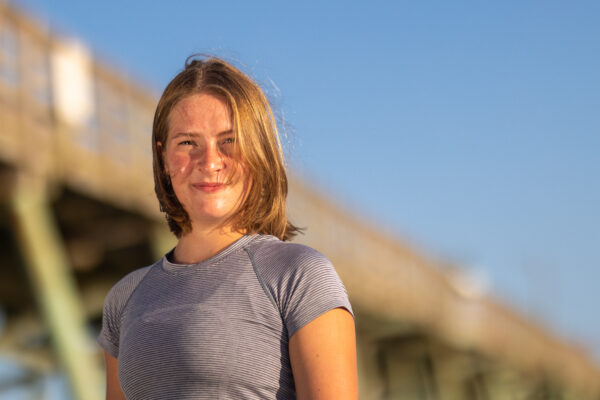 Haddad works with UNC-Chapel Hill researcher Joey Carter, who graduated in May 2022, to get that data. Together, they scout potential locations with naturally occurring features that will dissipate wave energy so they can understand how those features interact with the waves. Once they find a spot to study, they wade out into the water carrying what looks like a fence-post auger with an 8-inch-long sensor strapped to it and secure the gadget into the seabed.

They set up the sensors at various points along the waves’ direction of travel. The first is placed offshore, away from any shoreline features. Then, depending on the quality and direction of incoming waves, they insert a series of sensors in front of and behind the sill and within the vegetative canopy.

This is how Haddad and Carter collect highly detailed information about the properties of the vegetation in the canopy at different distances within the marsh, including measurements of the height and density. For example, they record how many stems are in a particular square meter and their diameter. Then, they feed that data into a computer, allowing them to build a model that predicts how waves interact with the shoreline.

“When we do a deployment, the main thing we care about is: How are the waves being transformed across-shore?” Haddad says. “That data informs the model in such a way that we can improve how predictions are made in these types of environments, and that fills in a gap in our current ability to predict how waves are transformed.” 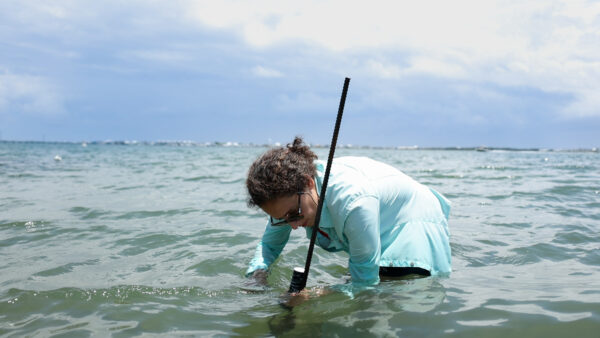 Haddad deploys sensors along the shoreline in Morehead City. (photo by Andrew Russell)

Haddad has a civil engineering background and began her construction career as a project manager in Maryland. She focused on small-scale home remodels, working with architects, managing construction sites, and sometimes picking up work as an architectural drafter. Eventually, she wanted to open her own design-build firm, so she went back to school to get her master’s degree in construction management at George Mason University.

She saw her career path change in a hydrology class examining flooding due to rainfall. The professor was looking for student researchers.

“I wasn’t very immersed in academia,” Haddad says. “And so, frankly, I didn’t know at the time that students could be paid to do research.”

Haddad was assigned a project that focused on coastal flooding driven by hurricanes. It looked at how storm surge flooding interacts with coastal marshes and how natural shorelines can mitigate its effects. It required Haddad to trek out into salt marshes during extreme weather events and collect data on storm surges and how they interacted with the shoreline. This project provided a jumping-off point for her doctoral work.

“I would go out to these marshes during super windy events, and there were a lot of waves,” Haddad says. “You really can’t help but wonder how those waves interact with the marsh. And that’s what got me thinking about waves. I left the construction world behind for this new career path.” 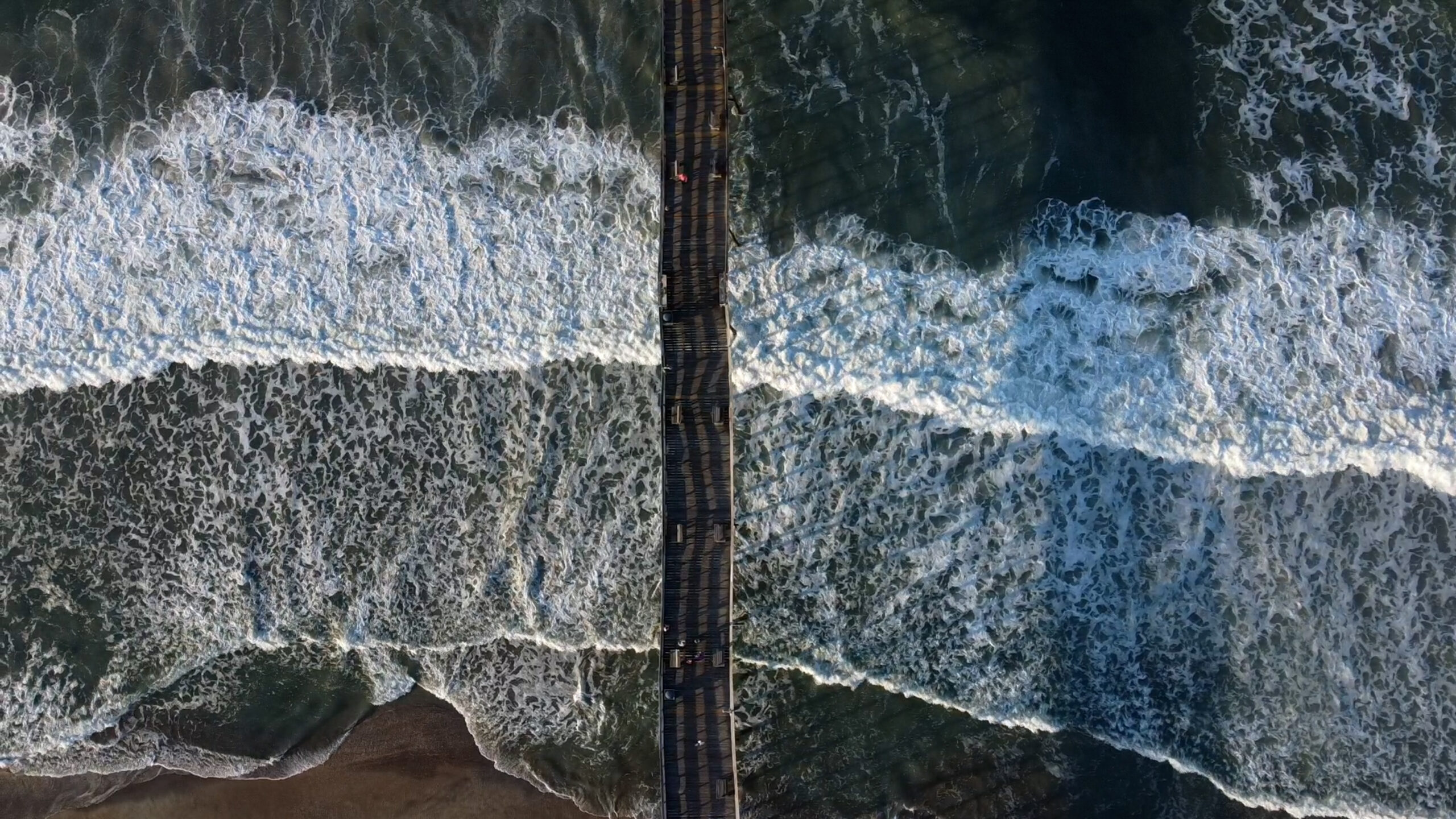 Waves crash against the pier at Atlantic Beach in Morehead City. (photo by Andrew Russell)

Haddad was initially hesitant to make the change, having struggled with math and science from high school onward. She admits that even now, in the final stages of her PhD, finding her confidence can still be a struggle. One thing that helps is working closely with her co-advisor, Johanna Rosman, a physical oceanographer and one of the faculty working at IMS. Haddad is grateful to have a woman who has succeeded in the field of physics show her what it looks like to be confident doing this work.

“I think that more women on faculty doing math and science is the best way for young people to see themselves there and know that they can do it and be unafraid,” Haddad says. “And the bottom line is you can do it. There isn’t a struggle here that you’re not capable of overcoming. And those are things I had to tell myself for a long time and still do once in a while.”

Ultimately, Haddad hopes her research can be used to help coastal communities mitigate coastal erosion. With impending climate change and the rise in sea levels that come with it, coastlines will experience an increase in the frequency and intensity of storms, compounding the problem of coastal erosion.

“It’s my hope that at some point, we’ll be able to turn that simple wave model into an open access, free, user-friendly website so that municipalities or coastal communities or individuals who are property owners along coastlines will be able to use it to inform themselves on what a particular living shoreline design could do to reduce wave heights coming to their shoreline from offshore.” 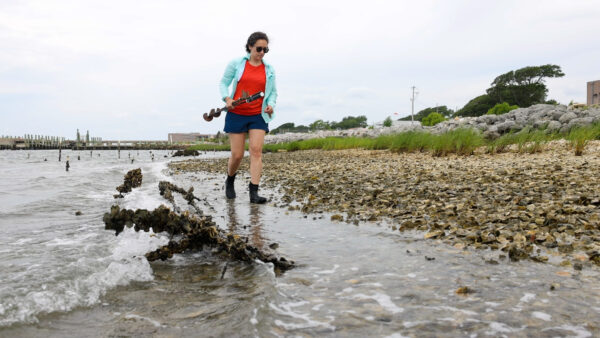 Haddad walks along the shoreline in Morehead City. (photo by Andrew Russell)

While demonstrating a deployment of sensors, Haddad references the surrounding communities and their stake in living shorelines. Standing in waist-deep water, a hundred yards offshore, she looks across the sound to Atlantic Beach, pointing out all the boat traffic and the wakes they leave behind.

“I think we’re uniquely positioned in coastal North Carolina to study the interaction of waves, coastal salt marsh vegetation, and the capacity of living shorelines to dissipate energy from both wind waves and boat wakes,” Haddad says. “Our observations and analysis of that data will hopefully help coastal communities better understand how living shorelines work to reduce wave energy and promote the adoption of living shorelines as a strategy when it’s appropriate.”

Jana Haddad is a PhD Candidate in the Department of Earth, Marine, and Environmental Sciences within the UNC College of Arts and Sciences. She is a member of the Rosman and Luettich Labs within the UNC Institute of Marine Sciences.