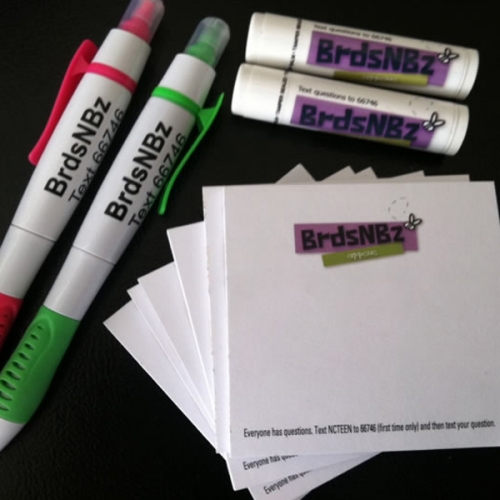 Photo courtesy of Jessica Willoughby Where do young people get information about sex and relationships? The BrdsNBz North Carolina Text Line provides confidential, factually accurate answers to sexual health questions via text message. A young person simply texts a question, and a trained health educator responds within 24 hours. Promotional items like the ones pictured help spread the word to let North Carolina teens know about the service.
By Mary Lide Parker
Creativity

“Can oral sex lead to pregnancy?”

“Does sex hurt the first time?”

Teenagers have lots of questions when it comes to sex, but they often don’t feel comfortable asking adults. What if there were a way for teens to privately, anonymously ask these sensitive questions and get personal, educated answers?

In March of 2009, the Adolescent Pregnancy Prevention Campaign of North Carolina (APPCNC) launched a program to do just that. Called BrdsNBz, it’s a text-messaging service that allows teens to text their sexual health questions to trained health educators at APPCNC, all of whom have degrees in public health and social work.

To help promote the program, Jessica Willoughby, a journalism PhD student, designed and executed a three-month-long marketing campaign in two North Carolina school districts. BrdsNBz received extensive national press coverage shortly after its release in 2009, including a spread in the New York Times. Since then, it’s been used in South Carolina, Maryland, Florida, Texas, Indiana, and New Mexico. Still, many of the teens that Willoughby spoke with had never heard of BrdsNBz.

Willoughby says that teens today spend a lot of time on their phones—they send about seven text messages every waking hour—so a text-messaging service seems like a natural way for them to access sexual health information.  But seeking health information in this way is still new to them. After all, they can always just type their questions into Google, right?

“I think teens are starting to pick up on the fact that they can’t always trust information they find on Google,” Willoughby says. “That’s one of the reasons this service is so important—they’re communicating with a professional who is trained to answer these kinds of questions. They can get accurate answers that specifically address their particular question or concern.” And it keeps the conversation private. “Texting is really appealing to teens. These questions are often sensitive, and they don’t really want to ask them in person,” she says.

To get more N.C. teens familiar with BrdsNBz, and to make sure it serves them in the most effective way, Willoughby knew she would have to connect with students in schools. Her plan was to take promotional materials, like posters and pamphlets, into schools, and then conduct surveys with students to see what they thought of the service. But in the beginning, she ran into some issues recruiting schools to participate.

“Schools are understandably protective of their students and want to ensure they are only exposed to healthy, appropriate information,” Willoughby says. “So we made sure all the posters and materials were reviewed and approved by each school’s administration, and we also sent information home to parents.”

Willoughby received approval from two school districts in Stokes and Cabarrus counties. She started by conducting focus groups and interviews to see how familiar students were with BrdsNBz. Using the information she gathered from those conversations, she created marketing materials—posters, pens, tubes of lip balm, notepads, and water bottles—with the BrdsNBz logo and phone number. She gave the items to school health educators , who helped distribute them to students. Willoughby says about 200 new users registered for the service over the next three months.

“It made sense to do some evaluation via text messaging,” Willoughby says. “Every two weeks we would send a series of questions to new users—basic demographic questions, and would they recommend the service to a friend.” After the three-month campaign ended, Willoughby conducted another anonymous survey—this time in schools. She also conducted focus group interviews to get direct feedback from students. She asked them what they liked about the service, what they didn’t like, and what they used it for.

From the survey she found that 14 percent of teens who had heard of BrdsNBz had used it. She used the focus groups and interviews to learn more about why teens didn’t use the service. “The conversations were really helpful,” Willoughby says. “A lot of people said they had heard of the service, but they weren’t sure how to use it. Some said they just didn’t think of it, and some said they didn’t hear it advertised as much as other things.”

Willoughby says the health educators were a crucial part of the campaign. “For something like this, word-of-mouth marketing is still one of the best approaches,” Willoughby says. “It’s the type of thing that doesn’t have to be expensive or time-consuming—just a few people being on board to help make teens aware of the service.” Simple incentives, like offering free water bottles to students who saved the BrdsNBz number in their phones, were very effective as well.

Kennon Jackson, Jr., director of BrdsNBz National, says Willoughby’s work has been invaluable to their organization. “Her dedication to carrying out this marketing project and to helping APPCNC understand the needs of youth in North Carolina have really moved the service beyond what we saw possible in 2009.”

Willoughby says she’s excited to continue working with APPCNC. “We want to keep the promotion going and help North Carolina teens learn more about the service and increase access to it,” she says. “This is a big first step in helping youth and young adults to make well-informed decisions about their health.”

Jessica Willoughby received her PhD from the UNC School of Journalism and Mass Communication in 2014.