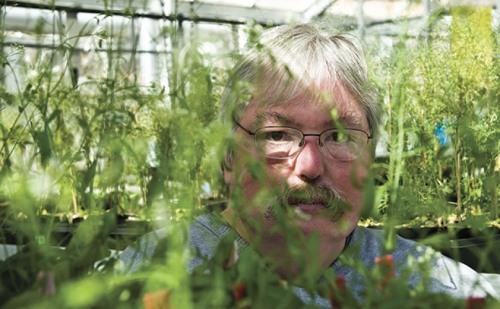 “You can’t digest your food.”

Jeff Dangl isn’t a doctor—he’s a plant biologist. But he’s right about my guts. The trillions of microbes in my intestines help me break down food and absorb nutrients. I knew that much. But I never realized that it works the same way for plants.

Instead of digestive tracts, plants have millions of bacteria on their roots and in the soil. Some of these microbes may be opportunistic hangers-on or even foes—but many actually help plants grow and thrive. 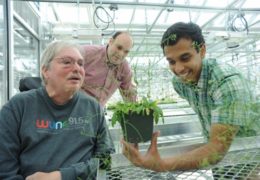 A custom-made cocktail of microbes, applied to a plant or a seed, could increase crop yield, protect the plant from drought, and fight off pests without using insecticide. But before agricultural biotechnology companies can start making microbe recipes, they’ll need to know which microbes work best and which ones go together. For that, scientists like Dangl at UNC are discovering what each bug does and whether it should be part of the mix.

Joe KieberA microbe that seems good at fixing nitrogen, for example, doesn’t always fix nitrogen. “It might do great in the field from whence it came, but if you take it to a different microbial community, it doesn’t work,” Dangl says. There are millions of microbes in the soil around a plant, he says. Thousands on each leaf. That’s an astronomically high number of microbe-to-microbe relationships to figure out.

But first, Dangl’s colleague Joe Kieber explains why microbes matter. “The earth is going to have two billion more mouths to feed by 2050, and we’re pretty much at carrying capacity with our agricultural land,” says Kieber, a UNC molecular biologist who studies how plant cells communicate. “Even if the food were perfectly distributed worldwide, we’re not going to be able to feed two billion more people without increasing yield in some way.”

For areas struggling with drought, we could use microbes to help plants grow with less water, Kieber says. But drought resistance isn’t just for East Africa and other already-dry places. Worldwide, more people and more pollution means that less fresh water is available for irrigation each year, so many plants could use a microbe boost to help them grow in drier soil.

Hardier plants, better crop yield, protection from insects and pathogens—these are the goals of the fast-growing agricultural biotechnology industry, which has taken off in North Carolina’s Research Triangle. BASF, Syngenta, Bayer, and Monsanto each have centers here, along with many small startups. 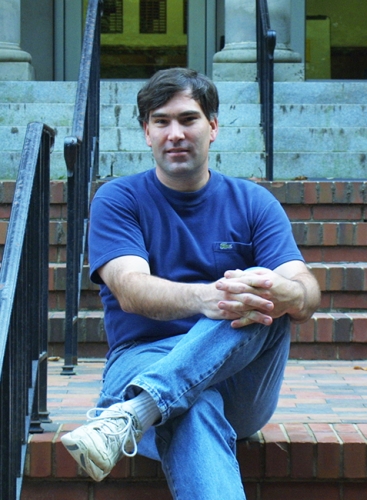 Earlier in 2014, one Danish biotech company, Novozymes, was trying to decide where in the United States to build a new research facility. After a meeting with Triangle-area universities, Novozymes started talking with Kieber, Dangl, and a few other UNC microbiologists about what the company hopes will be a years-long collaboration with UNC to make microbe cocktails.

“When you develop a product, you need all the pieces in place in a lab setting to tell you if it’s going to work,” says Thomas Sorensen, director of R&D at Novozymes. “That basic research is going on at UNC.” Novozymes announced in April that it will build its new research center in Cary, North Carolina, where it will employ 100 people.

Many skills and steps go into building a plant-enhancing microbe cocktail, Dangl says. The microbes have to survive shipping. Then they have to survive being stored on a farm in a barn that might be scorching hot in summer and well below freezing in winter. Finally, the product has to scale up—you have to be able to make a lot of the bacteria.

If there are millions of microbes on and around a plant, how do you tell which ones are helpful? Instead of investigating all the bacteria, Dangl says, he lets the plant be his guide.

Out of the thousands of types of microbes in the soil around a plant, only a small fraction—meaning hundreds—make it inside a plant’s roots or onto its leaves. Some of those microbes are probably unwelcome invaders, but Dangl figures the plant lets at least some of them in on purpose. His lab has found that many plants share a core microbiome: a set of microbes that live in and around the plants. The more closely related two plant species are, the more similar their microbiomes.

Some bacteria, we know, supply plants with food. “The plant makes sugar from the sun, and that sugar, that carbon, gets pumped out of the roots in forms that attract microbes that have phosphorous. The microbes bring the phosphorous to the plant and eat the carbon,” Dangl says.

Other microbes fight off bad bacteria that cause disease. The plant in turn can help the microbes by making food for them and improving the pH of the soil.

“Since a plant is born and lives and dies in the same place, it has to be able to negotiate with that environment,” Dangl says. “Genetically identical seedlings might germinate in five different soil types and need to balance their nutritional requirements differently in each one. Maybe the soil is phosphate-poor. Or maybe it’s nitrogen-poor. Maybe the soil’s acidic, and the plant has to sense that and buffer itself.”

One of Dangl’s goals is to put together a team of 20 bacteria that can help crops in several ways at once. “Pick four traits you want,” he says. “For that, I need five strains per trait that each do the same thing. If strains 1, 2, and 3 can’t work, strains 4 and 5 step in. We have to understand the rules of how the 20 strains interact with each other and with the plant, such that when we dump them in soil that’s not where they came from, there’s a high likelihood they’ll still work.”

Dangl and his team test these communities of microbes by applying them to genetically identical plants and then exposing the plants to rough conditions, such as low phosphate in the soil. After six weeks, they evaluate the plants—which ones look healthy and large, and which look unhealthy and puny? “We look at the top 5 percent of performance—do they share some community members?” Dangl says. By “community members,” he means bacteria. The ones that show up in the plants that grew well are candidates for further study.

When these cream-of-the-crop bacteria have been thoroughly tested, they may make a stop across the hall, in the lab of Elizabeth Shank. Here, Shank’s lab uses advanced imaging techniques to minutely measure everything going on in a sample of bacteria.

“When you put two bacteria together, it may look like they’re ignoring each other, but really they’re responding to each other chemically in dramatic ways,” Shank says. “We’ve also done plant-root imaging where we can see what kind of metabolites the roots are producing. Does it change when we put them with bacteria?”

Sorensen from Novozymes thinks they could use the Shank lab’s imaging to show that a microbe cocktail works. “When you want to have high yield of soybeans, for example, you need microbes to make the plant better at fixing nitrogen,” Sorensen says. “Beth is working on technology where you can document what happens in the real application. We’re in need of ways to show our customers how a microbe product does what we say it’s going to do.”

Treating a plant with microbes sounds fine to Dangl, but at the same time that he’s looking for good bugs, he’s also looking for good DNA. In 2012, he helped found an agricultural biotech company, AgBiome, to find helpful microbes to use on plants and also to put bacterial DNA directly in plant genomes. (See sidebar: “AgBiome”.)

Many plants have only a single gene that protects them against a harmful microbe, Dangl says, and the microbe can eventually mutate around the gene. Build in a second gene to resist the same pathogen, and you double the amount of time it takes a microbe to evolve its way around the plant’s defenses.

A few years ago, just finding these helpful genes was very difficult, Shank says. How do you take a handful of dirt and find the one tiny microbe with the one gene that might do what you want? Today, scientists use gene-sequencing equipment in facilities like UNC’s Genome Sciences Building to read all the DNA in a sample quickly and completely.

Genetically modified plants can be controversial, but it’s hard to ignore the environmental benefits, Kieber says. “The right cocktail of bacteria could improve the efficiency with which plants take up fertilizer—so maybe you could use less fertilizer, which would save the farmer money and would also mean less runoff into lakes and rivers,” he says.

But there’s no such thing as a genetically perfect plant. “There are plenty of things that Bt doesn’t kill,” Dangl says. “When you eliminate one pest, that’s less competition for other insects.”

It’s the same way with fungi and other pathogens that attack plants—genetically engineer resistance to one, and others will eventually take its place. To help feed the world, UNC plant scientists will have to stay a few steps ahead.

The genome-sequencing facility in UNC’s Genome Sciences Building was paid for with money from the University Cancer Research Fund, an investment by the N.C. General Assembly to fund innovative research to detect, treat, and prevent cancer.