The moment I realized that research in computer science was actually a thing! Even though I had been a computer science major, I did not understand how much research could be conducted within the field because it seems like we have everything figured out already. When I talked to researchers and a faculty member in the department, I realized how much there still is to do within the computer science field. Our technology is really advanced, but we still lack the right technology to help people with disabilities use it the same way that people without disabilities do. And when I learned this, I decided research was the path for me. 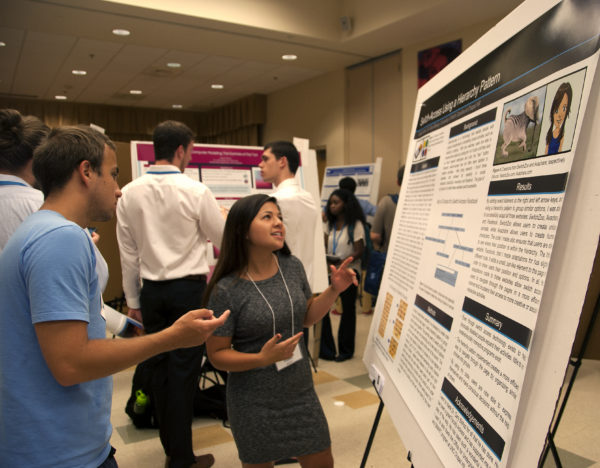 Victoria presents her findings on “Switch-Access Using a Hierarchy Pattern”

I was trying to imitate a user action with the keyboard, such as a key press, and spent days figuring out how I could do it. My program involved working with Facebook, and their security was high and did not allow for normal actions to be executed the way they usually are. I had tried to go about the problem so many ways and searched through so many posts and articles. I tried a lot of things and nothing seemed to work, so when I stumbled upon this very short piece of code — a method actually — I already doubted that it would work. It turns out that simple method was the answer to a couple days’ worth of stress. It was like I had been mining forever with no success and then, all of a sudden, struck gold. It’s an addictive feeling and I think that is why I, and a lot of other people in the field, put so much effort and patience into programming.

Never feel intimidated or incapable. Everything is possible and within your reach. When I started research I knew nothing about the subject or coding language I would use and I taught myself entirely through online resources.