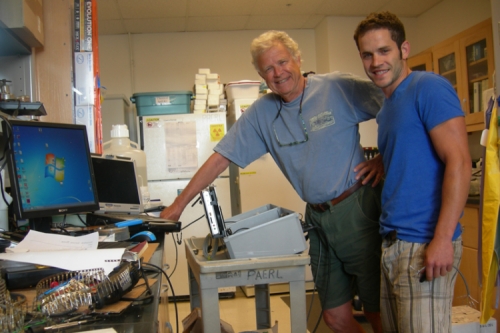 Photo courtesy of the UNC Institute of Marine Sciences
What do estuaries do for our environment? They absorb CO2 and store it. Hans Paerl, along with Ph.D. student Joey Crosswell, discovered that when tropical storms or hurricanes hit our estuaries, they cause carbon dioxide that has been building up for years to be released all at once.
By Mary Lide Parker
Earth

Imagine being stuck on I-40 during rush-hour traffic. Picture all the car exhaust rising up from idling engines. Now imagine how much worse it would be with eight million more cars on the road. That’s how much carbon dioxide—8 million cars’ worth—was emitted into the atmosphere when Hurricane Irene hit the east coast in 2011, according to UNC researchers.

But the carbon dioxide released during that storm didn’t come from cars—or anything man-made. It came from our coast’s estuaries. The water, marsh, and mud of an estuary act as a natural sponge for carbon dioxide, says Hans Paerl, a researcher at the UNC Institute of Marine Sciences. Marsh grasses, sea grasses, and microscopic algae in the water perform photosynthesis, and the thick marsh mud and surrounding water “ingest” the organic carbon, packing it down into sediment for long-term storage. “In normal conditions, the estuary takes in more CO2 than it gives out, using photosynthesis to fix carbon dioxide into organic matter,” Paerl says. “But when a storm comes, all bets are off.”

For the past four years, Paerl and his students and technicians have been studying how estuaries in North Carolina fix carbon, and what happens when that process is interrupted by a major weather event like a hurricane. “The hypothesis was that when a major storm comes in, some of the CO2 that was stored in the estuary must be released back up into the atmosphere,” Paerl says.

When an estuary gets hit by a major weather event, the system mixes violently, churning the waters and suspending much of the sediment in the water. The organic matter that has been packed down into the mud is degraded by microbes and gets converted back into carbon dioxide. Meanwhile, the water turns very murky, making photosynthesis almost impossible. The perturbation also causes carbon dioxide to leave through gas transfer. All of these actions result in a massive carbon release, or a “burp,” back into the atmosphere.

The study began in 2010—the third most active Atlantic hurricane season on record—but no storms hit North Carolina until August of 2011. Irene, a category one hurricane, was large enough to cause major damage and open up a new inlet across the fragile Outer Banks, but it was not nearly the most destructive storm North Carolina has ever seen.

In addition to knocking out power, flooding streets, and uprooting trees, Hurricane Irene also released about 600,000 metric tons of the greenhouse gas carbon dioxide from the Albemarle-Pamlico Sound estuarine system. Paerl’s group calculated that it had taken two years for the estuary to fix that carbon—and then it was all released back into the air in one day.

To put the amount in perspective, “it would be like adding two million more cars to the road for an entire month,” says Joey Crosswell, a PhD student in Paerl’s lab who conducted much of the fieldwork. After hammering eastern North Carolina, Irene also hit the Chesapeake Bay, the Delaware Bay, and the Long Island Sound. “If you scale things up to include all of those waters, the numbers really become impressive, equaling approximately 8 million cars,” Paerl says.

That release of carbon dioxide leads to atmospheric warming, which increases the surface temperature of the ocean, which in turn generates more frequent and more intense storms, which promote more carbon dioxide venting from coastal systems. “But that sequence can’t operate forever. You have to have fuel to keep that engine running,” Paerl says. “The fuel is the stuff that gets washed into the estuary—the new carbon. It’s a super-huge positive feedback loop.”

So we can’t stop hurricanes from making the trek across the Atlantic to the Carolina coast, but is there anything to be done about diminishing the feedback loop?

The “terrestrial stuff” includes everything that flows off the land and into the estuary during a storm. To reduce the amount of that stuff, Paerl says we must minimize the runoff of nitrogen and phosphorus-rich fertilizers, washout of wetlands, and loss of the landscape by erosion, all of which contain these nutrients as well as plant and animal matter that can be converted to nutrients and carbon dioxide by microbes in the estuary. “The nutrients support algae blooms,” Paerl says. More algae blooms mean more organic matter entering the estuary that can be converted to carbon dioxide and “burped” back into the atmosphere during storms.

Paerl says it all comes down to protecting our watersheds: dealing with septic systems responsibly, reducing sedimentation, and properly handling storm-water runoff on farms and in urban areas. “If you take the long view, the total frequency and intensity of hurricanes has gone up worldwide,” he says. “Things are happening to maintain this feedback loop.”

Hans W. Paerl is the Kenan Professor of Marine and Environmental Sciences at the UNC-Chapel Hill Institute of Marine Sciences. Joey Crosswell was a PhD student in the Paerl lab, and he is now a postdoc at the University of Technology in Sydney, Australia. Data were collected by the FerryMon and ModMon programs. This research was funded by the National Science Foundation Chemical Oceanography Program. The paper was published in late August by the Association for the Sciences of Limnology and Oceanography.