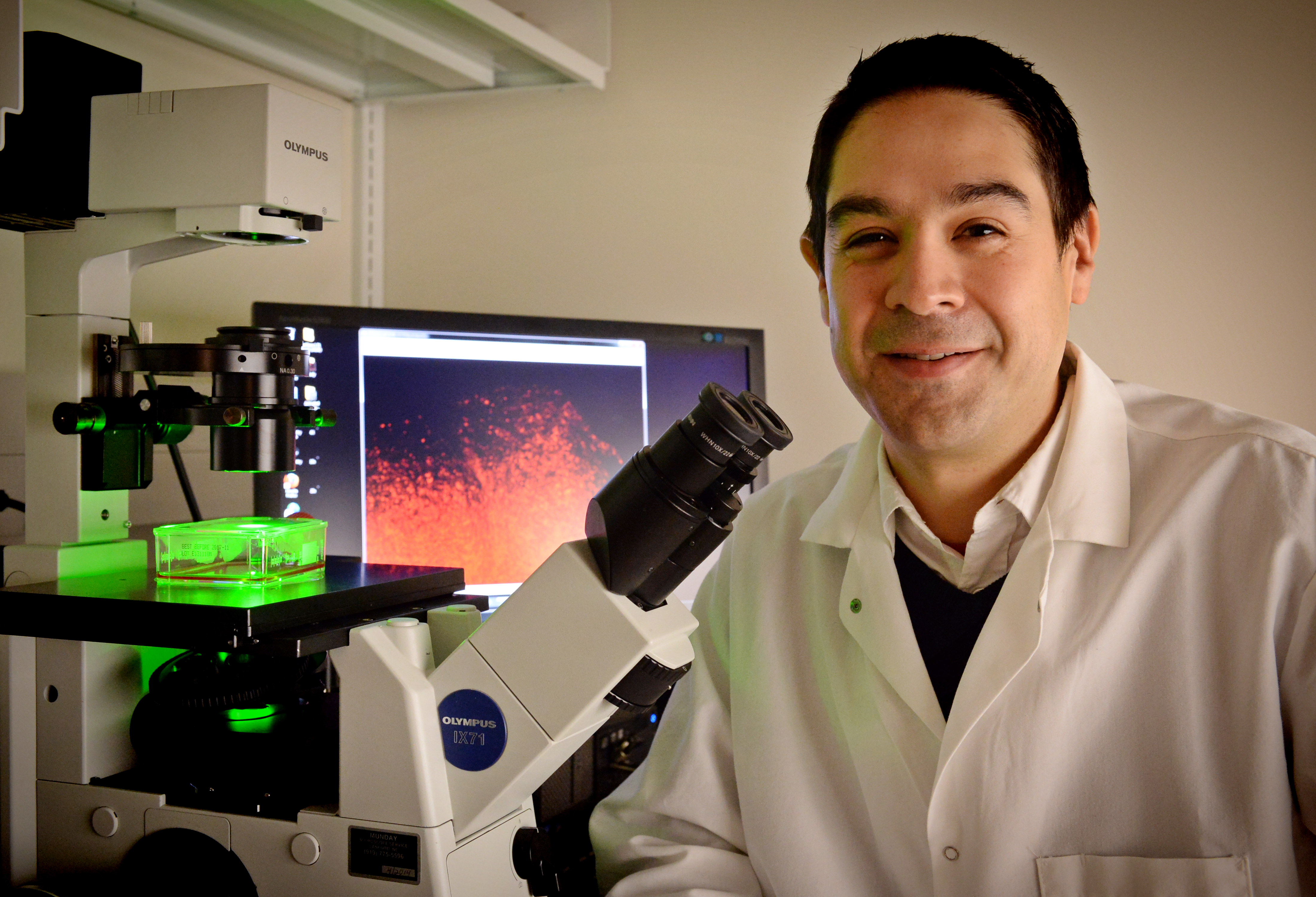 In February 1937, the famous American composer George Gershwin proudly stood before the Los Angeles Symphony Orchestra. During his performance of Concerto in F, the smell of burning rubber hit his nostrils hard and he fumbled on stage, ultimately blacking out. After seeing a doctor who found no sign of serious illness, he went on to complete the musical comedy “A Damsel in Distress” and resumed his normal activities. By June, though, he regularly suffered from headaches and dizzy spells. Then, in July, he slipped into a coma and died.

Today, a diagnosis of glioblastoma — an aggressively cancerous brain tumor — is often equated with a death sentence. It marks what can become a long descent into cognitive impairment, excruciating headaches, personality changes, failing motor skills, and an inability to speak. For the patient who arrives at their primary care physician reporting recurrent headaches and then eventually learns they have a glioblastoma, they may be told that they have a 5 percent chance of survival for the next five years. For patients with especially aggressive tumors, survival rates shrink to just one year.

Few treatments exist for glioblastoma and the need for better patient care is dire. Typically, surgery is performed to extract a tumor several centimeters in size from the brain, and then patients are administered chemotherapy or radiation. Even so, most patients with the disease have little hope of long-term remission. Shawn Hingtgen, an assistant professor in the UNC Department of Phamacoengineering and Molecular Pharmaceuticals, is dedicated to reversing the grim prognosis faced by these patients.

“We’re making tumor-homing stem cells that act as drug carriers to target brain cancer,” Hingtgen explains with enthusiasm. “These stem cells can seek out the tumor and deliver drugs to destroy cancer cells in a way that other drugs cannot.”

While surgical removal of the tumor followed by chemotherapy or radiation can be moderately successful for some patients with glioblastoma, the trouble is often that surgeons can neither locate nor remove all of the elusive patches of cancer woven throughout the brain tissue. Glioblastomas typically do not metastasize to other organs of the body like breast, lung, or pancreatic cancers, but the tumor cells can penetrate deep into inaccessible regions of the brain, far from their origin.

“The patient is going to come in and have surgery if they can, then they’ll receive oral chemo and radiation,” Hingtgen says. “But due to the nature of this disease, and many other cancers, the surgeons can never get the entire tumor out. They can’t see every piece of it, so they never know what they’ve missed.”

While the site of the primary tumor is cleared during surgery, there is no safe or effective way to seek out and destroy the spidery tendrils of cancer tissue that wind away from the initial tumor without damaging a patient’s brain. But hope is on the horizon. Where even a surgeon’s most meticulous scalpel is unable to remove a sliver of tumor, a type of stem cell designed by Hingtgen and his colleagues are able to clean up the rest.

A video he shows demonstrates the effectiveness of this strategy.

Glowing green stem cells advance across the screen, poised for battle. At the end of their crawl, these incandescent cells unload chemical warfare upon their adversaries — red glioblastoma cells. Overwhelmed by the stem cells, which are armed with an anti-cancer molecule, some of the glioblastoma cells die and diminish into nothing. “This video,” Hingtgen states, “demonstrates the powerful potential of human-induced neural stem cells to combat cancer.”

Hingtgen’s stem cells are derived from skin cells that are transformed through manipulation of gene expression into neural, or brain, stem cells. In effect, the cells lose some of the characteristics that make them specific to skin tissue and gain a more rudimentary and flexible nature, reverting back to a state where they have the potential to become any type of neuronal cell.

Stem cells are especially adept at sensing the chemical signature given off by cancer cells. “Neural stem cells sense the growing tumor and are attracted to it,” Hingtgen says. “Our neural stem cells will migrate toward and bump into the tumor tissue, but won’t be able to kill the tumor by themselves, so that’s why we have them carry and deliver anti-cancer drugs.”

These cancer-fighting molecules consist of both current clinical candidates used in other types of cancer treatment as well as experimental agents. They can severely curtail the growth of cancer and lead to tumor cell death. It’s often difficult to treat brain tumors with drugs because of the blood-brain barrier — a difficult-to-penetrate membrane that keeps harmful toxins away from the brain. This prevents successful delivery of anti-cancer agents. Neural stem cells loaded with drugs and inserted directly into the brain act as ground forces that deliver these cancer-toxic agents directly to the tumor.

The road to a scientific breakthrough is often paved with difficultly. So far, experiments with mice have proven successful, but using both skin and glioblastoma tissue from actual humans has been fraught with minor difficulties. “Every person and every case of glioblastoma is different, so the tissue we’ve received to work with comes with its own set of challenges,” Hingtgen says. “The good news is that we are figuring out how to overcome these tissue-specific differences.”

Early in development, the stem cells also had trouble growing inside the brain tissue of mice following surgical removal of the main glioblastoma tumor, according to Hingtgen. In some cases, surgical removal of the primary tumor allowed its hidden margins to fill in the empty space and grow better. Like a malignant rosebush that blossoms more robustly after pruning, these diffuse wisps of tumor can grow with a vengeance after surgery. The neural stem cells in the surgical cavity need to stay there long enough for them to deliver drugs to remaining tumor cells.

“The stem cells were being washed away or destroyed by the immune system, so we turned to the expertise of the joint UNC and NCSU Biomedical Engineering department. They fashioned a flexible scaffold on which to embed the stem cells before inserting them into the mouse brain,” Hingtgen says.

This scaffold is essentially a tiny, disc-shaped platform made of fibrous protein on which the stem cells can attach and grow. Following surgical removal of a glioblastoma, the cup-like structure is positioned in the place where the tumor was previously growing. The scaffold has so far proven successful at retaining the neural stem cells long enough for them to seek out and destroy glioblastoma in mice. In fact, the survival rate nearly tripled for mice that received the treatment.

It takes a village to treat a disease

Hingtgen credits the hard work of his team for the success of this potential therapy. From the folks in his lab, to the bioengineers, his FDA contacts, collaborators at other universities, and perhaps most importantly, the surgeons and clinicians from whom he’s sought advice, it’s proof that conquering one of the most foreboding human maladies requires a team of dedicated experts.

As a relatively new assistant professor, Hingtgen acknowledged early on that he would need some help to see his vision through. Before he moved to UNC, he recalls nervously calling Matt Ewend of the UNC Department of Neurosurgery to ask for some advice. Ewend was on a ski lift with his family when he received the call, but Hingtgen’s vision excited him enough to schedule a meeting.

“From the beginning, Matt has been a massively helpful member of the team,” Hingtgen says. “In our first meeting, he said to me, ‘We’ve got to make these stem cells from the patients themselves, and you’ve got to get these cells to me so I can put them into the patient.’”

Taking Ewend’s advice to heart, Hingtgen is trying to bring stem cell therapy to the personalized medicine front. “You are your own best source for stem cells, and using your cells will limit the trouble of tissue rejection following implantation. We can’t just go in and lop cells out from a person’s brain, though, so the skin gives us a more readily available source of cells to transform into neural stem cells,” he says.

Hingtgen originally started using mouse skin in his experiments, but has since been able to extend his work to human skin and clinical samples from the brains of patients with cancer. Published work from his lab demonstrates that his neural stem cells loaded with the anti-cancer molecule, TRAIL, can drastically halt the growth of a tumor and can almost triple the survival of mice implanted with glioblastoma tissue.

The stem cells and scaffold would both be classified as “first-in-human” trials by the FDA, and deciding which drugs the stem cells should carry adds yet another layer of complication to getting this treatment approved for human trials. Hingtgen works closely with experienced individuals to help his research navigate the careful rules established by the FDA to determine whether a treatment is both safe and effective for human patients.

He remains hopeful that FDA approval for clinical trials will be swift: “We are working on making our final product, and we’re lucky to have a good team, so we can move quickly.”

From the breast to the brain

In the future, Hingtgen sees potential to use stem cells for other types of cancer treatment. He’s already got plans in motion to try his system with tumors that start in the breast and spread to the brain. Additionally, he’s working with pediatric neurosurgeons to evaluate the potential of neural stem cell therapy for medulloblastoma, a type of brain cancer that primarily affects children.

The ominous portent of these life-taking tumors does not dim the hope or the resolve of Hingtgen. It’s comforting to know that patients suffering from the nefarious ordeal of brain cancer have such an energetic and dedicated ally. “The main thing I’ve always wanted to do — and still want to do — is put this technology to use in patients and make a difference in their lives.”

Shawn Hingtgen is an assistant professor in the Department of Pharmacoengineering and Molecular Pharmaceuticals in the UNC Eshelman School of Pharmacy. He is also a member of the Lineberger Comprehensive Cancer Center.

Matt Ewend is the Van L. Weatherspoon, Jr. Eminent Distinguished Professor and chair of the UNC Department of Neurosurgery. He is also the group leader of neurooncology in the UNC Lineberger Comprehensive Cancer Center. He was featured on the 2015-2016 list of “Best Doctors in America” and also in the Newsweek’s 2015 “Top Cancer Doctors” list.

The Department of Pharmacoengineering and Molecular Therapeutics at UNC was established to blend materials science and engineering with pharmaceutical sciences in order to develop safer and more effective therapies and diagnostic tools. This program is among the first of its kind in the United States.