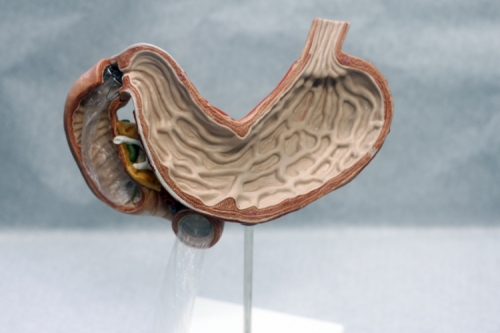 Photo by Mary Lide Parker The EndoBarrier is a new device developed by GI Dynamics to help control type 2 diabetes. Researchers at UNC-Chapel Hill are participating in the first major series of clinical trials in the United States.
By Mary Lide Parker
Health

Living with diabetes is a daily challenge. Many patients juggle multiple prescriptions, injections, and special diets, and some even undergo gastric bypass surgery to alleviate their symptoms. But there may be a better treatment option for people living with type 2 diabetes. UNC researchers are studying a new device that could allow patients to control their diabetes without drugs or surgery.

Led by Laura Young, UNC is participating in a nationwide trial of a new device called the EndoBarrier. According to Young, the placement of the EndoBarrier is similar to an upper endoscopy. The physician inserts the device through the patient’s mouth, down the throat, and into the GI tract. The EndoBarrier is anchored into the pylorus, below the stomach, and then snakes down into the upper small intestine, where it blocks the absorption of digested food.

“It’s not that the patients won’t absorb any food or nutrients,” Young says. “Nothing gets through the barrier, but absorption also occurs further down in the GI tract, so the patient is not going to be nutrient deficient.”

But blocking digested food is not what makes the EndoBarrier effective. Young says the presence of the barrier creates a hormonal change. “When we eat, the digestive tract stimulates the secretion of hormones, and they play a role in satiety, sending signals to the brain that say, ‘Stop eating, you’re full now,’” Young says. “We know that in patients with diabetes, those hormones don’t work quite as well.”

After the EndoBarrier is placed, the patient spends one week on a liquid diet. Young says patients have to exercise some caution as they start eating solid foods again. “We ask that they eat fully cooked vegetables so that they’re not getting big, raw chunks of vegetables that could potentially cause problems with the liner,” she says.

When it’s placed, the patient may have nausea or mild pain that usually goes away after a day or two, according to Young. The procedure itself takes 20 to 30 minutes, and the patient typically goes back to work the next day. Compared to gastric bypass surgery, the EndoBarrier has the potential to be much less invasive, more convenient and accessible, and less costly.

If the trial goes well, Young says it could become a popular option for obesity treatment, in addition to controlling type 2 diabetes.

Patients also receive medical nutrition therapy while enrolled in the study. “We assume their entire diabetes care—if medications need to be changed, we’ll take care of that, and work with the patient’s primary-care provider to make sure they’re in good shape,” Young says.

Whether patients remain on medication during the trial depends on how their bodies react. “If they start losing weight and their blood sugars look great, the hope and the goal is to get them off some of the medication they are on,” she says.

The EndoBarrier is removed after 12 months. Young and her team will continue to monitor patients to see how their bodies react in the months following the removal.  Studies conducted in other countries have found that even after the device is removed, it may continue to have a “legacy effect” on glycemic control.

“We’re still very early on in the study, so it’s hard to know what will ultimately happen,” Young says. “It’s possible the device could be taken out for some period of time, and then put back in for a certain period of time. There are a lot of potential variations for this.”

Laura Young is a physician and researcher in the Division of Endocrinology and Metabolism at the UNC School of Medicine.