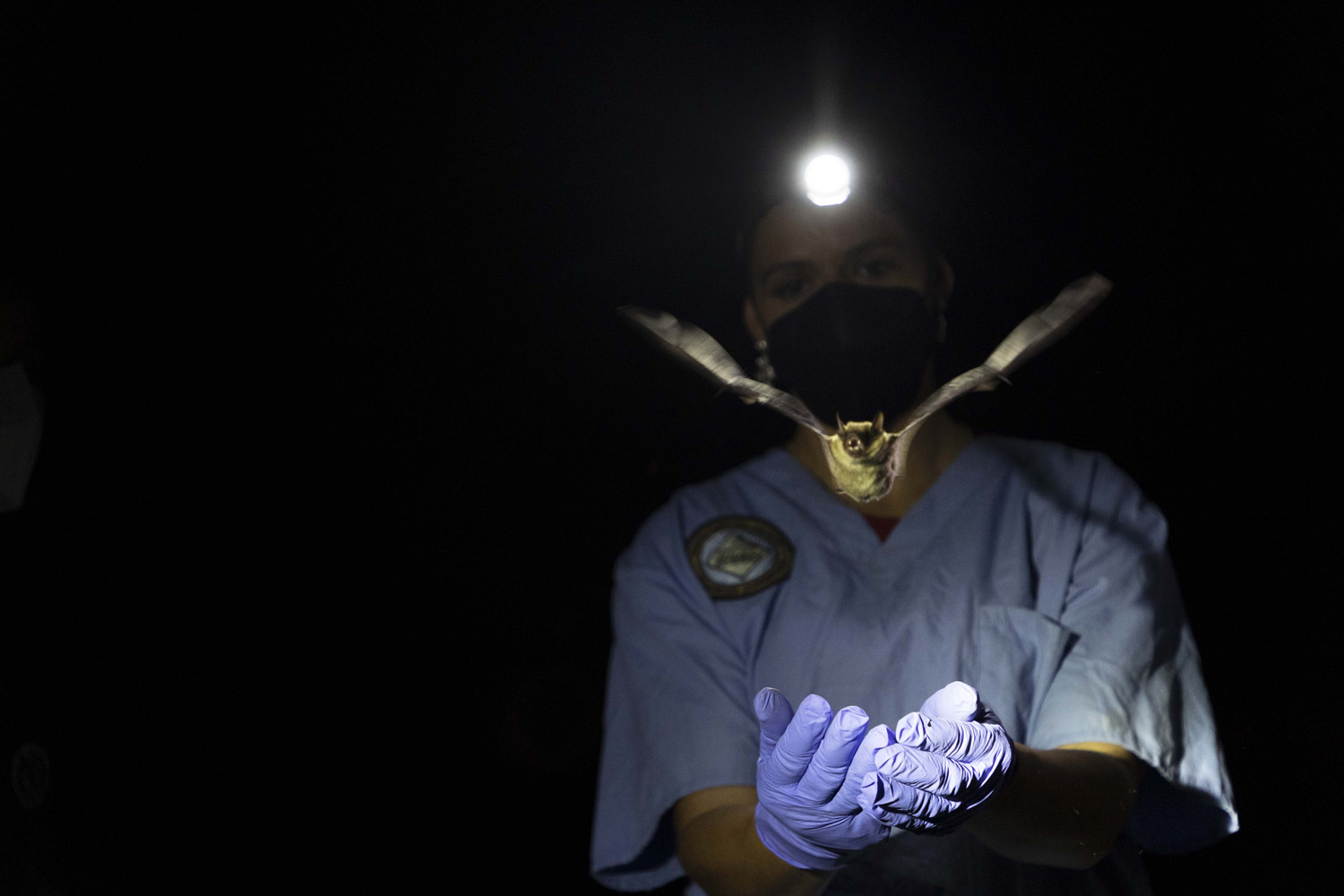 Rada Petric releases a big brown bat, commonly called a “house bat,” during a population sampling at the Eno River in Durham in July 2022. (photo by Alyssa LaFaro)
By Alyssa LaFaro
Earth

As the last remnants of the sun streak the sky with purple and peach hues on this hot summer night, the trees by the Eno River fall silent. It’s one of those Carolina evenings that’s so humid, it’s as if the water in the air has soundproofed the woods. The sweat is everywhere, and the mosquitoes are out in full force.

“Is everyone ready to see some bats?” Rada Petric asks.

As she leads a gaggle of summer camp kids along the rocky path by the Eno, she begins to list a series of facts about Mother Nature’s only free-flying mammals. Bats have barely changed since they first appeared 50 million years ago. They typically only birth one pup a year — unless they are red bats, which can have four. Some can fly at 100 miles per hour. Others eat scorpions. And they traverse the same path each night, which makes them incredibly easy to catch.

Petric pauses and points to a barely visible structure crossing the path in front of them.

“Be mindful of the net,” she says and lifts it up for the students to duck under.

She leads the students further down the path toward a sampling table, where they’ll bring the bats they catch to measure their body size and wingspan, identify their sex and age, and check them for diseases. After about 10 minutes, Petric takes them back to the net.

“We got one!” Petric shrieks with joy and points to a small, brown pile on the net that looks more like a leaf than a living, breathing animal. 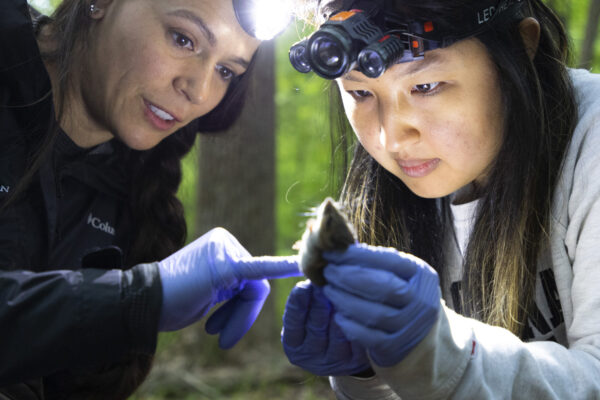 Petric teaches former UNC student Vy Pham how to identify the sex of a mouse. (photo by Alyssa LaFaro)

Petric has studied bats since her undergraduate days at UNC-Greensboro and has made it her mission to educate as many people as possible — from middle-school students, to undergraduates, to fellow researchers — about these winged critters.

Now a UNC-Chapel Hill biologist, Petric directs the UNC Institute for the Environment’s Highlands Field Site, located in the town of Highlands in the Blue Ridge Mountains. The semester-long experience is basically a zero-to-one-hundred crash course on the scientific method and teaches participants how to conduct field and lab work, analyze data, work with statistical research software, perform a literature search, and produce a research paper.

“It’s a pretty rigorous program,” Petric says. “But once these students complete their projects, they’re ready for graduate school.”

As someone who stumbled into animal research, Petric recognizes that students don’t always have the opportunities like this.

“Honestly, I thought a scientist was someone in a white coat who spent most of their time in a laboratory mixing chemical compounds in beakers,” she says with a laugh.

When she was 13 years old, Petric relocated to Greensboro with her mother and two siblings after years of seeking refuge from the Yugoslav Wars. Still overseas, her father prepared to join them, but soon fell into a diabetic coma and passed away. Petric hadn’t seen him since she was 11.

Her father’s passing inspired her to pursue a pre-med track once she was ready to start college.

“He died of a totally preventable and treatable illness,” she says. “It was a terrible experience, but it made me want to provide medical help and assistance for people who needed it without the financial burden. I thought I would become a medical doctor and provide medical care in third-world countries where that might not be feasible.”

Upon learning that experience in a lab is required by most medical schools, Petric searched for one to join at UNC-Greensboro. The first to respond specialized in bats and mice.

Shortly after Petric joined the lab of biologist Matina Kalcounis-Rüppell, she traveled to National Military Park in Greensboro to conduct a small mammal survey to gauge the local population.

“It was a beautiful day,” Petric remembers. “We were just strolling through the forest and setting traps. It was lovely.”

Then, when checking one of the traps, the hispid cotton rat inside managed to escape — and Kalcounis-Rüppell lunged forward and grabbed it.

“It was amazing!” Petric says with a laugh. “I was like, How do you have a PhD and you’re literally hunting rats in the forest?” 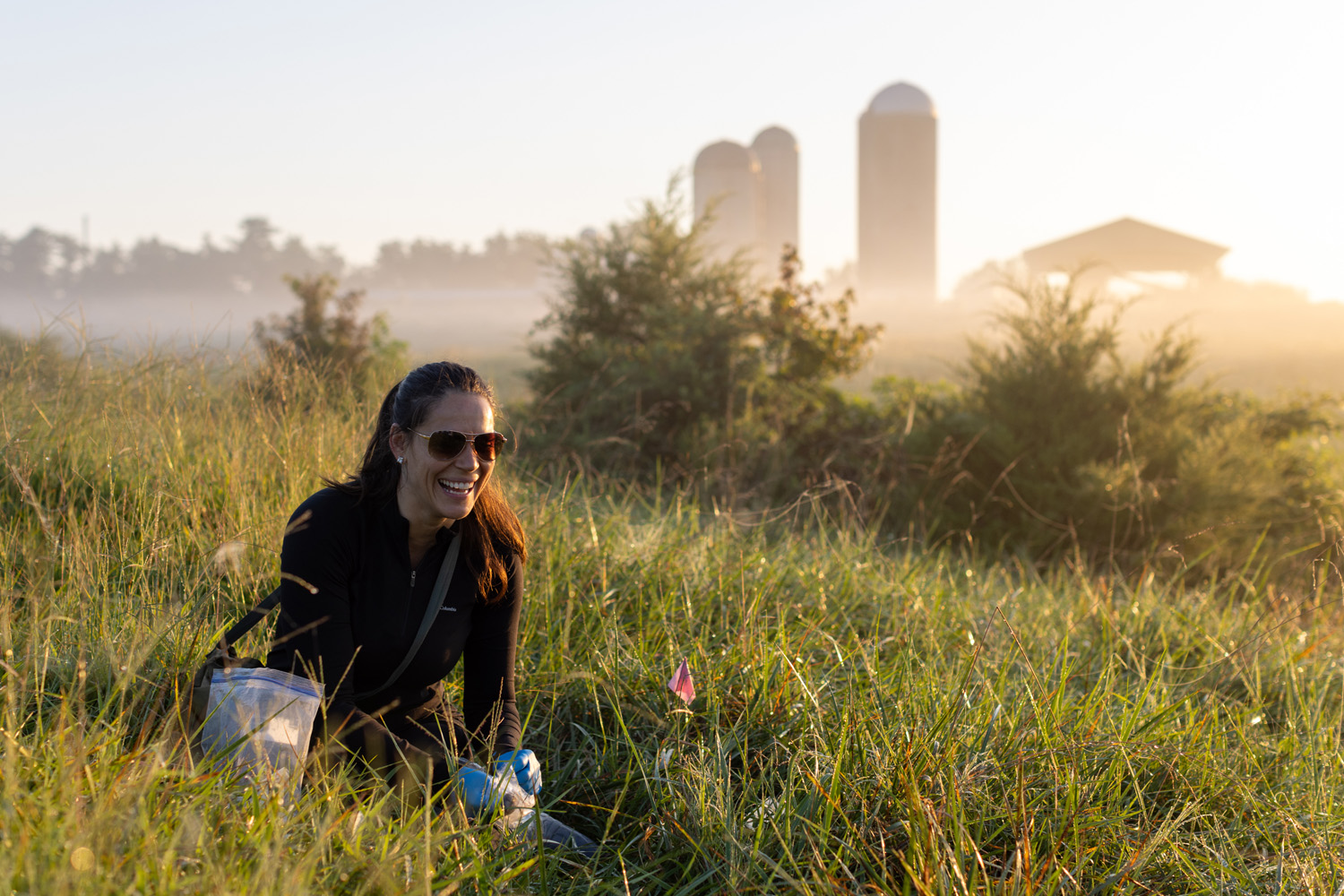 Today, Petric still experiences so much joy while working out in the field. (photo by Andrew Russell)

After that, Petric joined every biology lab she could. In one, she learned how to identify insects. In another, she researched medicinal plants. A third explored genetics.

But she kept reflecting on that first project on small mammals, so much that she left her pre-med track to pursue a master’s in biology and then a PhD in environmental health science under Kalcounis-Rüppell’s guidance.

During her time in the lab, Petric helped with various bat projects, including one in eastern North Carolina focused on identifying the species that reside there. This work involved catching, assessing, and releasing bats.

“The first time I actually held a bat with my own two hands was during the netting survey,” Petric shares. “I never quite realized how small and fragile they are — yet so full of life. I was in absolute awe.” 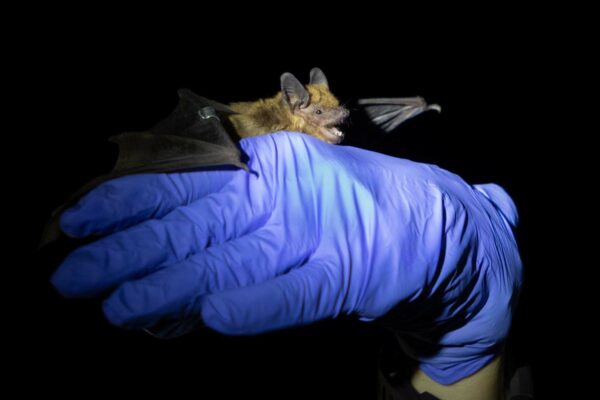 Petric holds a big brown bat, or a common “house bat,” while conducting a population survey at the Eno River in Durham. (photo by Andrew Russell)

Much of Petric’s own research focused on the vocalizations of monogamous Californian mice. This required her to travel from coast to coast, which became harder when her son was born in 2013. On the verge of burnout, she decided her research wasn’t dependent on any particular location or species; she just wanted to study how human noise affects animals. And then, in 2016, she received an email from a colleague about a grant to conduct research at the Highlands Biological Station.

She spent the next three years working in the North Carolina mountains and building relationships within the local science community. When the director position at the UNC Highlands Field Site — which is hosted at the Highlands Biological Station — opened up, a handful of colleagues reached out to Petric to encourage her to apply.

When you ask Petric if she has a favorite bat, her eyes light up.

“I have a profound love for hoary bats,” she says.

Once described as the “George Clooney” of the bat world, hoary bats have salt-and-pepper fur and incredibly large ears. Each year, they migrate thousands of miles and are the only land mammal to have naturally reached the Hawaiian Islands.

“They’re such tiny animals — about .9 ounces — yet so strong and tough,” Petric shares.

Hoary bats are just one of 17 species found in North Carolina — that’s the most bat species in one concentrated area east of Texas. And one reason why Petric has remained here.

The North Carolina mountains are home to more than 30 species of salamanders and nine species of shrews. That abundance can’t be found anywhere else. And while bats are Petric’s favorite mammal, she also studies other animals like shrews, mice, rats, reptiles, mollusks, and African lemurs to learn how humans affect animals and their behaviors. 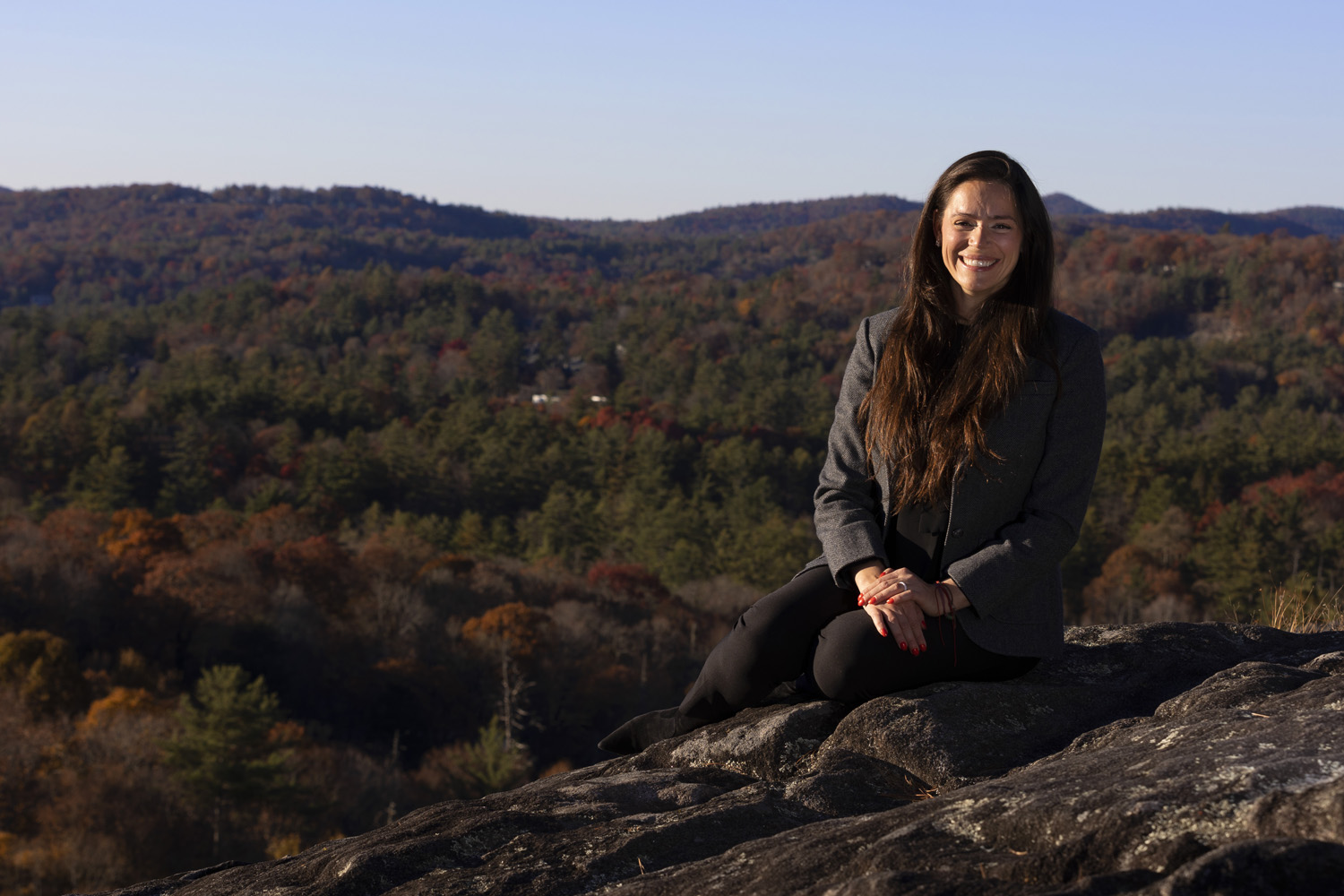 “We need baseline knowledge and understanding to figure out how to conserve and preserve landscapes and to prevent human practices from further impacting animals in a negative way,” she says.

One of her current projects involves surveying small mammals across a five-mile plot of land in Julian that’s undergoing wetland mitigation and rehabilitation — when landowners work to restore an ecosystem to the condition it was in before human intervention. She and her collaborators want to know how the restoration effort will impact the animals over time.

As for bats, she has four upcoming studies this summer.

The first is BatPak, a citizen science project that arms hikers with bat recorders to track species and activity patterns along the Southern Appalachian Trail throughout the year. Another will assess how human-made noise affects bats and insects. Early data suggest that some species are sensitive to all noise, while others only react to high frequencies, according to Petric.

For a different project, Petric hopes to uncover primary activity areas for northern long-eared bats in North Carolina. The federally threatened species faces extinction from white-nose syndrome — a deadly disease that leads to fungal growth on the noses and wings of cave-dwelling bats. To date, the disease has killed millions of bats in North America alone. As of November 29, 2022, northern long-eared bats are considered endangered under the Endangered Species Act.

“In some areas of this region, we’ve lost 90 percent of the bat population because of white-nose syndrome,” Petric says. “Right now, we don’t even know where northern long-ear bats are roosting, so putting trackers on them to find out where they are and what their activity patterns look like would be amazing.”

Petric’s final project will use drones to record in-flight social calls, something that hasn’t been done before. Biologists know little about the vocalizations bats make when flying. Previous studies suggest the calls vary among species and are used to claim food and defend foraging territories. More information on this behavior could uncover the dynamic social structure of these animals. 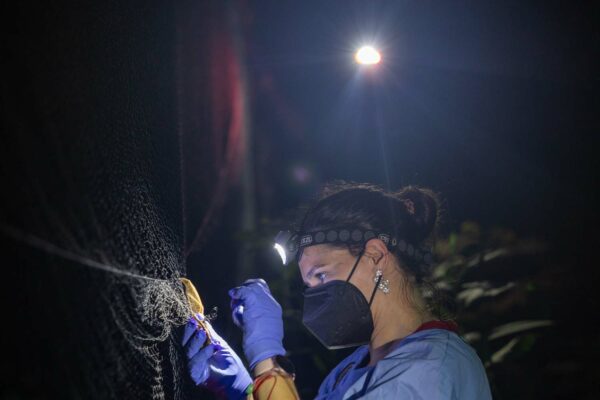 Petric removes a bat from a net at the Eno River. (photo by Andrew Russell)

Since getting her PhD, Petric has trained more than 80 students in field-based research. The opportunity to educate the next generation of scientists is what led her to take on the directorship at the Highlands Field Site in 2021.

“This is by far one of my favorite things about this job,” she says with a smile. “I love being able to take my experience with my mentors and apply them to the next generation.”

On top of overseeing the logistics of the field site, she teaches classes and provides one-on-one mentorship within the program. Last semester alone, she mentored nine of the 15 students. The others were paired with scientists from local agencies, universities, and the Highlands Biologic Station, where the program is hosted.

As part of the program, Petric takes students on hikes across the Blue Ridge, the Great Smoky mountains, and even into Tennessee and Georgia. She believes these experiences, combined with the opportunity to conduct field research, will guide students as they navigate their next steps.

“I want to help students learn what they’re interested in and what they’re not interested in, but also get them excited for something,” Petric says. “I want them to realize that they don’t have to make one decision — there’s a slew of possibilities for them.”

Rada Petric is the director of the Highlands Field Site and a research assistant professor at the UNC Institute for the Environment.

The bat research highlighted in this article was conducted under the Wildlife Resource Commission and the small mammal research under the Greensboro Science Center.