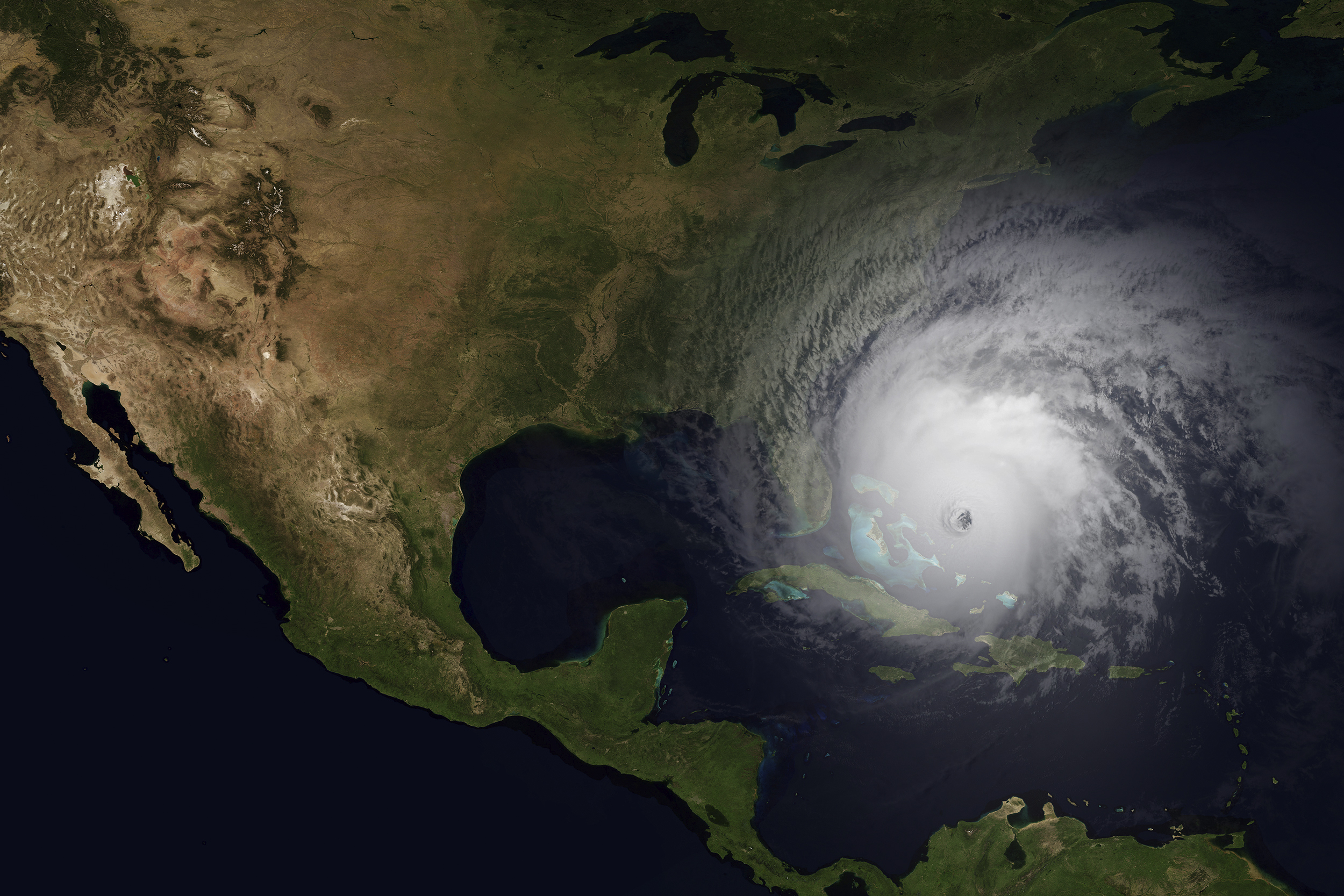 A hurricane that formed in the Atlantic basin heads for the eastern seaboard. (photo from Adobe Stock)
By Alyssa LaFaro
Earth

June 1 marked the start of the 2020 hurricane season — and it’s slated to be an active one. The National Oceanic and Atmospheric Administration (NOAA) predicts the season will bring as many as 19 named storms — up to 10 of which could become hurricanes. The season has barely begun, and there have already been three named tropical storms. Cristobal made landfall on June 3 and was the earliest third storm of any hurricane season in more than 100 years.

Researchers at the University of North Carolina at Chapel Hill monitor these storms and provide coastal storm surge and flood forecasts using the ADCIRC Prediction System, computer models that provide predictions of coastal flooding, winds, and storm surge. The data, updated every six hours, helps organizations like the U.S. Coast Guard, U.S. Army Corps of Engineers, Federal Emergency Management Agency, and state and local emergency management teams make decisions about response actions, evacuations, supply locations, and personnel deployment. These activities may be particularly crucial this year, as NOAA predicts above-average natural hazards for the season, including the potential for three to six major hurricanes that could reach categories 3, 4, or 5, and have winds of 111 miles per hour or higher. 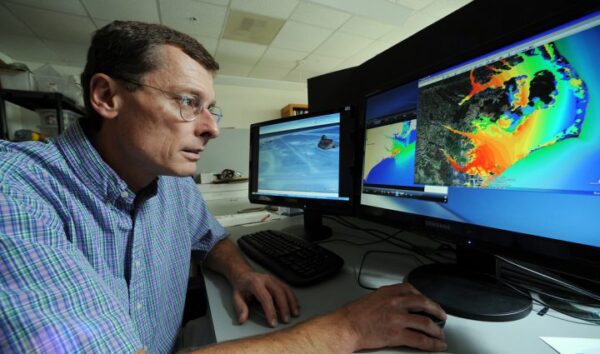 The ADCIRC Prediction System was co-created by Rick Luettich, director of the UNC Institute of Marine Sciences and lead  principal investigator of the Coastal Resilience Center of Excellence. Luettich has spent nearly three decades working with a dedicated team to improve ADCIRC’s ability to predict storm surge and flooding associated with strong coastal storms. We spoke with Luettich about this year’s above-average hurricane forecast, the impact these storms have on inland populations, and how COVID-19 may affect vulnerable communities.

Endeavors: Why is the 2020 hurricane season slated to be so active?
Rick Luettich: Ocean surface temperatures are above normal in both the Gulf of Mexico and the main hurricane generation region between the west coast of Africa and the Caribbean Sea. In addition, we are expecting a neutral to negative El Niño season this summer and fall. Wind shear created by positive El Niño conditions — unusually warm ocean temperatures in the equatorial Pacific that affects weather around the globe — can prevent tropical cyclones from forming in the Atlantic. Neutral or negative El Niño conditions create less wind shear to break up these storms. The combination of reduced wind shear and warmer surface temperatures increases the likelihood of tropical cyclones developing this year in the Atlantic Ocean.

E: How is the increased intensity of this hurricane season related to climate change?
RL: Hurricanes draw their energy from the warmth of ocean waters. Climate change has caused ocean waters to warm, thereby providing more energy to fuel stronger storms, a longer time period during which ocean temperatures are favorable for storm formation —hurricanes now form before and after the “official” season each year — and a geographical region stretching farther north that hurricanes are able to form in. Climate change has also increased air temperatures, making the atmosphere able to carry more water, increasing the rainfall potential associated with hurricanes.

Most climate models project hurricanes to be stronger in the future, and recently published studies of hurricane strength derived from satellite data indicate that hurricanes have been increasing in strength over the past several decades.

E: Why should people in central North Carolina be concerned about increasing storms and their intensity?
RL: Hurricanes can cross the shoreline and cause considerable damage inland before they dissipate. A few examples of hurricanes having significant impacts in central North Carolina include Hazel (1954) — which caused damage as far inland as southern Canada — Hugo (1989), Fran (1996), Floyd (1999), Matthew (2016), and Florence (2018).

The stronger the hurricane is as it approaches shore, the stronger it will likely be as it moves inland and, thus, the more wind damage is likely to occur along its path. Also, the greater the storm’s water content, the more potential there is for substantial rainfall over inland areas. The threat from hurricanes is not limited to just the coast — stronger and wetter storms at the coast are likely to be stronger and wetter storms as they move inland.

E: Hurricanes impact other parts of the United States. What issues should people who don’t live along the eastern seaboard care about?
RL: In the U.S., the most expensive natural disasters have been due to hurricanes. The federal government has borne much of the cost of recovering from these disasters, and that cost is spread out to all American citizens. Furthermore, the loss of life and the significant disruption to life associated with these disasters affects families across the country. That’s why people throughout the entire nation should be concerned about the increased potential and severity of these storms in the future.

E: How will COVID-19 protocols affect disaster preparedness plans?
RL: I expect that fears of COVID-19 will greatly impact disaster preparedness plans — due to the need to accommodate social distancing on the one hand and high density congregation in shelters or other facilities in response to a major coastal weather event on the other. There is also the possibility that fear of COVID-19 might curtail neighbors helping neighbors in the aftermath of a storm. We continue to try to provide the best available information on storm surge and flooding from ADCIRC for each major coastal event so that it can be used in all planning activities.