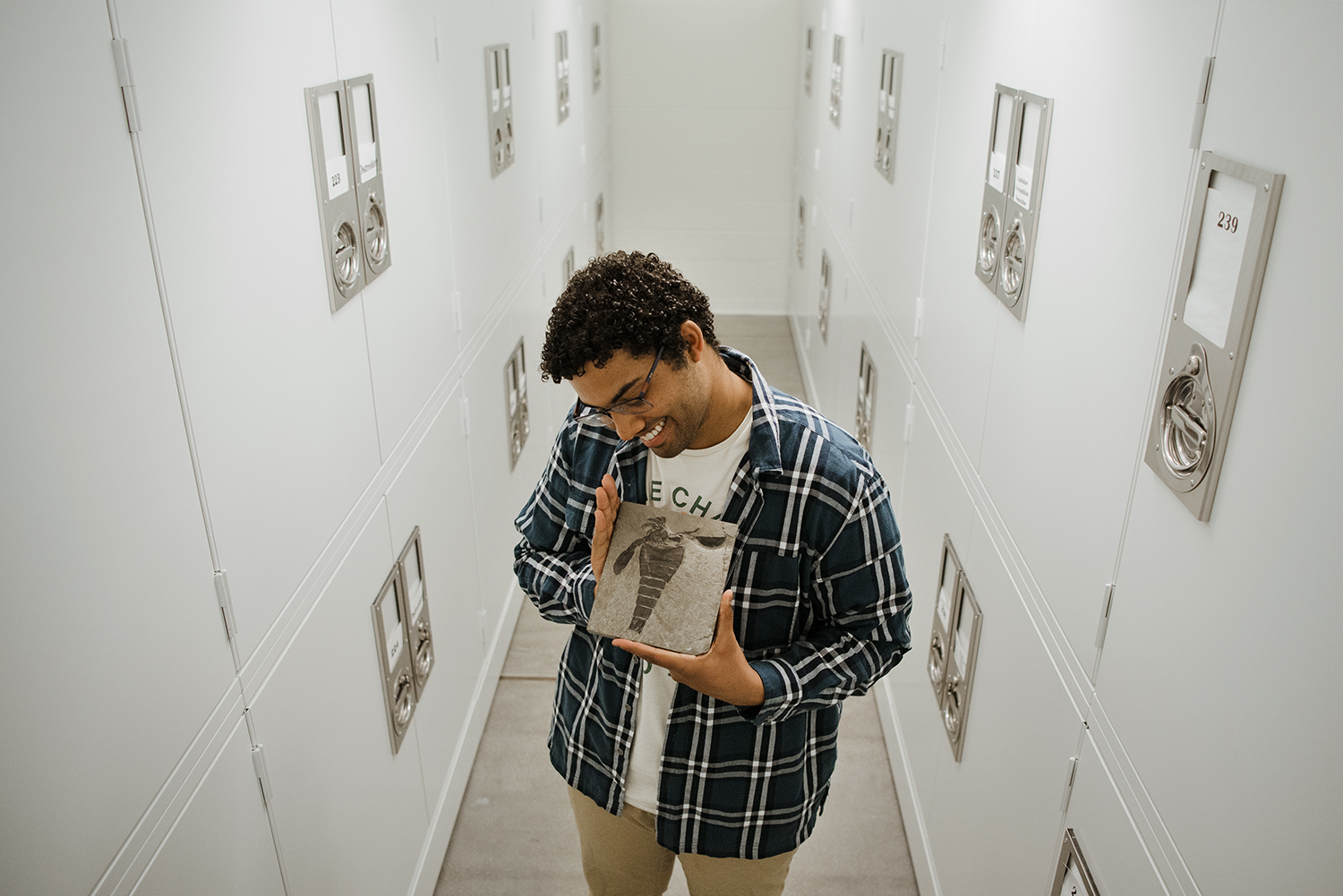 Jared Richards sends a string of letters through our Zoom chat: Aegirocassis. It’s a long-extinct oceanic animal. He starts describing it before Google can provide a picture.

“They look like aliens,” Richards says. “I love this animal. It’s awesome.”

It’s almost more believable that this creature comes from space than that it swam in Earth’s oceans millions of years ago. It looks nothing like any current-day animal. It had a long, segmented body, an eye on either side of its head, body flaps to propel it through the water, and filter-feeding appendages similar to the baleen of modern whales. It could be up to six feet long. There is a particularly well-known green-hued picture from National Geographic that Richards notes as he describes it.

“You have a fossil that’s a foot long of what most people would consider a bug,” Richards says with a laugh. “It’s crazy.”

Now a graduate student at Harvard University, Richards gets to interact with fossils like that on a daily basis — a childhood passion propelled by his undergraduate experiences at UNC-Chapel Hill. At Harvard’s Museum of Comparative Zoology, he studies fossils of ancient invertebrates, including echinoderms like starfish, arthropods like horseshoe crabs, and other animal groups that lack a backbone.

“I guess I don’t acknowledge it enough,” Richards says, “but I go down there, and I look at almost 500-million-year-old echinoderms.”

A passion for paleontology

Richards has always been interested in zoology and evolutionary biology.

“When I was younger, I was big into dinosaurs,” Richards says. “A lot of us go through that phase, but I was really into paleontology, and it never really went away.”

“That program was critical throughout my entire journey at UNC, whether it was just support in the academic setting or helping me figure out the next big thing to do, like figuring out what programs I wanted to apply to.”

One of his first research experiences was studying coral in UNC marine sciences professor Karl Castillo’s lab the summer after his freshman year in 2017. The lab helped him discover an appreciation for ecology, and he wrote his senior honors thesis on this research.

“That was one of my first experiences doing real research, coming up with hypotheses, testing them, and doing data analysis and visualization. That taught me that research was something I thought was awesome,” Richards says.

CSS helped Richards find research experiences the following two summers. First, Richards worked at the Smithsonian Institution, cataloging over 400 cephalopods — like cuttlefish, squid, and octopods — caught more than two miles below the sea surface during a 2009 research expedition at the Atlantic Ocean’s Charlie-Gibbs Fracture Zone. He also employed computer science techniques to analyze cephalopod ecology in the region based on the samples the researchers brought back. 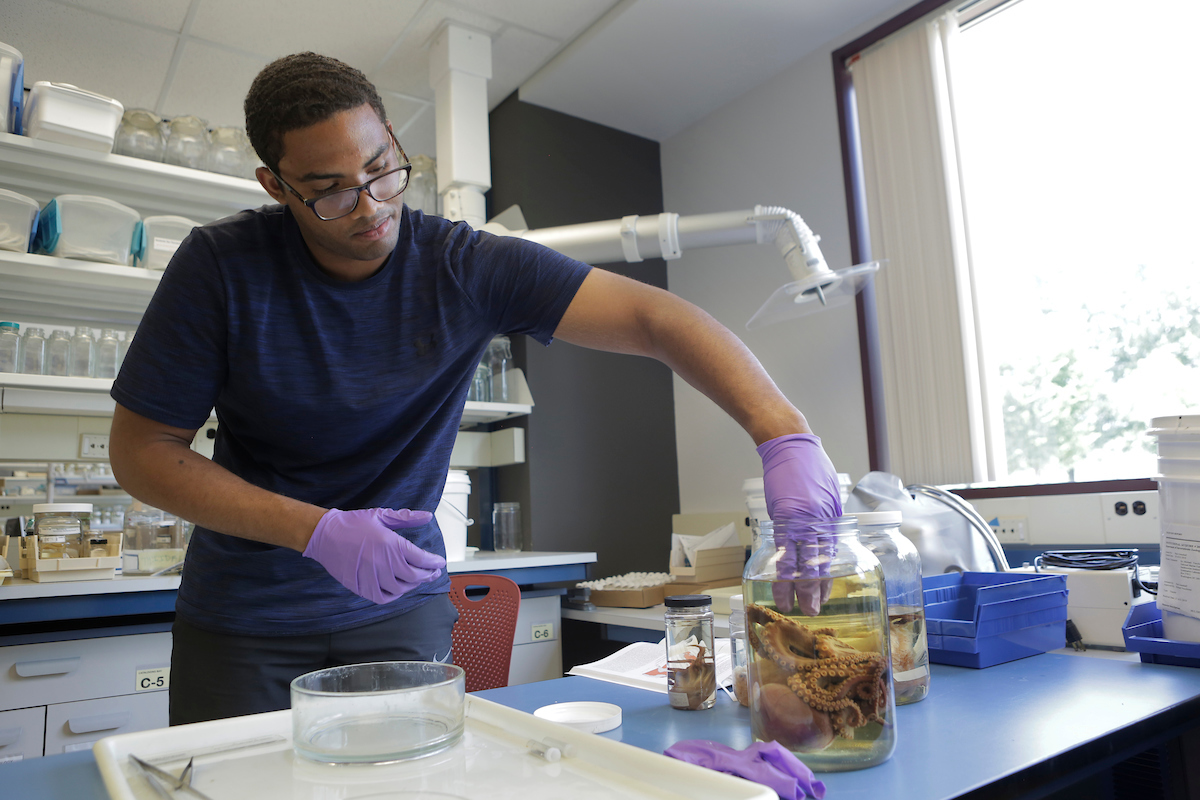 When he was a junior at UNC, Richards completed an internship at the Smithsonian Institution. Here, he removes an octopus from a jar to verify the species’ identification. (photo by Megan May)

This experience reaffirmed that Richards wanted to work with organisms and in evolutionary biology. The summer before his senior year, everything clicked as he worked in Integrative Biology at the University of California at Berkely (UC Berkeley), researching evolutionary biology with a focus on paleontology.

“In my senior year, I decided not only was I going to apply to go off to grad school and study zoology and evolutionary biology at some point, but I wanted to basically reignite my interest in paleontology.”

The professor Richards worked with at UC Berkeley, Seth Finnegan, suggested he check out an up-and-coming researcher at Harvard University who was working in invertebrate paleobiology. CSS helped him apply for graduate school, and in the fall of 2020, he found himself heading to Cambridge to attend Harvard.

Richards studies invertebrate paleontology and paleoecology in Javier Ortega-Hernández’s lab at Harvard’s Museum of Comparative Zoology. Almost every week, he goes to the museum’s collection space and catalogues fossil specimens collected in the field. Some are recognizable and look like starfish, similar in size and shape to what we see today. Others are six-foot wonders that seem nothing like any creature we’re familiar with.

“This is the first time I’m working with real fossils. It really highlights how awesome invertebrates are,” Richards says. “There’s a massive world that we commonly don’t pay attention to. The vast majority of animals today, and in the past, are invertebrates.”

The conditions have to be just right for any fossils to form, even if an organism does have bones. But for soft-bodied invertebrates, fossils are even rarer. There are “sites of exceptional preservation” where paleontologists can find many invertebrate fossils. Richards studies fossils from such a site in Morocco called the Fezouata biota. Though it is currently located near the equator, it was in the polar regions during the early Ordovician period, a highly diverse time roughly 485 million years ago.

The Ordovician followed the Cambrian explosion, which is when most modern animal phyla — including sponges, mollusks, cnidarians, and arthropods — started appearing. The Ordovician is defined by the establishment of modern, marine ecological structure, rapid diversification, and a rise in the number of animal species on Earth. Richards explains the developments in this period shaped the organisms and biosphere of today.

The Fezouata is one of the most well-preserved sites of Ordovician faunas and includes of plethora of new species. The Ortega-Hernández Lab makes trips to Morocco to gather specimens to study.

Richards uses quantitative ecological methods to compare the community structure of the Fezouata to other sites with organisms from different periods — a process that lets Richards go beyond qualitative observation.

Richards also studies a specific type of organism called a lobopodian — a precursor to modern arthropods, like insects, arachnids, and crustaceans — which has a worm-like body and many legs. There are a few dozen known species of lobopodians, and many are only centimeters long. Richards strives to integrate new species found in the Fezouata into our understanding of animal evolution.

He thinks they’re fascinating, and he’s glad that, as a graduate student, he can spend most of his time focused on the research he cares about.

“Today, I’m going to be making figures about those lobopodians to show why they are so special: They come from a crucial time period,” Richards says. “I have never enjoyed academics as much as I do now.”

Richards has four years left in his program at Harvard. He’s still exploring what he wants to do after and is open to other fields like data science, but he can’t see anything replacing his love for paleontology. Harvard has many opportunities for funding and experience to help Richards continue to do what he’s passionate about, but he’ll always remember the opportunities UNC provided him.

“I could not be where I am today without the great people in the UNC CSS program,” Richards says.

Jared Richards is a graduate student in Department of Organismic and Evolutionary Biology and works within the Ortega-Hernández Lab for Invertebrate Paleobiology at Harvard University.