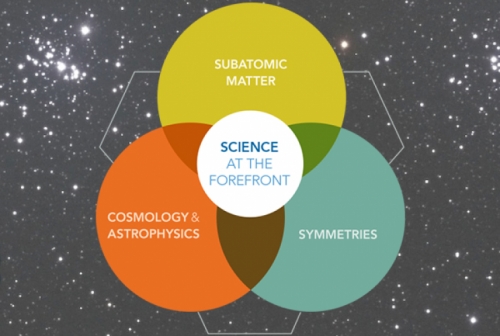 Photo courtesy of the CoSMS Institute
The CoSMS Institute will bring together scientists interested in the topics of cosmology and astrophysics, subatomic matter, and fundamental symmetries.
By Alyssa LaFaro
Earth

What is the origin of the elements? Are neutrinos their own antiparticles? What is dark energy and how does it help the universe expand?

These types of inquiries, called “grand challenge physics questions,” are just a few of many that scientists hope to answer. But, as physics professor John Wilkerson points out, these discoveries will only lead to more questions down the road. That’s why he proposed the idea for UNC-Chapel Hill’s Institute for Cosmology, Subatomic Matter & Symmetries (CoSMS Institute), in partnership with North Carolina State University, Duke University, and Oak Ridge National Laboratory.

“There’s a tendency in science to get into silos,” Wilkerson, the institute’s director, says. “You get involved in your own research area and become very focused on that research. You don’t really talk to people in other fields, and you become highly specialized in your own. But there’s a lot of overlap in these interesting, fundamental physics questions. We want to get different groups of people talking — from theorists to experimentalists to computational scientists.”

Wilkerson, with the help of Department of Physics & Astronomy Chair Chris Clemens, plans to do this through workshops, hosting distinguished visitors, and providing fellowships to graduate students and postdoctoral fellows. The CoSMS Institute officially launched this past May with a retreat featuring more than 40 faculty from the above mentioned collaborators, as well as North Carolina Central University.

“At the retreat, we asked people to get back into their silos to discuss the big questions in their fields,” Wilkerson says. The groups broke into respective specialties: gravity and cosmology, astrophysics, astronomy, nuclear physics, and particle physics. Each one placed its big questions onto white boards, which, when put together, showed one obvious thing: overlap.

Since the retreat, Wilkerson and Clemens have solicited proposals for future workshops from the institute’s partners and received an array of ideas. “We have a chance to be the center for fundamental nuclear physics research in RTP with these three major universities,” Clemens says. “We would draw the best minds in physics to come visit for these workshops. And we want them to think of this place as a hub for fundamental physics.”

In 1955, a wealthy North Carolinian industrialist named Agnew H. Bahnson, Jr. harnessed his passion for gravitational physics by creating the Bahnson Institute of Field Physics (IOFP) at UNC-Chapel Hill. He recruited two world-famous gravity theorists, husband-and-wife team Bryce and Cécile DeWitt, to run the institute. And a few years later, in 1957, played host to the first-ever Conference on the Role of Gravitation in Physics, better known as the Chapel Hill Conference.

“We were the center of activity in general relativity,” Clemens says. But upon Bahnson’s death in 1964, his estate established a professorship. Bryce was promoted to professor; Cecile was made a lecturer. In 1971, the two left Chapel Hill and ended up leading the Center for Relativity at the University of Texas at Austin.

The institute lost its most prestigious members — and Chapel Hill was no longer the center of gravity.

Until now. “It makes so much sense to reboot the Institute for Field Physics, but broaden it out into an effort that includes all of the fundamental research going on — not just gravity but nuclear physics,” Clemens says. This effort, Clemens feels, is a continuation of Bahnson’s IOFP and something the department should have been doing all along. For Wilkerson, it’s the new inter-institutional way to pursue neutrino physics and these other topics.

Where science and passion prevail

Wilkerson has spent the past 30 years researching neutrinos — subatomic particles thousands of times lighter than electrons. These particles are so tiny that they seamlessly penetrate most matter, including humans, and so numerous that their combined weight would be heavier than all the stars in the universe. And Wilkerson was recently part of a research team that discovered these particles have mass — the lead scientist of which, Arthur McDonald, just won the 2015 Nobel Prize for Physics.

Although plans for the institute remain in the early stages, one thing’s for certain: passion and a purpose drive it. “One of the questions that’s often asked when doing fundamental science is: What is the benefit of this?” Wilkerson says. “The nature of humankind is to wonder how the world works and how nature works. The most direct benefit is that we are training the next generation of citizens and scientists to compete in a technologically global economy.”

Clemens envisions the institute’s future as an interactive space — a physical building with large open rooms and chalkboard-filled walls. A place “where you walk by people working and can’t help but jump in,” Clemens says. “We have to come at the CoSMS Institute with passion for the enterprise and then go light that fire in other people who are part of it, so their collective desire to do this spontaneously erupts into activity.”

John Wilkerson is the John R. and Louise S. Parker Distinguished Profess of Physics. His research is funded by the National Science Foundation and the Department of Energy.

Chris Clemens is a professor and chair of the Department of Physics and Astronomy at UNC-Chapel Hill.