As Mark Ciesielski urges the black Silverado he’s driving up the incline of the third bridge he’s crossed this morning, he looks out over the rippling water of Core Sound and admits that the ocean intimidates him.

“Not knowing what’s around you is terrifying,” the UNC-Chapel Hill marine science PhD candidate says with a laugh.

That’s a pattern of Ciesielski’s — immersion therapy. He also shares that he’s not much of a swimmer, but he received a full scholarship to his undergraduate institution as a member of the dive team.

“Diving and swimming are two different things,” he points out.

Later that morning, it’s hard not to admire his drive to get in and out of the waist-high water at his field site, where numerous mesh cages full of oysters bob up and down as the saltwater swells and recedes.

“Do you know about the stingray shuffle?” he asks.

It’s exactly what it sounds like. Small versions of these shark relatives like to bury themselves in the sand on the bottom of the bay here in Smyrna, North Carolina. To avoid stepping on them, a quick one-two is necessary.

Upon reaching the oyster cages, Ciesielski unhooks one from the line, lifts it up, and shakes the water out of it, the shells click-clacking loudly. He carries it back to the boat, cuts open its zip ties, pours the contents into a long black tub, and begins sorting. Dead oysters to the left, live oysters the right. An open shell signifies mortality. This batch only has six or seven that didn’t survive. 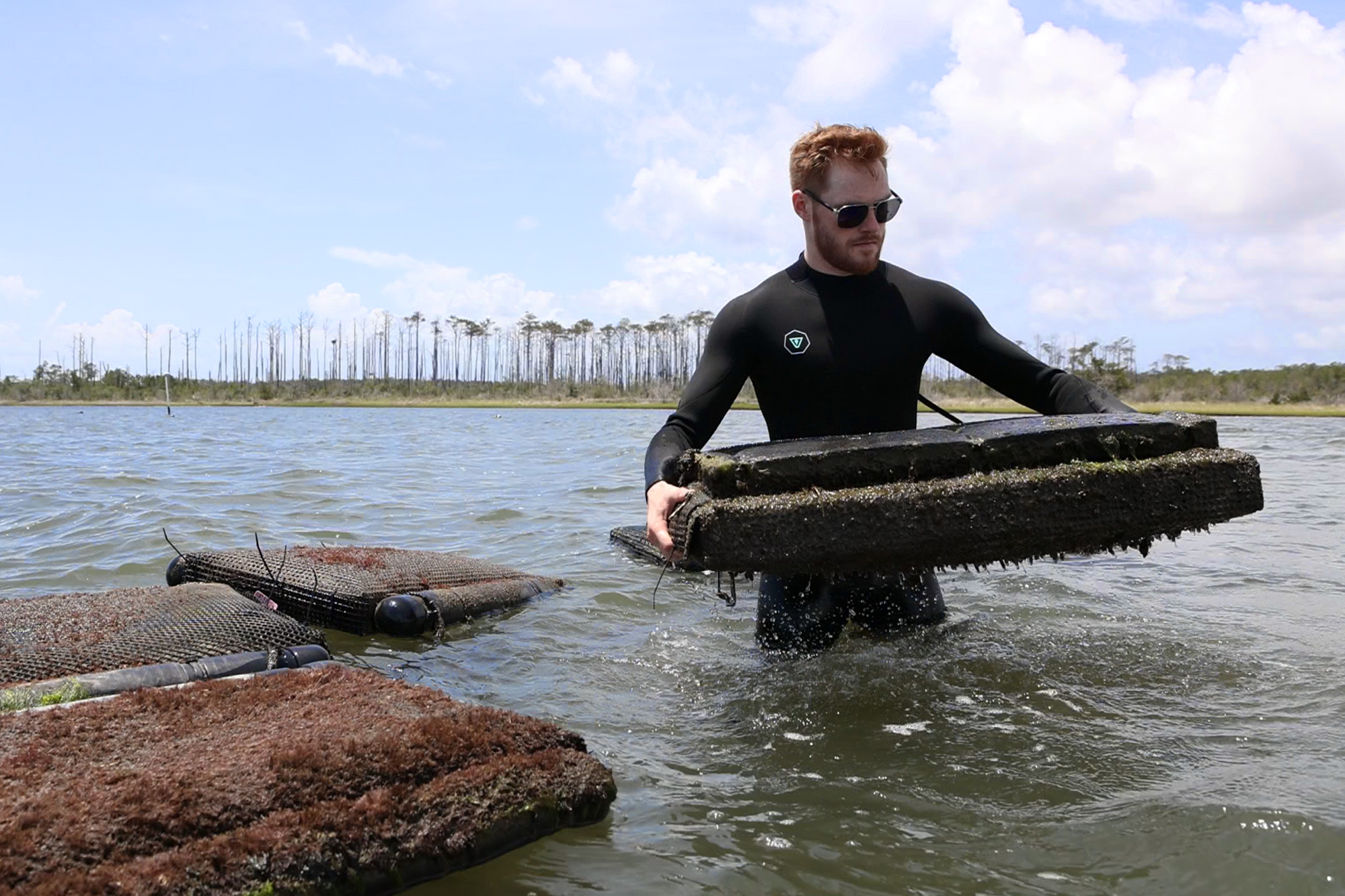 Ciesielski shakes water out of an oyster container. (photo by Alyssa LaFaro)

“What’s your count?” Ciesielski yells to the front of the boat, where his NC State collaborator and IMS alumnus, Jonathan Lucas, is divvying up another bag.

“Did you just say 76?” Ciesielski says, a note of shock and sadness in his voice.

Since 2003, the North Carolina oyster community has worked together to protect and restore local oyster habitats and fisheries, which have experienced a steady decline over the last century due to overharvesting, habitat disturbance, pollution, and biological and environmental stressors. To uncover what’s contributing to these die-offs, Ciesielski is exploring the driving factors that may be leading to the bivalves’ demise.

“It’s not one silver bullet,” he says. “Most likely, it’s a whole suite of factors that need to be taken into account.”

Ciesielski is part of a team that’s attacking this problem of oyster mortality from a variety of angles, assessing water quality, increased temperatures, predation, and other environmental factors. He’s specifically focusing on a genus of bacteria that could be infecting these pear-shaped mollusks, something called vibrio.

If you’ve ever heard of vibrio, it’s probably the kind that affects humans. The “heavy-hitters,” according to Ciesielski, are Vibrio parahaemolyticus and vulnificus. If someone consumes oysters containing these bacteria, they might experience an intestinal infection, which can lead to septicemia and possibly death.

But these are just a few of the bacteria that make up the genus. Numerous benign species live in the ocean, just “hanging out,” not affecting humans. But they might be impacting the oysters.

“There’s a whole slew of functions that the vibrio genus performs, and some of them are likely contributing to oyster mortality,” Ciesielski says. “So, we want to know which species are causing most of the damage.”

After counting oysters in the field, Ciesielski collects two from each container and brings them back to the lab, where he dissects them to gather a variety of tissue samples for analysis. This is a meticulous process that involves precise cuts, tiny vials, and the continuous disinfection of tools between samples. Once they’ve been sorted, the tissues are stained and viewed under microscopes to assess their immunological function.

Additionally, Ciesielski extracts DNA from the oysters and analyzes it using “large machinery that looks complicated,” he says with a laugh.

Ciesielski is monitoring oysters across eight field sites, six in North Carolina and two in Virginia. This allows him to identify the site-specific variables at play so he can develop strategies that help bolster the resilience of the aquaculture industry. He hopes that, in time, there will be a direct pipeline between scientists and oyster farmers so that he can let them know when there’s problematic bacteria within the system and, hopefully, limit the prevalence of widescale mortality events.

Partnering with the community

A huge goal of this work is not only to restore the oyster population itself, but the relationship between local scientists and oyster farmers. With this work, Ciesielski hopes that his research can be used to protect the oyster farmers and preserve their livelihoods. 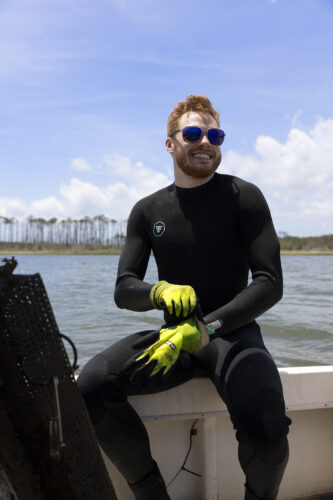 Ciesielski prepares to check oysters at a local farm. (photo by Alyssa LaFaro)

Oysters are a big deal in North Carolina. Not only are they a seafood product, but oyster reefs support the production of crabs and finfish — about $62 million-worth, according to the North Carolina Coastal Federation. In 2019, the shellfish industry brought in $27 million and supported 532 jobs across the state.

Additionally, one oyster filters about 50 gallons of water per day, making their survival crucial for nutrient cycling within the oceans, which promotes ecosystem health. Their removal of nitrogen, in particular, is vital — too much can create toxic aerosols and the growth of algae, which blocks out the sun and kills underwater plants and fish. Reefs also act as natural barriers against waves, reducing coastal erosion.

Part of the draw of working at IMS for Ciesielski is its reputation for partnering with members of the local community. Those relationships provide a rare opportunity, according to Ciesielski.

“Being able to work directly with the stakeholders and tell them that the work that we’re doing is to help them — that’s a really big deal for me,” he says. “I love what I do on the laboratory side of things, but I also want to make sure that it has worth. So connecting with them has been a big part of what I love about this research.

“Previous students have started this work, and I’m carrying it on,” he says proudly. “That’s a great part of IMS. There’s a legacy associated with it, and the work is always building on itself.”

Mark Ciesielski is a PhD candidate in the Department of Earth, Marine, and Environmental Sciences within the UNC College of Arts & Sciences. He is a member of the Noble Lab within the Institute of Marine Sciences.

This research is supported by the N.C. Collaboratory and N.C. Sea Grant.