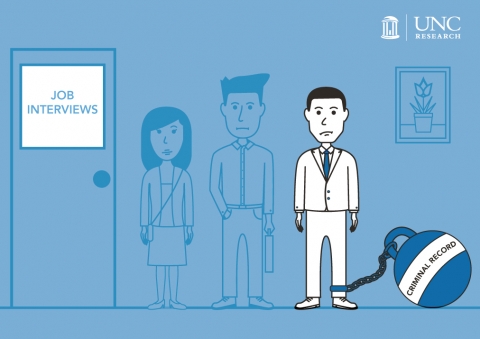 Illustration by Corina Cudebec
New tools developed by researchers at the UNC School of Government shed light on the wide range of consequences that can accompany a criminal conviction.
By Mary Lide Parker
Society

When Daryl Atkinson walked out of prison on Nov. 4, 1999, he was ready to start his new life. After three- and- a- half years in prison, including a stint of solitary confinement, he knew he wanted to become a lawyer. Even though his sentence was behind him, Atkinson quickly discovered that the consequences of his criminal record were not. His driver license was suspended. He couldn’t apply for federal financial aid. His college applications were rejected. To this day, despite years of award-winning work—including being honored by the White House—Atkinson cannot vote in his home state of Alabama.

“With a lot of criminal cases, people are pretty good at understanding the direct criminal punishment,” John Rubin, a criminal conviction expert at the UNC School of Government, says. “You’re looking at a misdemeanor or a felony, jail time, probation, fines—but what is not well-known are the consequences that remain after the criminal punishment.”

Despite tremendous hurdles after his release from prison, Atkinson accomplished his goal—he is now the senior staff attorney at the Southern Coalition for Social Justice, and a zealous advocate for giving people with criminal records a second chance. “To really improve the criminal justice system as a whole, we need a tool that gives people the full ramifications of contact with the system,” he says.

In collaboration with Rubin and the UNC School of Government, Atkinson has worked tirelessly on making that tool a reality.

Lifting the veil on “invisible punishments”

For anyone convicted of a crime, the first and foremost concern is the sentence—how much time will you spend incarcerated? That is the direct consequence of a crime. But collateral consequences or “invisible punishments” reach far beyond time spent behind bars.  Atkinson ended up enrolling in a junior college where he maintained a 4.0 GPA and graduated summa cum laude. But when he applied to a flagship state university in South Carolina, he was denied admission. “They didn’t tell me it was because of my criminal record,” he says. “But why else would you deny a 4.0 student? I had the feeling that no matter how well I did, I would always be judged by my past.”

The tool that he and Rubin have developed aims to shed light on these types of invisible punishments. C-CAT, or the Collateral Consequences Assessment Tool, is an online, searchable database of the consequences of a criminal conviction.

While it cannot provide legal guidance for specific cases, C-CAT helps attorneys and other legal professionals advise people more accurately and completely about the long-term consequences of a conviction. An individual can search by crime characteristic such as “misdemeanor” or “substance abuse.” The database also defines common—but sometimes confusing— terms like “crime of moral turpitude” or “deferred prosecution.”

Here’s an example: A young man has been arrested for giving a small amount of marijuana to a friend. Being convicted of sale or delivery of marijuana carries a greater criminal punishment than a conviction of possession. So the defense may go for a plea bargain—drop the charge down from sale to simple possession. But what are the consequences of a possession charge? “Even though the plea bargain looks good from a criminal standpoint it may set the person up to fail later,” Rubin says. That’s where C-CAT comes in, allowing attorneys to identify and inform clients of the potential consequences of a conviction.

The design of C-CAT has inspired similar initiatives on a national level. In 2013, the American Bar Association created a National Inventory of the Collateral Consequences of Conviction, which is modeled, in part, after C-CAT.

Getting a conviction expunged

A discussion about problems associated with a criminal record typically includes this question: “Can you get it expunged?” An expunction, also called an “expungement,”, is defined as the destruction of a criminal record. In North Carolina, it restores the individual, in the eyes of the law, to the status he or she occupied before the criminal record existed. While the idea of an expunction is simple, the process of being granted one is anything but.

“There are lots of expunction statutes and they are really complicated,” Rubin says.

If a minor is convicted of shoplifting, for example, his or her criminal record may be eligible for expungement. “The statute states that if the person is under the age of 18, and doesn’t have a previous record, he or she can get an expunction,” Rubin says. If the individual is over the age of 18 at the time of the crime, he or she will have to wait 15 years to get it expunged. “And that’s a long time,” Rubin says. “The damage is done.”

In 2009, North Carolina Senator Ellie Kinnaird sponsored a bill to reorganize the state’s expunction statutes. “They were scattered in the criminal code all over the place,” Rubin explains. “She was able to move them all to one place and do a little bit of streamlining to make them easier to apply.” When all of this reorganization took place, Rubin had to learn it. “Since I had to learn it,” he says. “I wrote it down.” What he wrote down became the online guide, “Relief from a Criminal Conviction.”

Receiving “relief” from a conviction

An expunction is not the only type of “relief” from a criminal conviction. Relief, according to Rubin, can come in two forms—getting the conviction permanently deleted from your record (an expunction), or “terminating the restrictions” that the conviction places on you.

One year after receiving a conviction, if the offender hasn’t committed any other crimes, he or she can go to the court to request a Certificate of Relief. “Under this procedure, they can show the court what they’ve been doing – holding down a job, or going back to school – and shouldn’t continue to be burdened by their conviction.  If the judge is satisfied with the individual’s progress, he or she can issue a Certificate of Rehabilitation—it’s a court stamp of approval,” Rubin says.

So that person can then show that Certificate of Relief to prospective employers. The document also includes a limitation of liability. “An employer might be reluctant to hire someone who committed an offense involving fraud because if that employee commits a further fraud with the company’s customers, the employer could get sued for being negligent for hiring the person in the first place,” Rubin explains. “The certificate of relief limits the liability of the employer who hires that person.” That’s a big step forward in encouraging employers and landlords to do business with people who have criminal records.

The Southern Coalition for Social Justice works tirelessly to help grant Certificates of Relief to people across the state of North Carolina. So far, they’ve worked with clients in 33 counties, with many good outcomes, according to Atkinson.  “In the case of one client, she checked the box that asked if she had ever been convicted, then she wrote: ‘Please allow me to explain in my interview,’ and she attached her Certificate of Relief,” Atkinson says. “She explained the limit of liability statute and that the employer could not be sued for hiring her. It resulted in her getting an assistant manager position at a hotel—even though she had theft on her record.

“It’s still very much a new tool,” Atkinson says. “It didn’t come into existence until 2012, but it’s having an impact – and it can have a bigger one.”

Change is the only constant

In the last few months of 2015, the Relief Guide website received over 8,000 unique visitors, according to Rubin. It is one of the most popular webpages at the School of Government. “It’s the type of thing that affects everybody,” he says. “These lingering convictions can affect people who have struggled in their lives and are trying to reintegrate into society, but it can also create barriers for college kids.” Rubin says he occasionally receives phone calls from Carolina Legal Services about student cases involving alcohol, drugs, and trespassing. “The laws are surprisingly complex so they call to talk about some of the gray areas and try to figure out if there’s a possibility for relief and how to navigate the law,” Rubin says. “Sometimes it just helps to discuss things that are unclear. We brainstorm.”

The surprising complexity of laws—even for seemingly simple misdemeanors—illustrates why the Relief Guide and C-CAT are so important. Because laws are differently worded and are constantly changing, consistency is critical, Rubin stresses. “So you have to take the law and basically code it in a consistent way,” he says. “It’s not just a matter of getting the data in. It’s getting the data into the system in a way that people can search it.” That’s one challenge. The next is keeping it up to date.

For Atkinson, C-CAT is the first step. “We’ve created transparency and education around invisible punishment for people with criminal records,” he says. “Now we need to let decision makers know about the real barriers people are facing once they’re finished with their contact with the system. If we want to have safer communities, we need to remove those barriers.”

John Rubin is the Albert Coates Professor of Public Law and Government at the UNC School of Government.

Daryl Atkinson is the senior staff attorney at the Southern Coalition for Social Justice.