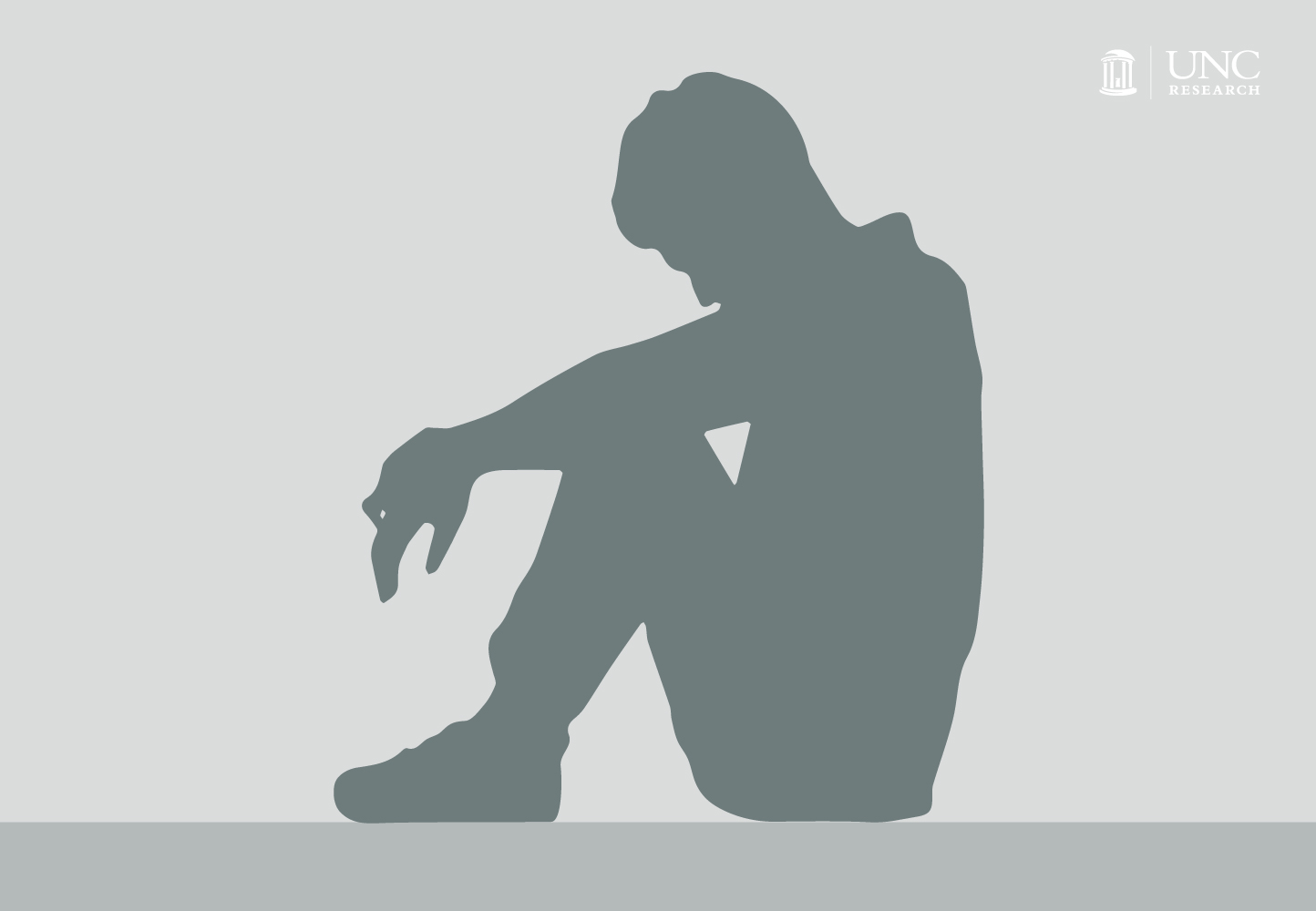 Approximately 2 million North Carolinians live with some kind of mental illness. The UNC Center for Excellence in Community Mental Health was founded to help the most vulnerable individuals in this population as they try to cope with the symptoms and stigma associated with mental illness.
By Mary Lide Parker
Health

On a Tuesday morning, you get in your car and drive half an hour to see your first patient. He is a 45-year-old man with schizophrenia who has been evicted twice, and may face eviction again if he doesn’t clean his apartment. You help him do laundry, and ask about his medication. When you find out he lost his prescription, you call the pharmacy.

Next you drive into the adjacent county to visit a 32-year-old woman battling paranoia and depression. You accompany her to an appointment at Social Security, trying to help her cope with the stressors and distractions that come with an hour of sitting in a large waiting room. The last time you did this, she had a panic attack. Today is better.

At 2p.m., you meet with a 24-year-old woman suffering from bipolar disorder and the whims of an abusive alcoholic boyfriend. As you discuss their domestic disputes and the possibility of filing for a restraining order, the boyfriend kicks the door down. You call the police, and then you call your team member — you’re not going to make it to your next appointment.

If you work on an Assertive Community Treatment (ACT) team, this is a typical work day.

ACT is a community-based service designed to help people with severe mental illnesses such as paranoia, schizophrenia, and bipolar disorder. An ACT team includes a group of professionals from a wide range of disciplines — psychiatry, social work, substance abuse, nursing, vocational rehabilitation, peer support—who visit clients in their homes, providing services that are typically only found in a treatment center or from multiple visits to different specialists.

“There is a real outreach component to it,” says Emily Clark, the ACT Team Lead in Wake County. “The idea is that we’re reaching a segment of the population that has really significant treatment needs but wouldn’t otherwise be able to get those needs met.”

In the United States, approximately 20 percent of the adult population has been diagnosed with some form mental illness. And roughly 10 million people live with severe mental illness, which is defined as a serious functional impairment that substantially limits one or more major life activities, according to the National Institute of Mental Health.

When it comes to mental health care, the United States has “a culture of institutions,” according to Lorna Moser. “People with serious mental illness often spend a lot of time in institutions,” she says. “And it’s not just jails or hospitals, but group homes and assisted living homes — because that’s the only way services are provided.”

Moser and her colleagues at the UNC Center for Excellence in Community Mental Health (CECMH) believe people diagnosed with severe mental illness have a right to live independently with the right support mechanisms in place.

When an individual becomes psychotic, he or she can lose everything — from employment to freedom to housing to relationships.

Founded in 2009, CECMH has continued to evolve and expand their services, moving far beyond assessment, medications, and therapy to address the full range of needs to help people in their recovery journeys. The Center provides a comprehensive set of clinical and rehabilitation best practices, for which it provides training and technical assistance, statewide and nationally.

“Everything gets stripped away and you have to build all that back up,” Gilmore says. “The traditional medical system can only get you so far — it can get you stable — but it doesn’t help you fully recover from your illness, and that’s one of the goals of the center, and ACT.”

Doing whatever it takes

Programs like ACT allow the center to provide more comprehensive assistance to patients by combining medical and psychological care with social and rehabilitation services. “The spirit of ACT is you go to their house and do whatever it takes to help them to succeed in the community,” Moser says.

Clark believes this is the only viable option for most of the people she sees. “A significant percentage of the folks who are served by ACT are homeless or have substance abuse issues or criminal justice involvement,” she says. “They have chaotic lives that keep them from engaging in a traditional system.”

These individuals often fall through the cracks because they don’t access outpatient care after they are discharged from a hospital or treatment center. But when they connect with an ACT team, somebody will ensure their basic needs are met including finding housing, receiving primary care, and managing their medication.

“You get an opportunity to see people make improvements in their lives — sometimes very slowly — but this is a really effective way to help them make progress,” Clark says.

One of the greatest strengths of ACT, according to Clark, is the lack of a time limitation on services — the program is designed to provide services long-term, even indefinitely. “We have a lot of folks who are working toward goals and are able to graduate out of the ACT team,” Clark says. “But we also have people who will always need this level of care. So it’s designed to do that, too.”

The model for ACT originated in the 1970s, and research over the decades has shown its effectiveness. Despite the strong evidence for it, the access to high-quality ACT services is a challenge in most communities, according to Moser. In addition to working with the public through the local ACT teams (serving Orange, Chatham, Durham and Wake counties) the center also provides training, coaching, and evaluation services for the rest of the state. “A big part of our job is to help translate what we know to be good practices into the provider community,” Moser says. 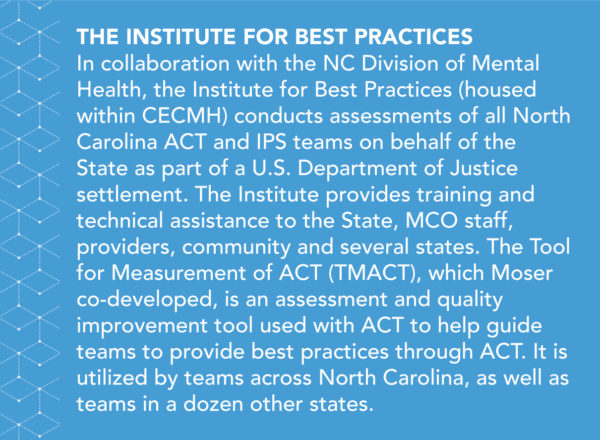 In addition to providing medical, psychiatric, and social care to these individuals through ACT, CECMH also helps them find employment through the Individual Placement and Support program (IPS).

Research shows the routine of a regular job can significantly reduce mental health symptoms and substance abuse, according to Hillary Little, the team lead for the UNC IPS team. “Having something meaningful to do every day, and having colleagues and friends to interact with is incredibly helpful,” she says. “And gainful employment has the added benefit of reducing people’s dependence on subsidies and government help.”

Between 60 and 70 percent of people with a serious mental illness diagnosis want to work, yet the unemployment rate for this population is 85 percent. “Think about the two most commonly asked questions when you meet someone,” Little says. “What is your name? And what do you do? Having an answer to that second question is incredibly empowering.”

Within the IPS program, Matt Diehl leads a team of trainers who help evaluate the success of 37 sites across the state. North Carolina isn’t the only state doing this — 23 others host similar programs, as do a handful of international sites. Research from many of these locations shows that the closer a program follows the IPS model, the higher the employment outcomes.

In 2012, the U.S. Department of Justice brought a lawsuit against the state of North Carolina for violating the rights of people with disabilities, according to the Americans with Disabilities Act (ADA). The DOJ said North Carolina restricted the rights of people with mental illness by failing to provide adequate opportunities for them to live in more integrated settings, instead of institutionalized facilities. The state entered into a settlement agreement that included requirements to fund programs like ACT and IPS. “A lot of our momentum and support has come from the settlement,” Moser says.

“One of the biggest problems is we invest so little money into the mental health and substance abuse fields, and we expect so much,” Moser says. “The stress that comes with this job is high, and the paycheck is low.”

The problem extends beyond North Carolina to the familiar narrative around the ongoing debate over funding for Medicaid. “Not having Medicaid expansion has not helped things in NC in this regard,” Moser says. People who don’t have access to Medicaid often rely on state funds.

From the ACT teams, to their clients, to healthcare organizations, the center acts as an intersection for many different stakeholders. “I think the flux of change will always be a challenge,” Moser says. When the Center for Best Practices started in 2013, there were 12 managed care organizations in the state — now there are seven. “They keep merging and they all have different rules, different funding, different authorization periods — it creates a lot of confusion and uncertainty,” she says.

The UNC Center for Excellence in Community Mental Health is the only center of its kind in North Carolina, and one of just a handful across the United States. “People with mental illness have difficulty advocating for themselves — there’s such a stigma,” Gilmore says. “There are obviously advocacy groups, but compared to a lot of other traditional medical illnesses, there just isn’t that sense of urgency.”

Even when compared to heart disease or cancer, severe mental illness is still one of the costliest health conditions. “Considering the total cost of lifetime disability, and then all the other things — homelessness, jail, unemployment—the societal costs are just huge,” Gilmore says.

The direct cost of treating and supporting mental illness is approximately $55 billion a year, according to the American Psychiatric Association. In 2012, mental illness cost the United States $467 billion in lost earnings and public disability insurance payments.

But Gilmore believes it doesn’t have to be that way. “Our treatments are much better than they were and with the right support people can function in the community well,” he says. “Besides reducing costs to taxpayers and to the government, it’s good for patients. It helps them to be a part of the community, to contribute, and to have a meaningful life.”

Part of that meaning comes directly from the ACT team members. “Working in the community and being in peoples’ homes gives you a fuller picture of what these peoples lives are like,” Clark says. “We work with people really intensively, and we see them so often over the course of years and years, we get to know them really well. We have an opportunity to build strong relationships with our clients and their families, and really help them.”

Lorna Moser is the director of the Institute for Best Practices in the Center for Excellence in Community Mental Health, and coordinator of the NC ACT Coalition, a grassroots organization of ACT providers.

Emily Clark is the Team Lead for the Wake ACT team, operated through the UNC Center for Excellence in Community Mental Health.

Matt Diehl is the IPS TA Manager at the Institute for Best Practices Center in the UNC Center for Excellence in Community Mental Health.