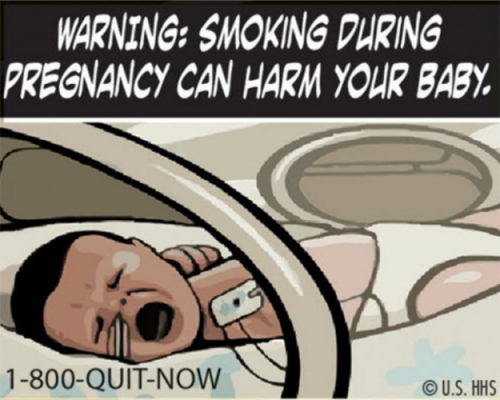 Courtesy of U.S. Department of Health and Human Services
The Tobacco Control Act gave the Food and Drug Administration authority to put new warnings on cigarette packages, but the agency and the tobacco industry are butting heads on exactly how new warnings will look.
By Kamaara Lucas
Health

The last time you bought something at a drug store, you probably noticed cigarette packages lined up in rows behind your cashier. Looking at the packages straight on, you probably didn’t even see the small health warnings on the side.

If you were at a drug store in Canada, you’d see cigarettes in the checkout area, too. But these packages are different. You might see a large image of decaying teeth, with big text on the front that reads: “Cigarettes cause mouth disease.”

In 2011, the FDA issued a rule requiring all cigarette packages sold in the United States to include color warning images. The tobacco industry sued the FDA and argued that the images conflicted with companies’ right to free speech. According to Seth Noar, a health communications researcher at UNC, it is likely that the FDA will propose new images.

Noar and Noel Brewer, a UNC researcher who studies health decision making, led a two-year study on the effectiveness of image-based warnings, which 77 nations already have on cigarette packages. These sometimes gruesome images are prominently displayed on packaging and often depict people suffering from tobacco-related illnesses.

The team did a meta-analysis of 37 experiments from 16 different countries with over 33,000 participants. Each study looked at reactions to picture-based warnings and text-only warnings. According to Noar, this is the first study of this scale to analyze all of these smaller experiments on image-based warnings. 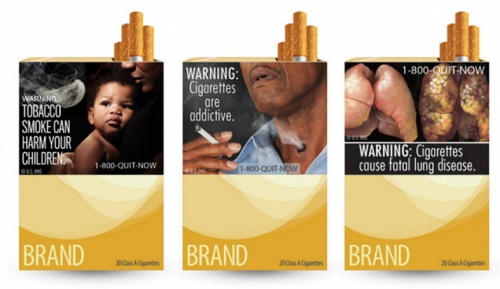 Courtesy of U.S. Department of Health and Human Services

This study looked at individuals’ initial reactions after seeing the image warnings briefly. To see how repeated exposure to these warnings affects people, Brewer and Noar are working on a study that will measure whether smokers who carry around cigarette packages with image warnings make more attempts to quit.

In this follow-up study, the researchers will also look at the social interactions that result from image warning labels. According to Brewer, having a package with a large pictorial warning on it sparks conversations about the harms of smoking and whether to quit.

“Smoking is often a social experience, and now the harms of smoking also become part of that experience,” Brewer says.

Among the nations that already have image warnings on packaging, some top players include Australia, Canada, and Uruguay. Canada was the first nation to use full-color image warnings back in 2001.

Australia and Uruguay have taken bolder approaches. Uruguay’s image warnings now take up 80 percent of cigarette packaging. Australia goes even further by using plain packaging, in which companies cannot include their brand colors or designs on packages. Instead, the brand name appears in plain, gray text with a large image warning.

According to Brewer, research shows that the majority of smokers no longer even notice the current small, text-based U.S. warnings, which have not been altered since 1984.

Seth Noar is codirector of the Interdisciplinary Health Communications program at UNC’s School of Journalism and Mass Communication, and is a member of the Lineberger Comprehensive Cancer Center. His research focuses on determining what types of messages are effective in changing people’s health behavior.

Noel Brewer is an associate professor at the UNC Gillings School of Global Public Health. He is also a member of the Lineberger Cancer Center. His research focuses primarily on the psychology behind risky health decisions.

Other authors on the study from the UNC Gillings School of Global Public Health included Kurt Ribsl, a professor of health behavior; Marissa G. Hall, a doctoral candidate; and Jessica Pepper, a postdoctoral fellow. Diane B. Francis, a doctoral candidate at the School of Journalism and Mass Communication, was also an author.

The research analysis was funded by a grant from the U.S. Food and Drug Administration Center for Tobacco Products and the National Cancer Institute.