The ground tremors slightly. In the distance, a soft boom sounds, echoing throughout the surrounding forest. “It’s a pretty regular occurrence to hear tanks and large ammunition being fired,” says Mike Kunz, chuckling.

Then, as if on cue, a shadow creeps over the research team as a massive C-17 cargo jet momentarily blocks out the sun. “For being as remote as we are,” Kunz adds, “there is actually pretty constant noise — you just get used to it after a while.”

Some of the largest reservoirs for biodiversity in the nation reside on more than 37,000 square miles of Department of Defense land. The military, it turns out, is one of the country’s strongest advocates for wildlife and plant conservation. Kunz, a conservation ecologist with the North Carolina Botanical Garden (NCBG), has spent the past six years working on a rare plant reintroduction program at one of the most populated military bases in the world: Fort Bragg.

“Most people don’t know the military has this strong environmental ethic,” Johnny Randall, director of conservation programs at the NCBG, says. “They don’t want to see these species go extinct — and neither do we.”

With the same goals in mind, the garden partnered with the Endangered Species Branch at Fort Bragg and the Army Corps of Engineers in 2011. Together, they propagated and reintroduced the federally endangered rough-leaved loosestrife, as well as the Georgia indigo bush, sandhills milkvetch, and sandhills lily — all “species at risk,” according to the military. 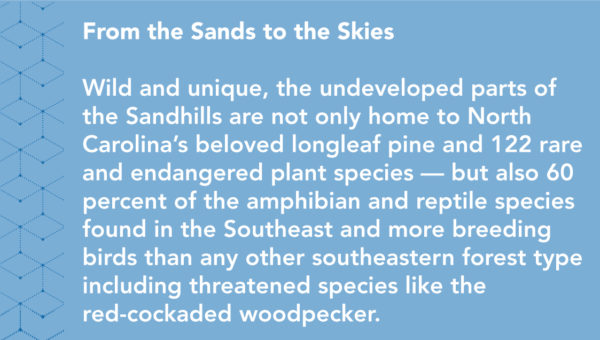 Approximately two-thirds of Fort Bragg’s 500-square-mile installation is training grounds — and maintaining the natural environment is crucial. Remove just one of those endangered or rare plant species from the Sandhills ecosystem — and a ripple effect of unknown size would occur, affecting pollinators, other plants, and soil stabilization.

“Even if we don’t know specifically what will happen, we know these plants each play a unique role within the ecosystem,” Kunz says. All of these species are native to the Southeastern United States — some almost exclusively to Fort Bragg. “For example, two-thirds of the known population of Georgia indigo bush occur on the military base,” he says. “So if we lose those resources, we’ve lost the majority of the population in the entire world for that species.”

Hundreds and hundreds of blue and red flags stretch across the Fort Bragg forest. These colorful markers show the breadth of this project, each one identifying one plant within the four species studied. Some are natural occurring, while others were propagated and reintroduced by the researchers — thanks to the expertise of the NCBG.

Starting in 2011, between the months of March and October, Kunz made the hour-and-a-half drive to the base multiple times each week to help take demographic measurements like height and width, stem diameter, and the number of flowers and seeds produced on each individual plant. For the reintroduced populations, the research team propagated and out-planted literally thousands of individuals for each of the species, over multiple years. They also took measurements of the natural populations, of which there were also thousands. 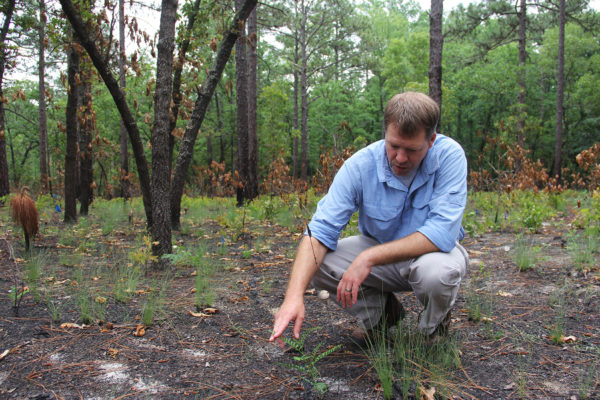 Kunz explains how prescribed burns reduce the risk of other, more serious fires and stimulate germination for various plants.

Rare plants don’t get a lot of attention, according to Janet Gray, the base’s endangered species botanist. “They’re blank slates of information,” she says. “And we’ve gained so much of it that now we know how to perpetuate and maintain these populations. It’s really groundbreaking work.”

One method of preserving these species is prescribed burns. Since the Sandhills experience natural fires every one to three years in the Sandhills, the burns prevent more serious fires from occurring and stimulate germination for the already fire-adapted ecosystem. “The surrounding longleaf pine and wiregrass depend on it for regeneration,” Kunz explains. “And all of the associated species, although not fire-adapted, benefit from it, too.”

In fact, if it wasn’t for all the routine live ammunition work conducted by the military throughout the year, some of these plant species may have disappeared decades ago. “Those exercises can actually cause wildfires,” Randall says. “And if those wildfires never occurred, then these plants would have gone extinct a long time ago. It was only within the last 30 years that these species were discovered on base. When botanists and biologists started doing inventory work there, they realized it was a treasure trove of rare plants.”

Protecting the rare plant populations on base not only prevents these species from becoming federally endangered but also helps Fort Bragg maintain its finite training land — so consistent collaboration with multiple environmental agencies such as the Nature Conservancy and the U.S. Fish and Wildlife Service is key. Today, the base’s conservation efforts are a national model for other military installations — 88 partnerships in 30 states now have federal funding for these types of projects.

“Fort Bragg has been a really great installation to work with because they have a high level of dedication to conserving their natural areas,” Kunz says. “For someone who was never in the military, it was definitely an eye-opening experience to see all the work our military does.”

Mike Kunz is the conservation ecologist for the North Carolina Botanical Garden.

Janet Gray is the endangered species botanist within the Endangered Species Branch at Fort Bragg.

Special thanks to Matt Hohmann and Wade Wall at the U.S. Army Corps of Engineers, ERDC-CERL for their direction and collaboration.