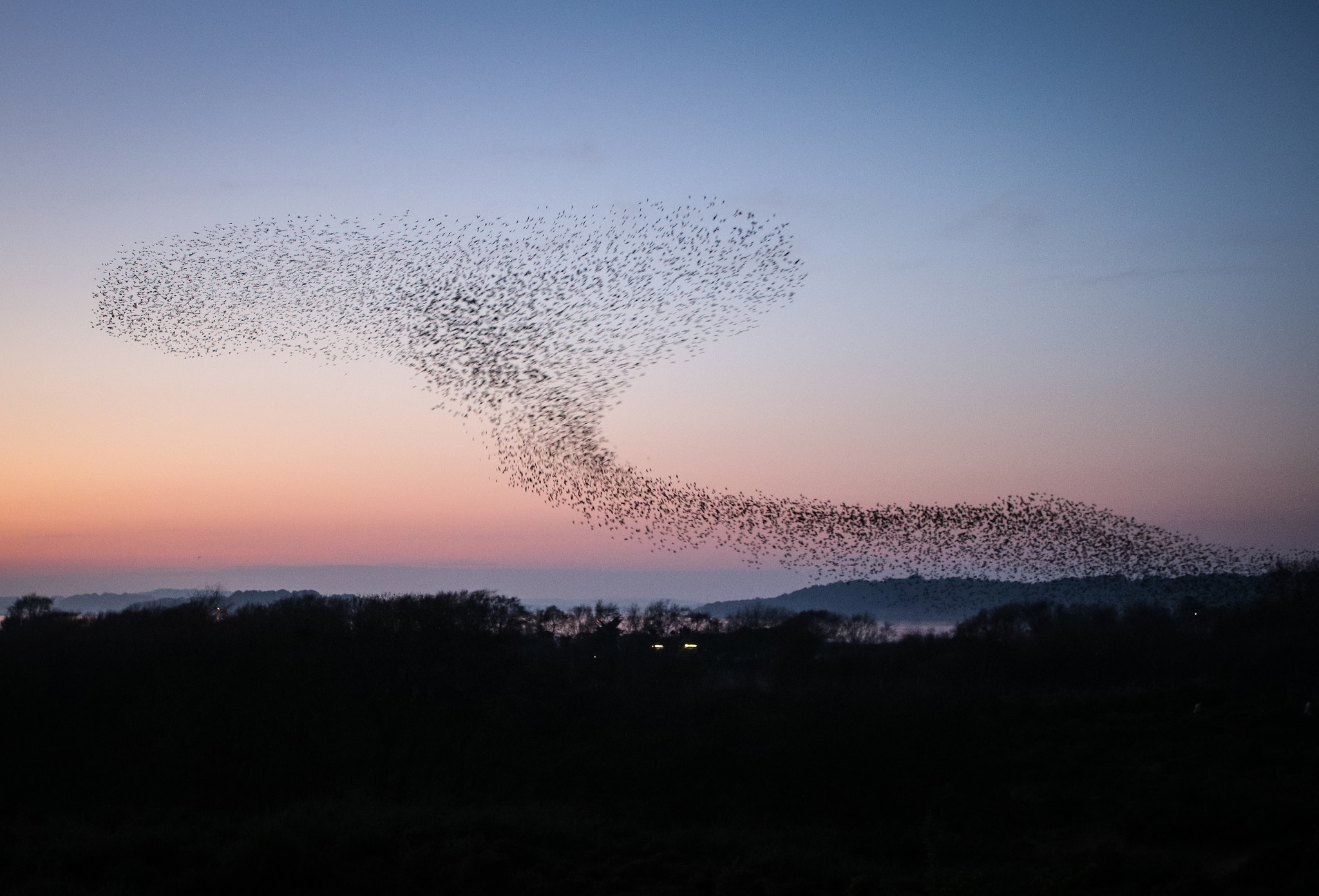 When starlings flock so tightly together, they look more like one giant organism rather than thousands of individual birds, which deters predators and increases the speed at which they can fly. (photo by Tanya Hart/Wikimedia Commons)
By Alyssa LaFaro
Earth | Foundations

A dark, shape-shifting mass moves above a tree line. Its fluctuations are almost eerie, like something from a science-fiction movie. Upon closer inspection, it appears that the shadowy figure is not one creature but many — thousands of birds moving in unison.

“When I give a class, I play this video [of flocking birds] and ask students to stare at it for a while and write down what they observe,” says Daphne Klotsa, a UNC applied physicist. “One thing we see that’s quite striking is it looks like one organism. You don’t even know what one individual within the system looks like. It looks like one material that’s stretching.”

Bird flocks are a regularly occurring natural phenomenon that many of us may not think twice about. But if you stop to ponder how they work, things get interesting. There is no leader guiding the birds, for example, and yet they move in such a coordinated way that each individual almost flawlessly shifts with the mass. Each bird is only aware of its immediate neighbors. And while the interactions are simple, the overall movement is complex.

Flocks are categorized as active matter — changing systems made up of a large number of individuals that convert energy into motion, according to Klotsa.

Schools of fish, colonies of ants, and groups of bacteria are also models of active matter. As a materials scientist, Klotsa creates synthetic materials that match the functions of these biological mechanisms. She studies swarms to understand how individuals cooperate to work as part of a system, knowledge that can be applied to autonomous vehicle technology, drug delivery, and escape routes for crowds exiting buildings during emergencies.

“It would be cool to design systems from the bottom-up, where each individual is programmed to have an interaction that creates emergent behavior,” she says. “Instead of designing a complex robot that could climb a fence, you can design lots of small, dumb robots that know how to work together to form a ladder.”

When ant colonies are flooded, for example, they form rafts or bridges to survive, and schools of fish often fool predators into thinking they’re a solitary organism of equal size.

“They survive because they cooperate,” Klotsa says — a valuable lesson that humans can learn from these phenomena.

Klotsa is especially interested in the collective behavior of what are called meso-scale organisms, which range from 0.5 millimeters to 50 centimeters in size — things like plankton, bacteria, flies, mosquitoes, small jellyfish, and brine shrimp. They are larger than microscopic organisms like algae, cells, and viruses, but smaller than birds and mammals.

“There are millions of organisms at this scale. We know very little about them and almost nothing about their collective behavior,” Klotsa shares.

She hopes to change that.

A field on the move

The first research projects on active matter began about 30 years ago, but physicists have only been studying the topic rigorously for the last 10, according to Klotsa.

Two papers led to the field’s creation. The first was produced in 1987 by computer scientists in search of an algorithm to form swarms in computer animations. A few years later, in 1994, physicists developed a mathematical model to map the movement that occurs within these systems.

Klotsa first became interested in active matter during her PhD program at the University of Nottingham in the U.K. While there, she studied granular materials — big particles like sand that lose energy when they interact. While observing how sand moves in water, she became fascinated with how organisms swim.

When a person swims, they can push their hands back to propel themselves forward. Just one stroke puts the body in motion. But a much smaller organism within the same body of water undergoes a different experience. Moving forward is almost futile, as the water to them feels like swimming in honey to us.

“That’s why bacteria and sperm and other organisms of that size have a corkscrew tail,” Klotsa explains. “At those small scales, those organisms have to swim in elaborate ways, otherwise they end up in the same spot.”

Klotsa spends a lot of her time looking at fluid systems. Previous studies suggest that the collective movement of swimming meso-scale organisms contributes to large-scale nutrient mixing within the ocean. This idea, called biogenic mixing, suggests that migration of these organisms en masse may also affect tides, wave formation, and other forms of ocean shifting. But understanding whether this is true requires a lot more research.

Klotsa wants to know what happens at the boundary between microscopic and meso-scale organisms. To do this, she and her lab designed a series of dumbbell-like swimmers called spherobots. Each one comprises a plastic ball attached to a glass ball with a spring in between. They placed the spherobot into a vibrating saltwater-filled container and changed the water’s viscosity over time to learn how it affected the swimmer’s movement. Unlike microscopic organisms, meso-scale organisms create finite inertia, meaning their movement changes in response to the viscosity of the fluid they swim in.

Eventually, using simulations, the researchers predicted a tipping point where the swimmer didn’t move at all. Some environments allowed the swimmer to move upward, while others forced it to move downward.

“What we wanted to understand is whether we can see differences in the fluid between the stationary and swimming dumbbells. […] With this very simple swimmer, we [now] have this wealth of behavior that is counterintuitive,” Klotsa says.

Experiments and simulations like this help Klotsa and other active matter physicists break down the mechanics of how meso-scale organisms move and, ultimately, help them create synthetic systems that can be applied to a variety of fields.

Klotsa is also interested in what happens when two or more active matter systems interact within the same environment. A good example is dogs that herd sheep. The dogs move back and forth in a way that moves the sheep in unison toward a specific destination.

“So one species controls another,” Klotsa says. “What I would like to do is get more understanding of these systems little by little in order to really start designing them.” 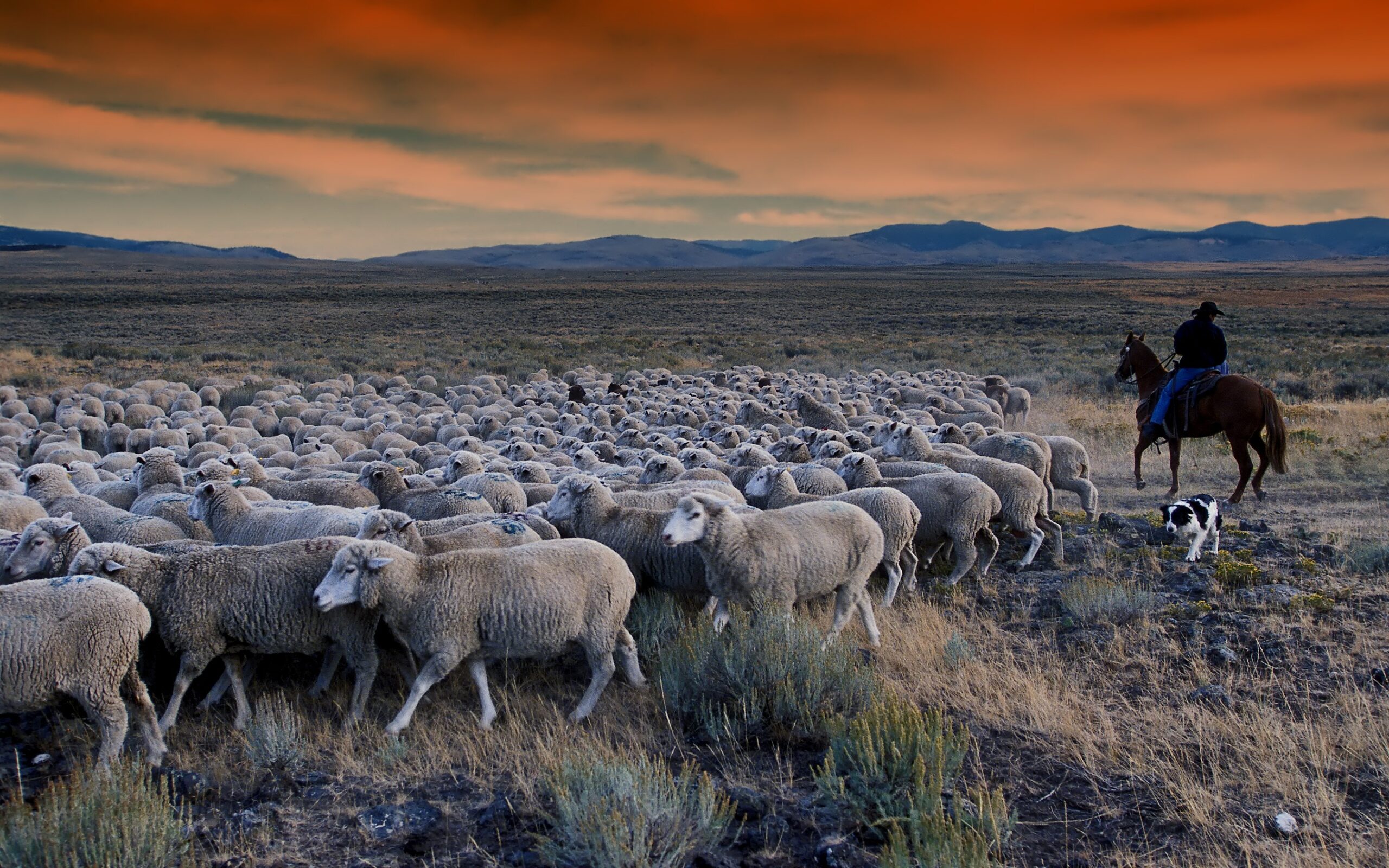 A dog runs up and down a herd of sheep to move them in a specific direction. (photo by David Mark/Pixabay)

Fish swim in schools to protect themselves from predators, move more efficiently, and improve foraging. Understanding how they do this can be applied in physics in a multitude of ways, according to Klotsa.

Experimental physicists can take nanoparticles and coat them with various materials that react to a stimulus. Materials that are light-responsive, for example, can be applied to nanoparticles so that, when you shine a light on them, they move. This could aid in therapies where a drug needs to go directly into a tumor as to not harm the rest of the body.

“We have a lot of freedom in designing interactions at the nanoparticle scale,” Klotsa says. But developing these processes at a larger scale — like among autonomous vehicles and human crowds — is trickier.

Think about what happens when you’re driving down the road and you hear a siren. The immediate response is to pull over to let the emergency vehicle pass — but this is rarely a smooth process. Some drivers don’t pull over far enough, while others just stop in the middle of the road. Oftentimes, it mimics the experience of two people facing off in a hallway in an attempt to pass one another but, instead, they do an awkward dance until one finally moves around the other.

“It would be interesting to look at self-driving cars as a swarming system,” Klotsa says. “The desired function for the average person would be to get from A to B as fast as possible. But if a fire truck or ambulance approaches, the optimization changes, delaying everyone else so that they can get where they need to.” 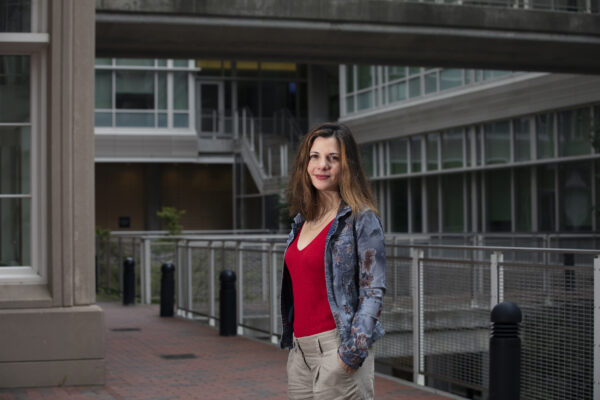 Here’s a different situation: The fire alarm in an office building goes off and, like clockwork, people begin to head toward the exit. Then, all of a sudden, smoke begins to waft into the room — and people panic. Hundreds of workers rush toward the stairwell and a bottleneck starts to form.

This same phenomenon happens in a coffee hopper. The beans get stuck as they head toward the narrow shoot. To prevent this, some hoppers include a ball in them that breaks the movement of the beans into two separate paths. This concept can be applied to an emergency exit. Studies show that by putting an obstacle a few feet in front of an exit, people form two lanes and evacuate buildings more efficiently.

“Because then people don’t jam at the exit; they slow down before,” says Klotsa. “It’s fascinating, and the only way you come up with this approach is through using physics or math.”

Klotsa is most interested in using her research in this way to help humankind.

“I would love to design systems around human behavior that help people organize and cooperate,” she says. “I love the idea of cooperation over competition. I love it because of the deeper, philosophical values we have. It makes me happy, and it’s motivating.”

Daphne Klotsa is an assistant professor in the Department of Applied Physical Sciences within the UNC College of Arts & Sciences.