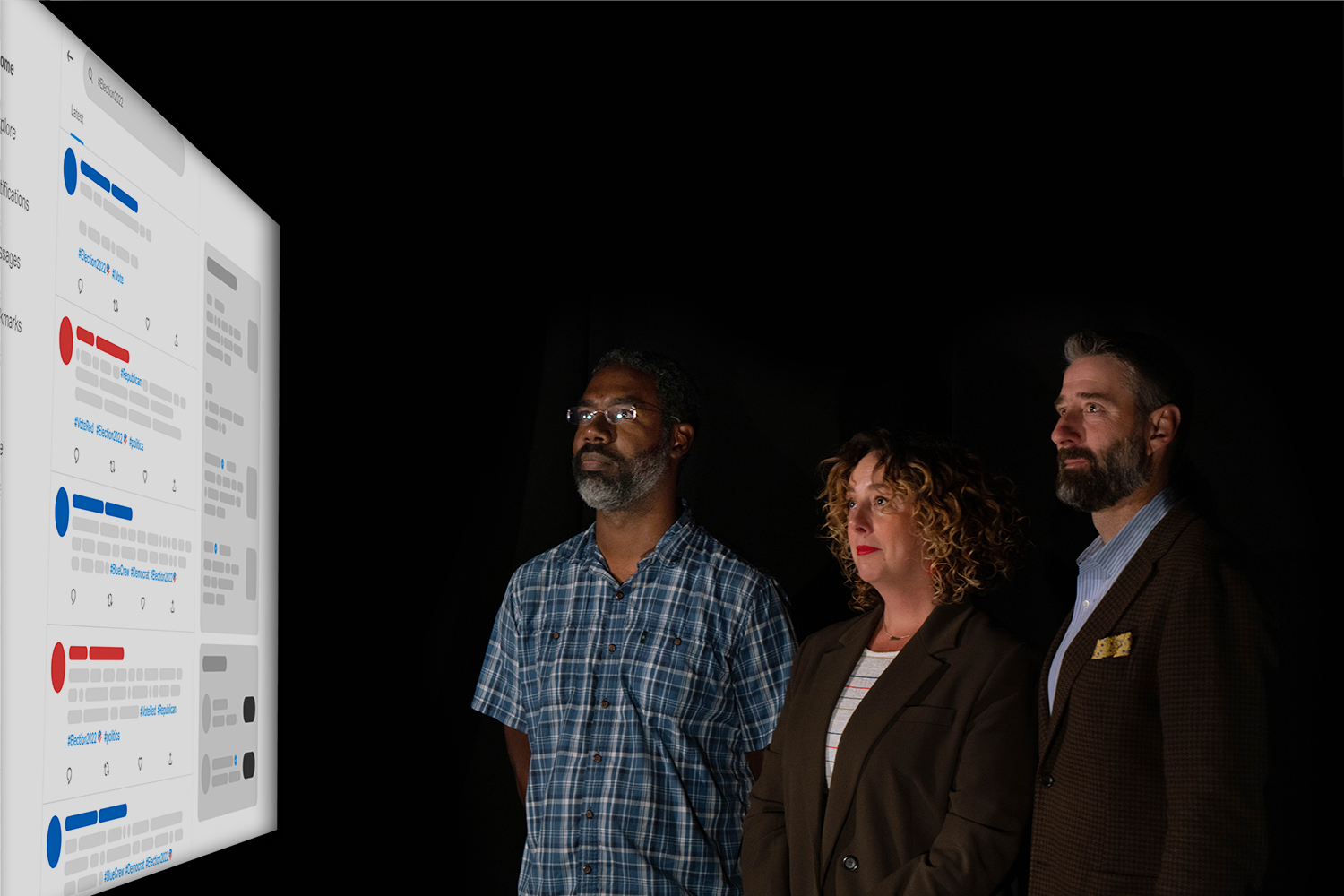 Deen Freelon, Shannon McGregor, and Daniel Kreiss are all researchers with the Center for Information, Technology, and Public (CITAP) Life, which addresses the intersection of politics and digital technology. (photo by John Gove; graphic by Corina Cudebec)
By John Gove
Society

On November 8, many Americans will set aside time in their day to gather their keys and thoughts and make their way to a polling booth. These midterm elections will determine whether Democrats will maintain their majorities in Congress or if control will shift to the Republicans. Other elections on the municipal and state levels will determine the direction that states take on hot-button issues like abortion, conservation, and inflation. Elections and issues such as these are often characterized by polarization.

Polarization refers to a division in two sharply contrasting groups or sets of opinions or beliefs. Scientifically, polarization looks like north and south or positive and negative. Socially, think of Coke and Pepsi or Marvel and DC.

Many of us associate social media and technology in the U.S. with politics, but researchers at UNC-Chapel Hill’s Center for Information, Technology, and Public Life (CITAP) are framing the issue differently by diving into how politicians advertise on social media platforms and how users consume political content, among other related topics.

CITAP researches and produces resources to combat the oversimplification by “complicating, enriching, and nuancing the simplistic narratives around the role of technology and politics in society,” says Shannon McGregor, a senior researcher with CITAP and professor within the UNC Hussman School of Journalism and Media.

Both good and bad come from platforms such as Facebook and Twitter, and the lines between the two often blur and intertwine. But the issues that involve social media and politics are not as simple as polarization.

“The Black Lives Matter movement would not have been possible without social media,” says Daniel Kreiss, a principal researcher with CITAP and professor at Hussman. “But, political parties can take advantage of the platforms.”

Democracy is at the heart of what CITAP does. The researchers use this to guide their questions, discovering how aspects of technology, mis- and disinformation, and social media align with or diverge from small-d democratic ideals.

By arriving at conclusions that may be favorable to one party or another, research at CITAP can appear to align with an agenda. But that would not be research.

“Our beliefs are what should be. Research is what is,” says Deen Freelon, a principal researcher with CITAP and professor within the Hussman School of Journalism and Media.

Beliefs may affect the questions that researchers ask, but once a study is underway, they try to minimize the impact of their beliefs on their results. Freelon emphasizes that searching for truth drives CITAP forward in their research.

Research can be criticized based on the design and methods, but not on how favorably the findings reflect on certain parties.

“We all have our individual policy preferences, but we don’t allow what we wish were true to influence our process of discovering what is true,” Freelon says.

Advocacy involves the beliefs mentioned earlier — what we believe should be instead of what is the reality. This separation keeps CITAP aligned with democracy, instead of with Democrats or Republicans.

In his current project, Freelon focuses on how Twitter users consume political news.

Using Twitter timelines volunteered by a panel of users, Freelon is trying to clarify certain areas that blend everyday life with politics. Broadening the umbrella that the word “political” encompasses will enrich the data that are currently preliminary.

“Most information consumed is not political, and very few people consume a lot of political information,” Freelon explains.

What about the midterms?

Good data takes time. As researchers ask questions about the upcoming midterms, studies on the 2020 elections continue to be conducted and published. To know how different social pressures may affect an outcome, the election has to happen before questions can be asked or papers can be written.

CITAP continues to keep their hands full, though.

One of McGregor’s studies gathered and analyzed over 250,000 tweets to assess the role of gender and power dynamics during elections. When women run against men, for example, the female candidate is talked about more and replied to more — but she has less power to control the conversation.

Additionally, McGregor is working on a study categorizing the types of political Facebook ads run by Donald Trump and Joe Biden during the 2020 election. She frames the analysis not on if the ad attacks the opponent, but rather on who the ad appeals to.

Categorizing ads by their demographic appeal provides more data points than attack ad or not attack ad. The more data collected, the more McGregor can explain complications and nuances not shown by the oversimplifications.

Kreiss researches how private, for-profit platforms affect the political landscape. “Public awareness of this is increasing,” he says, but awareness and action function separately.

Following the 2016 presidential election, Kreiss and his colleagues compiled data and information on political advertising on U.S. internet platforms. After looking at blogs, posts, policies, and the terms of service of different platforms, they published a report to summarize the findings. In nine pages, the report is a crash course on understanding paid political speech to help the public understand what is going on and journalists to better cover the topic.

These reports are now a large element of CITAP’s publications. Kreiss is updating the report published in 2020. He is including any changes in content moderation and looking into how platforms deal with the mess of mis- and dis-information.

Midterms will soon pass, ballots will be counted, and people may or may not trust the results. For now, we only have data from the past to speculate about the future, but our political sphere continues to rapidly change with advancements in technology.

For journalists to effectively cover politics, and for the public to effectively inform themselves, the research at CITAP is vital. Their analysis of trends and the effects of technology on the political sphere translate what we observe into digestible data.

Shannon McGregor is a senior researcher with the Center for Information, Technology, and Public Life and an assistant professor within the UNC Hussman School of Journalism and Media.

Daniel Kreiss is a principal researcher at the Center for Information, Technology, and Public Life. He is also the Edgar Thomas Cato Distinguished Professor within the UNC Hussman School of Journalism and Media and an adjunct associate professor in the Department of Communication within the UNC College of Arts & Sciences.

Deen Freelon is a principal researcher at the Center for Information, Technology, and Public Life and an associate professor within the UNC Hussman School of Journalism and Media.