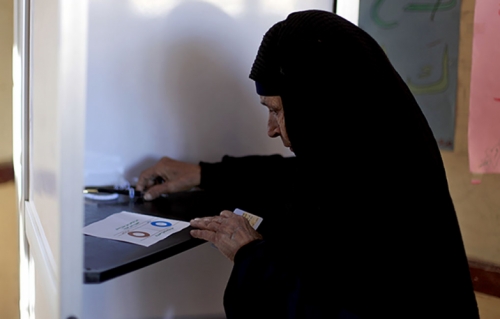 Courtesy of AP Photo/Khalil Hamra
An Egyptian woman casts her vote during the second round of a referendum on a disputed constitution drafted by Islamist supporters of President Mohammed Morsi in Fayoum, about 100 kilometers (62 miles) south of Cairo, Egypt, Saturday, Dec. 22, 2012.
By Susan Hardy
Invention

An old, repressive regime is out. Someone new takes power. First order of business: elect a new government. But how do you do that, exactly?

That’s the question the Egyptian military, Tunisian reformers, and other groups had to ask after coming to power in the Arab Spring of 2011. Some new governments were winging it, with mixed results. Others got good advice. One Carolina professor brought a message to as many nations as he could: Let history do the experimenting for you. Learn from other countries’ mistakes. You have choices about how to do democracy, and there are ways to predict the results.

Once upon a time, “democracy” meant North America, Western Europe, Australasia. Before the 1990s, what we knew about democracies mainly came from the West, says Carolina political scientist Andy Reynolds. But you can’t model the world after western-style democracy. “What works in France may not be what works in Kazakhstan or Argentina,” Reynolds says.

Then, after the Berlin Wall fell in 1989, and after countries in Latin America, Africa, and Asia moved toward democracy, suddenly Reynolds and others who study how democracies work had a lot more information about building new governments. “We could say to a country, ‘Okay, who do you look like? You don’t look like Russia—that wouldn’t be helpful. But you look a bit like Indonesia.’ And we can tell them about the four fascinating elections Indonesia has had—it’s been a pretty strong success. So we can say, if you want to do better economically and be more stable, think about copying Indonesia.”

In 1997, Reynolds and a colleague compiled all this data into a manual on designing electoral systems. When he travels around the world, people ask him to sign their copies. It was the first book to explain simply—almost like a cookbook—how different ingredients of an electoral system add up to different results.

For example, imagine an election for representatives to a parliament, where each district gets only one representative. If voters can choose only one candidate, people with minority interests will feel driven to vote not for the candidate who best represents them, but for the least objectionable candidate who seems likely to win a lot of votes, Reynolds’ manual explains. But if voters are allowed to pick a first, second, and third choice, they’ll probably pick their top candidate first.

In Egypt under President Hosni Mubarak, parliamentary representatives had to win more than 50 percent of the vote (in a first election or runoff) to be elected, making it difficult or impossible for anyone representing minority interests to get elected. And after the military seized power, Commander-in-Chief Hussein Tantawi planned on having the same type of electoral system. Was that a deliberate attempt to stack the new parliament?

Probably not, Reynolds says. More likely, the military just didn’t know how elections work. Why would they? “So they chose something they thought was reasonable—but it would have given the Muslim Brotherhood or Mubarak’s old regime people all the seats, and the Free Egyptians and Coptic Christians no seats.” 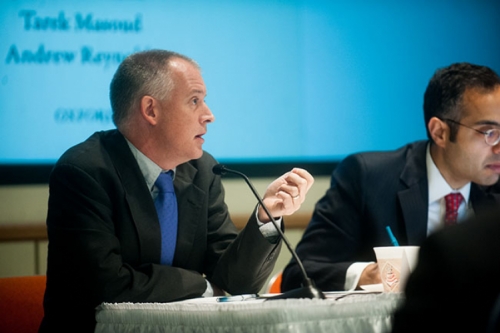 The U.S. government recruited Reynolds to go to Cairo and deliver this caution. It was pretty calm in Egypt when he got there. Most days, Reynolds walked along the Nile to Tahrir Square. But he couldn’t get his foot in the door with the military. Instead, he spent his time talking to groups eager to learn about democracy-building: legal groups, student groups, women’s groups, and new political parties.

When Reynolds got home, the U.S. National Security Council asked him and a Dartmouth professor to write a brief about why continuing the old electoral system would be a disaster, and what Egypt could do instead to make elections more likely to succeed.

“I was told that Admiral Mike Mullen, the head of the Joint Chiefs of Staff, and Robert Gates, at the time the Secretary of State for Defense, flew to Cairo with five pieces of paper. One was our briefing; the other four were on other issues. And they met with General Tantawi and said, ‘You need to do these five things.’”

Ultimately, Reynolds says, the military took some of his advice. They changed the electoral system so that two-thirds of parliamentary seats would be awarded in proportion to how many votes a party won.

He also gave advice—from afar—to Tunisia, and on the ground in Yemen and Libya. He was in Yemen in 2014 while beheadings were taking place, and in Libya he stayed in a hotel where 10 people were later killed. “Almost every place I’ve been in has been blown up or attacked, but I was never there at the time,” Reynolds says. “I’ve always been lucky.”

After watching some countries successfully oust oppressive regimes, and many fail to make lasting changes, Reynolds and his colleagues Jason Brownlee and Tarek Masoud wrote The Arab Spring: Pathways of Repression and Reform. Reviewers are calling it the best analysis yet of how and why regimes changed. The most successful countries, they write, were able to overthrow their governments because the old regimes weren’t backed by oil wealth or strong hereditary dynasties.

Tunisia, Reynolds says, is the only Arab Spring country so far to get on the path to a stable democracy, after ousting President Ben Ali. Reynolds and a team of experts helped advise the new government as it set up a true proportional system where voters choose between lists of candidates, where each list is made up of candidates from one party. If about a third of votes across the country are for a certain party, that party wins about a third of the legislature’s seats.

“In Tunisia, the constitutional design process was led by civilians—people who were invested in building a state, not just partisan control. And it’s been successful. Tunisia elected a government led by the Muslim Brotherhood. Then the Brotherhood lost the next elections, and the opposition came into power peacefully,” Reynolds says.

“In countries where civil society groups—women’s groups, religious groups, student groups—learn what works, they lobby and promote that. A lot of change comes that way. Our job is to bring lessons from lots of places to empower people and help them make their own decisions.”

Reynolds helps new governments because he wants minority groups to get a fair shake, he says. But he also works abroad because it helps protect the United States. “Stable governments are good for us,” he says. “That was the problem with Afghanistan—instability in that country provided space for someone to come and attack us here.”

Andrew Reynolds is an associate professor of political science in the College of Arts and Sciences. His latest book, The Arab Spring: Pathways of Repression and Reform, was published in April 2015. His coauthors are Jason Brownlee of the University of Texas at Austin and Tarek Masoud of Harvard University.