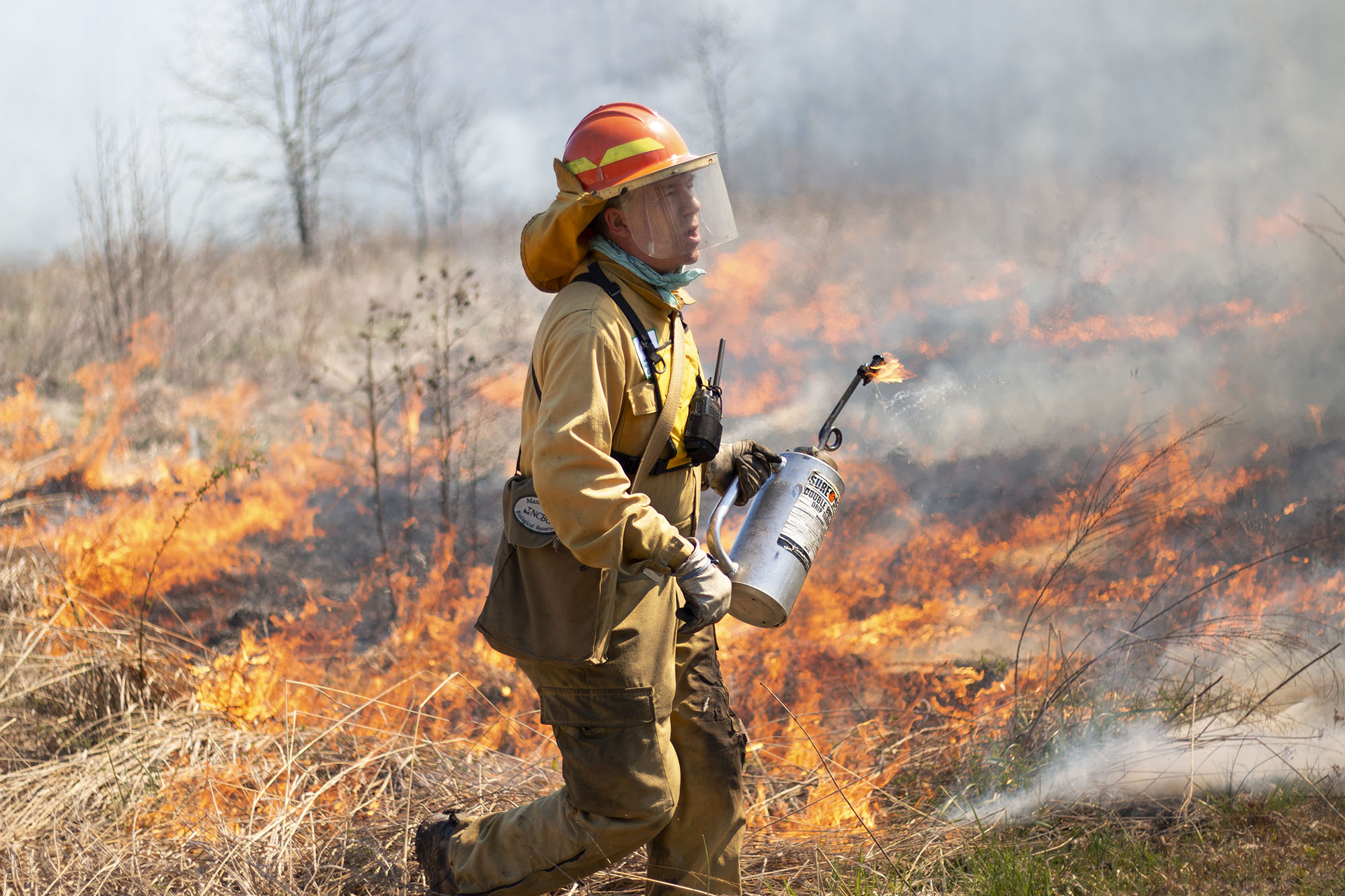 Past the practicing putters at the Finley Golf Course, the paved driveway veers off to the right and transforms into a bumpy, tree-lined dirt road. After a quarter-mile, sharp right turn, and a measured maneuver across Morgan Creek, arrive at the Mason Farm Biological Reserve — part of nearly 1,000 acres maintained by the North Carolina Botanical Garden (NCBG).

Other cars pull into the drive and, soon enough, the parking lot is speckled with people in yellow jumpsuits.

“It’s a beautiful day for a burn,” someone says.

Prior to the 18th century, springtime wildfires caused by lightning burned large acreages of land across the southeastern United States. Additionally, Native Americans intentionally set fires to grasslands to manage the habitat. “They did this at a very high frequency — some places burned as often as every two years,” says Neville Handel, the NCBG’s land manager. “When the Europeans got here in large enough numbers, though, they began suppressing wildfire activity. What you started to get was a large-scale transition from more open, savanna-like forested habitats to closed-canopied, dense forests.”

As the NCBG’s principle burn boss, Handel organizes five to eight prescribed fires throughout the year across the garden’s natural areas like the Mason Farm Biological Reserve and Penny’s Bend Nature Preserve. He creates and oversees plans for the safe execution of the fires, develops contingency procedures in case a fire escapes, manages the crew during the burn, and notifies emergency response agencies like the local fire department when burns occur.

“It’s not rocket science, but there’s a lot that goes into it,” Handel says. “You have to really understand the relationship between weather, fuels, and the landscape you are burning when running a prescribed fire.” 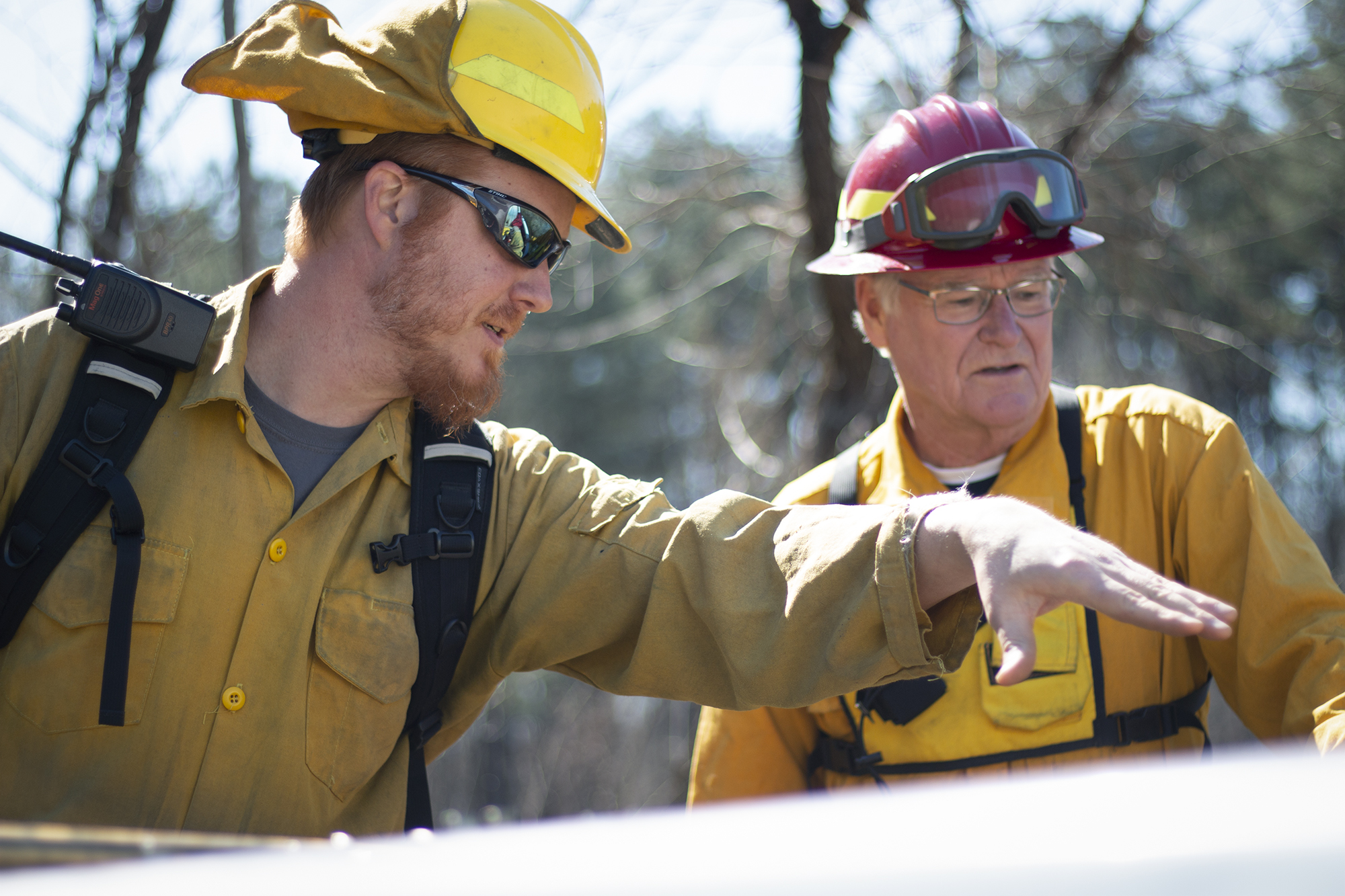 Handel discusses the day’s plan with Don Pelly, a volunteer at the garden. It’s mid-March, and while the air is brisk the sun sits high in the sky. If Handel had his way, they would have burned this five-acre field at Mason Farm earlier in the winter, but between Hurricane Florence in September and the two heavy snowfalls that hit Chapel Hill, the land was too wet to sustain a fire. 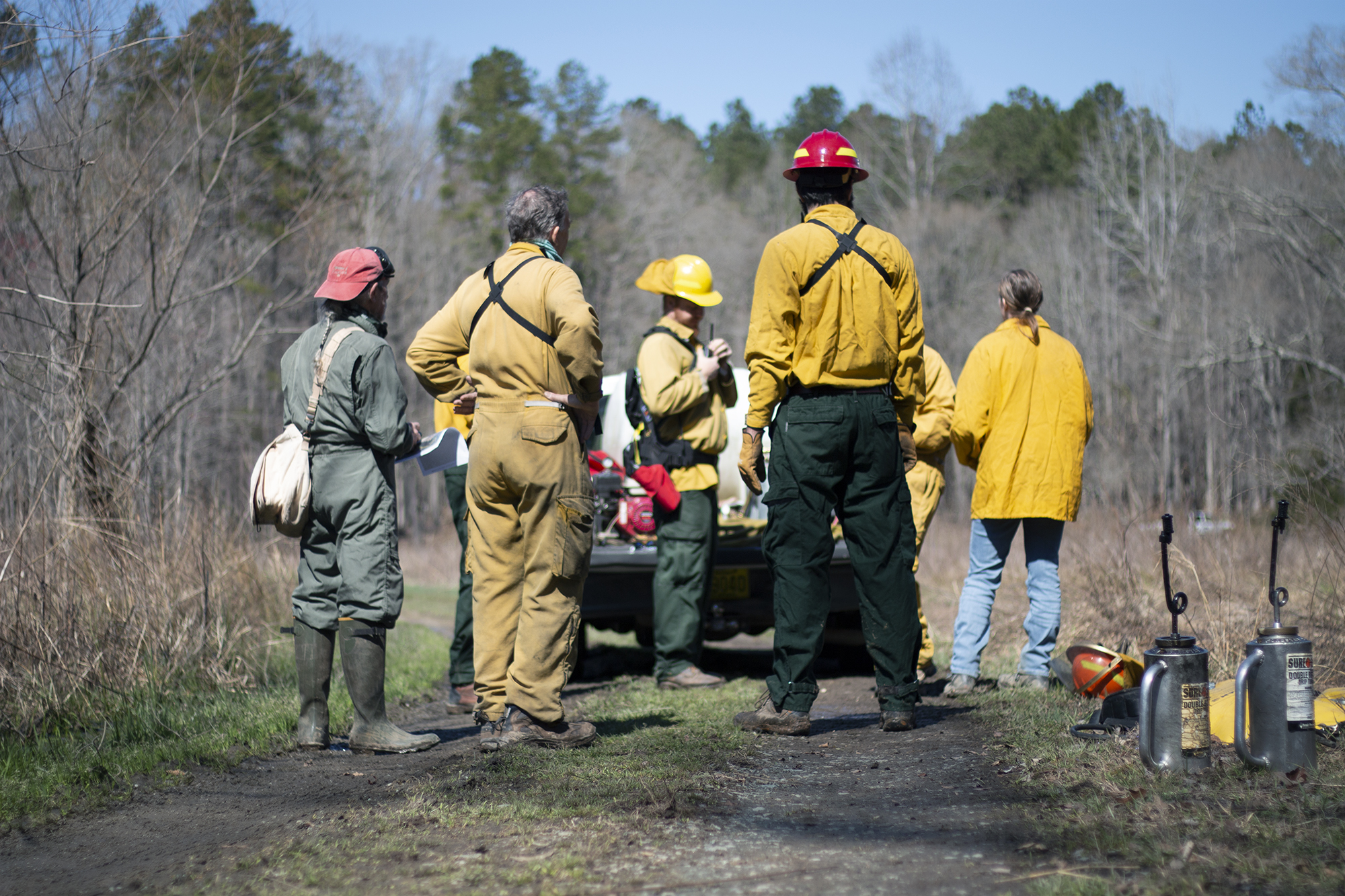 The crew reviews today’s strategy and safety protocols. Six of them work full-time at the garden; the others volunteer. Beyond the burn boss, two squad bosses manage ignitions along the fire’s control lines, with one on each side of the fire, while the rest of the team acts as spotters in case a fire escapes and needs to be extinguished.

To participate in a burn, crew members must have taken courses in firefighting training and wildland fire behavior. The garden does allow untrained volunteers to join them or observe the fire from a safe vantage point, but they must be paired with a trained staff member and can only assist with post-burn activities. 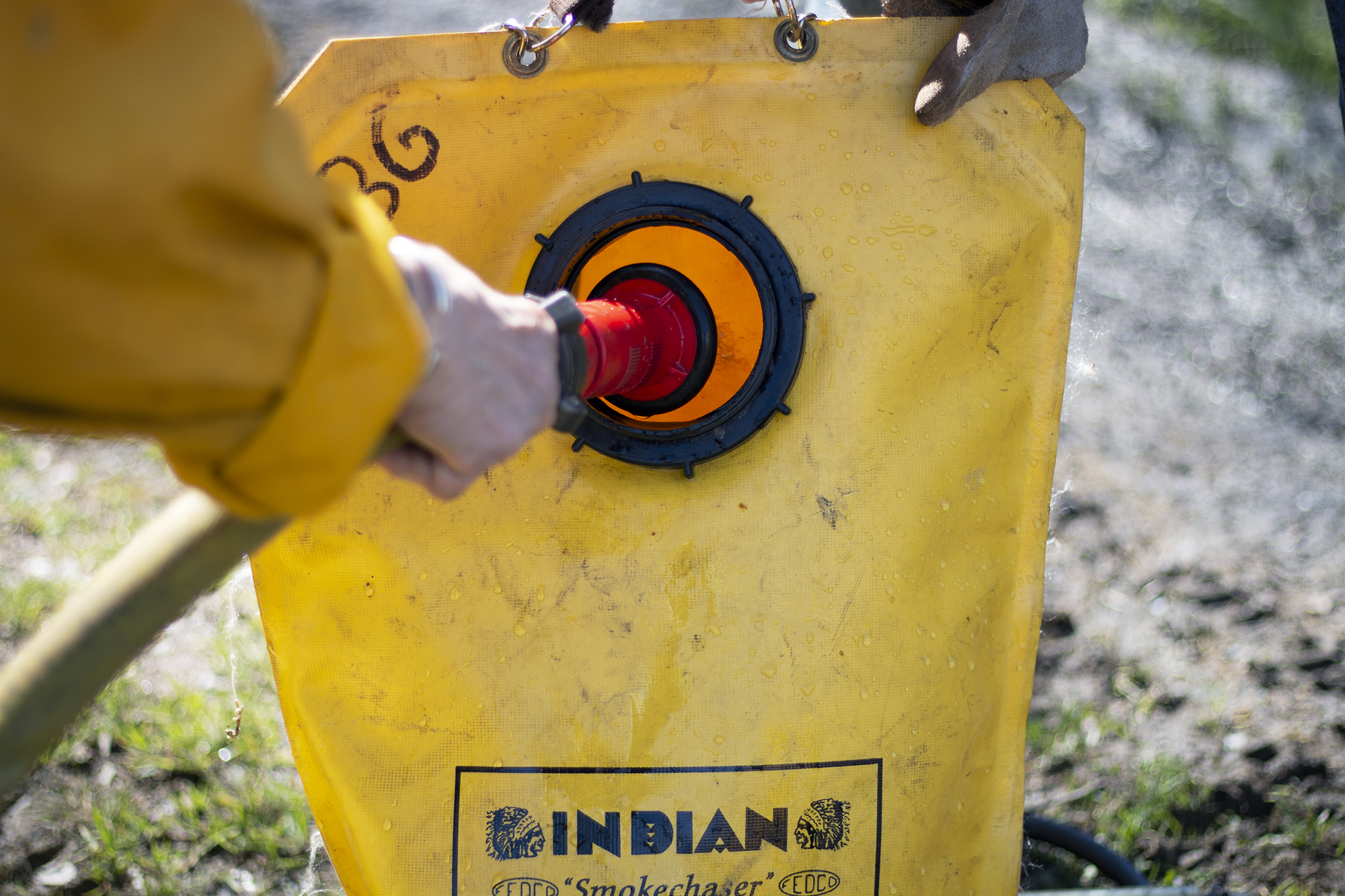 A few of the spotters wear bladder packs filled with water in case a fire escapes from the burn area. Other hand tools include rakes and leaf blowers to construct the fire lines, drip torches to light fires, and a truck loaded with a large water tank, pump, and hose. 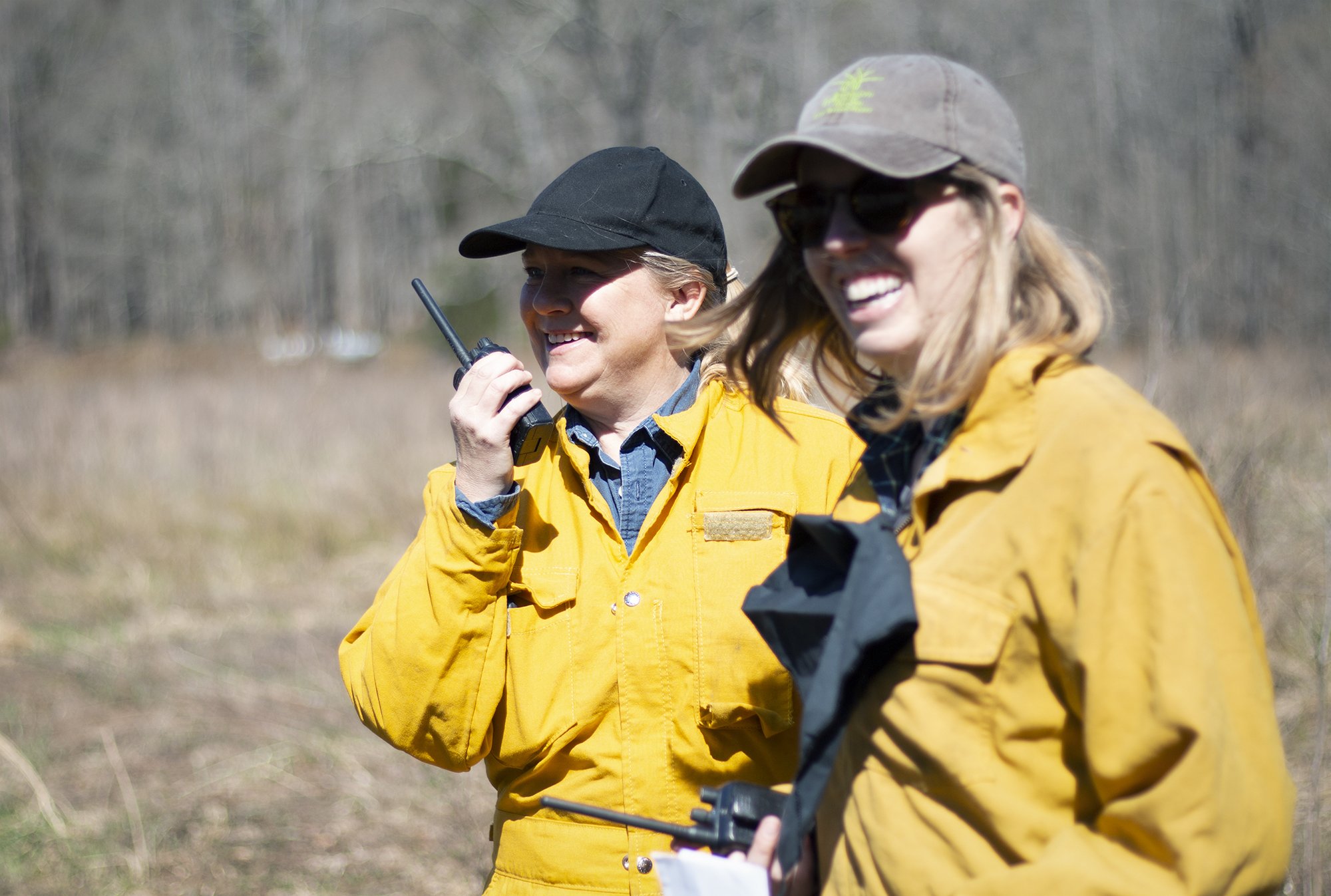 Ainsley Briggs, a horticulture technician at the garden, tests a handheld radio. Each member of the burn team carries one so that communication remains constant during the fire. 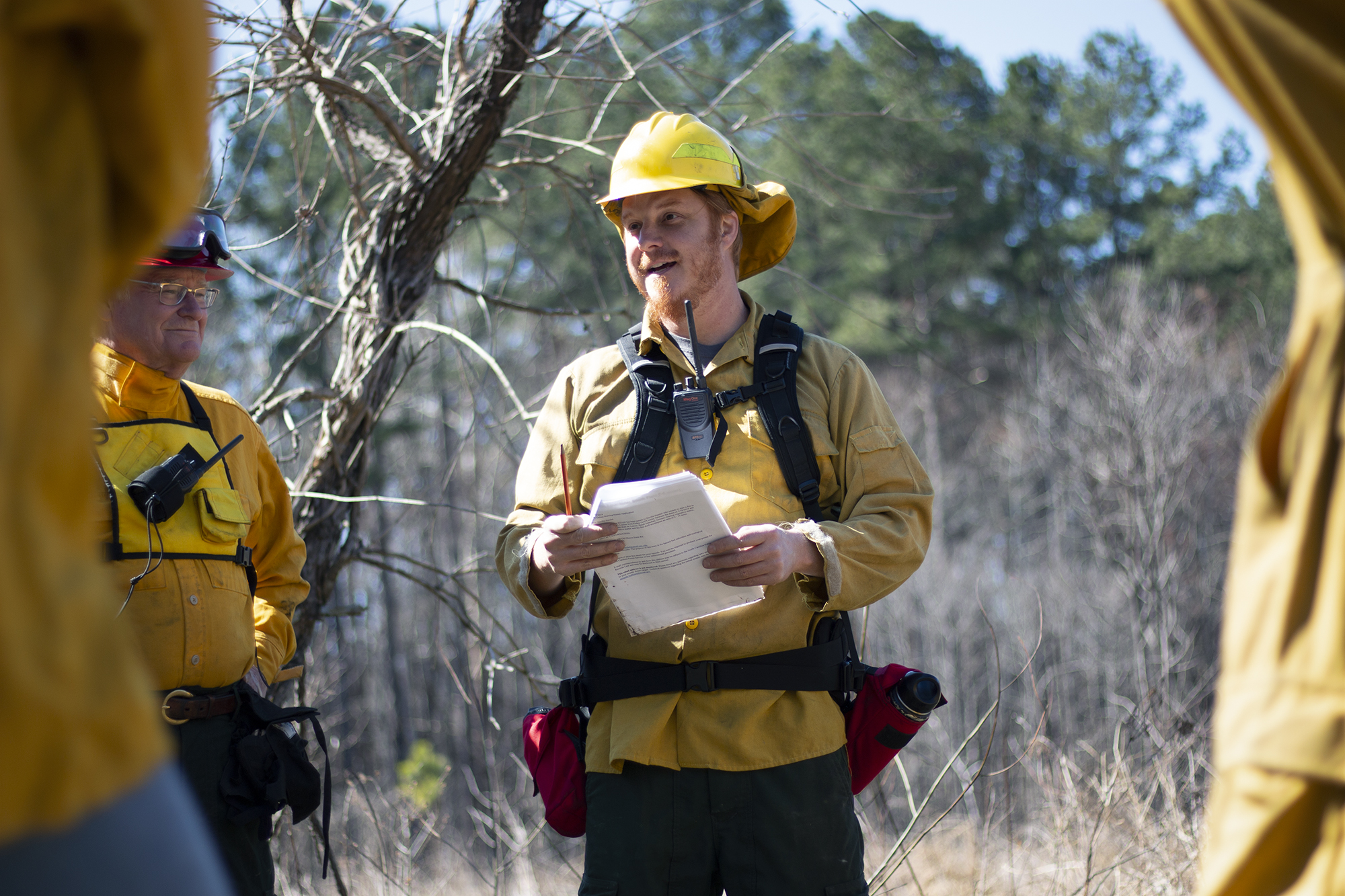 Handel explains that the day’s goal is to remove “dead fuels” — things like leaves and thatch — and to top-kill saplings to keep the field open. To meet these goals, timing is everything. Burning too early might not kill enough of the saplings, while burning too late could unintentionally impact critters like ground-nesting birds, amphibians, and reptiles.

“There are a lot of variables we have to weigh and then decide what to burn and when,” Handel says. “Our goal is always to try and mimic what Mother Nature would have done so that we are creating and maintaining habitat that is suitable for the species and communities that evolved in a fire-maintained Piedmont landscape.” 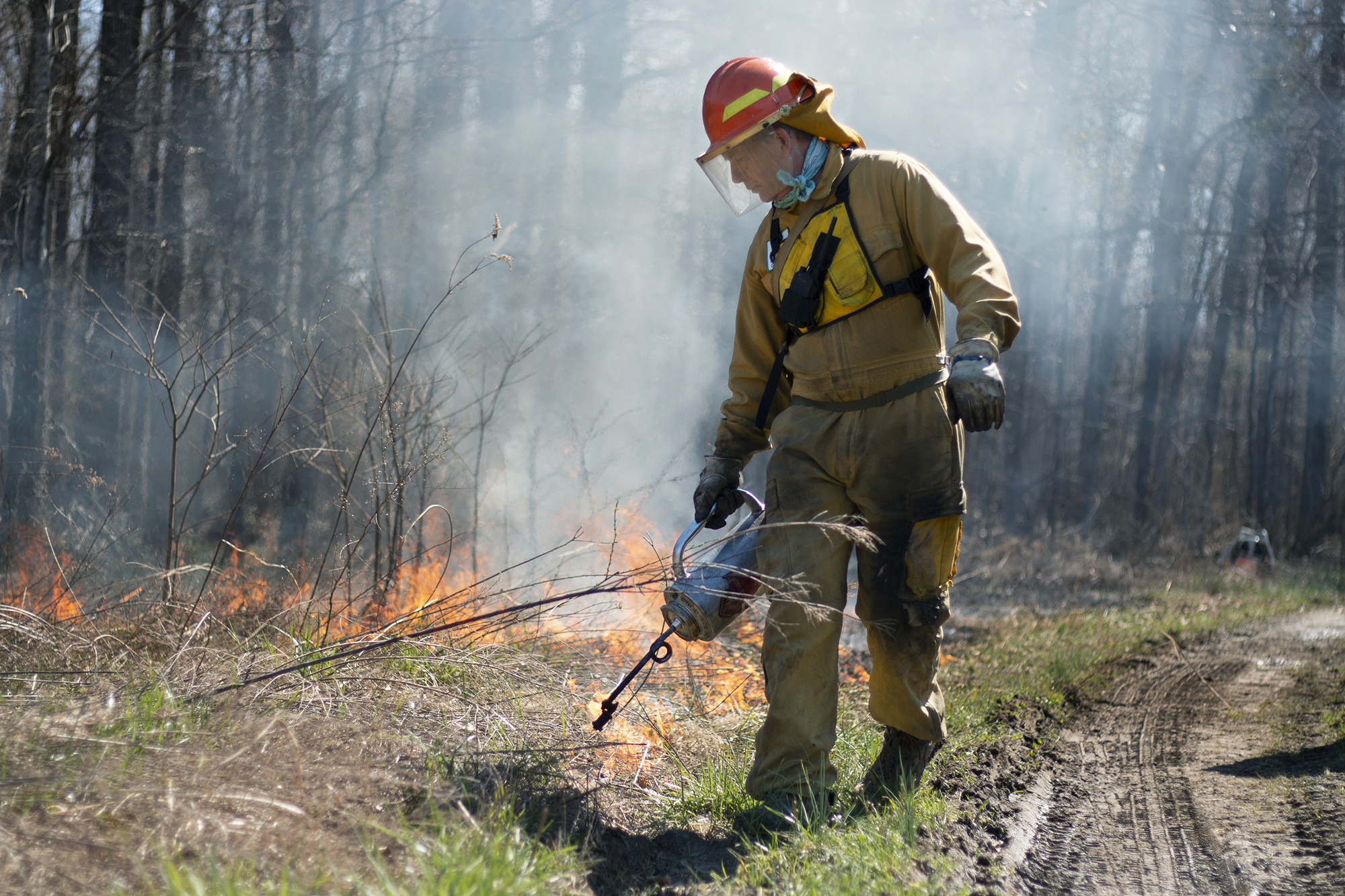 Johnny Randall, a squad leader and director of conservation programs at the garden, starts the fire by carrying a drip torch down the line. Fires are incredibly restorative for certain plants and fire-adapted trees, he says, and remove shrubs that tend to shade-out these species. Burns also reduce neighboring plant competition for seed germination and growth. There are even chemicals in smoke that induce seeds to germinate, Randall explains, and the influx of nutrients increases flowering. Some pine tree species, for example, have cones that only open after a fire. 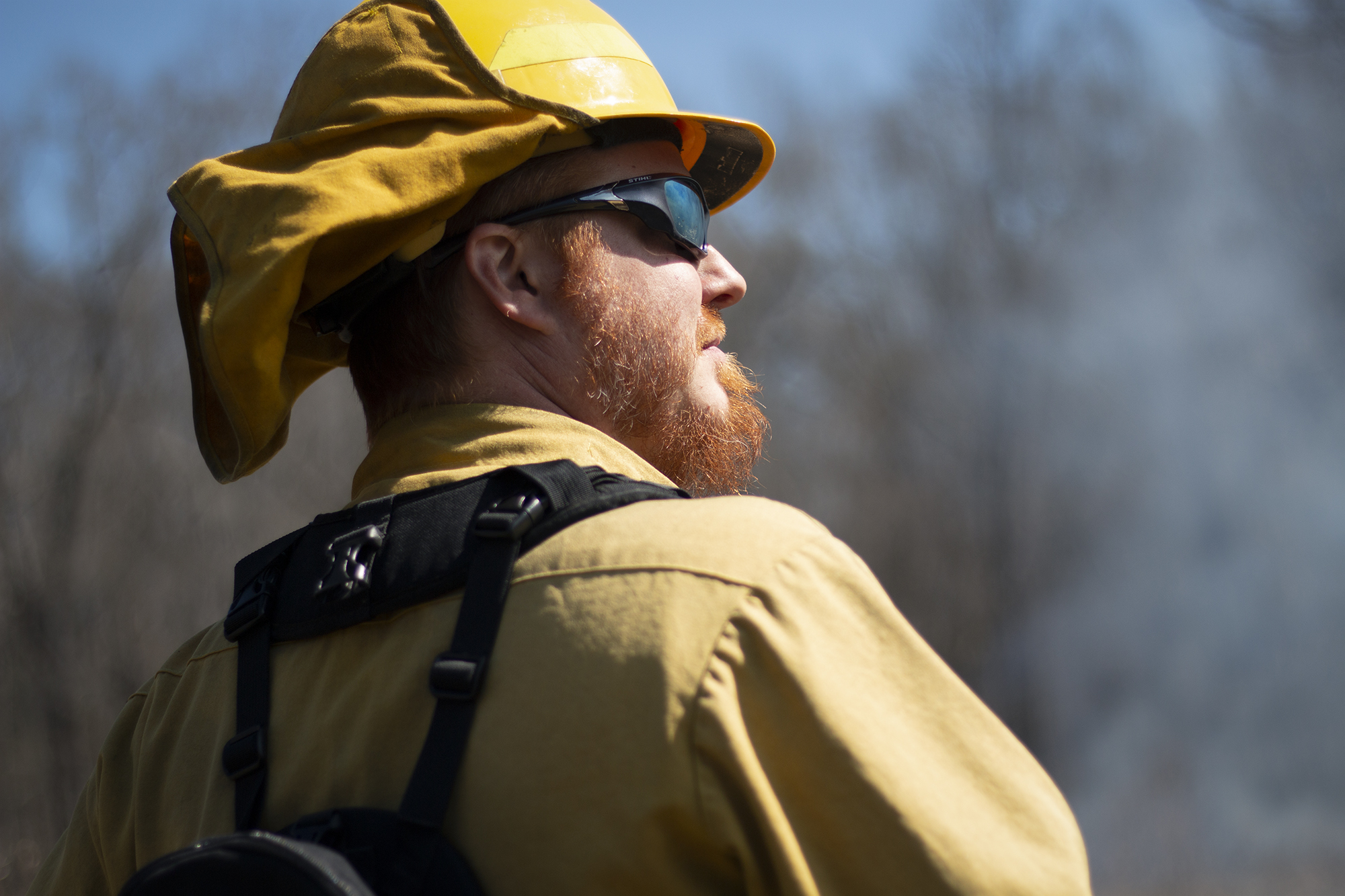 Randall started the garden’s burn program in 2002, and Handel took it over in the spring of 2016. “When you plan and run a successful burn, there is a real sense of achievement,” he says. “And when you watch the transformation the land undergoes after a fire, it’s very rewarding to know that your planning, leadership, and execution led to this positive ecological outcome.” 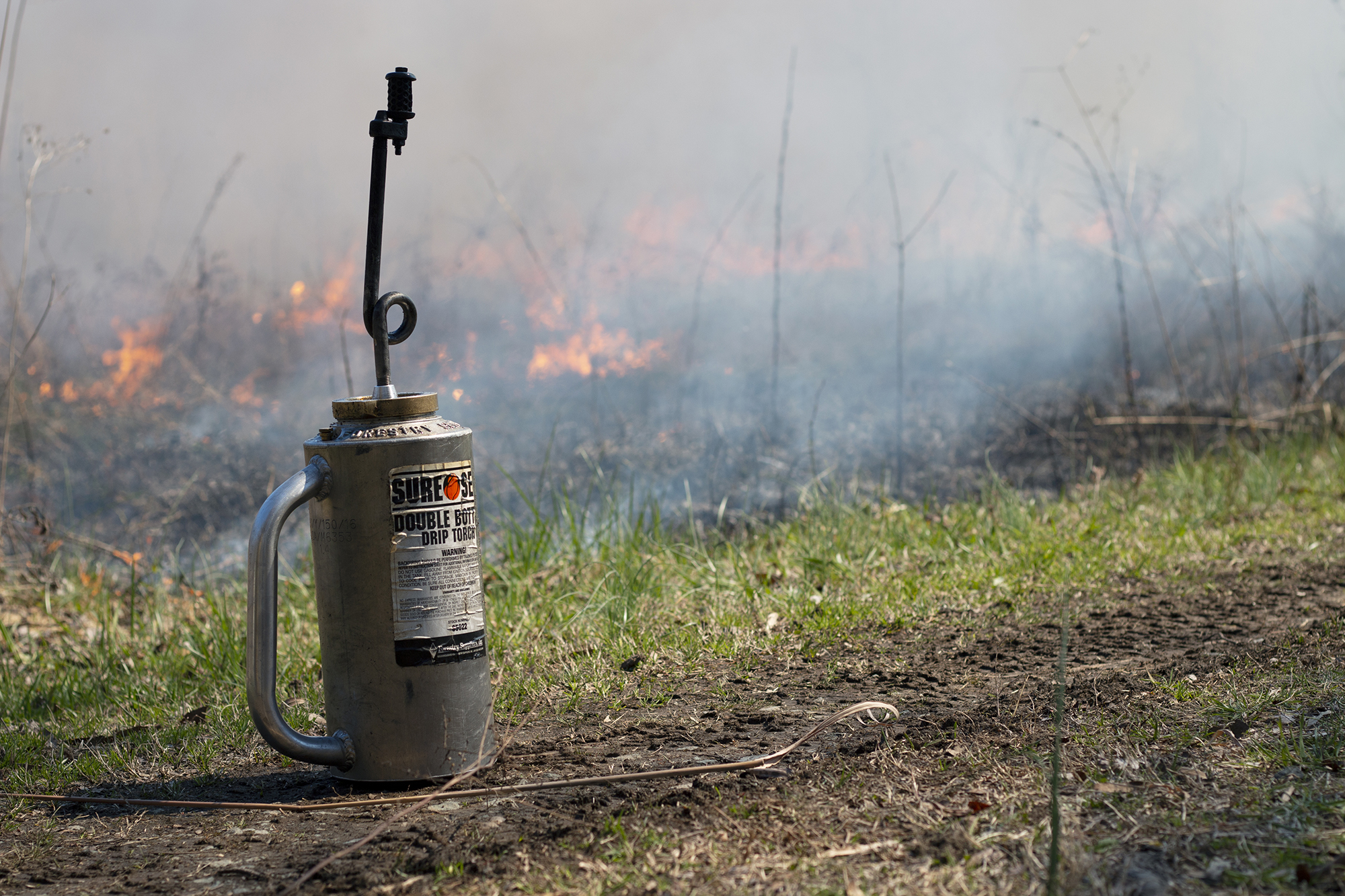 The loop on the spout of a driptorch prevents fire from entering the fuel canister. For large fires, variations of these torches are attached to off-road vehicles, used to start fires while driving along an ignition line. 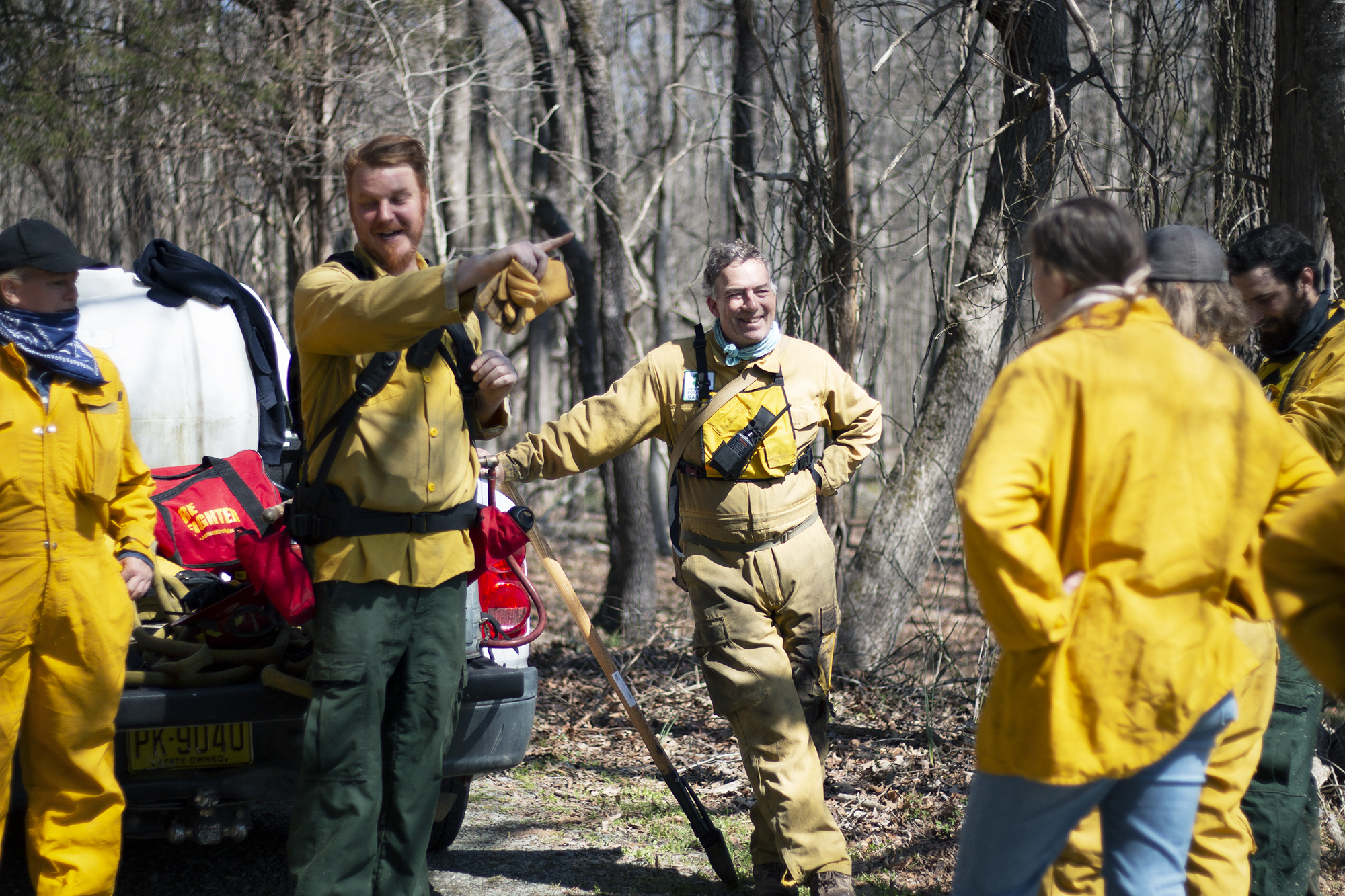 The team chats after completing a successful burn. “We are a small operation in terms of how and when we burn,” Handel says. “So we can be selective when we do it to maximize safety for us and the general public, and to get the effects we want out of our fires.” 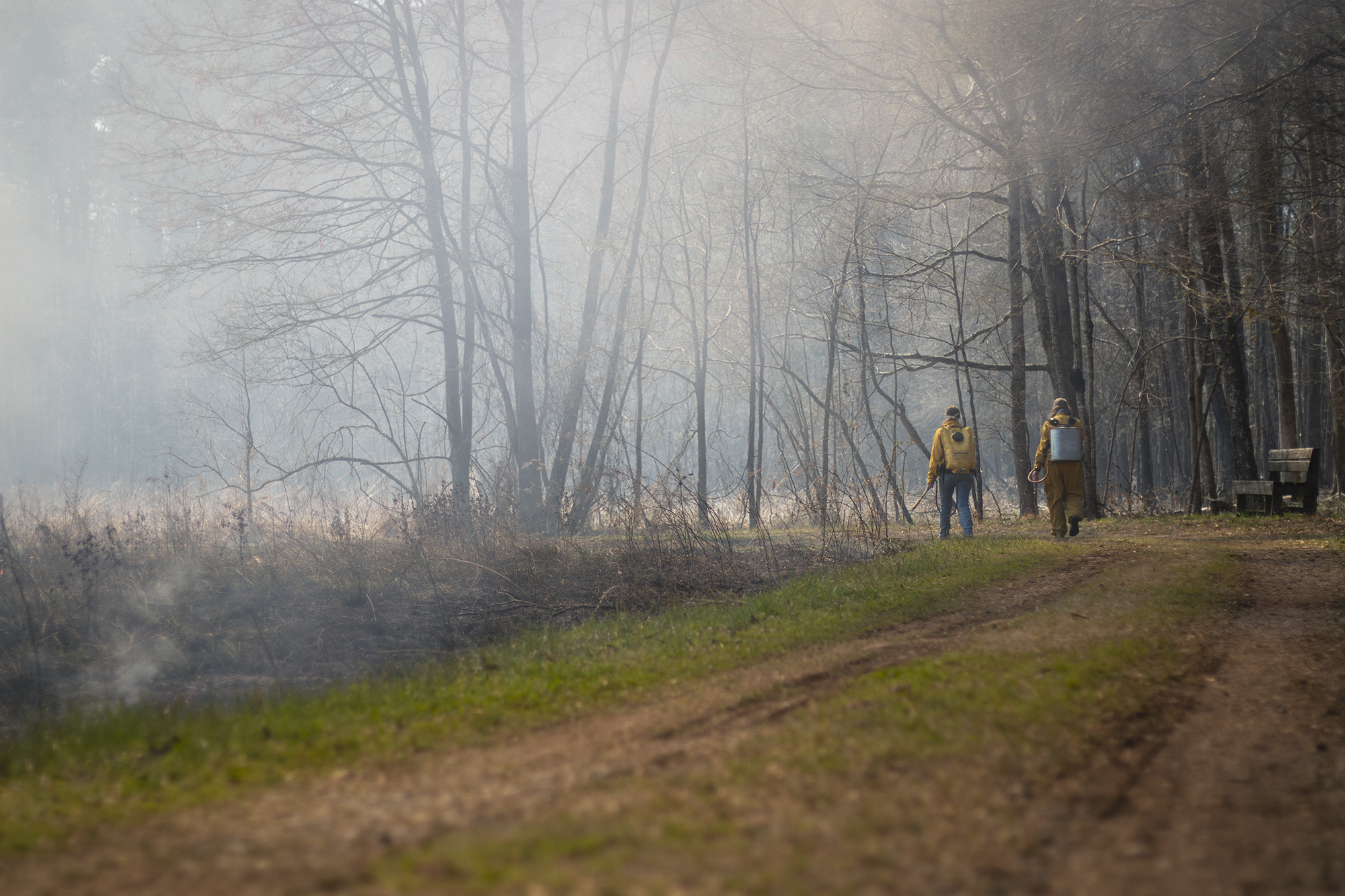 “Mason Farm is one of the gems in the Triangle,” Handel says. “What we are trying to do is manage this habitat in the best way we can — in a way that reflects what happens under natural conditions — and fire is one of the tools we use for that purpose. We want to maximize biodiversity of the native species that should be here.”

Neville Handel is the land manager at the North Carolina Botanical Garden.

Johnny Randall is the director of conservation programs at the North Carolina Botanical Garden.

Ainsley Briggs is a horticultural technician at the North Carolina Botanical Garden.