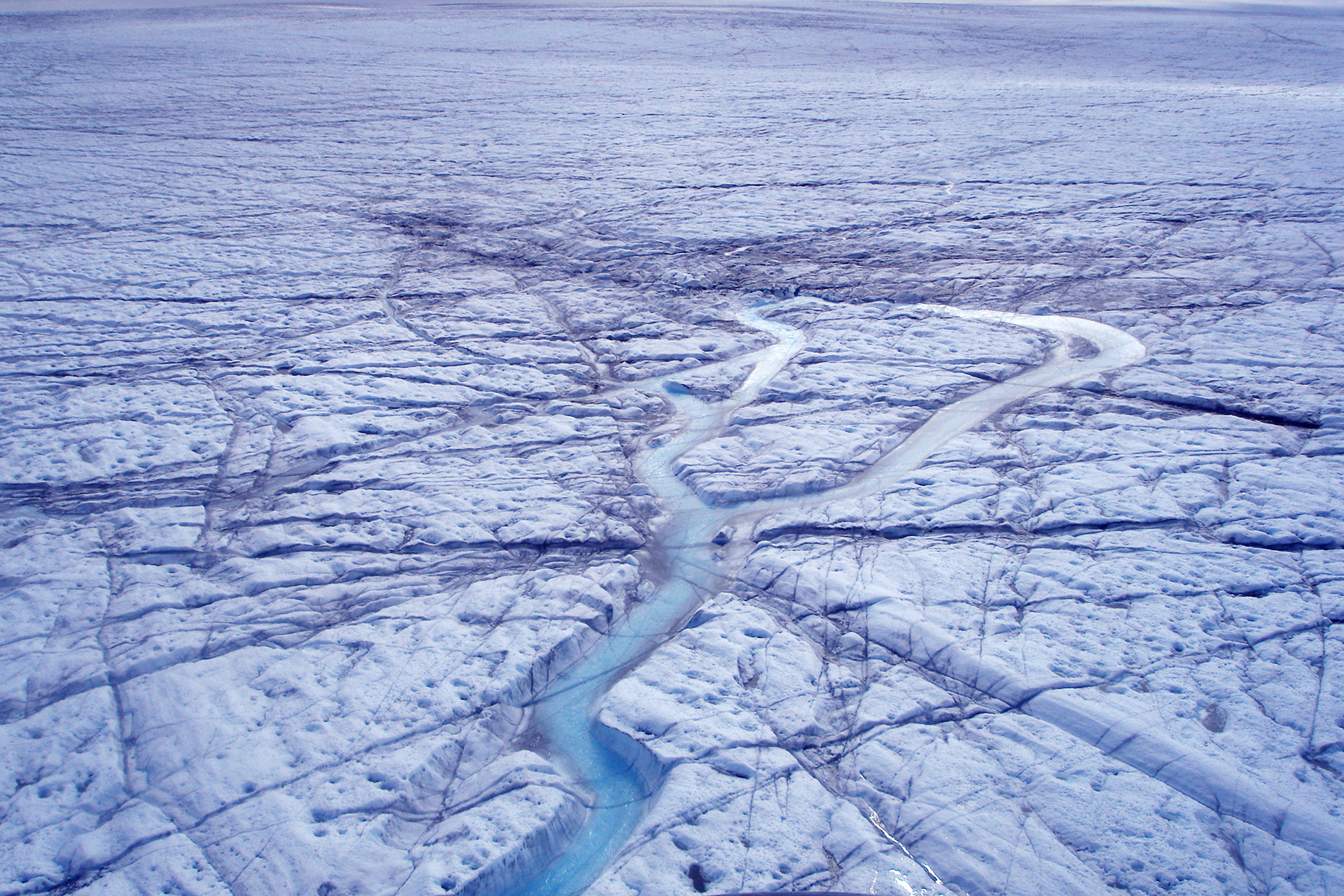 photo by José Rial
During summer in Greenland, snow melts and bare ice is exposed to the sun. Meltwater trickles downward until large rivers form, carrying the water through the ice sheet, weakening it, and allowing large volumes of ice to easily slide into ocean.
By Alyssa LaFaro
Earth

Each June, across North Carolina, the familiar twinkle of fireflies fills the evening sky. Slowly, one by one, these beetles emit a spark of light — a chemical reaction called bioluminescence. They flicker randomly until more and more of them gather together amongst the leaves. Then, an odd thing happens: They begin to sparkle in unison.

“Soon enough, the entire forest is going vroom, vroom, vroom,” José Rial explains. He holds his hands in the air and, together, they pulse back and forth. This coordination of events, called synchronization, happens every day, all over the world, in different ways — from the schooling of fish, to your cardiovascular and respiration systems, to the processing that takes place in your computer. Rial believes this also occurs between the North and South Poles.

“There is nothing new about the scientific phenomenon called synchronization,” Rial, a UNC geophysicist, points out. “But the synchronization of the polar climates is a little more of a novelty.” Using data from ice cores, Rial began comparing records from the Arctic and Antarctic in 2012. Looking at the temperature fluctuations over the last 120,000 years, he’s convinced that the North and South poles ‘talk’ to each other. “In fact, their climates dance with each other,” he says. “And the dance is relatively simple.”

Rial hypothesizes that the poles send signals to one another through the Atlantic Ocean, acting as one large telephone line between the two. But instead of electricity, the connection is fueled by a transfer of heat every 1,670 years. “Think of it like a clock,” Rial says. “Instead of marking every hour on the hour, it marks every 1,670 years.”

The ebb and flow

For much of Earth’s history, ice ages came and went about every 41,000 years, according to paleoclimatology research. But just 1 million years ago, that pattern changed and the periods of ice began to lengthen. Today, that pattern has stretched to 120,000 years — nearly three times as long — without any concrete explanations. Although this has baffled climate scientists including Rial, he’s more concerned about the fact that we’re currently facing the end of one of those 120,000-year periods.

During that time span, the North and South poles have experienced a pattern of abrupt warming followed by abrupt cooling, according to the climate records Rial obtained from polar ice core data. He points to a chart comparing the two, noting that the repeated temperature spikes equal approximately 15 degrees centigrade. “And we’re concerned about the 1-degree change that’s happened in the last 120 years,” he says. “Those 15-degree temperature changes probably happened in about a month’s time. If that were to happen today, it would be catastrophic.”

In the last 10,000 years, though, the unstable ice age pattern has disappeared and the temperature fluctuations seem steadier. Why? That’s the nature of our climate system — it’s nonlinear, meaning it’s full of surprises. “In a linear system, if you double the input, the output doubles,” Rial explains. “But in a nonlinear system, if you double the input you have no idea what the output is going to be.”

Assuming that Rial is correct about the poles synchronizing, though, there is hope to better understand how the climate patterns might change globally. But he continues to rack his brain about what exactly happened when the Earth underwent those 15-degree temperature changes so long ago. “Nature produced that phenomena without human intervention — so what will human intervention ultimately do?”

For miles and miles, a frigid white desert stretches across the horizon — a solid mass of ice and snow that makes up the Greenland ice sheet. But as summer advances, meltwater trickles downhill, accumulating in ponds and lakes and creating shafts in the ice that, sometimes, make the 3,000-foot trek to the bottom of the ice sheet. Today, Greenland moves approximately 150 cubic miles of ice to the ocean every year. 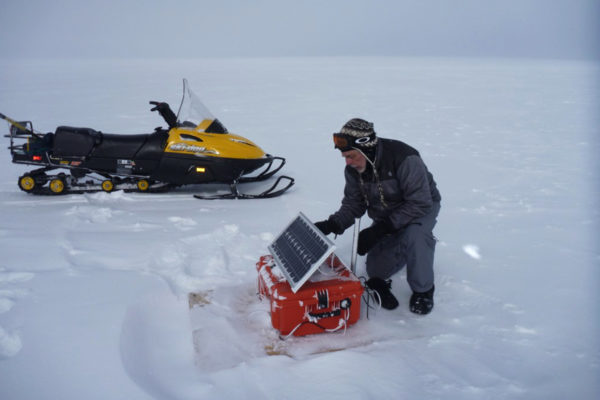 Rial checks on the network of portable seismometers that record sounds produced by Greenland ice as it cracks under the pressure of global warming. “The installation of the network is easy in nice weather,” he says, “but the extreme environment of the High Arctic creates a series of unexpected challenges.”

Rial spent five years (from 2006 to 2011) flying over the ice-covered country, hammering small seismic sensors all over the ice sheet. “I needed to understand the beast,” he says. “To see the glaciers, see how they move, see how they behave during warming seasons.” As the ice cracks it produces hundreds of micro-earthquakes — events that Rial recorded with seismometers to determine the location of major, growing cracks, which create large volumes of unstable ice.

“Seeing those icebergs come down,” he says — and pauses, at a loss for words. He switches to an analogy. These masses of ice work like buttresses in a cathedral, he explains, and if you take away the buttresses, everything comes crashing down. A collapse of the frigid slabs surrounding Greenland could potentially lead to a 2-meter sea-level rise — and change the climate for the entire planet. What happens to a world where the sea level has risen 2 meters (six feet)?

But Greenland isn’t the only player in this game — Antarctica is its ever-vigilant dance partner. As Antarctica warms, Greenland remains cold. That is, until the warming of Antarctica reaches a climax and begins to cool. At that very moment, the temperature in Greenland jumps up. “The polar regions are our global air-conditioning system,” Rial says. “And if that system begins to malfunction, then we’re in trouble.”

Imagine that, in the middle of summer, on the hottest, most humid day in Chapel Hill, your air conditioner breaks down. Then apply that concept to the ice caps. “Or, imagine the opposite,” Rial points out. “A very, very cold winter, where all the ice caps grow and grow and grow and eventually cover the entire planet. We need to understand how the climate system of poles interacts with the rest of the world’s climate to predict how that system behaves under the pressures of global warming.”

On the bright side

Rial admits that this research becomes grim at times — the unknowns overwhelming. So while he spends the next four years continuing to analyze ice core data with his research team, he’s also looking ahead toward a brighter future.

On the project website, a map of North America bursts with symbols representing the availability of energy sources in certain regions. Blue windmills surround ocean communities, while orange solar plants line desert regions. “The West, of course, has geothermal and solar energy,” Rial points to the map. “The United States, alone, has enough geothermal energy to power the entire country for the next 40,000 years.” Clean and sustainable, geothermal energy comes from the heat of the earth —the same heat that warms hot springs and causes magma to melt.

This isn’t just some dream — proof that these systems work exists, according to Rial. Just four years ago, the largest solar thermal power plant in the world began operation in California’s Mojave Dessert. The 377-megawatt Ivanpah Solar Electric Generating System uses mirrors to reflect the sun onto solar receivers atop power towers, generating enough electricity to power 140,000 homes during peak hours. What’s more, the facility will reduce carbon dioxide emissions by more than 400,000 tons per year. “This is just one indication that the United States is strongly committed to a carbon-free economy,” Rial says.

“Dr. Rial really makes you think,” UNC undergraduate Thomas Clerkin says. “He pushed me to consider all aspects of a problem, pushed me to get out of my comfort zone.” Clerkin spent a lot of time on NARNEA, researching cost and the pros and cons of renewable energy resources, comparing them to the use of fossil fuels. “I liked trying to solve these problems,” he says. “I felt like I was doing my part to fight climate change.”

“I cannot become depressed — even though there are a million reasons why I should,” Rial says. “We cannot give up. Ever. For each student that’s gone through the NARNEA Project, I can only hope I’ve planted a little seed. A seed that this is one possible solution.”

José A. Rial is a professor and the director of graduate studies for the Department of Geological Sciences within the UNC College of Arts & Sciences.

Thomas Clerkin is majoring in exercise and sport science within the UNC College of Arts & Sciences. He is a research assistant for the NARNEA Project.