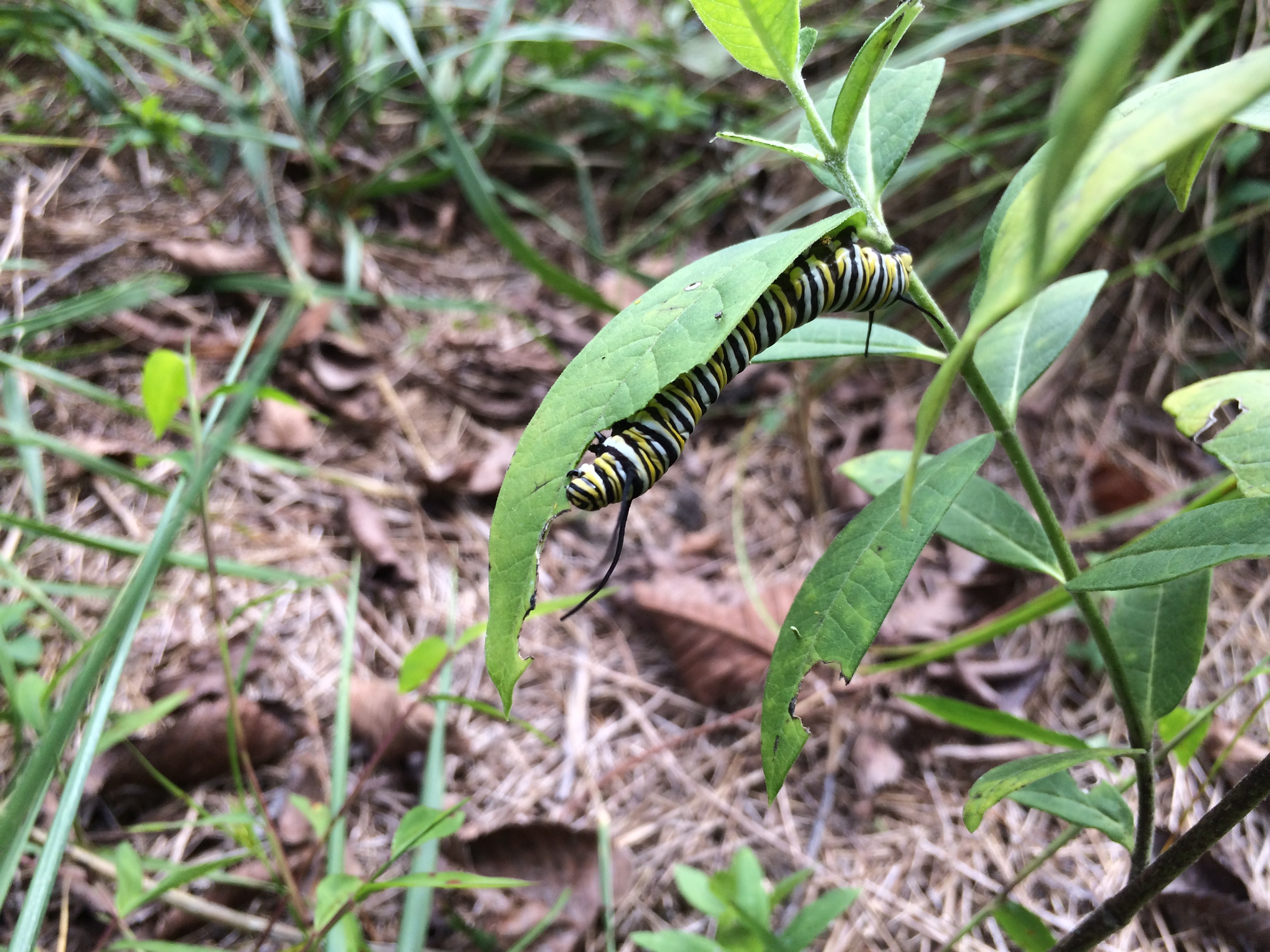 Photo by Amanda Faucette
A yellow-and-white striped Monarch butterfly caterpillar munches on the leaves of a milkweed plant at the UNC-Chapel Hill North Carolina Botanical Garden.
By Alyssa LaFaro
Earth

Each spring, the black-and-orange monarch butterfly lays hundreds of sesame seed-sized eggs on the leaves of milkweed plants. About four days later, a baby caterpillar small enough to fit on the head of a needle escapes from its shell. It eats its own egg shell and then rigorously chomps away at the milkweed leaves and grows quickly, shedding its skin each time it enters a new instar, or life stage. After attaching to a nearby twig, the caterpillar undergoes metamorphosis and two weeks later emerges as a beautiful butterfly. The process begins again.

Within the last decade, deforestation of overwintering sites (where monarchs migrate in the winter) in Mexico and California, severe temperature drops, excessive rain, and the decline in milkweed have caused population numbers for this iconic butterfly to plummet. “Biologists got a wakeup call in 2013 and 2014 when they saw a 90 percent decline in the monarch population in Mexico,” Damon Waitt, director of the North Carolina Botanical Garden, says. “We’re talking about going from 1 billion monarchs to just a few million.”

In response, President Barack Obama issued a presidential memorandum on pollinator health in regard to both the declining monarch and honey bee populations — honey bee pollination alone adds more than a $15 million value to the nation’s agriculture industry. The Botanical Garden has taken action by growing thousands of common milkweed, which monarchs rely on for growth at the larval stage.

The public cares a lot about these butterflies, but perhaps not so much for the milkweed they depend on. Milkweed has gotten a bad rap for being a pesky plant that overgrows its welcome, so, oftentimes, it’s sprayed with pesticides. “Farmers want to get rid of it,” Johnny Randall, director of conservation programs at the Botanical Garden, says. “But, mostly, I think land conversion — for range, for farming, for housing development — plays a big role in milkweed loss.” 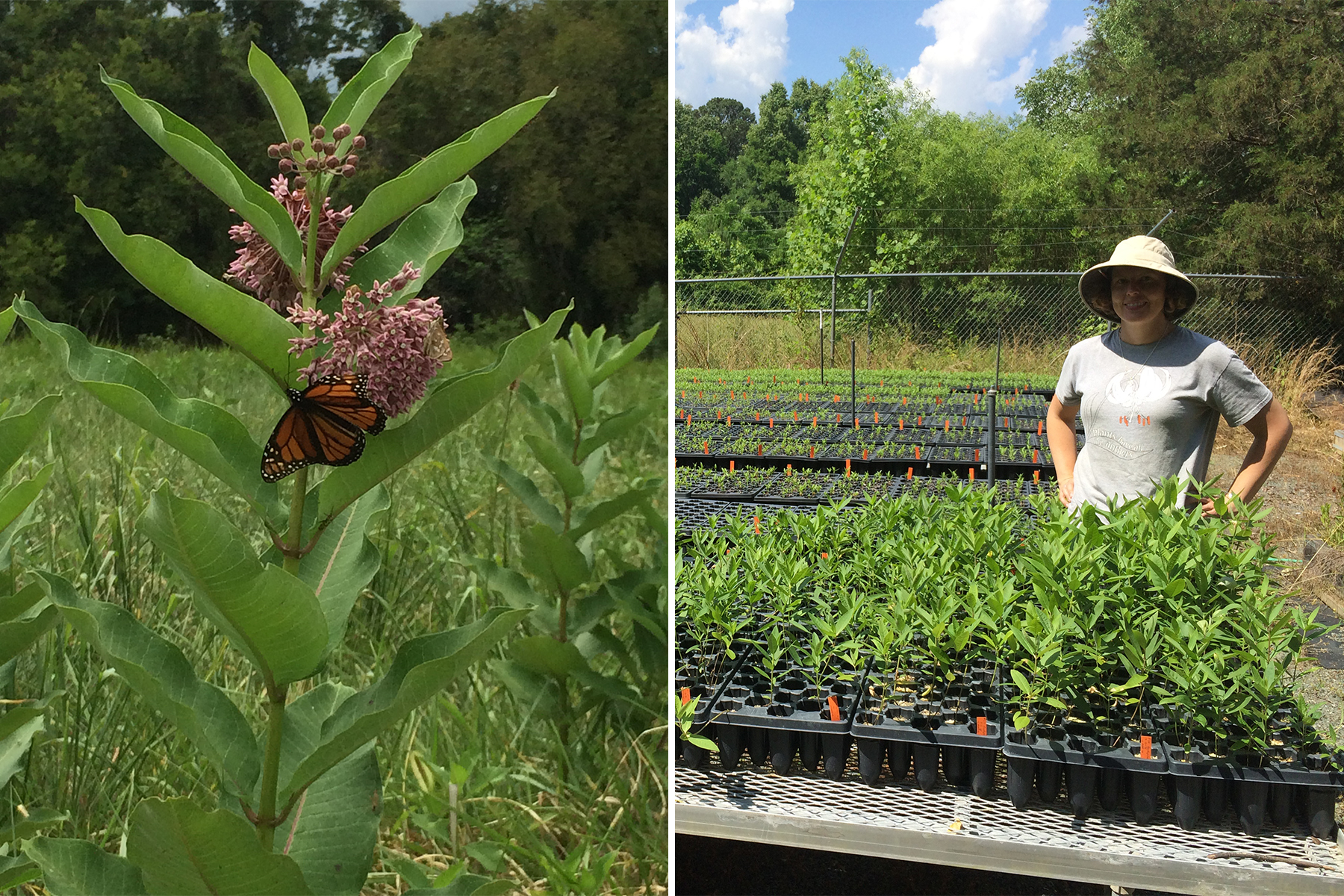 Two years ago, the U.S. Fish and Wildlife Service awarded a grant to the Botanical Garden to grow 7,200 milkweed plants. Conservation botanist Amanda Faucette, who’s leading the project, has grown mostly common milkweed because of its resiliency. This species of milkweed is rhizomatous, meaning it grows an underground stem that creates larger patches of the plant. “And it’s very tolerant of general human activities,” Randall laughs. “It tolerates disturbances like mowing and burning. If you plowed it up, it would probably spread more.”

It’s also packed with protective toxins that make monarchs unappetizing to predators, which also explains why they’re so colorful. “It’s called Mullerian mimicry,” Randall says. “That’s when an animal has very contrasting colors. It’s meant to be an obvious warning sign not to consume them. It doesn’t work for mammals very well since they don’t see color, but birds, for the most part, avoid them after they have sampled a couple.”

Monarchs have adapted so heavily to sequestering this toxin that it’s the only plant they can consume. “There have even been studies where researchers monitored female monarchs laying eggs on other plants in the same plant family and the caterpillars ended up dying after a very short period of time,” Faucette says. “Even though there are other plants in that family with similar toxins, it’s not the same.”

Not only do the monarchs require milkweed as a host plant, but the milkweed needs the monarchs for pollination. Monarchs pollinate hundreds of other plants as well, particularly flowers that are colorful, grow in clusters, remain open during the day, and feature flat surfaces for the butterflies to land on.

The Botanical Garden protects milkweed at various sites around Chapel Hill including Merritt Pasture within the Morgan Creek Preserve and at the Mason Farm Biological Reserve. Its partnership on this project with the U.S. Fish and Wildlife Service comes to a close this April, but the potential for a partnership with North Carolina State Parks looks promising.

Common milkweed doesn’t occur naturally in state parks within the eastern United States — and North Carolina State Parks wants the Botanical Garden to grow more appropriate milkweed species for them. “Milkweed naturally grows at the Mason Farm Biological Reserve, but we’re also planting it there, which means it will have enough milkweeds to be considered a seed increase site,” Randall explains. “That means we will be able to get seeds from our own property now to supply others who want to grow their own plants, rather than have us grow them all.”

More milkweed not only means more monarchs but more migration. Like birds, monarchs migrate thousands of miles each year. But it takes several generations for them to successfully disperse throughout North America. “That’s why we need relatively continuous milkweed populations,” Randall says. “It takes several generations to go north and then one generation comes back. But, really, they are important pollinators in both directions.”

Damon Waitt is the director of the North Carolina Botanical Garden. Before coming to Chapel Hill in January 2015, he worked as the senior director and botanist of the Lady Bird Johnson Wildflower Center in Austin, Texas.

Amanda Faucette is the conservation botanist for the North Carolina Botanical Garden.