Photo by Megan May
By endeavors
Society | Women in Science Wednesdays

Multiple things. Most prominently, I remember wanting to be a reporter and meteorologist. My grandpa had this abandoned piece of cardboard that I placed in front of a chair, and I would sit, read my fake notes, and pretend that I was on the 6 o’clock news.

In August 2014, there was a video circulating of a dead black boy’s body in the street hours after being pronounced dead. I paid no mind until I scrolled through Twitter later that night and witnessed what would be one of many digital protests for those lost to police brutality. Then, I turned the TV on and saw that no national news channels were covering the protests for Michael Brown. Returning back to my timeline, I noticed how people all over the world were able to get live accounts of the protest through the hashtags #Ferguson, #MichaelBrown, and #BlackLivesMatter. There was something dynamic about Twitter that drew black people to document their on-the-ground experiences — and this sparked my passion to research black digital communities. 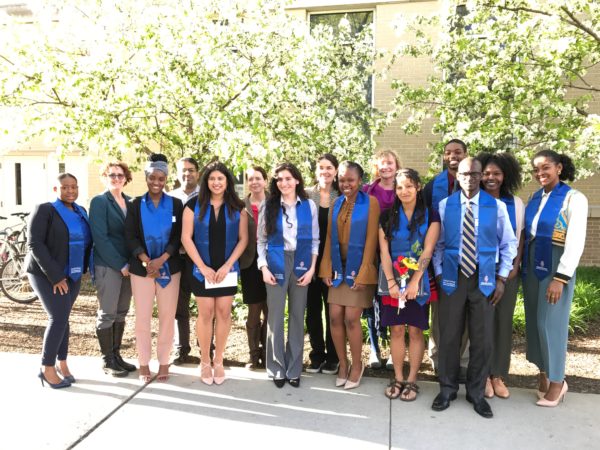 Childs (third from left) stands proudly with her fellow Ronald E. McNair cohort at her graduation from the University of Wisconsin-Madison.

Since a lot of my research is based on Twitter and hashtags, it can be really hard to collect tweets by simply favoriting them for later or screenshotting them. My first year here, most of my camera roll consisted of screenshots of possible research projects. I reached out to Deen Freelon in the School of Media and Journalism, and he told me it would be best to learn to code, even if my research is mainly qualitative. After a few warnings and big eyes that questioned, “a whole semester of coding?” I enrolled in the class. Although each assignment stressed me out and kept me up late, I learned how to code and collect big data, which has given me a lot of confidence towards my research on Twitter. Plus, I passed!

Cooking. I’m always hungry so it’s only right that I know how to cook for myself. It’s an art that I have not fully mastered yet but even getting new cookware excites me. Most importantly, I like to cook for my friends and get their stamp of approval. My favorite dishes are homemade street tacos and baked mac-and-cheese. Being in a PhD program is a daunting experience — or a marathon, as is often said. Outside passions are important because you need to have spaces and things that replenish you and give you the energy to complete that marathon.