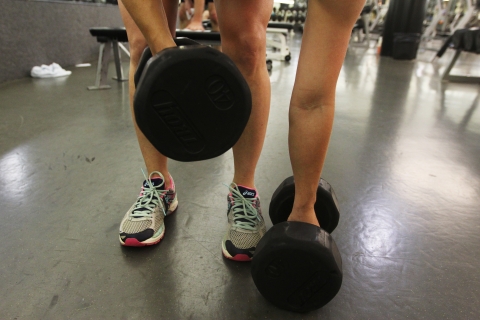 Photo by Mary Lide Parker
Doing squats with 80 pounds of weight is not something I ever thought I would include in my workouts. But according to new research from UNC-Chapel Hill’s Department of Exercise and Sport Science, this is the “best bang for your buck.”
By Mary Lide Parker
Health

Shaking. My legs are shaking. As I come up from my fourth squat, I carefully place two 40-pound dumbbells on the floor, and press the stopwatch on my phone. I wipe the sweat off my face and watch 30 seconds tick by. Then I pick up the weights and do four more squats. I’m just over five feet tall and weigh about 115 pounds—lifting three quarters of my body weight is not something I expected to incorporate into my gym routine. But I’m trying to lose some weight and increase my strength—right now I can barely do one pull-up. According to Abbie Smith-Ryan, a UNC expert in female physiology, this is the best way for me to get leaner and stronger.

My old routine at the gym involved several sets of 30 to 40 squats with about 20 pounds of weight. “If you lift heavier, you get a way bigger bang for your buck,” Smith-Ryan says. “You not only burn more calories during your workout, but when you’re done, your energy expenditure is elevated for the whole rest of the day so you keep burning more calories after you’re done exercising.”

Smith-Ryan’s lab looks at exercise and nutrition to improve body composition and overall health.  “We’re all about very practical and feasible approaches,” she says. “I think it’s really important to be able to deliver some sort of exercise intervention that people can actually do on their own.”

To begin, Smith-Ryan tested each woman’s initial strength, and used that as a baseline to set up their weights, making sure they were heavy enough. “We needed healthy people who exercised regularly because they were doing really high intensity training,” she says. “So they needed to have some experience in the gym—but not necessarily experience in doing this specific kind of training.”

Before the workout, each woman breathed into a mouthpiece for Smith-Ryan to measure their resting metabolic rate – the amount of energy, usually calories, needed to keep the body functioning. A high-intensity workout featuring leg and shoulder presses, bicep curls, lunges, and overhead triceps presses followed.  Each participant completed three sets of eight to 10 reps, with 30 seconds between each set and only one minute between each exercise – about 25 minutes total.

After, Smith-Ryan measured metabolic rates a second time, and then again at both 30 and 90 minutes post-workout.  “The idea is to work 80 percent of your maximum effort,” she says. The results showed that, even one hour after exercise was completed, participants’ metabolism remained high. Smith-Ryan also learned that the higher the intensity of a workout, the higher your metabolic rate. Thus, when practiced regularly, high-intensity exercise may be more effective at improving body composition — and in a shorter timeframe — than traditional exercise routines.

“Women are notorious for saying they’re just going eat less and exercise more,” Smith-Ryan says. “But that may slow down your metabolism, and result in fat gain.”

As women, we have more body fat, and we’re designed to use that fat for fuel, both at rest and during exercise.  “But due to the high carbohydrate intake that make up the majority of our diets, our bodies become inefficient at using fat for fuel,” Smith-Ryan explains. “This constant flux of carbohydrates in our systems blunts our ability to use fat for fuel.”

Eating a protein source prior to exercise can not only help you burn more calories, but burn a different type of calorie, according to Smith-Ryan. “It basically comes down to being able to use your fat stores during and after exercise,” she says. She structured her study to look at the effect of consuming a typical carbohydrate dose (like a granola bar) versus a protein dose (like some Greek yogurt) prior to a hard workout.

“We had them control their diet, but we didn’t change their overall daily intake,” Smith-Ryan explains. The participants fasted for three to four hours before coming in. Upon arrival, they either drank a 90 calorie carbohydrate shake, similar to orange juice, or a protein shake – a scoop of whey protein mixed with water.

Smith-Ryan found that protein does a much better job of allowing us to burn more calories (and more fat) both during and after exercise. That doesn’t mean we need to eat a huge protein packed meal before a workout—about 90 calories, like a handful of almonds, is all it takes.

When talking about “fat burning” Smith-Ryan is careful to stick to science, and avoid media hype. “There is a myth called ‘the fat burning zone’ that the media references all the time,” she says. “There is no such thing as a fat burning zone.” Another common misconception is that low-intensity, aerobic exercise, like walking for 30 minutes, will burn fat. “It’s better to complete a higher intensity workout for 10 minutes,” she says. “Even though you’re working out for less time, you’ll burn more calories during the exercise, and you’ll increase the amount of calories you continue to burn after you’re done exercising.”

“I just had a baby and the only thing I have time for is interval training,” Smith-Ryan says. “The cardiovascular, metabolic responses are just way quicker than any other approach.”

The exercise is simple: do one minute on, and then one minute off. Your “one minute on” can be anything—running, biking, swimming, or lifting. Go hard for 60 seconds—about 80 percent of your maximum effort. Then rest for one minute. Repeat 10 times. Thanks to these quick 20 minute workouts, Smith-Ryan says she’s in better shape than ever before.

“People often say they don’t have time to exercise and eat right,” Smith-Ryan says. “Well, if you can literally find 20 minutes three times a week – even if it’s just two times a week – it’s going to have huge benefits for weight loss and cardiovascular health.”

She also emphasized that altering your entire diet is unnecessary—just increase the protein intake. Most of us consume a ratio of carbs to protein at four to one. “So 400 grams of carbs versus 100 grams of protein throughout the day,” Smith-Ryan says. “If you bump that down and eat a two to one ratio, or a one to one ratio, that can change your body composition very easily.”

It’s certainly made a big difference for me. After two months of making a conscious effort to eat more protein, and lifting those big weights at the gym, I’ve lost a few pounds and gotten a lot stronger—yesterday I did 10 pull-ups in a row.

Abbie Smith-Ryan is an assistant professor in the department of exercise and sport science.