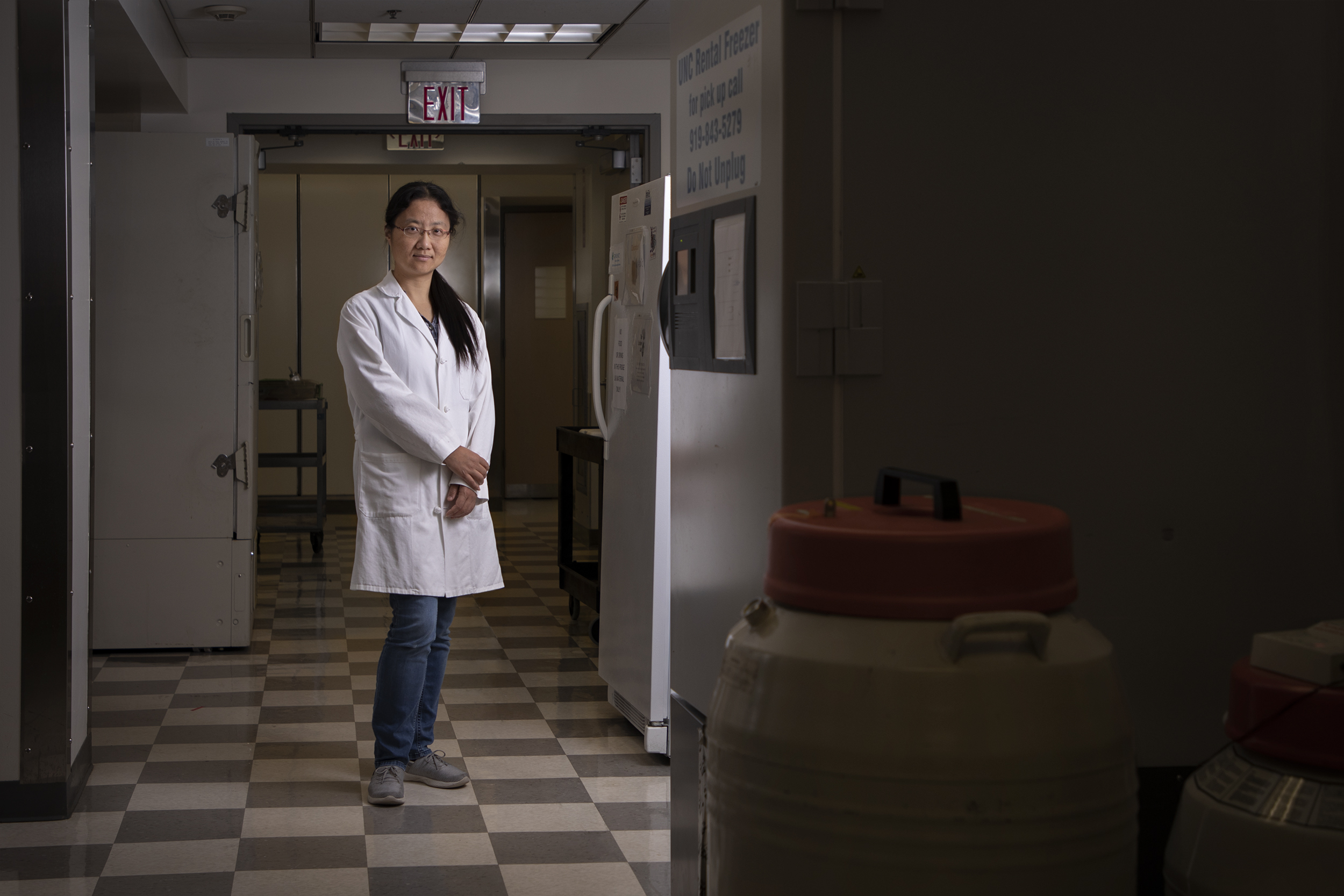 Li Qian is used to surprising people. When her revolutionary research on cardiac reprogramming first hit the science community, it was difficult for her to convince others of her findings.

“I still remember back before our first Nature paper, I talked about the study at international meetings and faced a lot of doubt — questions, concerns, and probably some suspicion. It was pretty tough. People’s attitude was, How could that be possible? This is too good to be true.”

No one doubts her now. The Qian Lab at the McAllister Heart Institute is changing the fate of damaged heart cells, transforming them from “non-beating” scar tissue cells into “beating” muscle cells. Qian’s interest in the heart can be traced back to the research of her PhD mentor, Rolf Bodmer.

When Bodmer, a University of Michigan neurobiologist, identified a critical gene required for heart development, he named it “Tinman,” after L. Frank Baum’s heartless character in “The Wizard of Oz.” When this gene is removed in fruit flies, they can’t develop a heart at all.

Reading about Bodmer’s tinman during her undergraduate studies in Shanghai, China, kickstarted Qian’s interest in developmental biology. While applying to graduate school, the University of Michigan was one of her top choices. When she was accepted and invited to join Bodmer’s lab, it was a dream come true, she says.

Now a researcher at UNC, Qian is building on Bodmer’s work and mentoring the next generation of heart researchers.

After a heart attack or cardiac injury, connective tissue cells called fibroblasts are activated to heal and repair wounds. The resulting scar tissue stiffens the heart and limits the organ’s ability to pump blood efficiently.

Qian’s lab recently published the success of a new method for altering the makeup of these damaged heart cells in humans. Using viruses as their messenger, they can send a cocktail of carefully selected DNA into a heart’s scar tissue, where they trigger the conversion of fibroblasts into healthy muscle cells.

This newest advancement is a result of years of lab work and decades of research. To find the right genes to activate inside of cells, Qian had to dig through 30 years of heart cell studies.

Ultimately, Qian identified the optimal ratio of three genes to do the job. In the lab, they’re programmed to make proteins, which need to be delivered to the damaged heart tissue. The courier of these protein-packed genes is a retrovirus, which replicates its DNA into other cells. In Qian’s petri dishes, the retrovirus inserts the genes into damaged cells. Within those cells, the programmed proteins get to work, and the fibroblasts get a serious makeover.

Qian began researching how to reprogram mouse fibroblasts 10 years ago as a postdoc. Her preliminary research was published in Nature in 2012 and ranked among the 2012 list of “Top 10 Advances in Heart Disease and Stroke Research,” compiled by the American Heart Association. That same year, she brought her research to UNC. Now, she’s an associate professor in the Department of Pathology & Laboratory Medicine and the principal investigator in her own lab, where she began developing her toolkit for mending hearts.

Her newest research made big headlines in the science world, but she says the attention doesn’t intimidate her.

“To me, it’s very exciting. I never feel like it’s scary or stressful,” she says. “Science is always advancing, and we have to embrace the newest technology and knowledge. For researchers and labs, staying at the cutting edge gives us the opportunity to push the field forward faster and, hopefully, helps us to find the right therapy.”

For Qian, precision medicine is the future. She believes that therapy should be individually tailored for patients.

Too good to be true

Qian’s success hasn’t come easy, and she tries to bring the lessons she learned as a PhD and postdoc to the trainees in her lab. Most importantly, she teaches that researchers must expect, accept, and learn from failure. With most experiments, she says, you spend a long time testing and optimizing conditions, rather than getting a result.

When her initial research faced skepticism from the science community, she took it in stride, and followed advice from her mentors.

“Instead of defending myself aggressively, I put every single question in my notebook,” she says. “We spent years designing experiments to answer them, one by one. So now when I go to meetings, I can tell the people, We addressed your question with a set of strong data.”

Advancements in technology have helped prove that the outcomes of Qian’s cellular reprogramming research isn’t just the result of contaminated cells. She feels that by addressing all the questions they can, her lab is advancing their field, and helping others understand their process.

“It was tough to face all these challenges, but I was lucky to have strong support from colleagues and mentors,” she says.

For now, Qian’s research on human applications is confined to human fibroblast cells in petri dishes. Human trials are far off but not unrealistic. The lab’s work has already shown that the heart function of mice can be improved significantly by the therapy. But the issues, Qian points out, are safety and efficiency.

“I think, for human patients, you do not expect that the heart function can be fully recovered,” Qian says. “But as long as it can recover to a certain extent, the patient can live a normal life”

While it will be a number of years before that’s a possibility, Qian is optimistic.

“I think, one day, you will be able to convert your skin cells, or any cells in your body, to another cell type.”

For her groundbreaking work, Qian recently received the Hettleman Prize for Scholarly and Artistic Achievement, given to junior tenure-track faculty members doing innovative research in their fields. She has also been commended for her dedication to mentorship. In 2017, she was awarded UNC’s Outstanding Mentor Award, becoming the youngest recipient ever to receive it.

Qian has a passion for helping students become great researchers. It’s a part of her research that she has come to enjoy more since she started her own lab, and she encourages her trainees to talk to her about anything.

“I help them solve problems. It’s my job to facilitate, train, mentor, and help, rather than to push,” Qian says.

Just as Bodmer influenced Qian to attend the University of Michigan, Qian is a big reason Benjamin Keepers, a second year MD-PhD student, came to UNC.

“She gets awesome people that make the lab culture really great,” says Keepers, who now works in Qian’s lab. “We spend a lot of our days discussing what we’re doing at the bench and bouncing ideas off of each other. I am super happy that I’ve got postdoc mentors I can learn a slew of skills from.”

Many students, even those outside of her lab, visit Qian for advice. As both a woman in the STEM field and someone who had children during her PhD and postdoc, she feels she can relate to them. She wants them to feel happy and fulfilled by their work in her lab and to make room for mistakes. To encourage this, she applies her personal parenting philosophy.

“I never push my kids to study hard or do something difficult in order to go to an Ivy League or get an elite job,” she says. “I encourage them to do something they love. So when I think about my trainees, I treat them almost like my own kids. ”

Keepers uses what he learned from Qian in his own mentoring of the lab’s undergraduates.

“Li gives a vision of the gaps in the field and gives us interesting, provocative questions and hypotheses that we might address,” he says. “She gives us freedom to answer those questions in a nuts-and-bolts way. Often through that open discussion, we come up with the best way to tackle a problem. It’s a great place to be and a great place to do science.”

Qian works hard to cultivate this dialogue of growth and collaboration in her lab and hopes to pass that torch onto future generations of researchers.

“That’s how the scientific field will continue to grow and move forward,” Qian says. “One day, we have to retire, and you need the next generation to do a great job.”

Li Qian is the associate director of the McAllister Heart Institute and associate professor in the Department of Pathology and Laboratory Medicine within the UNC School of Medicine.

Benjamin Keepers is a MD-PhD student in the Department of Pathology and Laboratory Medicine’s Pathobiology and Translational Science Graduate Program within the UNC School of Medicine.