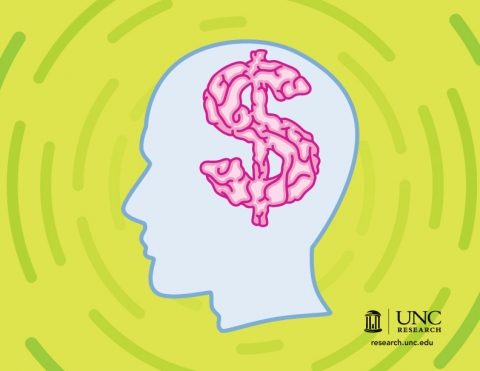 Illustration by Corina Cudebec
Neuroeconomics is an interdisciplinary field that brings together economics, psychology, and neuroscience in the study of human decision-making.
By Kelsey Ellis
Invention

In 1998, Camelia Kuhnen was checking off all the right boxes for medical school: a scholarship to MIT, a major in neuroscience, experience working as a research assistant. But halfway through her undergraduate degree, Kuhnen found her path blocked — as an international student, she couldn’t get a loan for medical school without an American co-signer.

She felt lost — until a friend suggested she add a major in finance. This decision landed her a job as an intern for Merrill Lynch on Wall Street, but Kuhnen still felt like something was missing. What she really wanted was to connect her work as an economist with her interest in the inner workings of the brain.

Today, in her office at the UNC Kenan-Flagler Business School, Kuhnen leans forward and clasps her hands neatly in front of her. Her voice, inflected slightly with the remnants of her childhood in Romania, is quietly intense. “I realized that there was a lot of overlap between what you need to know in the business world and in the world of neuroscience,” she says. “In both, you need to understand people and how they make decisions.”

When Kuhnen went back to graduate school for finance, she focused on that overlap. By working with neuroscientists interested in economics, Kuhnen became one of the first neuroeconomics researchers. This interdisciplinary field utilizes neuroscience to analyze how and why we make financial decisions. It’s an examination of the connection between economics and the brain that Kuhnen made herself, years ago.

Working at the forefront of a new field has both its benefits and its drawbacks. Insights into the biological basis for financial decision-making have attracted media coverage and public interest, but also some skepticism. “To be honest, it was a risky thing for me to do as a junior faculty member — to pursue this path — because it was a new field,” Kuhnen says. “Nobody knew if I was going to be able to publish any journal articles because they weren’t just neuroscience or just finance and economics — they were somewhere in between.”

This commitment to interdisciplinary work is evident in Kuhnen’s most recent neuroeconomics project, which examines how socioeconomic status influences the perception of financial opportunities. Kuhnen, animated and expressive, says it’s the most exciting research project of her career thus far. She’s found that people from lower socioeconomic backgrounds — people with less education, lower incomes, or who have encountered economic adversity — are more pessimistic about the odds that the U.S. stock market will yield a positive return than those who are wealthy.

This finding surprised Kuhnen. It means that even though they have no influence over whether the stock market will perform well, people with different life experiences come to very different conclusions in terms of their chances of making money through investments. Because of their past experiences, individuals from lower socioeconomic backgrounds were more likely to have a “glass-half-empty” perspective than an objective view.

“This is hugely important,” Kuhnen explains. “We talk about wealth inequality in this country — how we want to make sure that everyone has a fair shot to accomplish good things in life. But this difference in perspectives (or beliefs) is going to lead to even more wealth inequality.” People who don’t invest end up accumulating less money in the long run than those who do, and when this tendency is split along socioeconomic lines, it only exacerbates wealth disparities.

But why do people who struggle with economic adversity tend to be more pessimistic about potential investments? Kuhnen points to outside neuroscience research that shows that these individuals have become wired, biologically, so that they are more responsive to bad events and less responsive to good ones. The part of the brain that recognizes rewards doesn’t respond as intensely.

Gloomy news, it seems, for people who are already struggling to make ends meet. When you carry the legacy of past hardship within your cells, are you doomed to always see financial opportunities as “half empty?” Kuhnen doesn’t think so. Although economic adversity can rewire the brain, she believes that positive interventions can help people “override” their inclinations and make improved financial decisions.

Discovering what interventions best accomplish this is Kuhnen’s next goal. Education about personal finance, she thinks, might be one solution. This could include household finance classes for students in high school, or even elementary and middle school. “You can present information that will help people down the road, no matter what kind of economic adversity they’re faced with,” she says. Such programs could help people have a more objective view of what they can achieve.

“You need to level the playing field,” Kuhnen insists. “Reframe the way they see the world as a world of opportunity rather than a world of disappointment.”

Camelia Kuhnen is an associate professor of finance in the UNC Kenan-Flagler Business School.