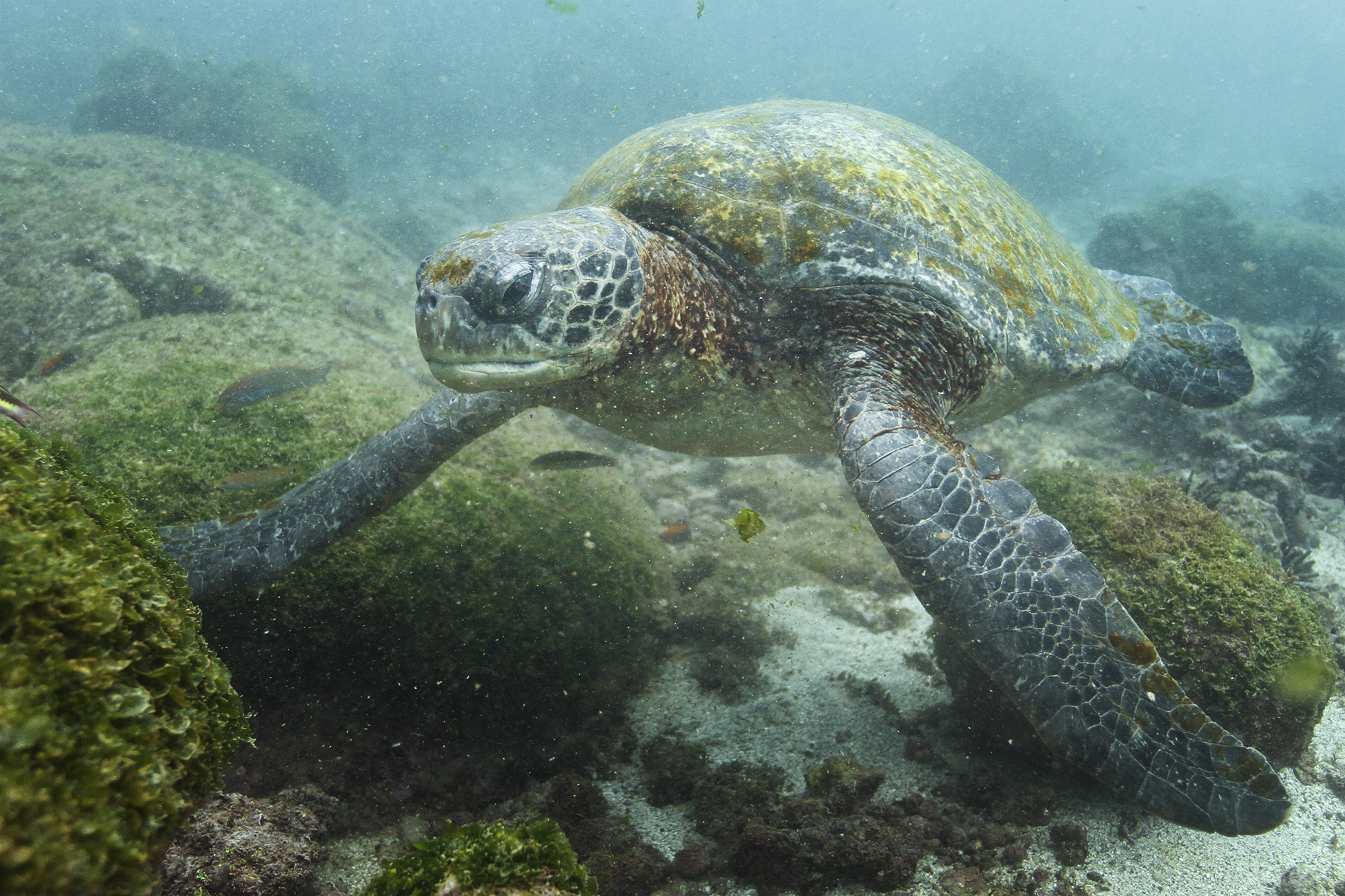 Sea turtles are one of many species of animals known to use the earth's magnetic field to navigate (photo by Mary Lide Parker).
By Megan May
Earth | Invention

The common field ant can carry 5,000 times its body weight. The impala, a small African antelope, can jump almost 10 feet — two feet higher than the human world record in the high jump. The albatross, a large sea bird, can go years without touching land.

Brian Taylor learned to appreciate animals’ extraordinary capabilities after taking a biorobotics course during his senior year at Case Western Reserve University. The class focused on using robotics and engineering to better understand animal behavior, combining it with physiology as inspiration for improving engineered systems. 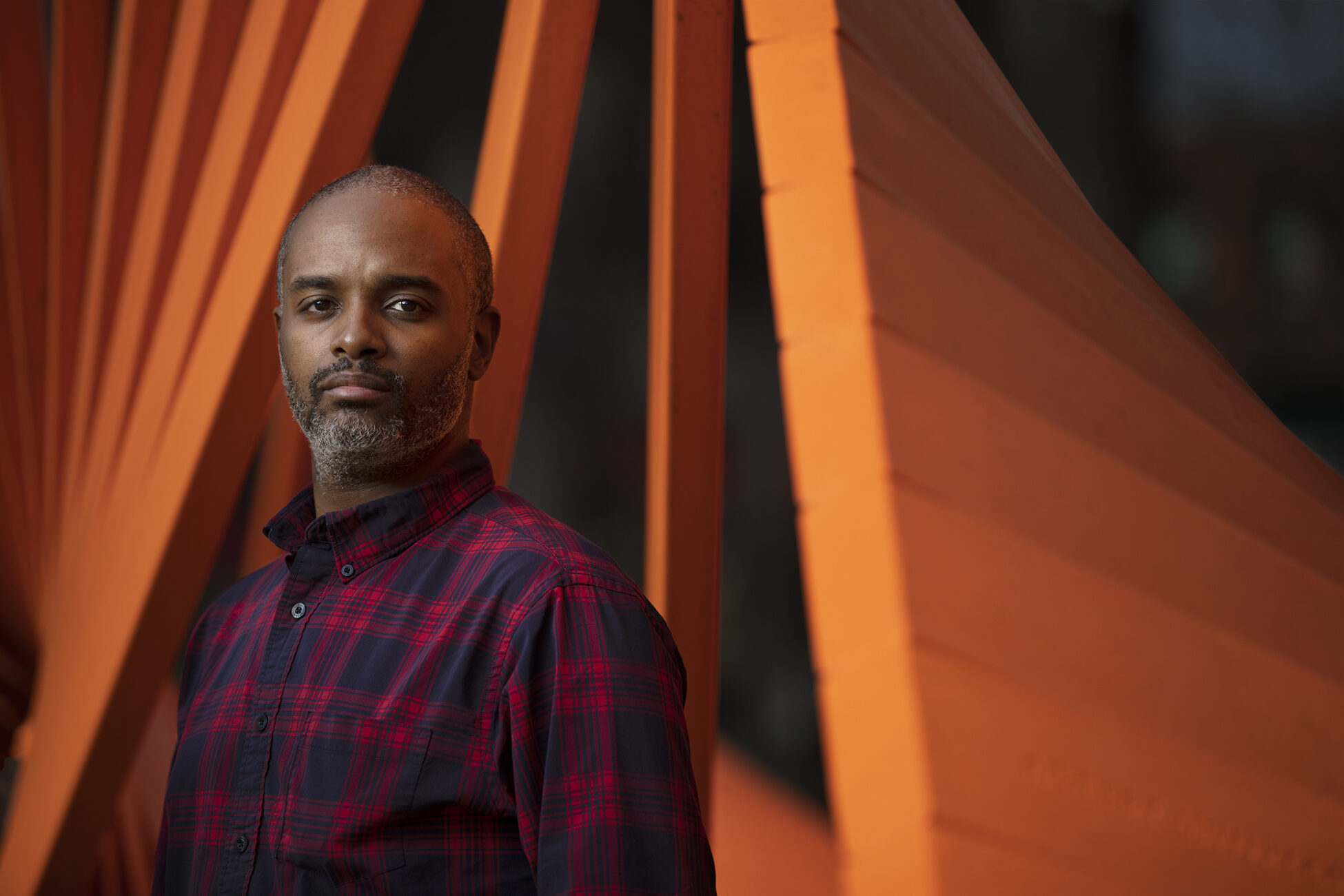 Using computational and robotic simulations, Brian Taylor’s lab studies how animals use the earth’s magnetic field to navigate. (photo by Megan May)

Today, the UNC biological engineer studies magnetoreception — how animals use the Earth’s magnetic field for orientation and navigation. Sea turtles return to the beach where they hatched to lay eggs. Whales and fish migrate across oceans. Frogs sense the nearest shoreline in the face of danger. These are just a few examples of animals with this capability.

Using techniques like computer simulations, robotics, and motion capture, the Quantitative Biology and Engineering Sciences Laboratory seeks to better understand magnetoreception in order to improve navigational systems. While GPS is a valuable tool, it has its faults — satellite signals can be weak, hackers can infiltrate the system, and navigation doesn’t work well underwater. By understanding and harnessing the power of Earth’s natural compass, Taylor hopes to remedy these pitfalls in humanmade navigational systems.

The mystery of magnetoreception

The earth can be likened to a giant magnet that creates a shield against solar wind and radiation. Certain animals sense this field and use it like an internal compass.

While the idea of magnetoreception has been around for decades, exactly how animals use it is largely still a mystery. 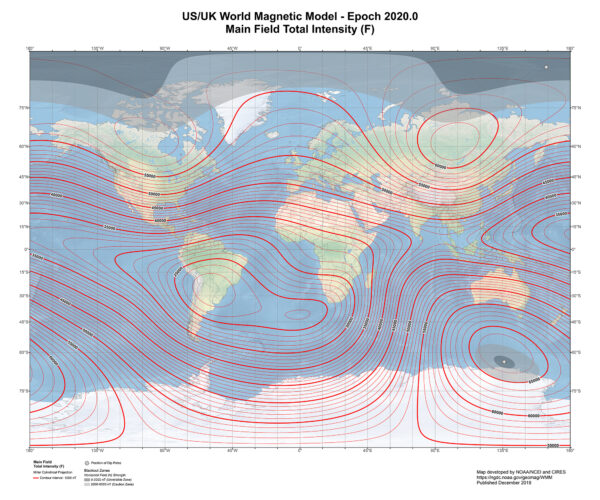 Some animals use the earth’s magnetic inclination and intensity to navigate (image by NOAA).

Two hypotheses stand out, he explains, both with evidence for and against them. The first theorizes that a chemical reaction occurs within the animal’s eye that influences their sense of direction. Some animals have a protein in their eyes, called cryptochrome, which allows them to “see” the magnetic field. This theory, though, doesn’t account for animals that can navigate in the dark, and cryptochrome experiments have yielded positive results using magnetic fields much stronger than the Earth’s.

Another notes that magneto-receptive animals have iron particles, called magnetite, in their body. Think of it like tiny magnets in cells, Taylor says. When that magnetite is influenced by the magnetic field, it might tug on different types of receptors or trigger signals within the body. The difficulty here, though, is that researchers don’t understand where these receptors are located, or how that information physically translates into sensory information.

That pursuit of the unknown keeps Taylor hooked.

Think of it like driving a car, Taylor says. In theory, if you take your hands off the steering wheel while in motion, the car should stay straight. But in reality, the car will slightly veer off its course. Even if the car is perfectly tuned and aligned, the imperfections in the road will influence its direction. In this case, the computer simulation is what the car should do, yet the robotic simulation mirrors what occurs in real life.

“Computer simulations are wonderful, but they’re kind of doomed to succeed because you can always tune the simulation to make it work,” he says. “You can capture a lot through computer simulations, but robotics help you take into account gravity, friction, air currents, things like that.”

A project trying to encapsulate these real-world conditions explores the idea that sea turtles can detect both the magnetic angle and intensity to navigate. By inputting a variety of parameters into the computer simulation — like swimming and ocean current speed — the team is not only studying if turtles use this strategy, but also under what conditions this strategy does and does not work. On the robotics side, Taylor’s lab uses Roombas to verify the hypothesis posed by the computer simulation.

A computer simulation from Taylor’s lab shows a simplified version of a turtle navigating in the Northern Atlantic Ocean. The location of each point was chosen to resemble a point that would be along the migratory route of a hatchling loggerhead sea turtle. This particular video illustrates that inclination and intensity of the earth’s magnetic field can be used to navigate to a series of points that a turtle might visit.

This past fall, Taylor, UNC biologist Ken Lohmann, and Duke University biologist Sönke Johnsen received a $2.5 million grant from the Air Force Office of Scientific Research to study a variety of areas of magnetoreception.

Over the course of the next five years, the Lohmann lab will be conducting experiments with sea turtles to try and determine the sensitivity of the animals’ magnetic receptors. They will also use neuroscience approaches to investigate magnetoreception in fish. Johnsen’s work looks to apply big data analytics and computational techniques to study migratory paths of marine animals tracked with satellites, considering factors like ocean salinity, air temperature, and magnetic field charts to uncover patterns hidden to the naked eye.

Taylor’s contribution will mirror his day-to-day research exploring magnetoreception capabilities found in nature to verify current hypotheses and generate new ones. The technique of trial and error is as old as science itself, but it’s something Taylor doesn’t tire of.

“When you try something and you actually get it to work and it does what you think it’s supposed to do, that’s a very good feeling,” Taylor says. “But it could also do something you completely did not expect but is still interesting. That’s also a really good feeling because it opens up more doors. It allows us to ask more questions.”

Brian Taylor is an assistant professor in the Department of Biology within the UNC College of Arts & Sciences.